Easter in Rome 2022: a guide to the Rome Carnival & Ash Wednesday

Easter in Rome 2022: the Rome Carnival & Ash Wednesday – what to expect

Curious about the Carnival in Rome and Ash Wednesday? Read on for a full guide to the start of the Lenten season in Rome.

Easter weekend in Rome is the culmination of an almost 14 week cycle of traditional feasts, seasonal food culture and local customs. Religion supplies the tent poles, but the fabric around it is much gaudier, often focused on food and fun for the majority, rather than abstinence and worship.

In part one of a two-part post about Easter in Rome 2021, I describe what to expect from the Rome Carnival festivities and Ash Wednesday in Rome at this enjoyable and richly diverse time of year. Part two of this post, Easter in Rome 2021: a Guide to Holy Week including Good Friday and Easter Sunday, is here.

In the days and weeks before Lent, which begins on Wednesday March 2 in 2022, and ends on Thursday April 14 2022, the traditional period of abstinence is prepared for by a kind of extended party – La Carnevale or Carnival.  From Latin roots, the term literally means ‘a farewell to meat’, although has come to imply a kind of final blast of fun and excess of any kind before the Christian period of penitence.

While technically Carnival weekend is the Saturday and Sunday preceding Ash Wednesday – February 26 and 27 in 2022 – in many cities this drags out much longer. Local tradition in Rome sees sweet treats associated with the Rome Carnival start to creep into bakeries and coffee bars from the end of January. Usually set aside on the counter or proudly displayed behind glass, they are distinguished by golden pastry or deep fried batter, dusted with a generous helping of icing sugar. 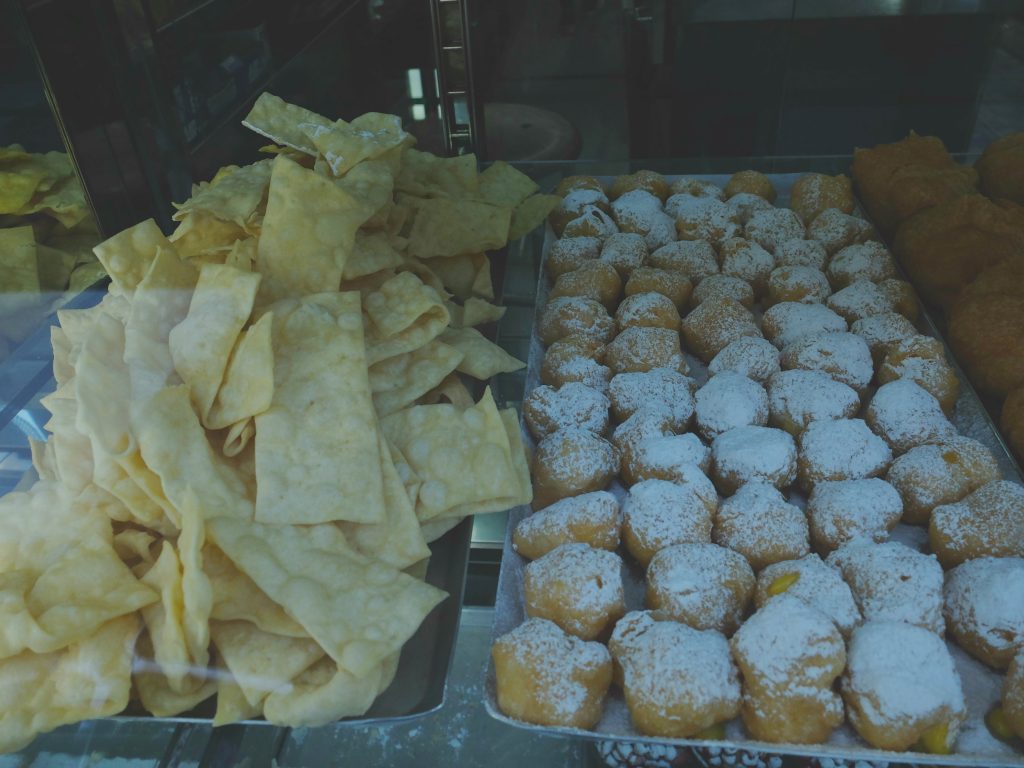 Frappe and castagnole at Regoli in Piazza Vittorio

Look out in particular for frappe and castagnole, the desserts most associated with Rome at this time of the year. Frappe are angular, crunchy fried batter treats the colour of polenta, often covered in fine sugar like a sprinkling of late snow, whose pinked edges always remind me of oversized ravioli. The other Roman treat found in the run up to the Rome Carnival are castagnole, little mouthfuls of light, chewy choux pastry, whose bases have been pierced and filled with confectioner’s cream, ricotta blended with icing sugar, or occasionally piped full of chocolate cream. Their larger cousin, the bigne, officially return to bakeries around March 19, St Joseph’s Day. As ever with these things, public demand tends to usher in all these sweet goodies a little earlier than necessary. (Not that we’re complaining – they’re delicious!)

Historically, Carnival week in Rome was a fantastically debauched street party which ran on for eight days. Traditions included ‘king for a day’, in which the social order was subverted and the populus could get away with all kinds of tricks and games, while wearing masks and imitating society figures – including doctors and noblemen.

Although the festival had its origins in the Middle Ages, it reached the height of popularity in the 17th century, when the Carnival in Rome was celebrated with a riderless horserace down the Via del Corso – how (what is now) Rome’s main shopping street got its name. There’s a wonderful fictional account of the Roman Carnival in Dumas’ novel, The Count of Monte Cristo, when the protagonist rents an apartment in the Corso and takes part in the chaotic festivities.

By the end of the 19th century, the horserace was deemed too dangerous, and Rome’s Carnival celebrations became more sedate. Today, there has been some attempt to revive Carnival celebrations in Rome, and the week preceding Lent is distinguished by street performers in and around via del Corso, piazza del Popolo, piazza di Spagna and piazza Navona, including street artists dressed as traditional jovial and satirical figures such as Arlecchino (the proto harlequin), Colombina and Pulcinella.

Children are encouraged to dress up, but while traditional costumes include fairies and Zorro masks, also expect to see a fair spattering of miniature Marvel and DC heroes, with a propensity for Spiderman and Batman outfits, plus a whole rainbow of Disney Princesses. It’s common to see the streets covered in tiny paper dots and spirals, as wedding-style confetti is tossed around in good spirited street battles.

Carnival festivities reach their peak on Shrove Tuesday, known as Martedi Grasso (like Mardi Gras) in Italian, when a final round of overeating is encouraged. 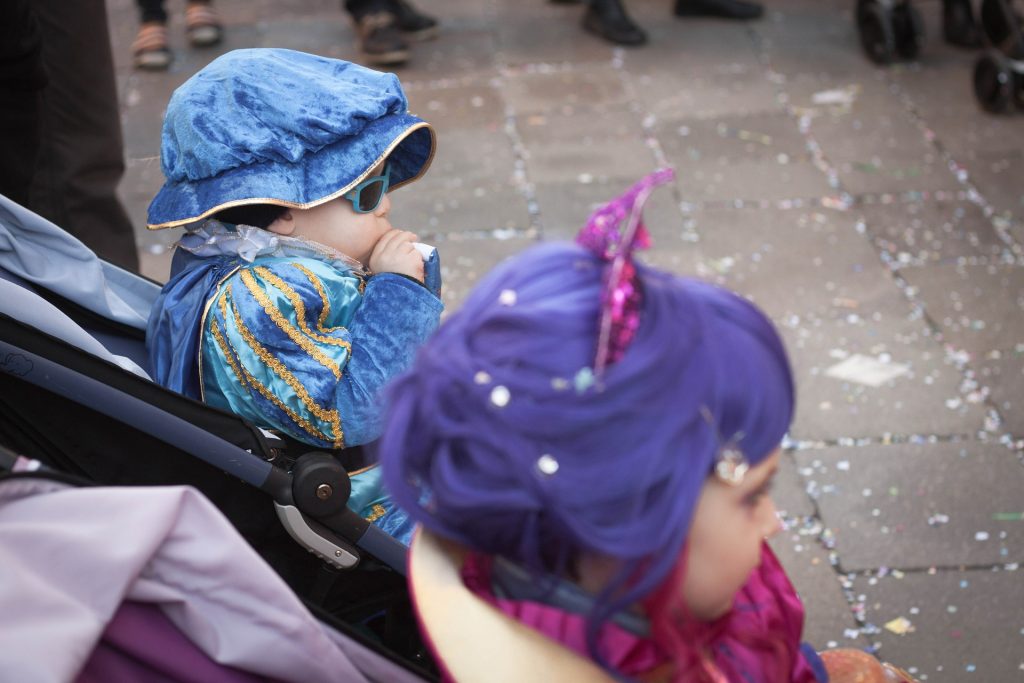 The Carnival of Ronciglione and other Italian Carnivals

A more traditional and atmospheric carnival can be found just outside Rome in the town of Ronciglione in the province of Viterbo, which can be reached from Rome by catching a train to Capranica-Sutri, 1′ 25″ from Ostiense Station. From there, take a local bus on to Ronciglione, about 15 minutes drive away (I cycled it once, but the steep hills have to be seen to be believed). Street floats, locals in medieval costume and musical marching bands throng the roads of the town’s historic heart, while local trattorias and street food stalls tempt watchers with local specialities.

If you have the chance to travel still further afield, other famous carnivals round Italy include the incredible Carnival of Venice, distinguished by fabulous masks and traditional balls, but equally dogged by winter weather and flooding most years. There’s also the Carnival of Viareggio, famed for its oversized street floats, or the Carnival of Acireale in Sicily, where fantastic floats featuring caricatures of famous people pass through the town’s narrow streets and local sweets attract the crowds. 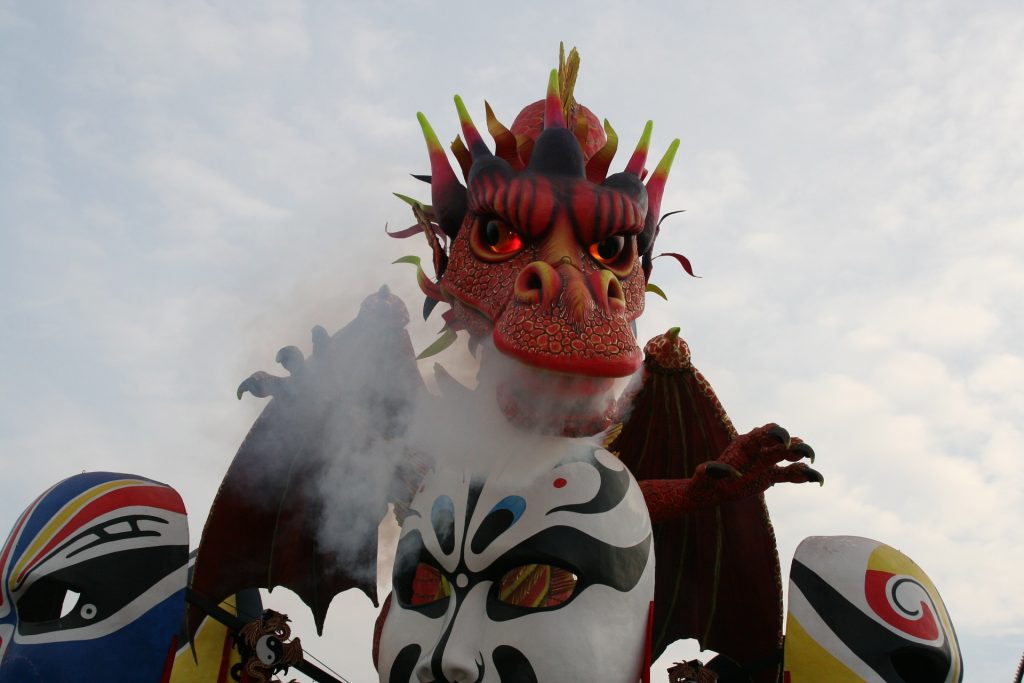 Ash Wednesday marks the end of the Rome Carnival, ushering in a period of prayers and penitence for Christians. One of its customs is the deposition of ashes, a Christian tradition all over the world, where priests and pastors mark the sign of the cross in ash dirt on the forehead of worshippers at a solemn service. It’s one of those moments of the year in which Catholics and Anglicans most resemble one another, and this is also the case in Rome.

The Pope presides at an Ash Wednesday service at a different Roman church every year, usually held at 16.30 in the evening, and preceded by a penitential procession.This year the Ash Wednesday Papal Mass 2022 will be held at the Basilica of Santa Sabina on the Aventine Hill, beginning at 16.30. As with any Papal mass, tickets have to be booked in advance and should be reserved via the Vatican website of the Prefecture of the Papal Household. They are always free but may run out quickly for popular services.

An Anglican deposition of the Ashes in Rome is usually held at lunchtime in English on Ash Wednesday at the Church of All Saints at 153 via del Babuino, near piazza del Popolo and via del Corso. This year, the service starts at 12.45 at All Saints. All are welcome.

Anglicans and Episcopalians unite with Catholics worshippers at the Oratorio di San Francesco Saverio del Caravita, for an Ecumenical Ash Wednesday service this year at 19.00 on the evening of Ash Wednesday. This is also an English-language service. Caravita, as it is more commonly known, is a Catholic liturgical community which welcomes worshippers of other faiths to all its services, held regularly in English.

During the solemn service, after the prayers, worshippers file to the front of the church where ministers mark the sign of the cross on their heads in ashes, with the words ‘from dust you came, and to dust you shall return’, or ‘turn from sin and be faithful to Christ’ in a ritual known as ashing, intending to prepare believers for the Lenten season, seven weeks of prayer and fasting. Lent is known as a 40 day cycle, a richly symbolic number in the Bible, although it is technically 46 days – the secret is that the Sundays don’t count. Christians who observe abstinence during Lent are encouraged to break their fast on Sundays throughout the period, with each Sunday dubbed ‘a little Resurrection Day’ – a precursor of the Easter celebration to come.

Read next: Easter in Rome 2022: A Guide to Holy Week 2022, including Good Friday and Easter Sunday