Eating fish in Rome: 3 out of this world restaurant experiences

If you’re travelling to the Eternal City and are planning on eating fish in Rome, you’ve come to the right plaice.

Of all the dining choices in the world, you really need to be in good hands when ordering fish. Sourcing the fish, storing the fish and preparing it correctly are all crucial steps for a restaurant, having a direct impact on the dining experience and sometimes even on the diner’s health.

While fish isn’t an integral part of traditional Roman cuisine, although cheaper catches do turn up in soups and deep-fried baccala is a Roman staple, it has notoriously been difficult to eat quality fish at the right price in Rome. That’s why travellers to the city planning on eating fish in Rome need to do their homework. It is an expensive ingredient, particularly when well-sourced, but paying the correct bill at the end of the night for the right quality should be a consumer’s right, which is sadly not always the case.

Here, though, are three out-of-this-world places for eating fish in Rome, where the not-insignificant price reflects both the outstanding quality and the experience, for an unforgettable evening in the capital. 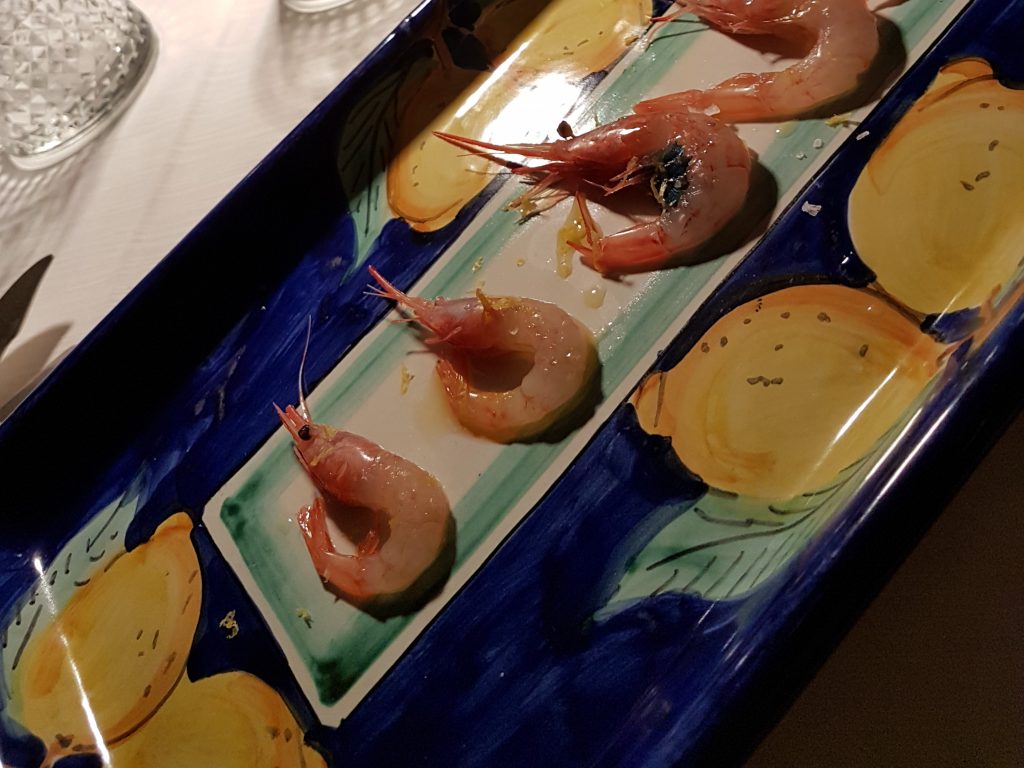 Just five minutes in a taxi from Termini station, on the fringes of the refined residential district, Piazza Fiume, Stefano Chinappi’s eponymous restaurant is a fabulous city-centre choice for eating fish in Rome. Hailing from the seaside town of Formia, near the southern Lazio border with Campania, Stefano has his own fishmonger at the seaside in Formia, buying directly from local fishermen and bringing the catch of the day up to his Roman restaurant each morning.

He has been serving food in Rome for the past eight years, although his family place in Formia was estabilshed in 1956. The result is apparent in the incredible quality of the fish served here: I have never eaten fresher fish in the centre of Rome before – I was blown away by the exceptional standard of the food and its elegant, simple preparation. Definitely an outstanding choice for eating fish in Rome. 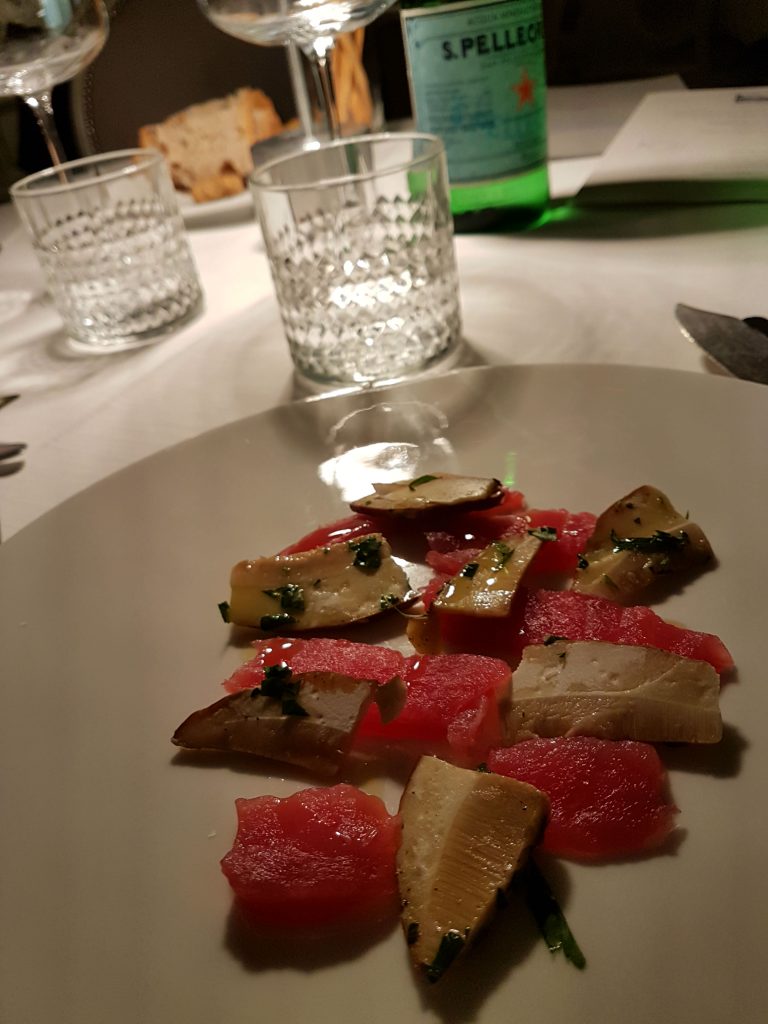 While the restaurant’s interior is classy and romantic, distinguished by swathes of cream tablecloths and low, delicate lighting, the food and the choice of plates bring a welcome splash of colour to the table. They are, quite rightly, the star of the show. The tableware, like Stefano, hails from the south: he prefers to serve the freshest of fish on bright ceramics from Vietri al Mare on the Amalfi Coast, daubed with bold lemons and bright shellfish on a sea of blue.

Stefano believes strongly in serving guests the freshest, best fish possible, so if you have an open mind and enjoy eating seasonal food, do ask for recommendations. Some days, he prefers to focus on rich fish soups and stews in the bouillabaisse style, brimming with small fish distinguished by flavour and texture (€49 per head), while other days, depending on the season and the weather, you’ll be steered towards out-of-this-world raw fish, served as marinated carpaccios or dressed very simply, as if you were eating Mediterannean sashimi, followed by simply prepared cooked dishes, where the taste of the fish shines through.

For a special occasion, I can highly recommend the €99 degustation menu, featuring nine fish dishes and three desserts, for a truly broad experience ranging from raw to cooked fish. My menu included a selection of raw bonito fish with fresh porcini mushrooms (pictured), baby octopus and spaghetti with small telline clams. Stefano’s iconic dessert, the pineapple ravioli, is a sliver of pineapple folded into a half-moon, filled with lemon sorbet (below). 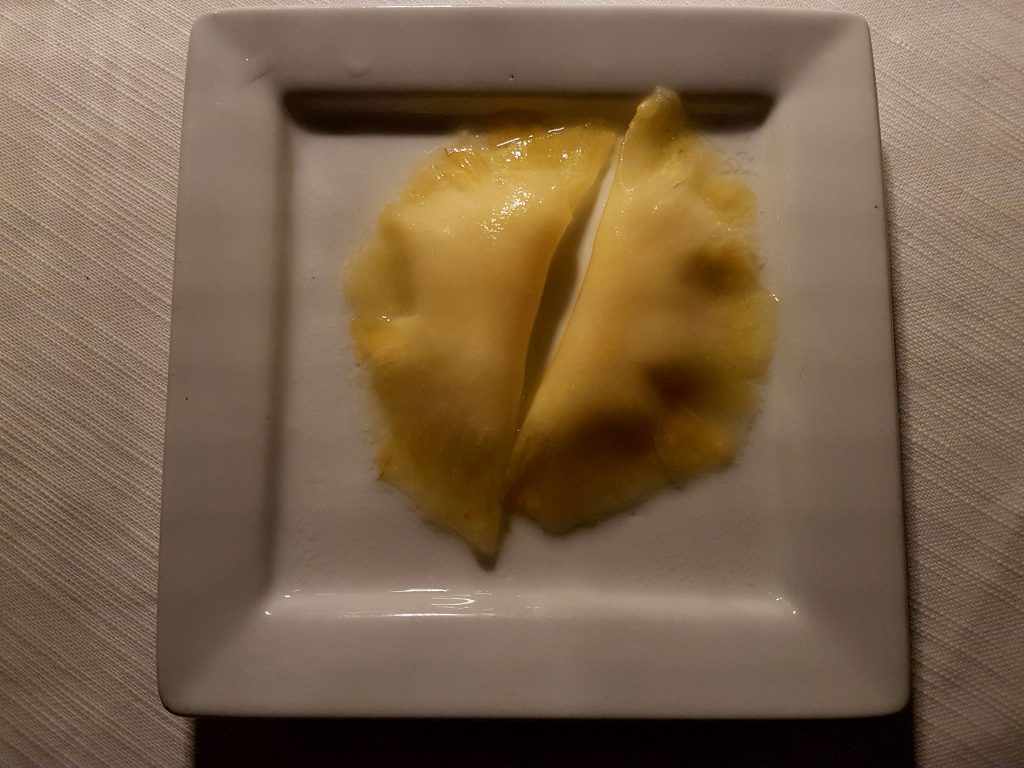 Or, if you have room, don’t miss the famous latticed pastiera Napoletana, rendered fragrant with a phial of millefiori aromas.

The wine-list is comprehensive, featuring plenty of local choices. Expect to dine for a minimum of €65 per head, drinks included. 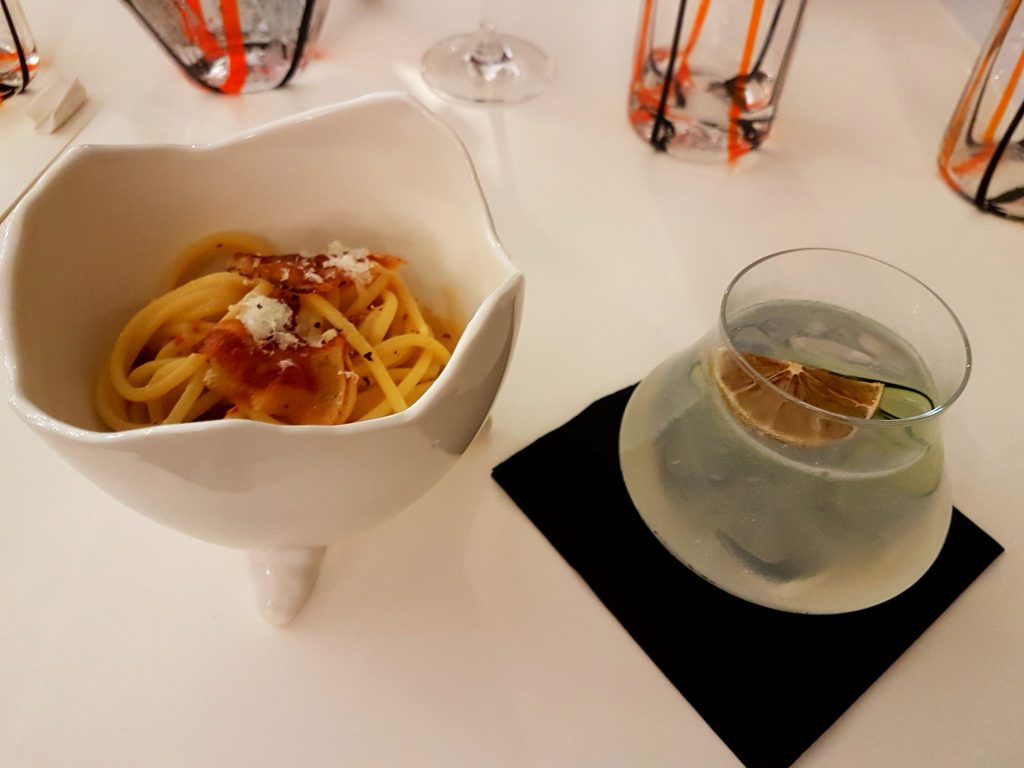 2. Ristorante Livello1: the out of town choice for eating fish in Rome

This modern fish restaurant in south Rome requires a little planning to reach, but is an exceptional dining choice for eating fish in Rome, both in terms of its attractive interior, and the exceptional quality and inventiveness of the cuisine. What can you expect? How about fish freshly caught near Anzio and Ponza the same day, prepared by a team of chefs at one of the capital’s most exciting and forward-looking seafood laboratories. 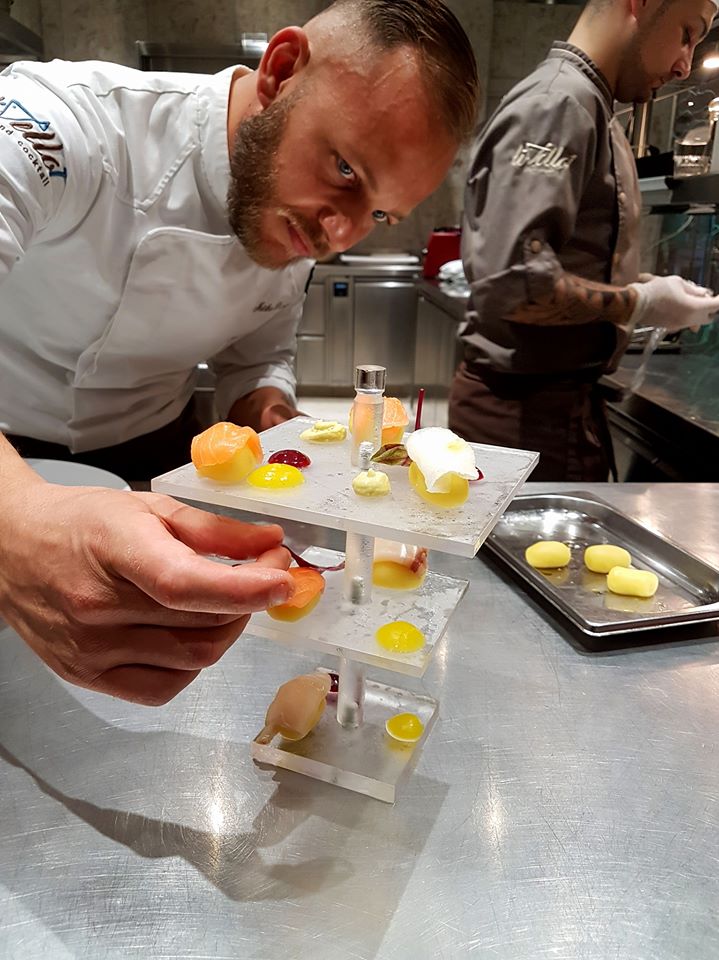 Livello 1, which opened a year ago in EUR Laurentina, explores the best of raw and cooked fish with a special #fishandcocktail theme during the aperitivo hour. Here, cocktails – sometimes exotic in origin – are paired with exquisite small dishes. Aperitivo plates include a fried dough ball filled with burrata and anchovies, plus a hot/cold tuna sandwich, amongst other raw and cooked delicacies. It’s a good choice to try out the restaurant, or for light appetites in the warmer months.

Chef Mirko di Mattia has created his own take on sushi, called causushi, replacing rice with a spiced potato and lime mash that beautifully sets off the fish, as well as fish tacos – plus a host of other exceptional dishes. One of my favourites was the sea-urchin carbonara, which I sampled matched with a cucumber-infused gin and tonic, freshly squeezed lime and mastiha (pictured). A really special and unusual approach for eating fish in Rome.

If planning to dine in the evening here, it’s worth noting that the prices match the quality of the “0 kilometre” fish. Antipasti plates, including a selection of causushi, ceviche and tartares, start at €16. First courses, including the sea urchin carbonara, gnocchi with eel and tortelli with lobster are priced between €18 and €25.

The main courses, including a spectacular fish soup (€30), also include fusion-style black cod, sea bass served with olives and mozzarella di bufala, plus turbot with foie gras and mushrooms, ranging from €28 to €30. Expect to pay €8 per 100g for local, freshly caught fish, or €12 per 100g for shellfish. 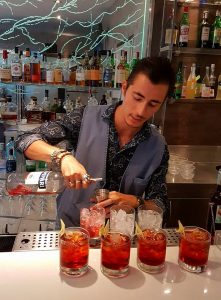 It’s worth noting that barman Edo has got the cocktails covered. I tried one of his specials, called Senshi, made with Rabarbaro Zucca, bitter Campari, Chinotto and citrus aromas.

If that wasn’t enough, the restaurant has its own fishmonger next door where you can purchase some of the best fish in town, or commission dishes to take away. Definitely a great choice for eating fish in Rome. 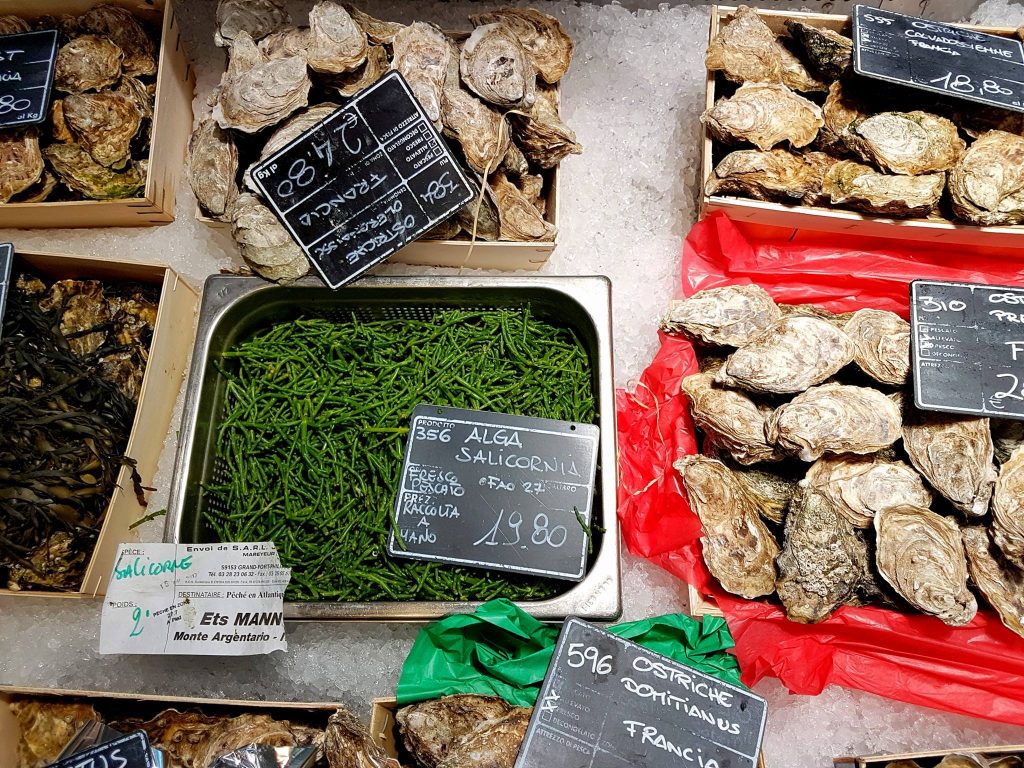 3. Eataly’s fish restaurant: the fast and fun choice for eating fish in Rome

In July 2017, Eataly’s fantastic raw fish counter on the second floor of the Rome Ostiense megastore transformed from simply selling first rate, fresh products into fishmonger and restaurant. Now, as well as being able to take away great raw fish for your own dinner parties, you can also eat in. The fish for raw consumption has been frozen to -20°C for 24 hours to kill bacteria. Expect everything from sea urchins to violet prawns, with rare seaweed, locally caught tuna, octopus, shellfish and of course several kinds of oyster stealing the show. This is a fun, fast and easy route for eating fish in Rome. 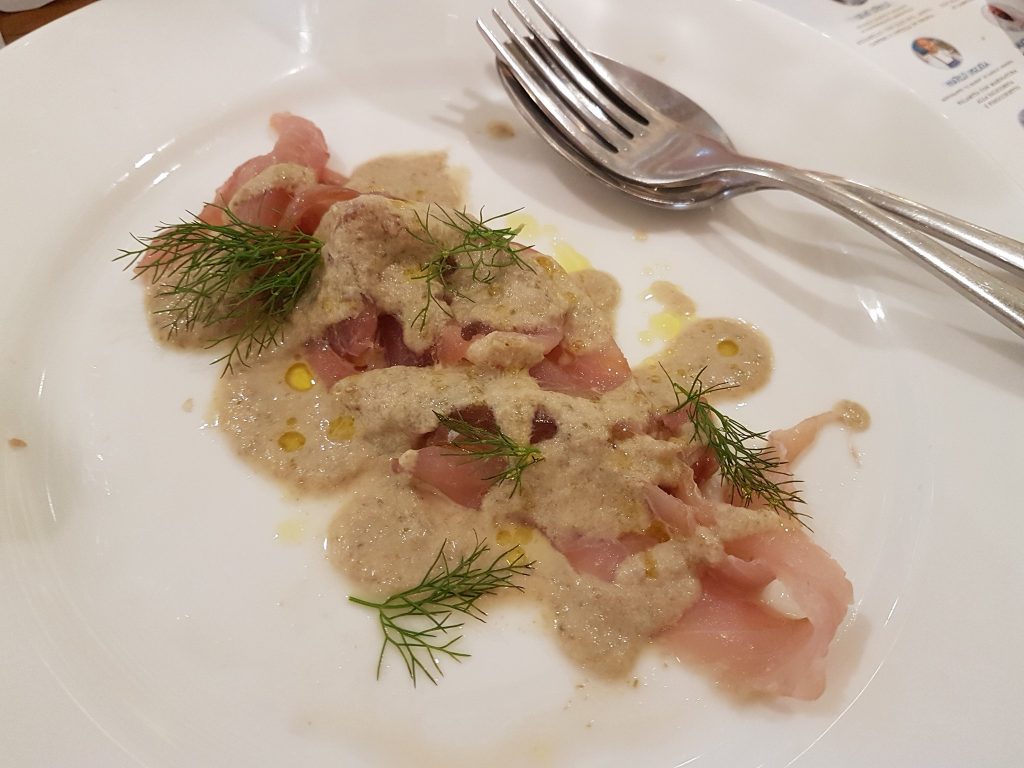 The food is served simply, with extra virgin oil, lemon juice and salt as basic dressings, acid ‘cooking’ the fish on the spot. Some dishes are enhanced with a use of herbs, including fennel, peperoncino and chives, or ginger and pink pepper. Others are dressed with cucumber, cherry tomatoes or capers to enhance the flavours.

The fish isn’t just the ‘raw’ standards you might expect after a lifetime of eating sushi, so put aside your prejudices for small and ‘cheaper’ fish, which Eataly notes are much more sustainable as far as their ocean habitat goes. If you think that a fully grown tuna takes seven or eight years to replace, Eataly is seeking to serve also fish types which can be consumed at less than a year of age, and so the restaurant contributes to a culture trying not to depopulate the oceans. These include bonito and amberjack, which make excellent carpaccio. Tasting plates start at €6.

You can also order prawns singly, ranging from €1.50 to €4.50 depending on the size; molluscs, including squid and octopus, and shellfish including oysters and clams, which range from €2.80 per piece to €4.00.

Plates of three, five and seven fish or mollusc tasting portions cost €15, €25 and €35 respectively. A gran plateau sharing dish with 12 items costs €36, which larger plates are priced at €59 or €82. So the cost of the night out is pretty much up to you (and your appetite).

With Eataly’s brand new enoteca next door, you’ll probably want to add a glass or a bottle of bubbly to go with it. Look out too for the monthly, showcased fish auctions. Overall, a spectacular option for eating fish in Rome which fits to any budget.