Is Pane & Tempesta the best pizza by the slice in Rome?

Pane & Tempesta is a bakery in Rome’s Monteverde Nuovo district serving pizza by the slice and a range of homemade bread. Why should you visit Pane & Tempesta in this slightly out-of-the-way neighbourhood above Trastevere? Because the remarkable pizza served here is one of the best you’ll eat in Rome, and amongst the best pizza I have ever eaten in all of Italy (and that’s a lot of pizza).

Just in case you can’t make it to Monteverde, the duo behind the bakery, Fabrizio Franco and Omar Abdel Fattah have just opened a second branch in via Pisana. They also won Best Bakery in Rome 2018 at the Festival della Gastronomia while I was drafting this post (synchronicity is everything).

Pizza by the slice is often seen in Italy as the poor cousin of the glorious pizza tonda, the round pizza, which is more customarily served in restaurants and sit-down pizzerias.

Indeed, pizza by the slice all over Italy – with its fast-food, grab-n-go associations – often slips into a no-nonsense category of snacking, often lacking in imagination and low on quality.

Not so at Pane & Tempesta. 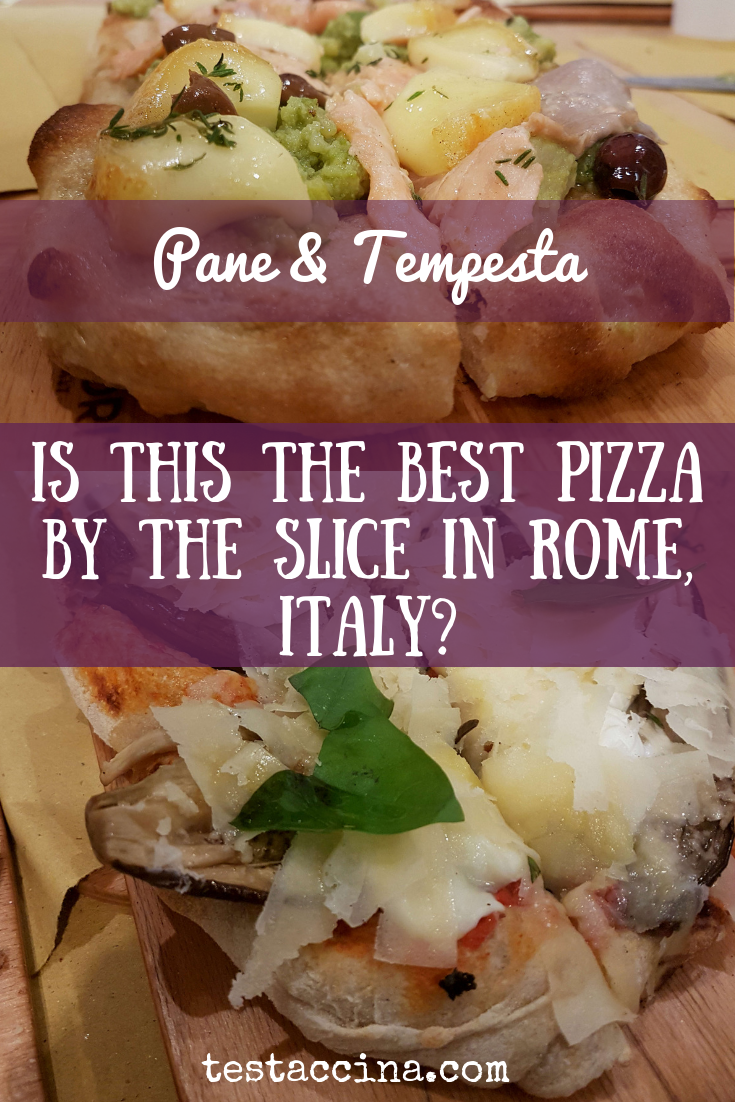 In fact, get ready to put aside all your preconceptions and prejudices with a trip to this peaceful neighbourhood bakery and pizzeria which looks rather ordinary from the outside.

It’s frequented by plenty of takeaway customers, to be sure, but there are also a handful of handsome wooden tables in its bright, cheerful interior in case you want to make a night of it, ordering entire pizzas to share. During the week, there’s a choice of about 20 toppings, which rise to a glorious 30-odd on weekends. 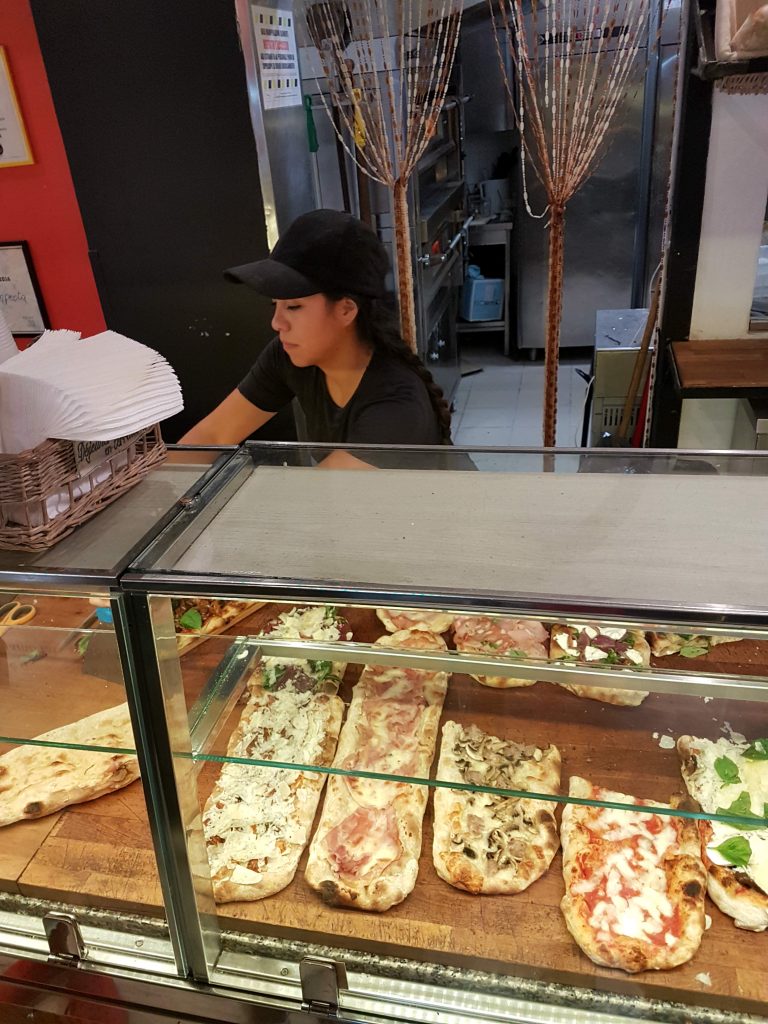 In the glass fronted counter, the pizzas  – which come in magnificent, half-metre long lozenges, like ancient race tracks – can be ordered whole or by the slice. And they don’t look like the pizzas you find in other Roman bakeries: apart from the unusual form, these are light, laden clouds of dough, dressed with tantalising toppings which aren’t easy to guess at first sight.

Launched in 2014 by two friends who are obsessive about the ancient art of bread making and leavening the perfect pizza, Omar’s enthusiasm is infectious as he tells me about his search to perfect his art. 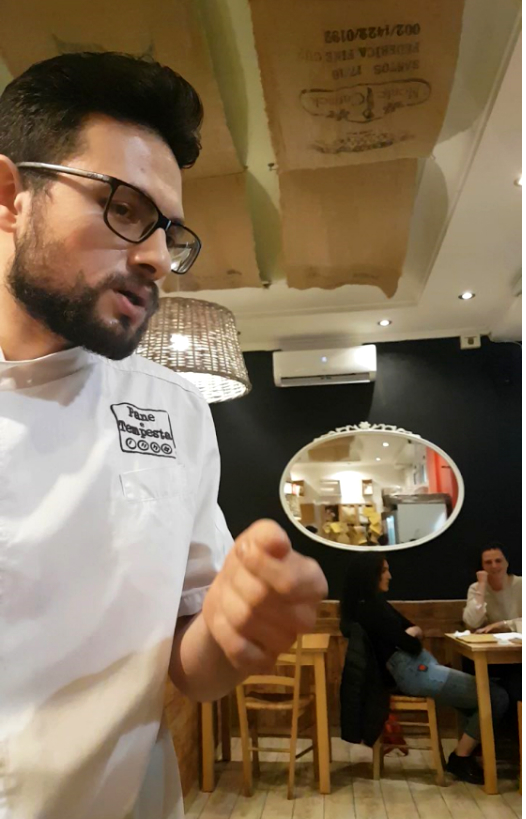 And the pizzas – great, cushion-rimmed oval clouds of dough dressed liberally with fresh combinations of savoury, sweet, tangy and sumptuous toppings – are amongst the most magnificent pizzas I have ever eaten.

The bakery and pizza takes it’s name from the book by Italian author Stefano Benni and this bakery has an almost romantic reverence for its craft. 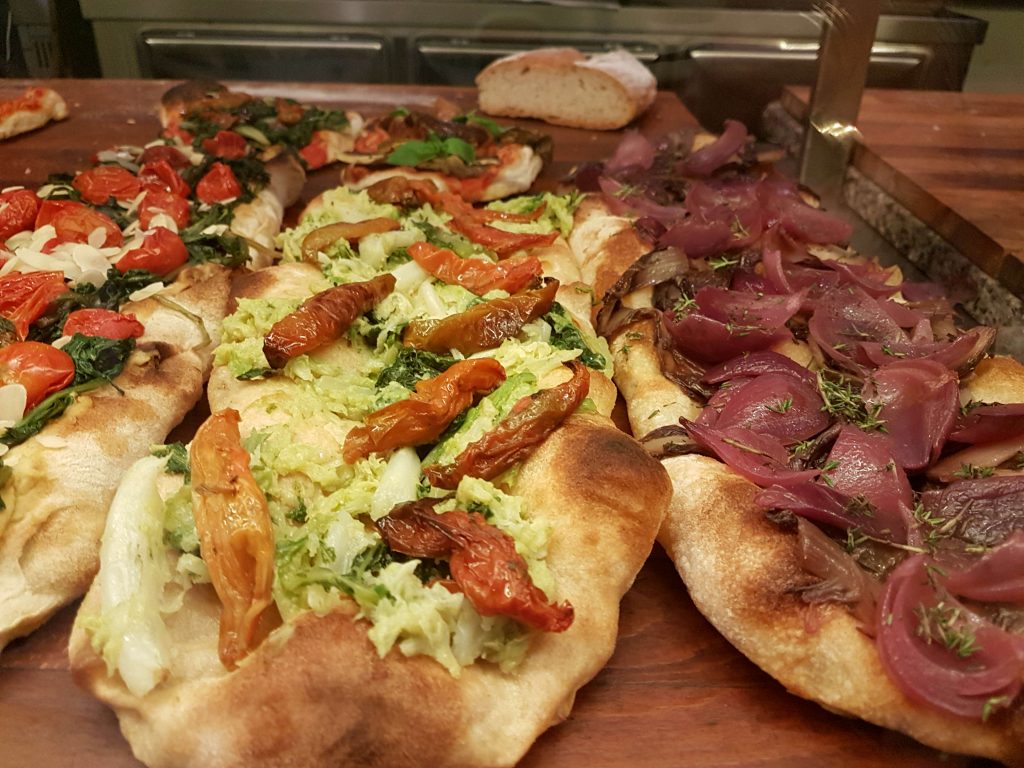 There’s something primordial about making dough: kneading ground grains is an act as ancient as civilisation and it’s no coincidence that bread is a metaphor for life in the scriptures. The addition of yeast, too, is an old magic: doubling the dough in size, bubbling into a new creation in the oven.

I am reminded of this ancient religion at Pane e Tempesta: if the restaurant’s name is a literary reference, the pizza is part of the verse, and we are in the hands of a high priest. 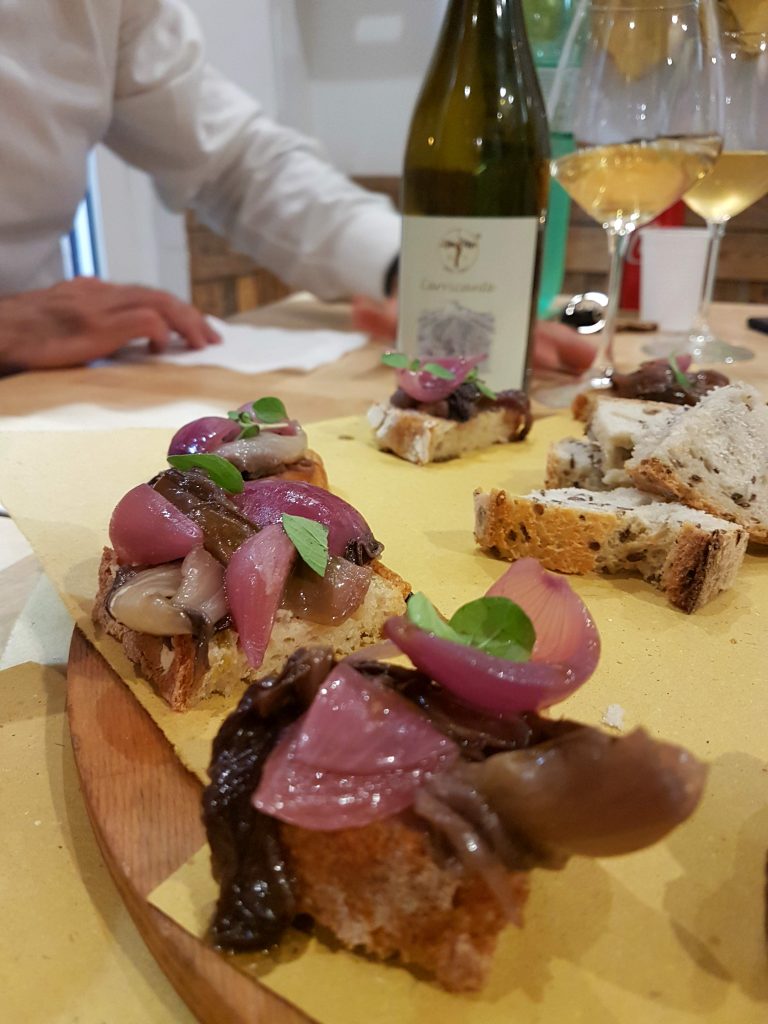 We start with a few humble squares of bread, some speckled with poppy seeds, and topped with a mix of marinated zucchini and sauteed red onion. Fresh and warm from the oven, it’s a perfect first taste. We are drinking a natural white wine, but there are good craft beers on the menu too.

Then Omar brings us our first, whole pizza to share and my table goes silent. This is something new. 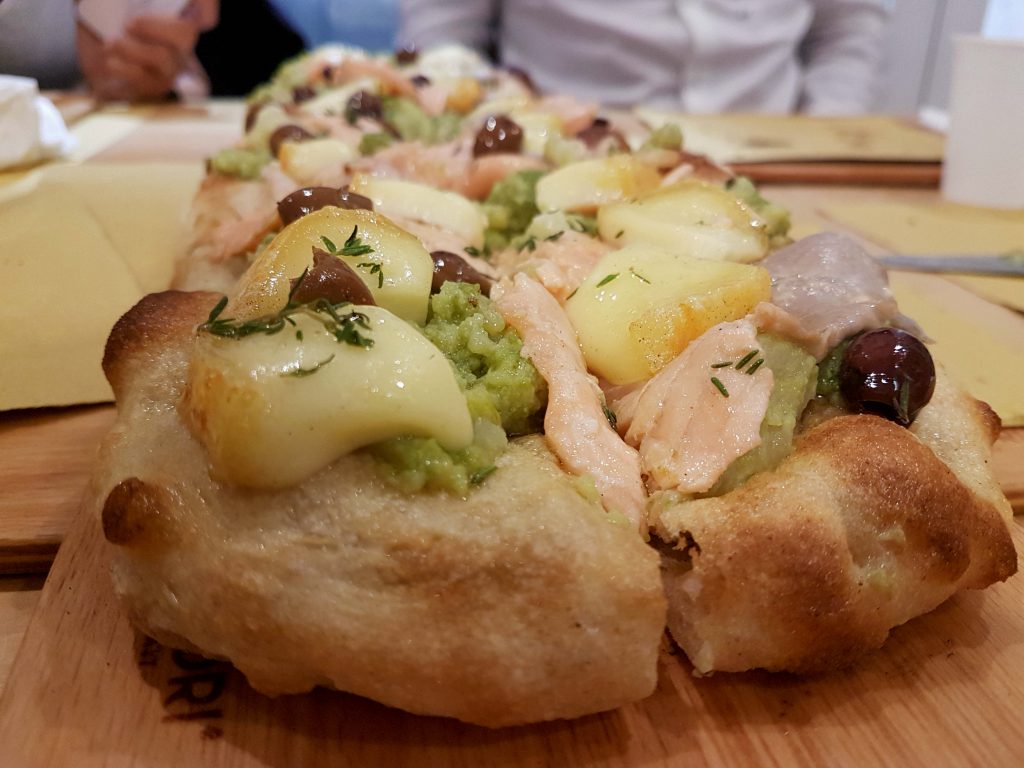 The combination of marinated salmon, Romanesco broccoli, Gaeta olives and Toma cheese is a succulent triumph, defined by bitter and sweet flavours, united by the creamy tanginess of the melting cheese.

What follows is tray after tray of long, pocked and cratered pizza piled up with toppings and they are simply magnificent: the dough is the perfect point between crispy and soft, light and easy to digest. 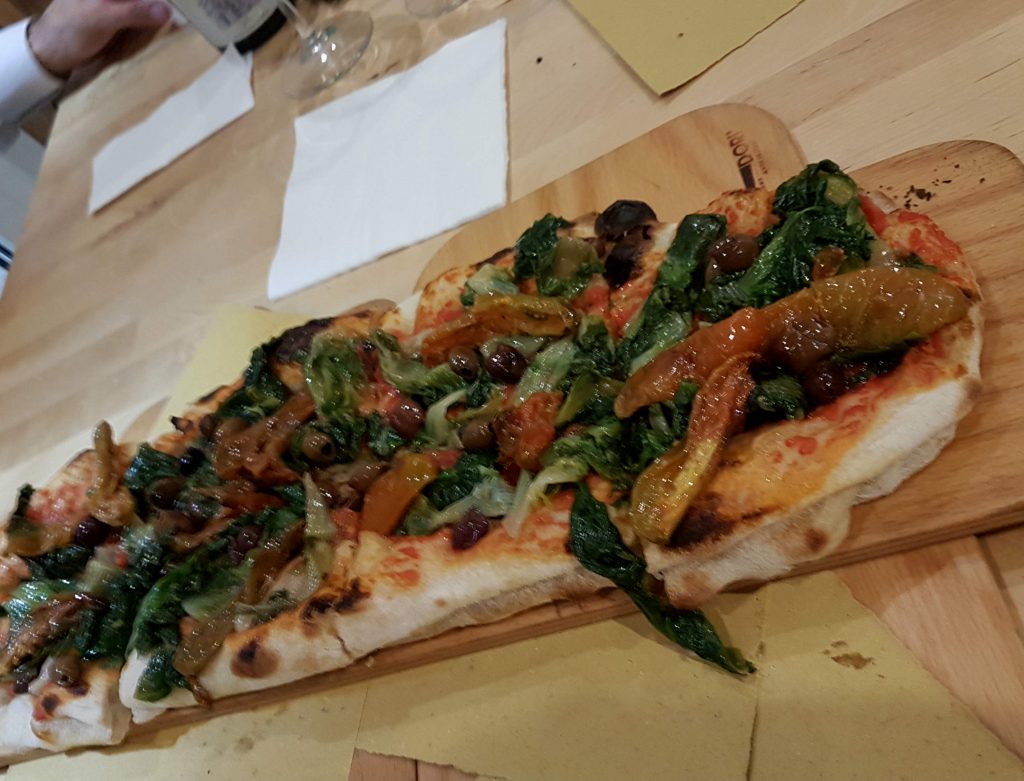 Next, scarolo greens, olives and San Marzano sun-blushed tomatoes which prove a wow combination of textures and tastes.

There are five of us, so we plough on: the next is a sweet and savoury combo which is perhaps my favourite of the night. Pancetta, white cabbage, green apple, almonds and provola cheese hits the savoury, salty high notes, beautiful contrasted with the sweet crispness of apple and almonds. 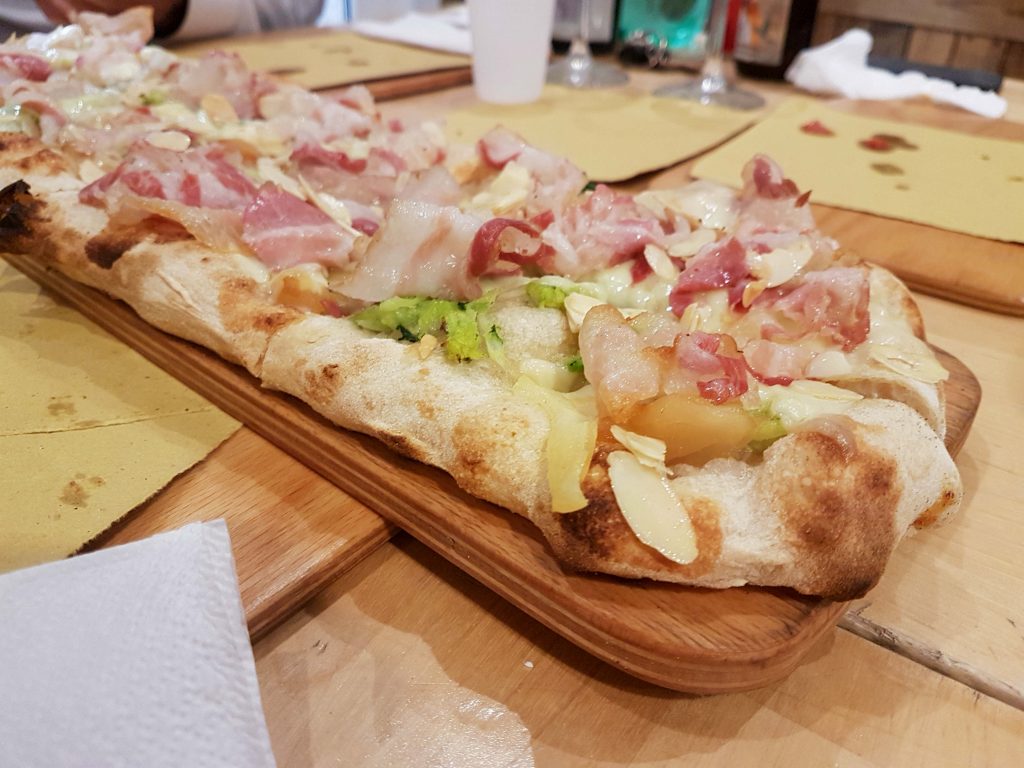 We have room for one last pizza: a Circus Maximus of eggplant parmigiana veiled with thin slices of cheese over succulent aubergine and tangy tomato. 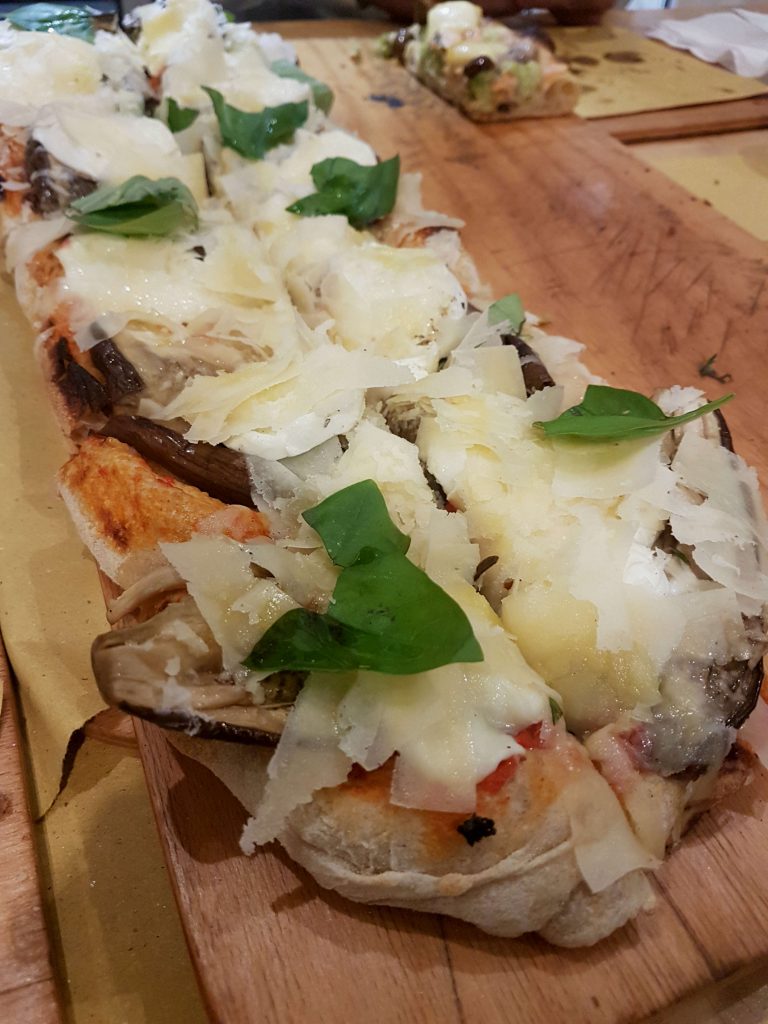 Unsurprisingly, the Pane & Tempesta experts are also brilliant at the sweet course: we sample a chocolate tart filled with a matrix of tart apricot jam, like a stained glass revelation. 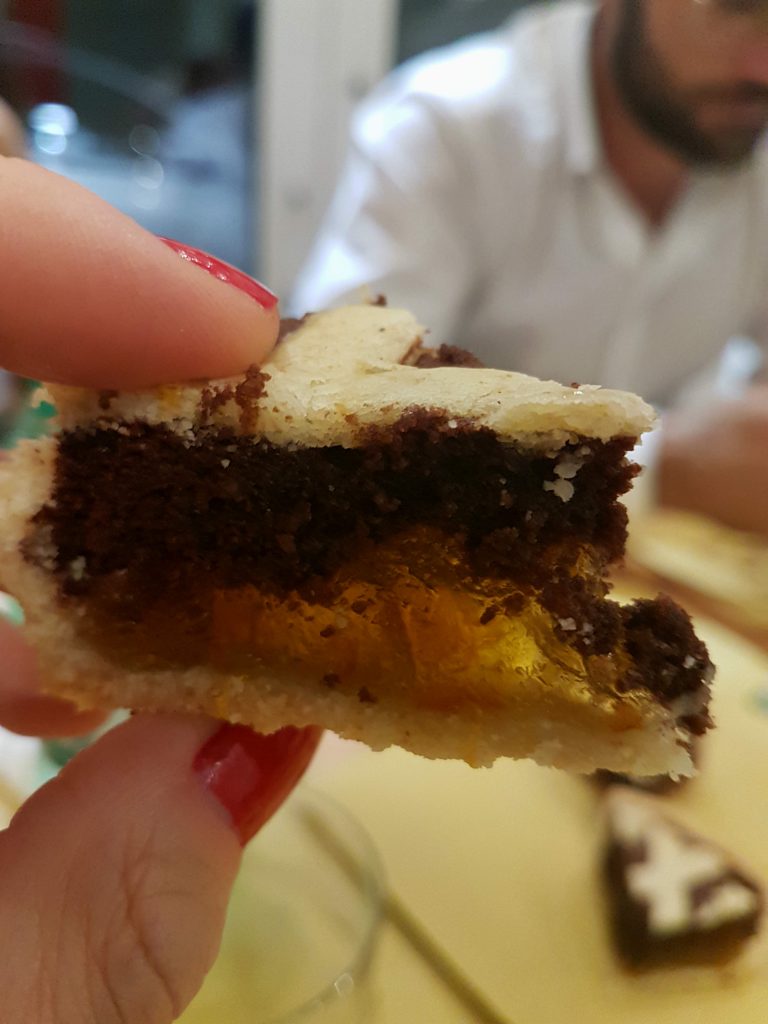 At close of play, we stagger out into the dark, each clutching a loaf under our arms for the next day’s breakfast. It’s a sort of hedge against the night ending.

I wedge my farmhouse loaf under the seat of the Vespa, and ride home – nay, fly home – on a magical cloud of dough.