Keats & the Cats: 9 Things to See in Rome’s Non-Catholic Cemetery

While Keats & the Cats would be a great name for a jazz fusion collective, the only music I’m humming as I write this article is a rather onerous funeral march. Death awaits us all, and darkness is descending. If you were looking for a cheerful read, click away now! If, on the other hand, you get a slightly weird frisson of excitement by being scared out of your wits, read on for an inspiring visit to the atmospheric and almost cultish graveyard in Testaccio, Rome’s Non-Catholic Cemetery.

If you love gothic vibes, monochrome statues, spooky cypress trees and hissing cats then this is the place for you. Sometimes erroneously called Rome’s Protestant Cemetery, this burial ground was actually founded for the city’s illustrious dead that fell outside the Catholic Church (read: doomed to hell). Here, Anglicans, Greek and Russian Orthodox, non-believers and even communists are laid to rest in tiers that recall a ghoulish wedding cake.

If that’s not enough to get you on the 23 bus, here are 9 spine-tingling reasons to visit the Non-Catholic Cemetery in Testaccio.

As much as I like to shoe-horn Doctor Who references into anything I write, the weeping angel in question is actually a beautifully carved statue of a heavenly being in pieces as she weeps at the grave of Emelyn Story. It’s probably the Non-Catholic Cemetery’s most photographed asset – expect to find the the bodies of over-excited Instagrammers at its feet. But seriously, as you stand under those black pines and gaze at the distraught marble figure, even the least imaginative person can only feel a frisson of gothic excitement. Beautifully moving. 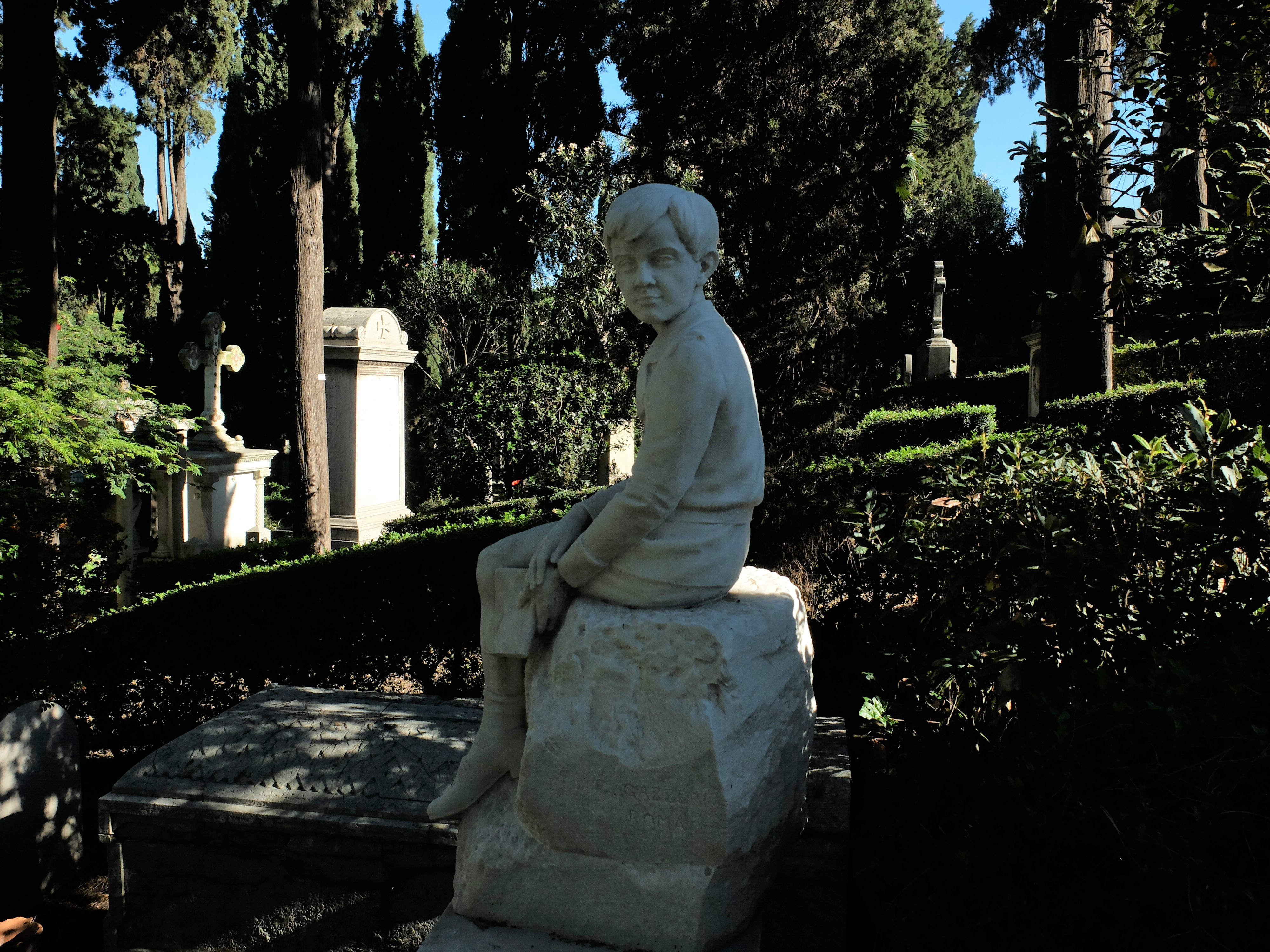 No offence intended, but there are a few statues in the Non-Catholic Cemetery which look like something out of a fright film. The sculptor who fulfilled the wishes of these distraught parents must have known that he was onto something as he carved this incredibly sombre figure who holds you with his gaze. ‘Would you like to play with me?’ Not right now thanks. Awfully nice of you, though. 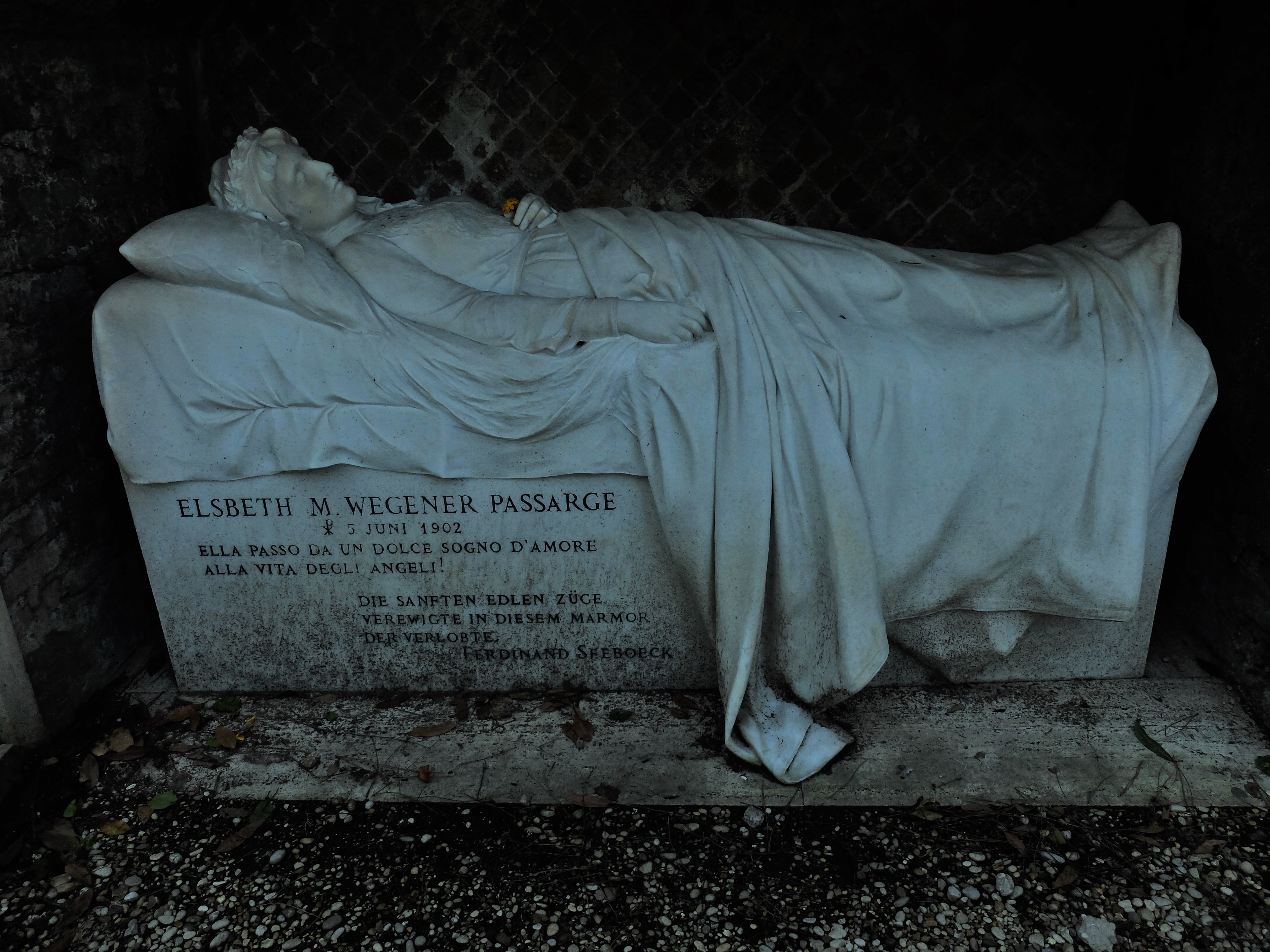 3. Love letters to the dead 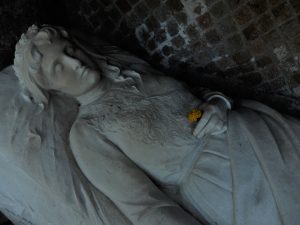 For anyone that grew up on EE Nesbit books (or Doctor Who – sorry), it’s hard to have a totally normal relationship with statues. Take the lovely Elsbeth, whose grave bears the words: ‘She passed from a sweet dream of love to the life of the angels’. Wow. There’s an entire life in a Haiku if I ever I saw one. The full story goes something like this: Elsbeth Wegener Passarge, was supposed to have died, aged 18, on her wedding day. Local legend says that if you place a flower in her hand she will grant you a wish.

You probably know that some pretty famous folk are buried in this graveyard, including the ashes of the English poet, Percy Bysshe Shelley, buried in the shade of a crumbling tower in case his cracked marble stone, usually strewn with purple lilies, wasn’t atmospheric enough for you. I recommend the mad Ophelia look if you’re coming here on a date with a Romantic soul – and don’t forget to fling yourself to the ground and sob a little.

According to the story, the poet was drowned when his sailing boat the Don Juan was wrecked during a voyage from Livorno to Lerici off the Tuscan coast. It took 20 days for his body to be washed up and his face had become unrecognisable. He was buried that day in the sand, but later dug up by his friends and cremated on the beach. Legend has it that his heart wouldn’t burn and his widow, Mary Shelley, wrapped it in silk and kept in in her writing desk until the end of her days. 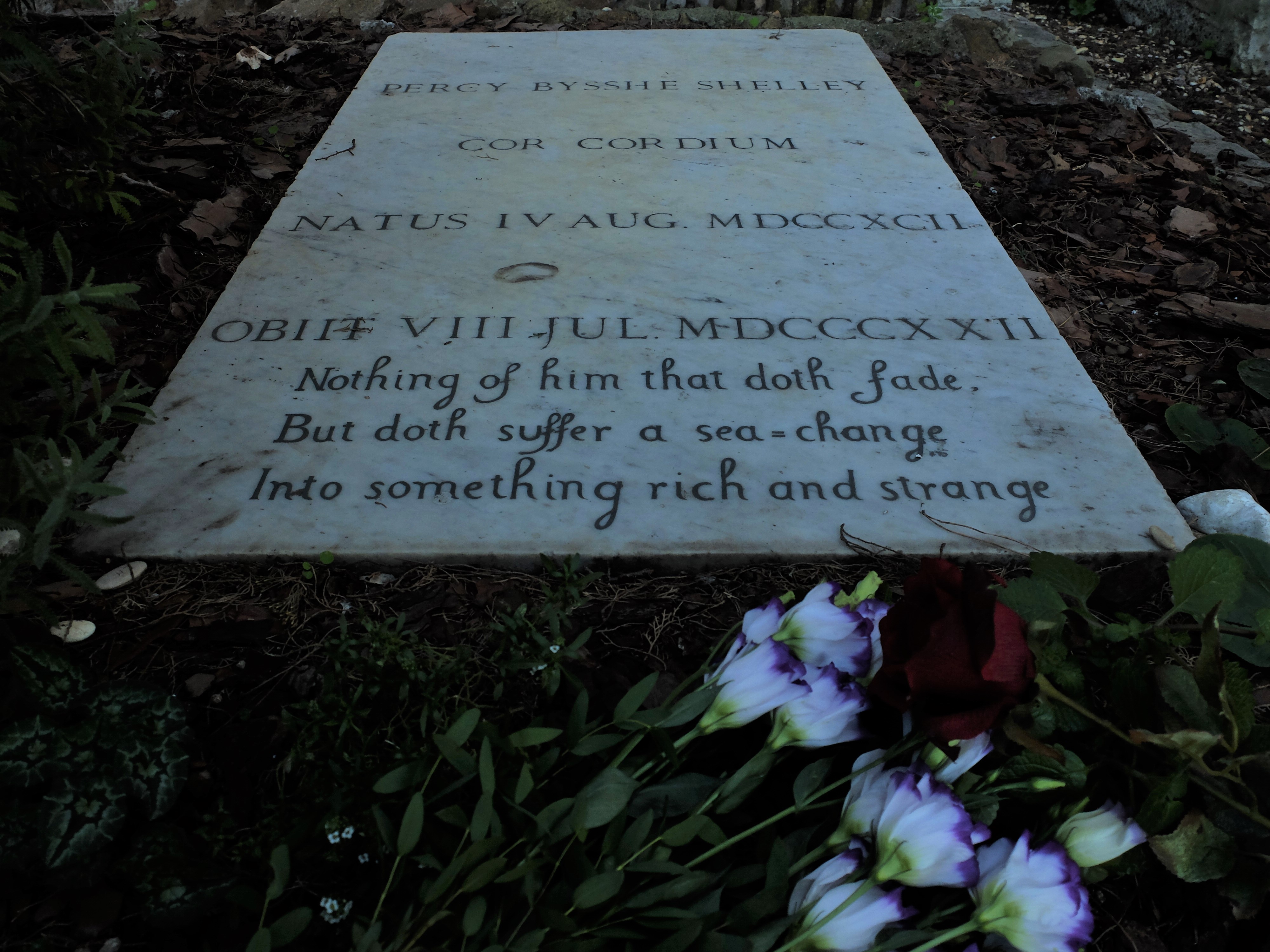 5. The cats of the Non-Catholic Cemetery

Cemeteries have a trick of feeling like miniature cities, with their rows of graves and tombs – a bit like Milton Keynes (apologies to cemeteries). But this graveyard really is inhabited by the living – its crawling with cats, residents of the local feline rescue home. They do love hiding behind gravestones with their backs arched and hissing at you when you wander round corners. Can’t say I didn’t warn you. 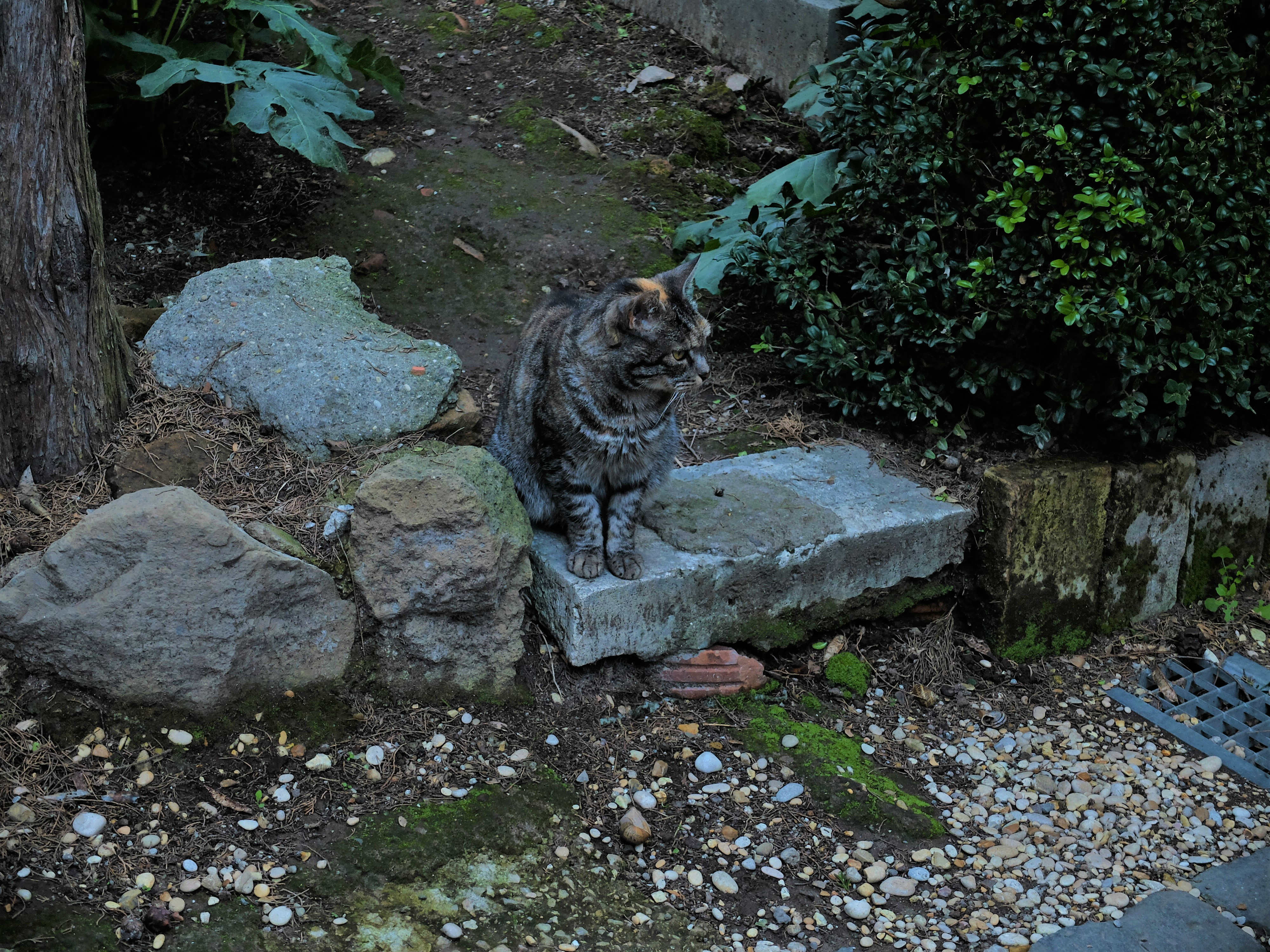 Expect Celtic crosses, three-barred Orthodox crosses and plain crosses – but no crucifixes. This cemetery is a encylopedia of non-Catholic iconography, from simple, plain representations to intricately carved Irish and Russian forms. 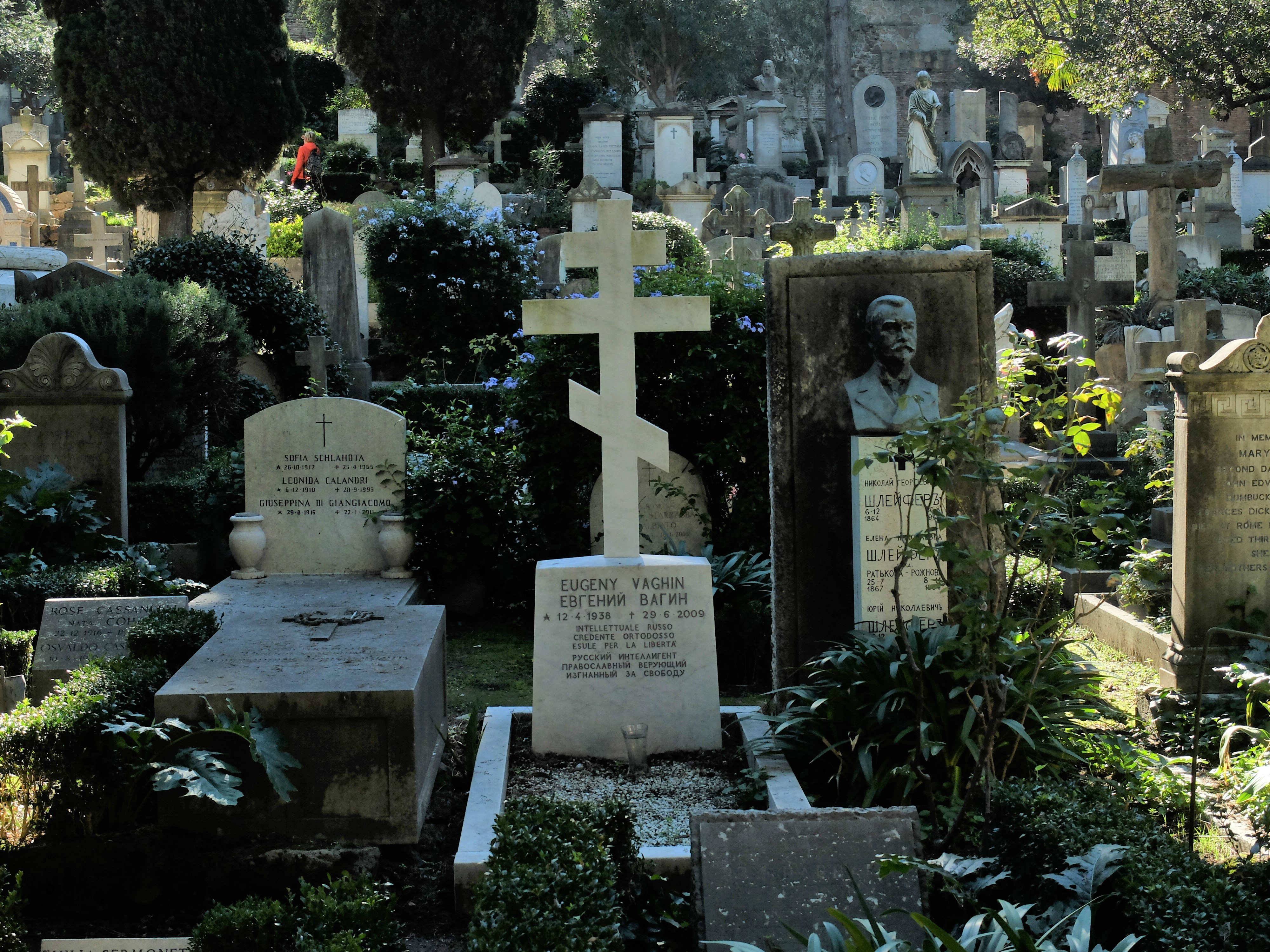 7. The chapel of the Non-Catholic Cemetery

Did you know that there’s an Anglican chapel in the grounds of the graveyard, which is open to the public on November 2nd? A simple service to remember the dead, usually held at 11am, brings expat believers to the cemetery. 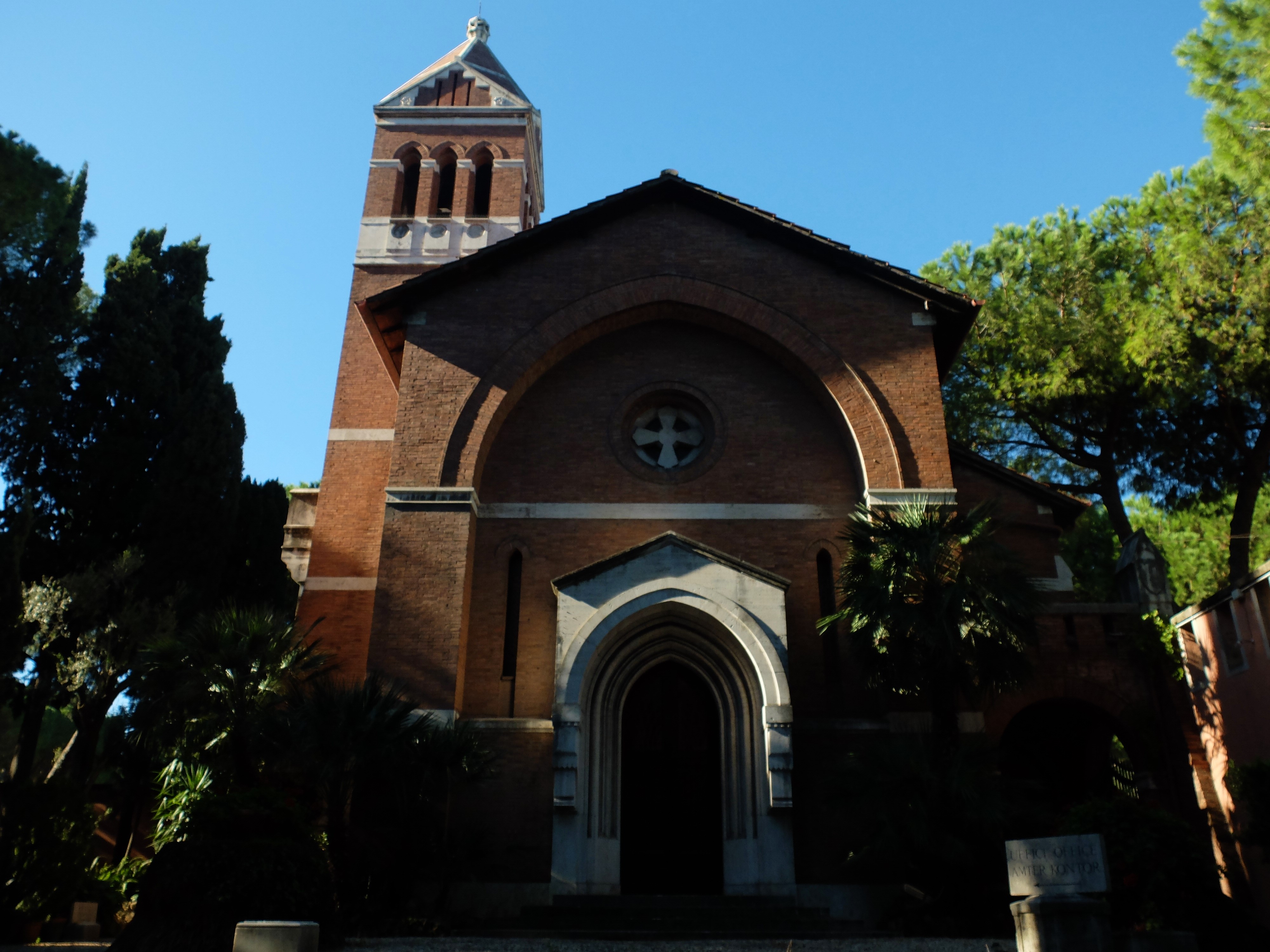 8. The grave of Keats

Inspired by a character in a Virginia Woolf novel who brings flowers to Shakespeare’s grave, I must confess to once bringing an armful of blooms to Keats’ gravestone, which stands in a green corner of the Non-Catholic Cemetery. My inner Romantic drama-queen couldn’t resist. If you want to vary the theme, I can highly recommend reciting a couple of odes, sighing with one bony wrist held to your forehead, or fainting. Looking pallid and lowering your gaze also works.

Keats requested that on his gravestone no name or date should be written, only the inscription ‘Here lies one whose name was writ in water’. Above it was to be carved a Greek lyre with four of its eight strings broken to show his life cut off before maturity. He came to Rome in search of warm weather to cure his sickness, but died aged just 25 during a cold and damp winter. 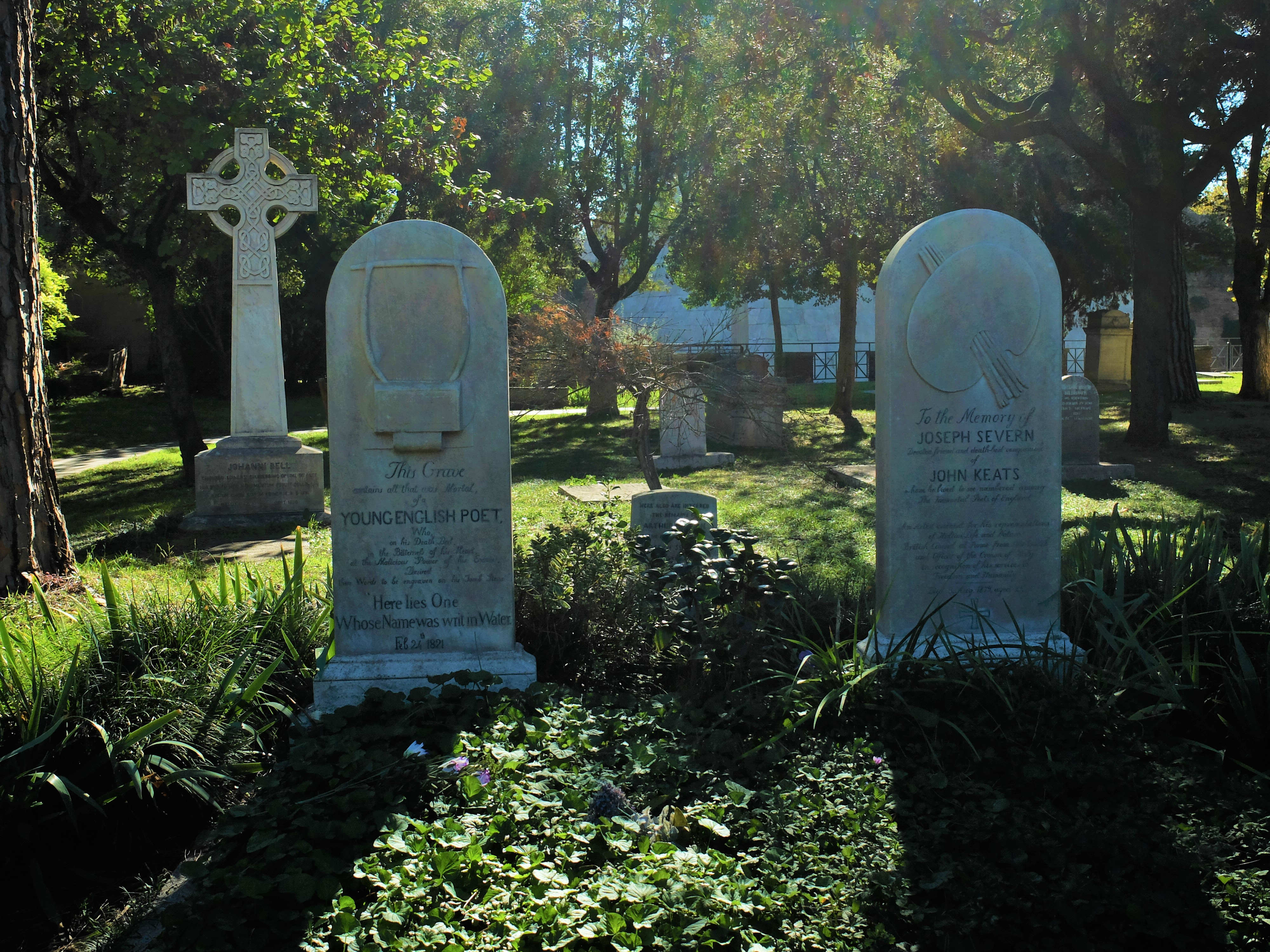 9. An unexpected view of Rome’s Piramide

The largest tomb in the Non-Catholic Cemetery (great pub quiz question) is, of course, Rome’s piramide (pyramid). Built by Caius Cestius, whose burial urn was never found, there’s a rather spooky door at the back which you can see well from the inside of the graveyard. After visiting Keats’ grave, go and read up on the Pyramid’s history on the usefully placed signage and admire its sparkling recent restoration. There are also opportunities to visit the pyramid and experience a guided tour. More information here. 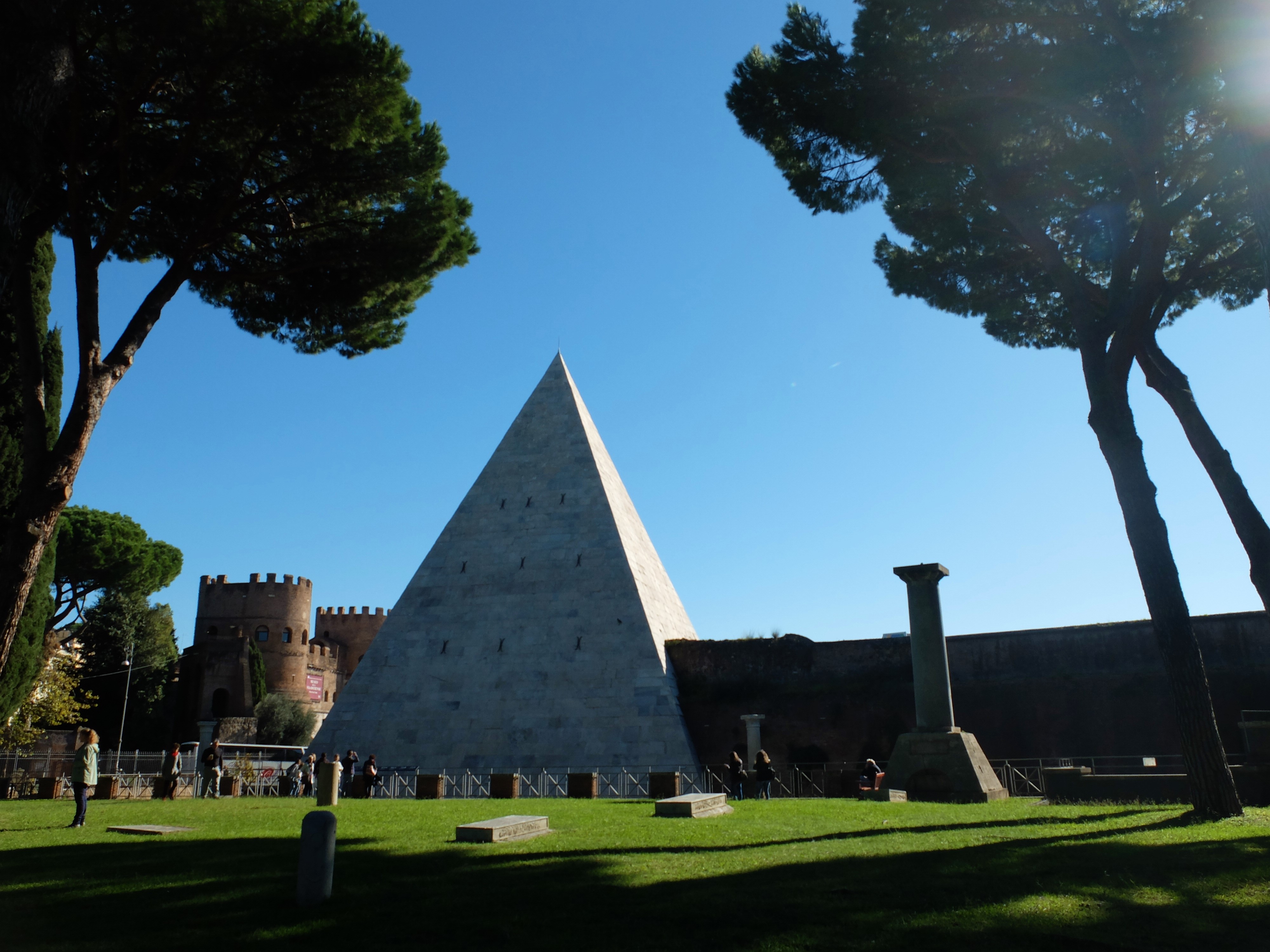 That’s quite a tomb.

How to reach the Non-Catholic Cemetery: It’s opposite the Piramide Metro, and well-served by buses and trams.

Entrance is free but a minimum donation of €3 is expected. The official site can be found here.

Read Next: Excavating tales of the dead in Rome’s Verano Cemetery: Cynthia Korzekwa