The Testaccina project was born  in March 2013, when I broke a bone in my foot and couldn’t walk for a month.

I had already been living in Rome, Italy for about ten years at that time, working as a business journalist. My job involved editing an international investment journal about real estate projects all over Europe. I travelled incessantly; and when I wasn’t on the move, I was on the phone, attending networking events, or hammering out articles at the computer.

Then I was signed off work for a month and instructed not to move by my doctor.

Of course, the first thing I did was open my computer and start answering emails. But that wasn’t the point. I wasn’t supposed to be working! What could I do?

I tried to be disciplined. I exercised in my chair, since I couldn’t stand up. I read for several hours a day, and began tinkering around with some creative writing projects which had been gathering dust on my hard drive. But I also started to sit on my balcony, initially just to soak up some sunshine.

Sun is great for improving your mood and delivers a dose of Vitamin D, both helpful when you’re trying to grow back a broken bone.

It’s probably worth mentioning at this point that my apartment is in the heart of Testaccio, a former working class neighbourhood close to the centre of Rome. The first tenement blocks were built here about 150 years ago, to provide housing for workers at the local slaughter house. Over the last 25 years, Testaccio has gone from being a slightly down-at-heel, edgy neighbourhood to a prime subject for gentrification. Its central location – just five minutes from Circus Maximus, in the shadow of the Aventine Hill – meant that its housing stock has become much more valuable in recent times. So Testaccio is a mix of new and old, its residents pursuing frugal and not-so-frugal lifestyles. 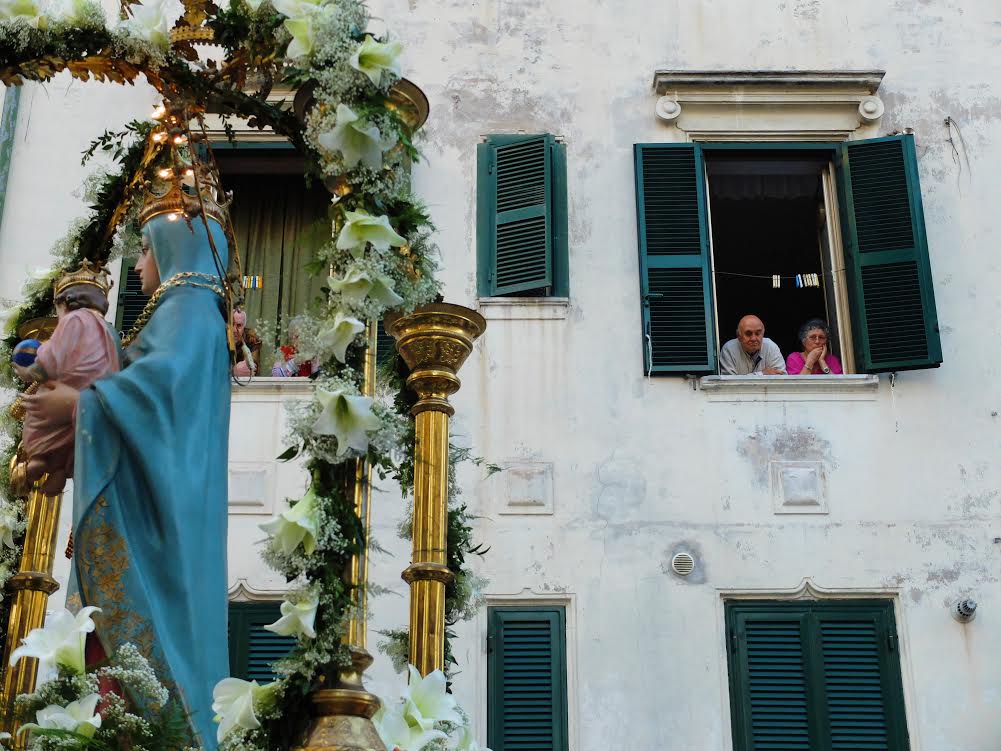 I sat on my balcony, in the weak spring sunshine, and watched the elderly women – the original daughters of Testaccio – muscling along the road from the market with a slightly aggressive air, or strolling back from church with a stiff, ambling gait, in gloves and felt hats. I watched the actors and TV producers reversing smart cars into impossible parking spaces, kissing and raging against their glossy-haired girlfriends and even glossier smartphones.

When I was able to walk again – still not too fast – I hobbled to the market, stopping on crumbling corners to lean against the district’s great, turn-of-the-century housing blocks.  These walls – amber, terracotta, tobacco, sunflower yellow, ricotta cream and artichoke grey – formed the delicate colour palette of my days. I walked back – carefully – from the butcher’s and fresh pasta store, pausing every time I felt a twinge. I was moving slowly enough to see the weeds growing between the paving stones in Piazza Santa Maria Liberatrice, the ants queuing up in an orderly fashion to assail the hibiscus trees in Via Branca, the curling fly-posters slowly turning into papier mâché that celebrated the election of a new Pope.

All of this cemented something I have long believed: stories happen everywhere. My blog, Testaccina, was born, to describe the small things that I saw that somehow became incredibly important to me. There are moments when you realise that life is in the details; that if we can find a way of transforming experience into words, we can start to really communicate with each other, which is no small achievement.

Many years on from the start of that project, Testaccina is taking another step forward. The new website contains not only ideas about visiting Rome and Italy, but also suggestions for visiting Europe and further flung destinations, plus creative advice gleaned from my own experiences and a community of fantastic writers all over Italy (and the world!) for whom blogging has become the first step to a new life. We all know writing is a solitary road at times, but it doesn’t have to be a lonely one.