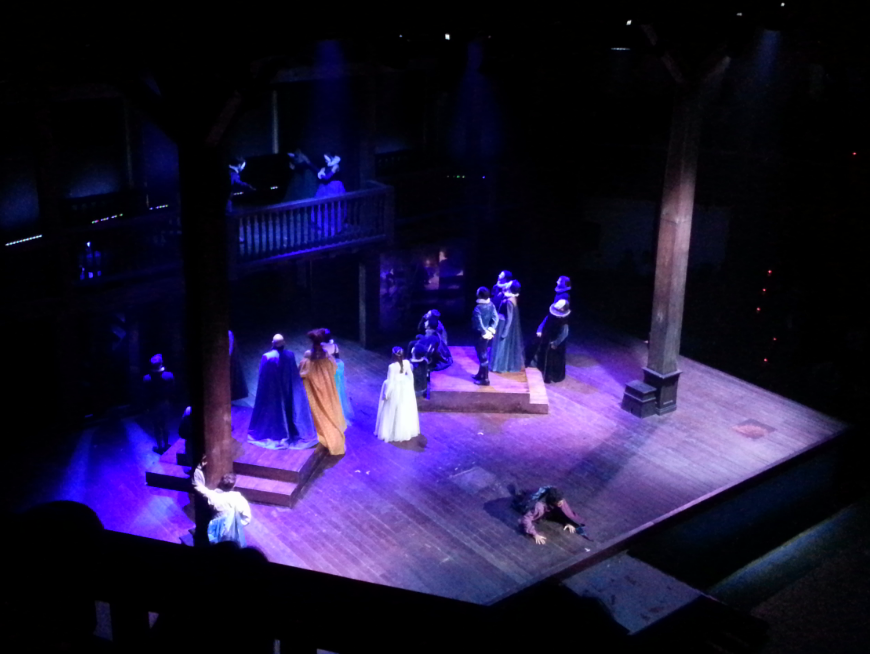 I have always instinctively avoided foreign translations of Shakespeare’s plays. His distinctive language – that runs like a rich seam through idiomatic English – isn’t just the literary trick of putting words in the right order. Shakespeare’s lexicon featured thousands of freshly-forged terms which have survived to this day (scholars estimate that he invented ten per cent of modern English), so to savour his works is to dip into a rich, primordial soup of mother tongue. But I love Shakespeare. There’s a wooden copy of the Globe Theatre in Villa Borghese in Rome (the interior is modelled on the Swan), where legendary Roman impresario and actor Gigi Proietti is the Artistic Director. So I went to see Romeo e Giulietta, the first play in the Globe’s short summer season.

The curtain rises on a scene evoking something between Tor Bella Monica and Corviale, tough neighbourhoods in contemporary Rome. Disaffected youths slink onto the stage in belligerent mood, until posturing thumb-biting between the Capulet and Montecchi (Montague) clans escalates into a short, brutal fight. The Prince with his CIA-styled guards demands that the families work on keeping the peace, but the tone has been set: here, an aptitude for violence and strength in numbers are the only qualities that ensure one’s survival. It is a message which remains to the end of the play.

Romeo and Juliet are, in one sense, such archetypal Italian lovers that the transition into the local language is an easy one to stomach. Romeo (played by Matteo Vignati) is slight and boyish, but his perfect coiffure and swagger – one third in love with himself, two parts the hopeless romantic – make him immediately likeable. In this city of fighters and close-families (knotted even more tightly, like scar-tissue, from repeated reactions to verbal slights from their rivals) he is a natural hero. But he remains too exposed and too at odds with societal norms to survive the final act, despite being handy with a sword.

After the youths change from hip-hop inspired contemporary clothing into Elizabethan dress for the Capulets’ Masqued Ball, the tempo tightens. Now we are plunged into a Marlowe-esque world of muttered threats and tavern brawls, where the slashed sleeves of the players seem ribboned by battle. Romeo will not change again until his death, wearing a simple, white doublet and breeches as he becomes husband and hero, surrounded by the peacock threads of his clan and Juliet’s jarringly nouveau riche family. He refuses to fight (twice); he tries to keep the peace. But in the end, familial loyalties and a vain attempt at self preservation lead him to kill both Tebaldo (Tibalt) and Paride (Paris), the latter of whom is a whey-coloured version of Romeo, another sworn lover, who equally has no chance of surviving this belligerent society.

Juliet (Mimosa Campironi) is a perfect child; happily self-obsessed, occasionally foot-stomping and shrill, but full of courage. From the moment she risks being married (a second time) to Paride, she is ready to die rather than betray Romeo. For all her piercing tirades and odd sulks, she is the bravest of all in death, stabbing herself with a dagger with an excruciating physicality. Not for her, the sleep of poison or a battle wound; she has to push in the blade herself.

Linguistically, a great part of the puns from the original English are lost, but, according to local Shakespeare expert Alessandro Rubinetti, the translation sourced by Gigi Proietti from Angelo Dallagiacoma is one of the most faithful in existence, and indeed preserves some of the verbal gags and creates new puns, while stretching to the original beats of iambic pentameter (although this is rarely perceptible in performance). Rolled over the tongue of Mercuzio (Mercutio), the tirade on Queen Mab or the teasing of Romeo are exhilarating speed-induced diatribes prickling with plenty of bawdy jokes, cockerel-crowed with an extraordinary vocality from the excellent Fausto Cabra, who has a thrusting swagger to match. There are plenty of great supporting performances, from the hilarious friar to even the poison-selling apothecary, whose moment of moral dilemma weighed against his poverty delivers a perfectly rounded character in under four minutes. One slight disappointment is the music, which is a recorded soundtrack (apart from Malvolio’s charming lute solo and a moment of virtuosity from piano-playing Juliet) drowning important scenes (the acoustics aren’t great either) with rather banal Classic FM-style orchestral bursts of pathos. Even the beatboxing of the disaffected Montecchi youths goes one scratch too many and almost seems dated. More original instruments and low but intense live sounds would be welcome.

Overall, if you love Shakespeare, it’s definitely worth a look at this thoughtful staging and characterisation. Next up this season: A Midsummer Night’s Dream, following by Richard III and a studio version of Lear. Can’t wait.