Romantic Rome holidays: all you need to know

Romance and Rome can’t help but go hand in hand. If you’re planning a trip to Rome and you’re looking for somewhere romantic to take a stroll on Valentine’s Day, pop the question or simply say I love you, the city has a natural gift for putting lovers at ease. From picturesque cobbled neighbourhoods to sunset-tinged ruins, there are plenty of stunning sights to get anyone in a sentimental mood in romantic Rome.

Despite that, it can be easy to get it wrong as well. While I personally love taking a stroll past the Colosseum at sunset, your history-buff partner might be distressed by the thousands of Christians and slaves that were put to death in this blood-steeped amphitheatre of horror. Equally, while a pretty church might inspire peace to one gentle soul, your atheist girlfriend might be triggered by the multiple crucifixes. Piazza Navona is a gorgeous destination, but choose the wrong day and you’ll be battling through a whiff of sweat-soaked crowds whilst enduring a tender groping from your friendly local pickpocket.

Read on, then, for the foolproof Testaccina guide to Rome’s most romantic destinations. If you can’t get him / her to say yes in one of these places, it’s all on you!

The Orange Grove on the Aventine Hill (Giardino degli Aranci) is one of the most beautiful vantage points in all of Rome, and remains open after sunset in the spring and summer, which means you can catch the prettiest time of day here and avoid the crowds. During daylight hours, and particularly when the weather is good, Rome’s Orange Gardens are busy with tourists and travellers trying to get the perfect photo of St. Peter’s dome, which is perfectly silhouetted on the horizon opposite the Aventine Hill, known in Rome as the Aventino. If you pick your moment however – I recommend early in the morning, or late afternoon on a weekday – you should find a quiet corner to relax and admire the view. The Orange Gardens on the Aventine are definitely one of Romantic Rome’s sweetest destinations. View from the Aventine Hill

The Janiculum Hill is another beautiful vantage point in Rome for enjoying stunning views across the city. Further south and virtually opposite the Aventine Hill – as well as being much higher – it’s worth the walk up the Janiculum or catching a bus to hang out at the top and admire Rome’s rooftops. There are refreshments available here from mobile vans but it’s the standard tourist fare, so plan to bring your own prosecco and picnic hamper. Try not to get into an argument about Garibaldi – whose death for the Italian cause is immortalised by a huge statue on the top of the hill – or sidelined by Mussolini’s fascist monuments – and you should be good to go! Admiring the view from the Pincio on a sunny day

A short stroll above Piazza del Popolo lies one of Rome’s most impressive parks, Villa Borghese. Built on a natural hill above Rome’s historic centre, the park culminates in a sweet terrace that hangs above Piazza del Popolo known as il Pincio. Romantic Rome doesn’t get much more romantic than this, particularly if you make a beeline for the Pincio as evening falls, to watch the lights go on across the city. Avoid sitting on the grass (dog turds, and bitey ants) and remember your mosquito spray in the summer. If you’re feeling particularly love-struck, there’s also a boating lake in Villa Borghese which is the perfect chance to flex your muscles and show your competence at navigating an ornamental pond. While the Spanish Steps and the square at the bottom of the steps – Piazza di Spagna – are often overrun by crowds of tourists, the height and effort involved in climbing said steps rapidly seperates the men from the boys. Make your way up to the top of Spanish Steps to stand in front of the church of Trinità dei Monti and look across the city, timing it for sunset if you can. This is my favourite place for watching the sun set over Rome as you really see a wonderful side to the city in one of Rome’s prettiest corners. If you don’t have the energy, you can reach the top by using the lifts within the Spanish Steps Metro station. Romantic Rome at its finest. 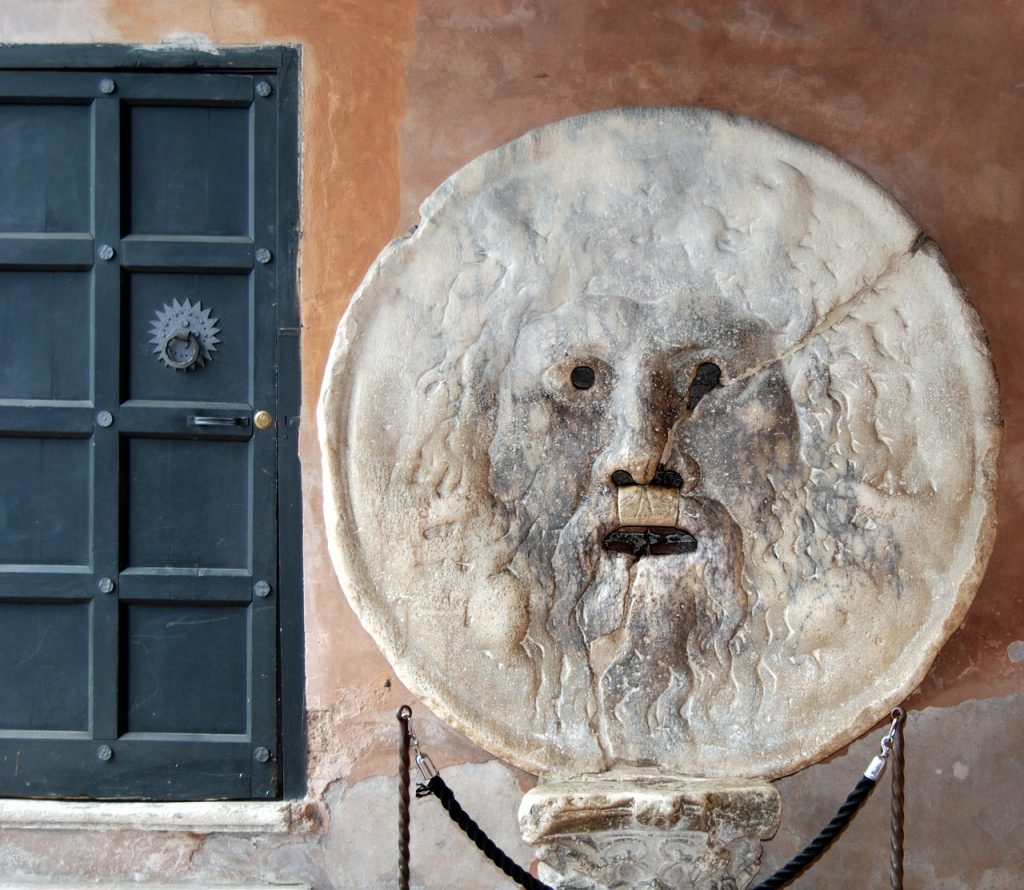 Rewrite those wedding vows: ‘I promise to tell the whole truth, and nothing but the truth, so help me God.’

Two of Romantic Rome’s most famous fictional lovers – Audrey Hepburn and Gregory Peck in Roman Holiday – really showed how to have romantic fun in the city of Rome. After you’ve explored Rome by Vespa (more tips and tricks for driving a Vespa in Rome here) you should really take your partner for some light-hearted fun at the Mouth of Truth. Gregory Peck mimed getting his hand bitten off here but I’m sure you can go one better – why not bring up all those controversial arguments that have been festering all holiday in the name of honesty? After you’ve wrangled the truth from your beloved at La Bocca Della Verità, I suggest taking them to see the shrivelled remains of St. Valentine in the church next door, Santa Maria in Cosmedin. Actually, these days there’s only a toothy skull left of this particular saint. At this point, try uttering some Godfather-inspired thinly-veiled threats and cement your love story once and for all in romantic Rome. Now that’s amore. <3 Rome blogger Isobel Lee