The snow in Rome in February 2018 will be remembered not only for being pretty as a picture, but also for the brevity of its magical stay in the Eternal City.

As the Siberian weather front blew through Europe, there was a sense of incredulity in the Italian capital about whether snow would actually settle in Rome.

But settle it did, on the night of February 25th, leaving plenty of children (and a fair few adults) gleefully waking up on Monday morning with schools closed and the city dusted in sparkling white snow.

But for those that wanted to enjoy Rome in the snow, there was no time to lose. With brilliant sunshine forecast for midday, it was a race against time to capture the city dressed in its winter best, before the moment melted away.

2018 Snow in Rome: Testaccio in the snow

Before I even opened the blinds in the morning, I knew that the snow had come. The sounds of the street were strangely deadened; voices like the cries somewhere above when you swim underwater. As I hauled up the wooden slats, the powerful, electric light of the snow gleamed into the room. Thick flakes piled onto my balcony and fluttered down past the window, swirling in the piazza where children and dogs were already having the most fun. 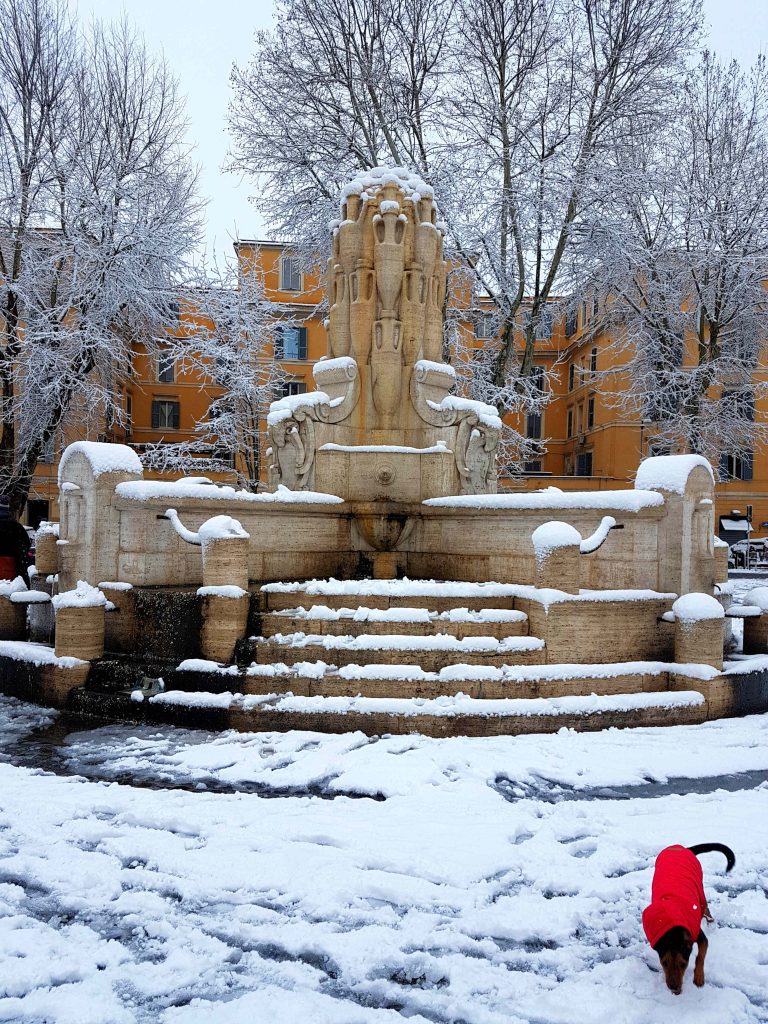 There was a tangible sense of excitement in the air as I rushed outside to see Rome in the snow. It was an ordinary Monday, and yet nothing was ordinary. The snow in Rome had brought a new majesty to the city, trimming pavements and awnings with pure ermine. 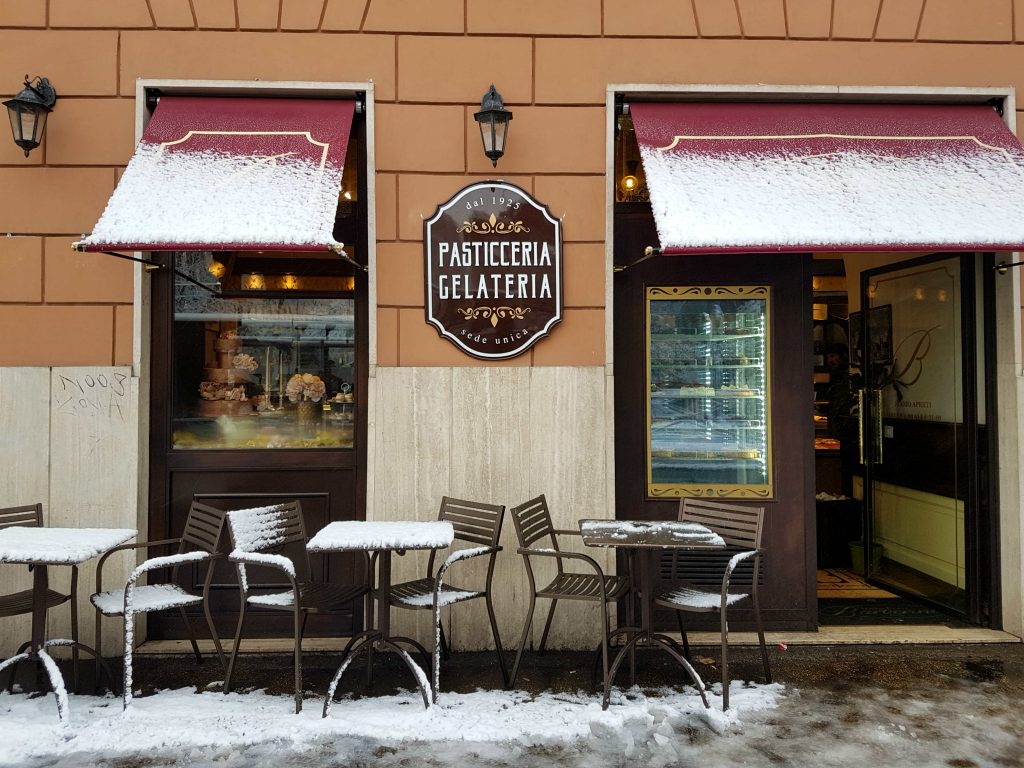 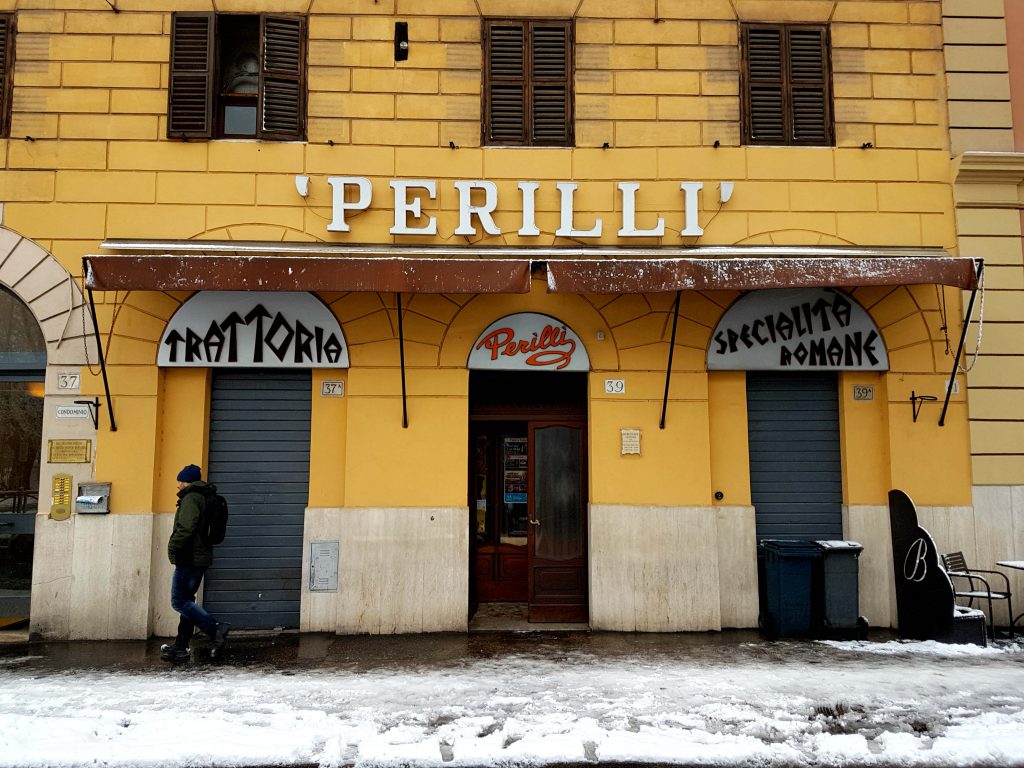 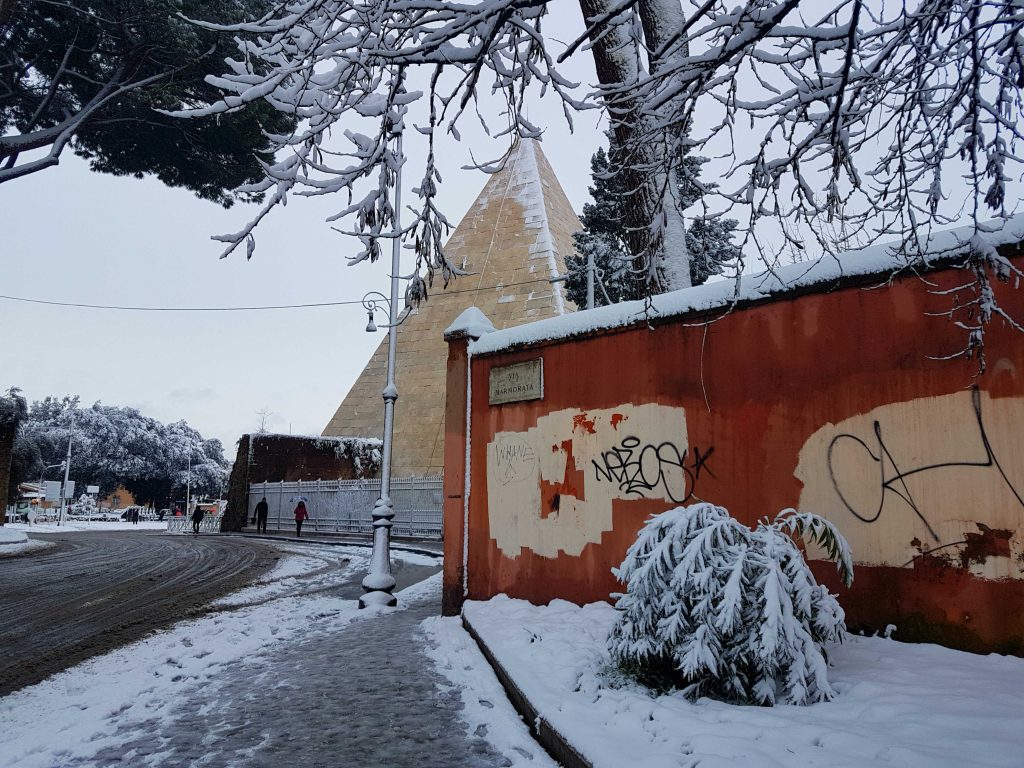 Testaccio’s remarkable pyramid looked no more out of place than usual, accessorizing with a dusting of the white stuff to keep in theme with the rest of snowy Rome. 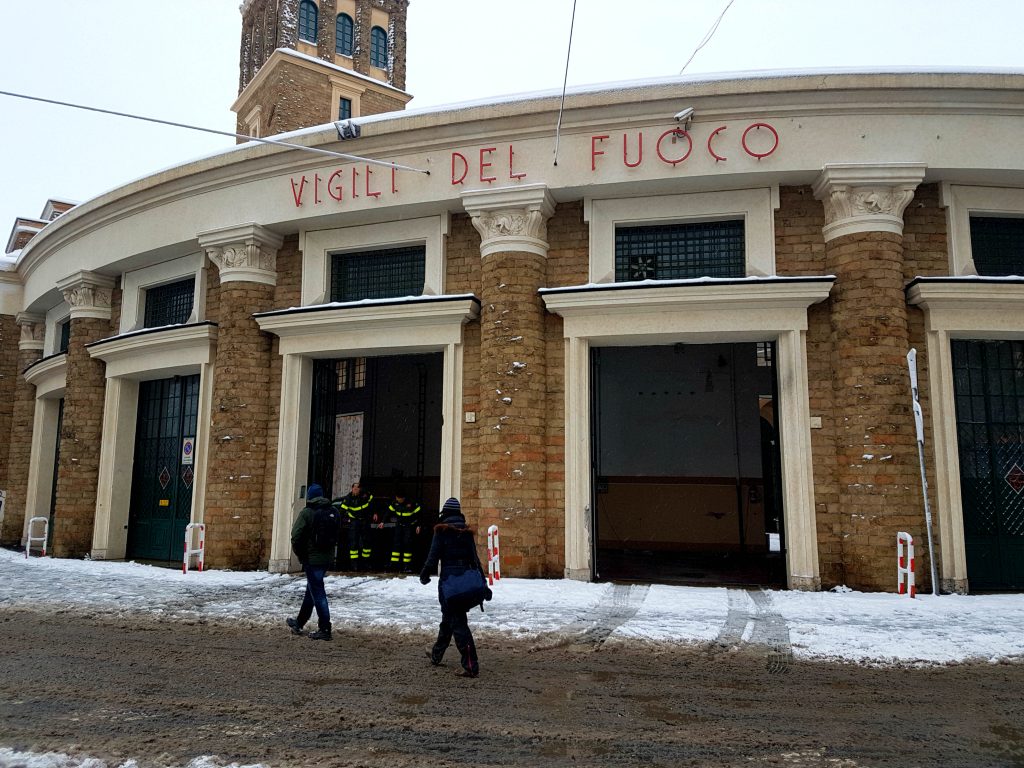 Even the local fire brigade had a spring in their steps as they cast salt on their driveways to combat the snow in Rome. I crossed Via Marmorata and started walking up the hill towards the Aventine, one of Rome’s seven hills, which promised breathtaking views across the snowy city. 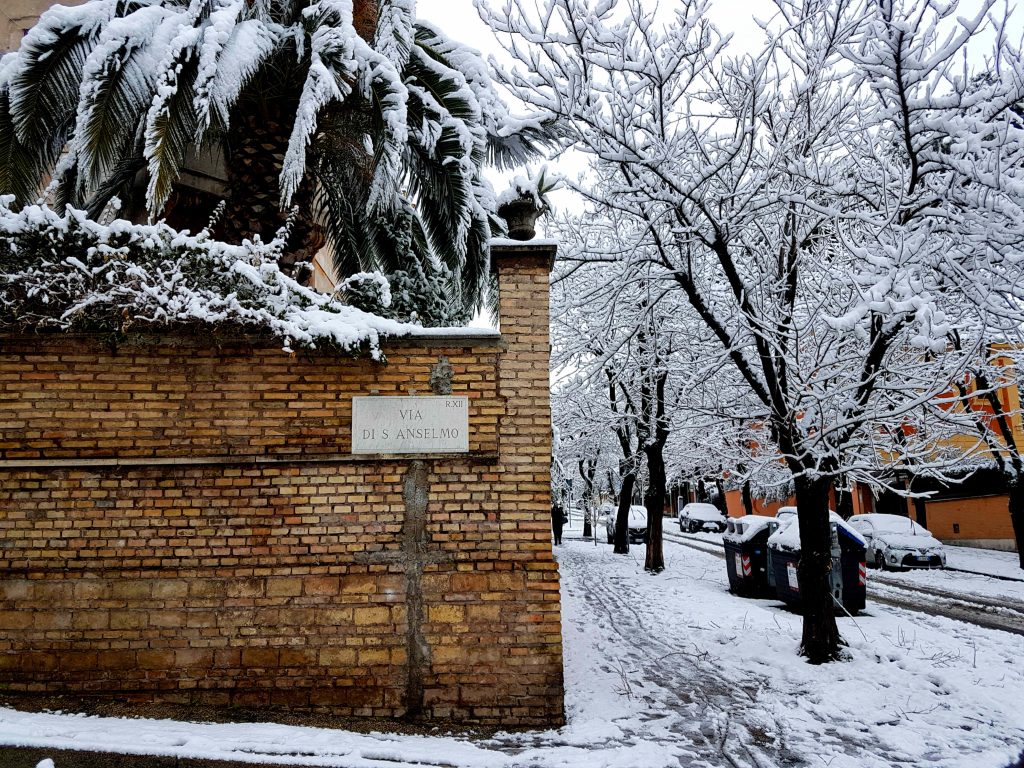 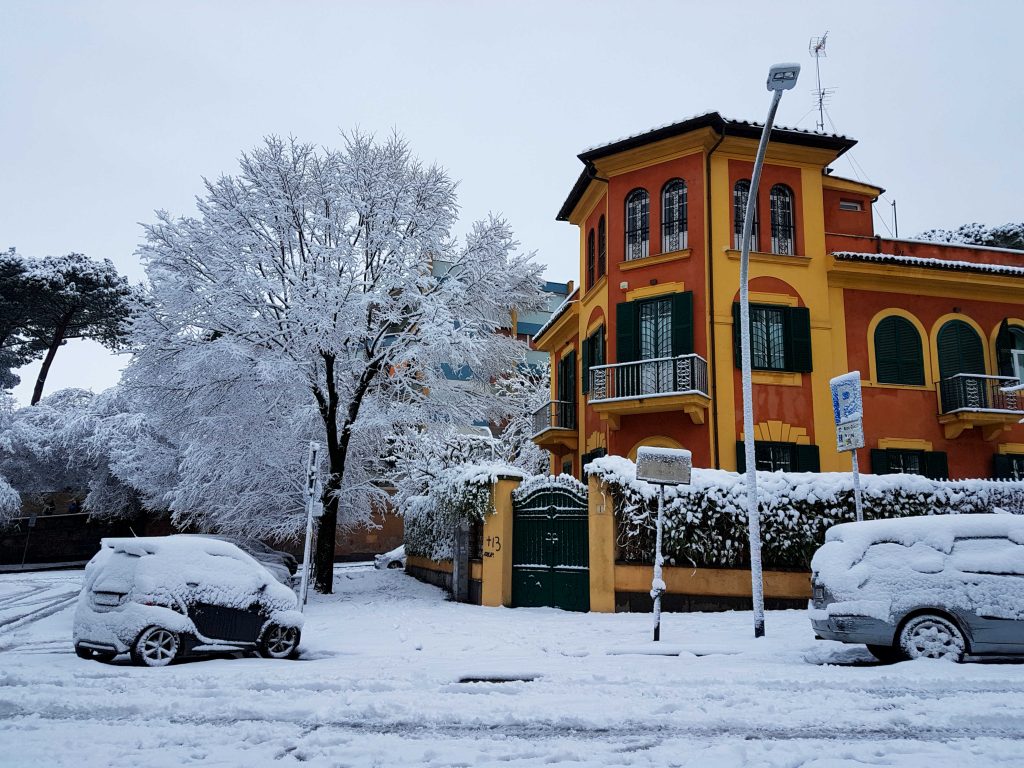 Unsurprisingly, the stately Aventine district was keeping it classy, with its bright orange and gold villas rising with their bold colours from the monochrome snow. Trees, furred with white, bowed under the weight of the snow. Rome in the snow was definitely not disappointing. 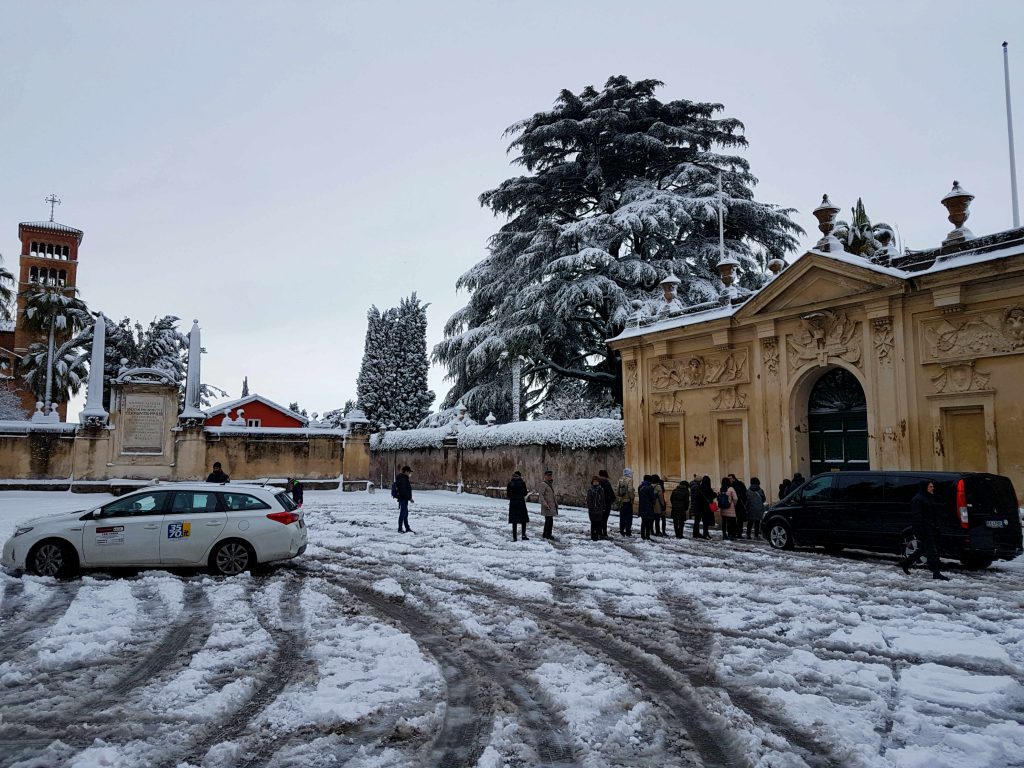 I wasn’t the only person to have the idea of going to visit the villa of the Grand Order of Malta on the Aventine hill. The curious lined up to peer through it’s keyhole, no doubt spying snow-covered branches arching over the dome of St. Peter’s. I had no time to lose, with the rest of Rome in the snow to explore, so I reluctantly skipped the wait and continued to the Aventine’s famous orange groves. 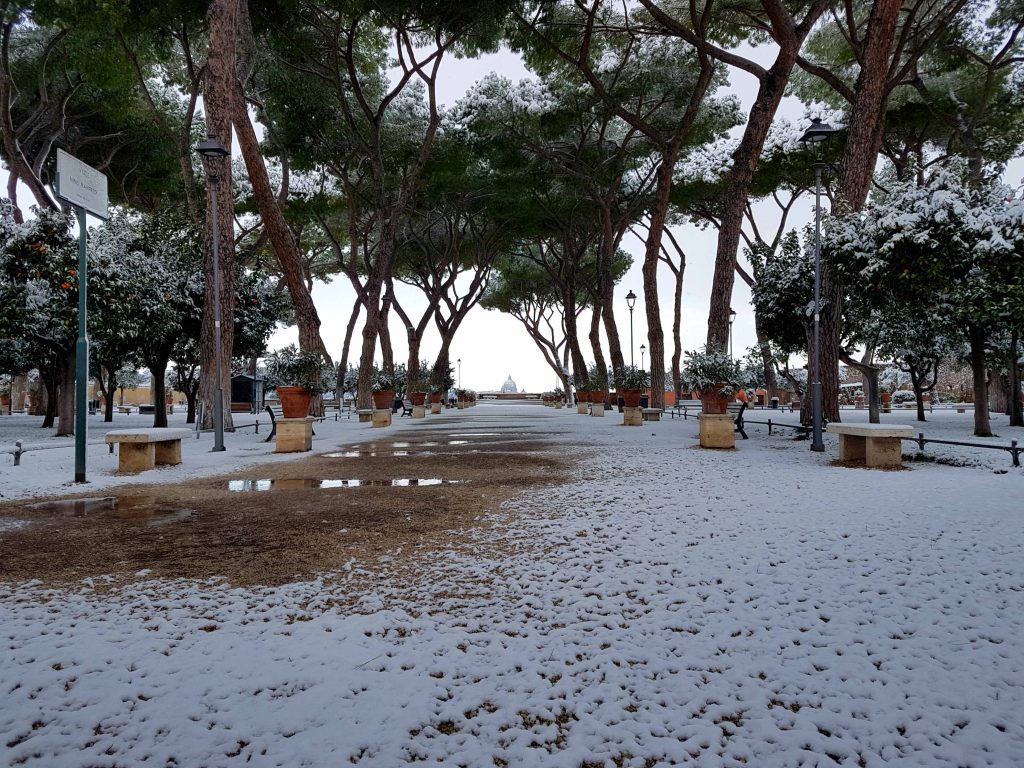 All the Roman parks were closed due to the snow in Rome, but the gorgeous orange groves on the Aventine hill fortunately have a gate in the wall right in front of its most breathtaking vista. I leaned through the bars to photograph this most serene corner of Rome in the snow. 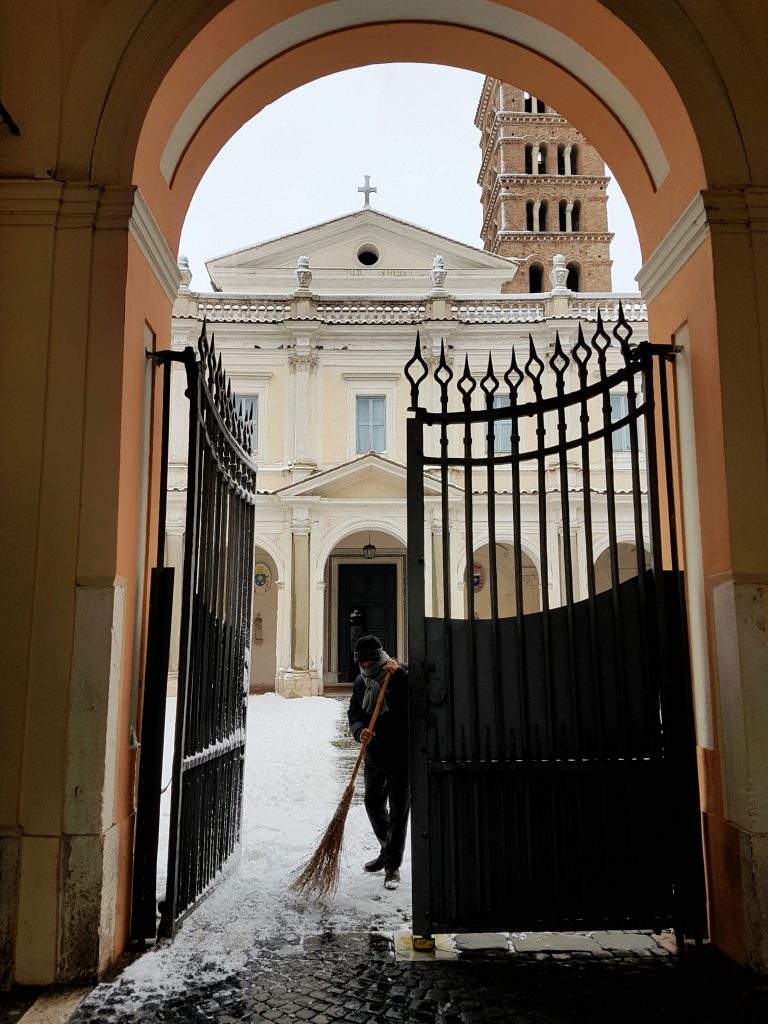 At the church of St. Anselmo on the Aventine, staff worked to clear the courtyard as the snow subsided. It was still cold, but as the flakes stopped falling, I started to believe that the snow in Rome really wasn’t going to last that long. 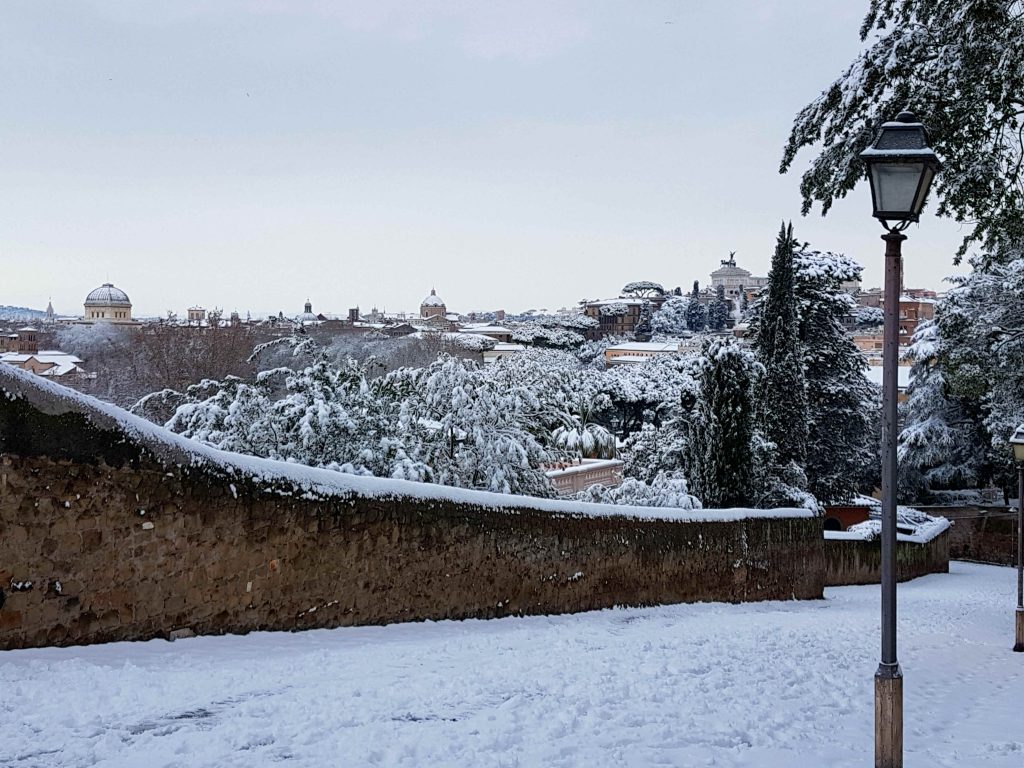 I walked to the far side of the Aventine hill and peered down one of Rome’s most ancient streets, the Clivo di Scauro. This affords extraordinary views of the city on the best of days – so imagine the vistas of Rome in the snow! I still hadn’t come across that many people, but all that was about to change.

I started back down the hill, cheered by the sight of people playing in Circus Maximus. Locals had turned this site into a sledging park, making the most of its steep sides to enjoy the most fun you can have with a sheet of plastic. This isn’t a city where people have sleds in the shed, so this was all about an imaginative use of plastic bags, plastic sheets, wooden crates and snow boards. 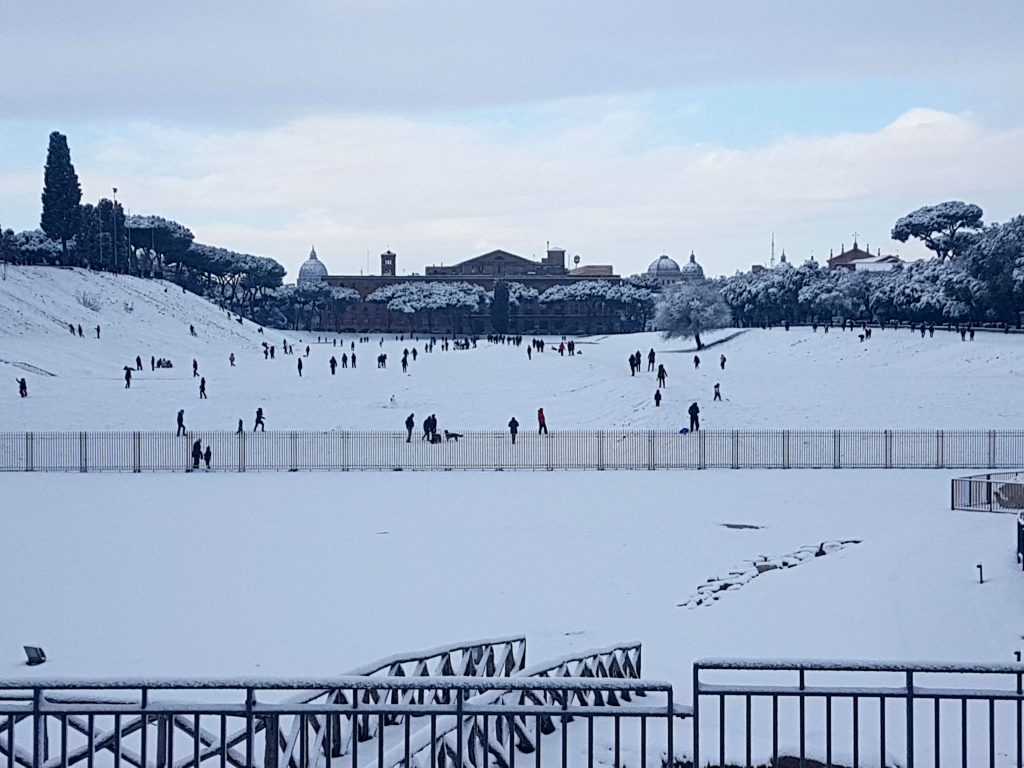 2018 snow in Rome: snow at the Colosseum

I thought I’d find plenty of people at the Colosseum enjoying the snow in Rome, and I wasn’t disappointed. This was perhaps the most popular spot for a snow selfie, with Rome in the snow really showing itself off to its absolutely best amongst its ancient monuments. 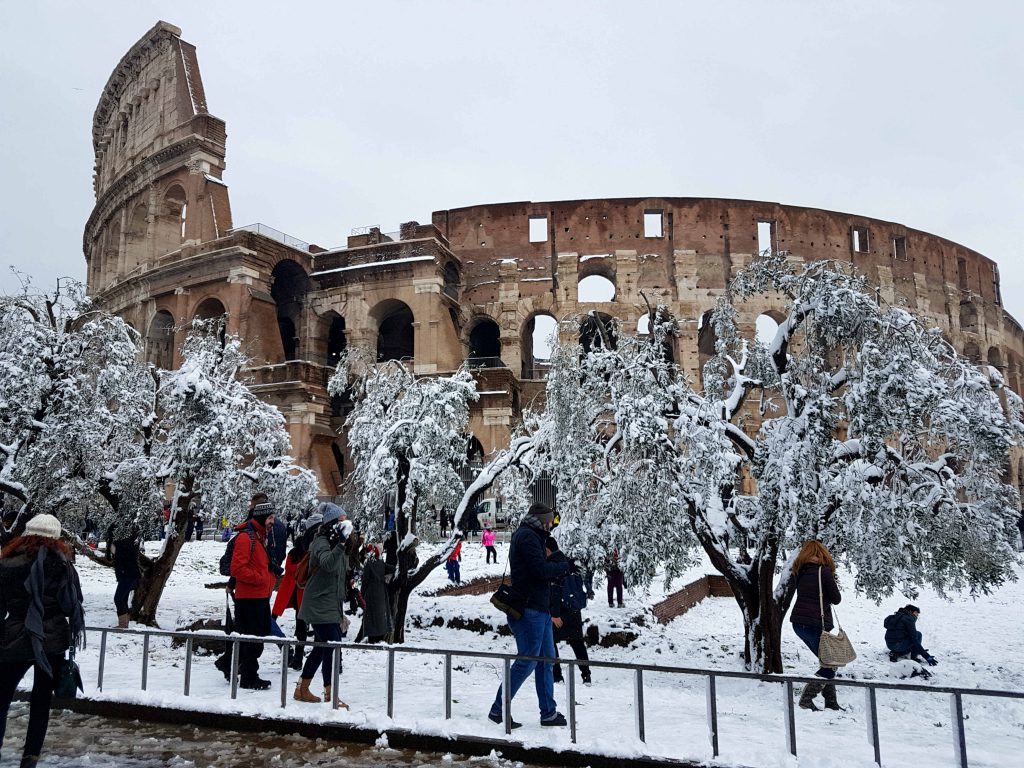 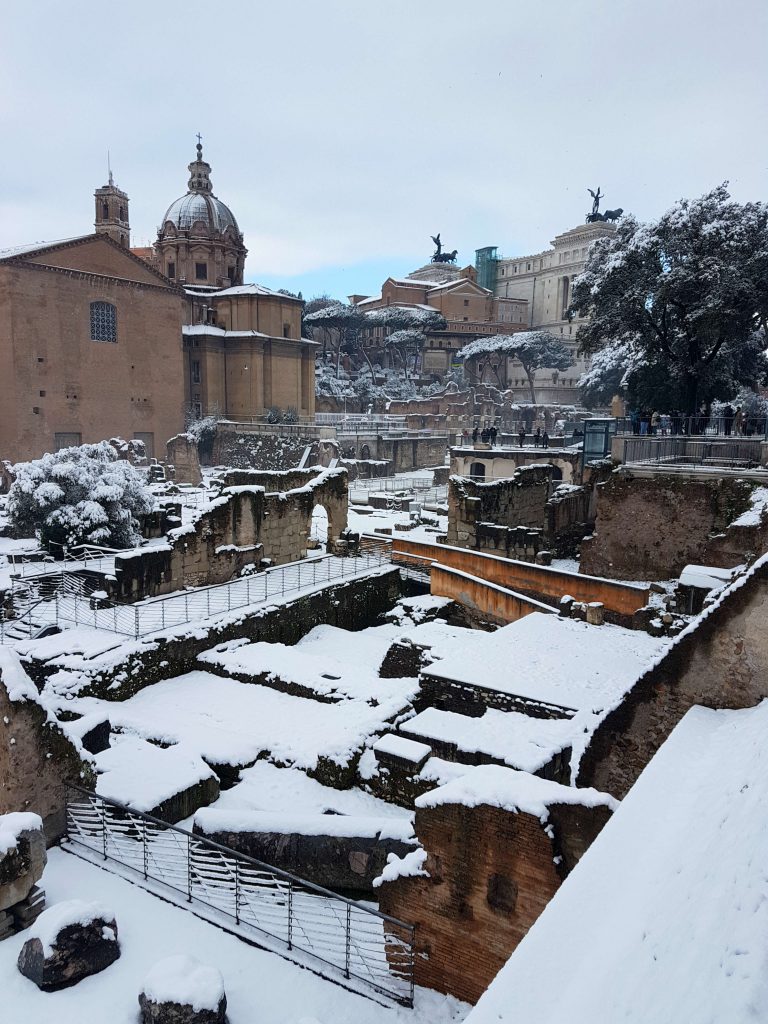 The Roman Forum, next to the Colosseum, also looked as if it had been absolutely made for a dusting of snow. Rome in the snow was just getting better and better – but the roads were also clearing rapidly and I knew I was in a race against time.

Despite finding a little more chaos in the centre, Rome in the snow was still looking mighty fine. I dropped in on my pals at Ristorante Alfredo alla Scrofa, where snow was still persisting on the signage and the dwarf palms in the square. Pretty as a picture! 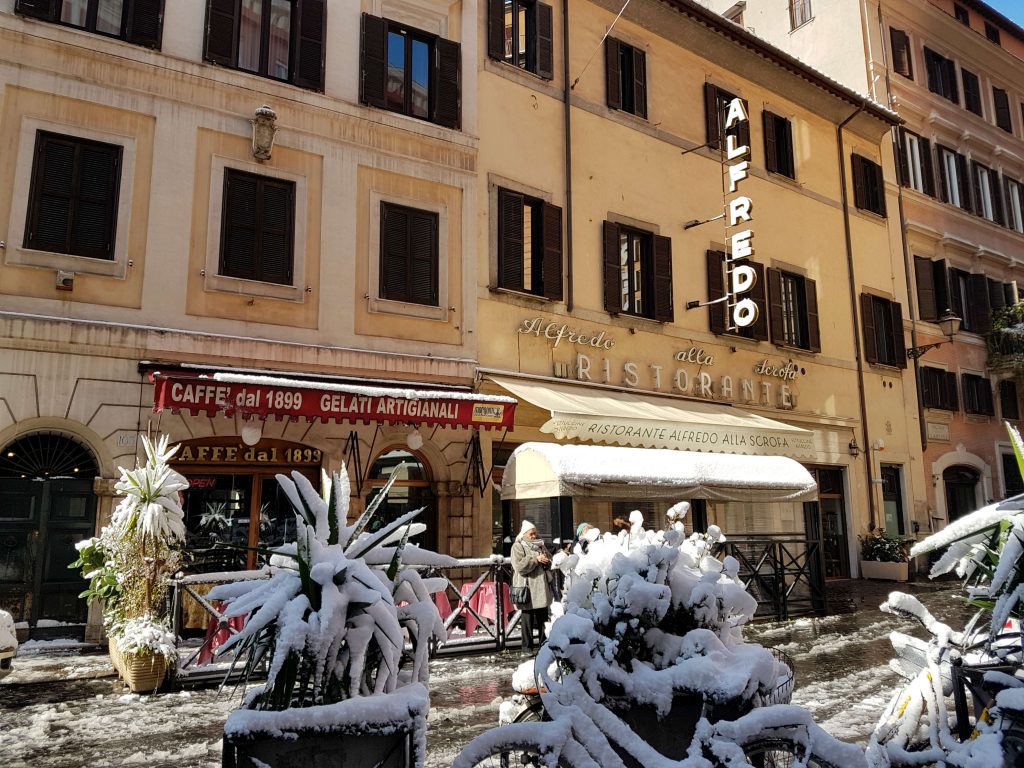 2018 snow in Rome: the Pantheon and Piazza Navona in the snow 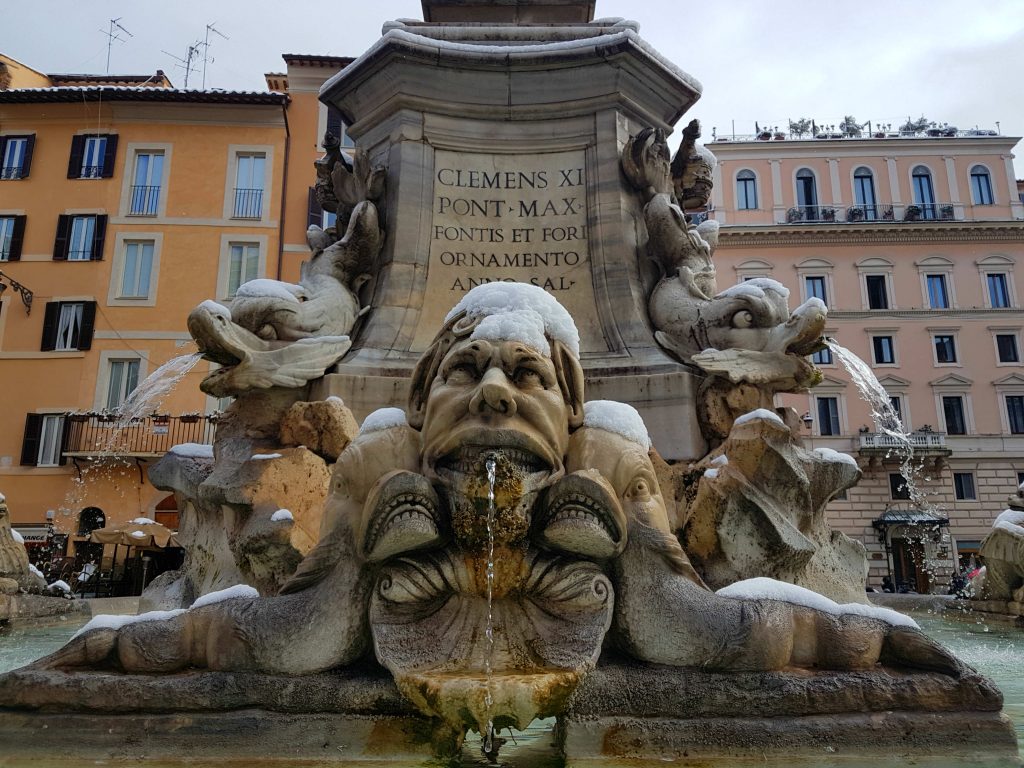 The grotesque statues on the fountain in the middle of Piazza del Pantheon looked perfectly resigned to the covering of snow on their stone heads. Equally, Piazza Navona was keeping it classy, with its baroque palazzi looking prettier than ever against a backdrop of snow in Rome. 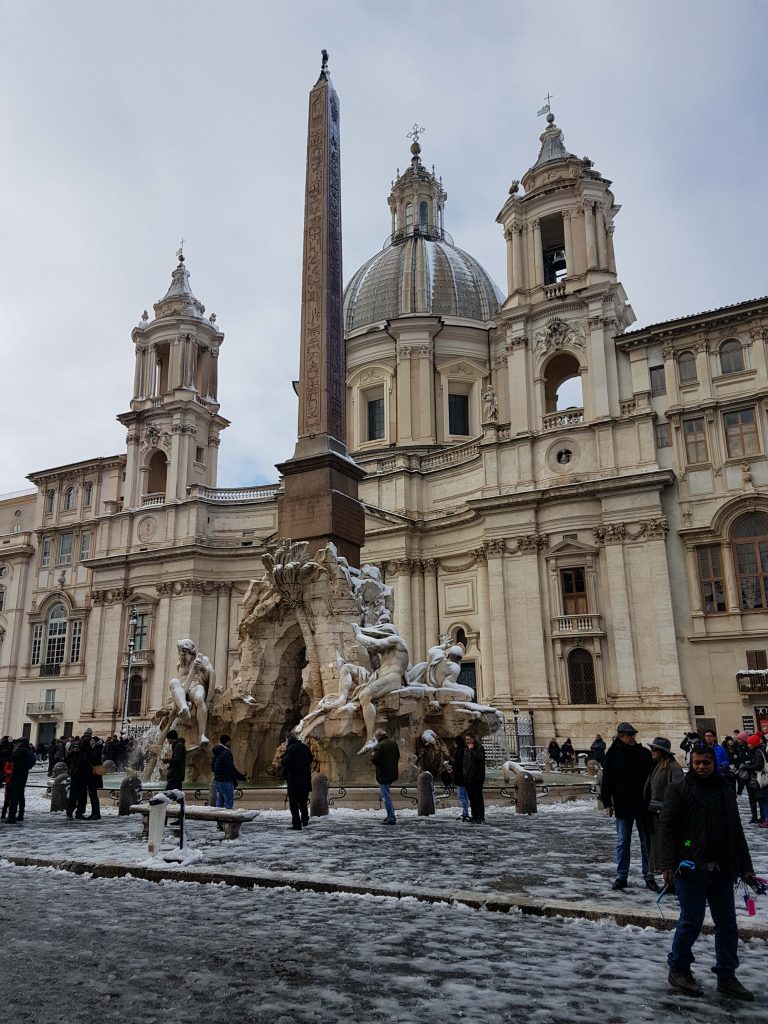 2018 snow in Rome: the Spanish Steps in the snow

The sky started to clear as I walked down via dei Condotti and towards the magnificent Piazza di Spagna. The remnants of snow against the monuments and the bright blue sky looked absolutely stunning. It was almost 11.30am, and the sun was starting to win the battle against the snow in Rome. 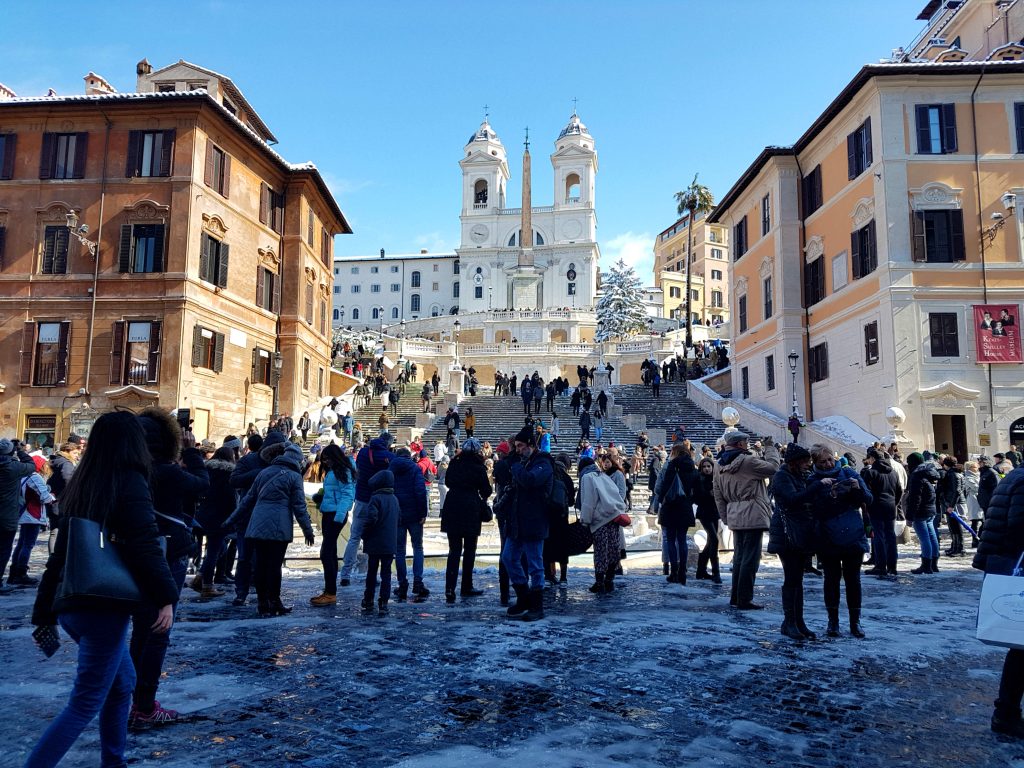 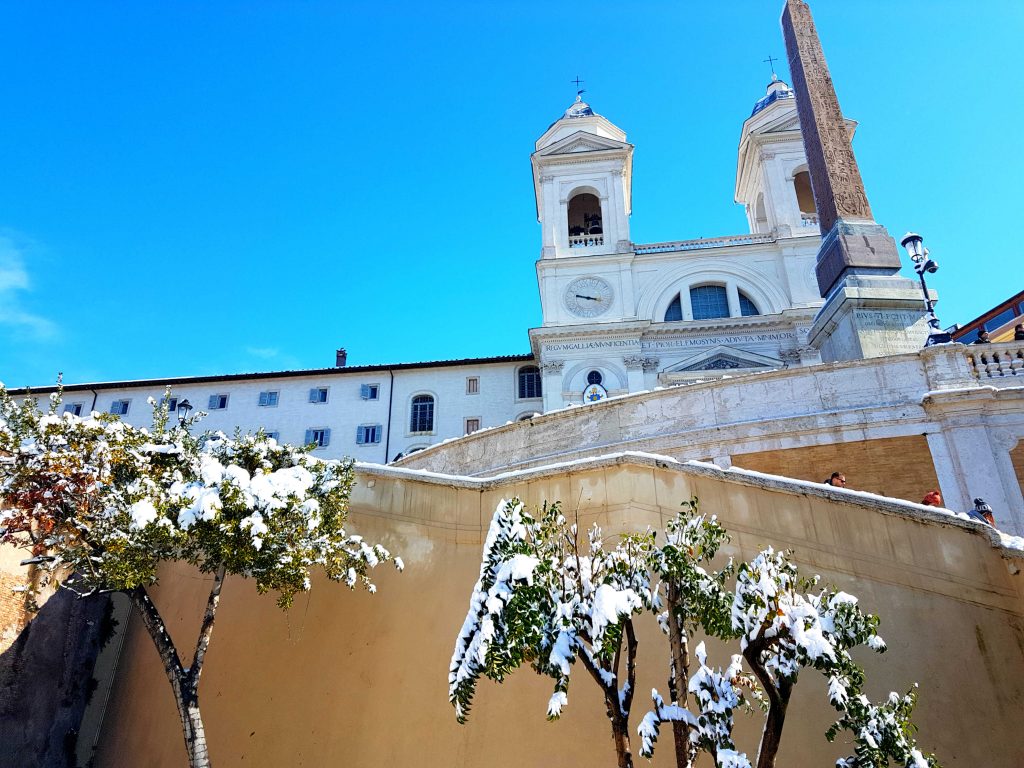 It only remained to climb the Spanish Steps and see what Rome in the snow looked like from above, at the gorgeous vantage points of Trinità dei Monti and the Pincio, the lookout from Villa Borghese. 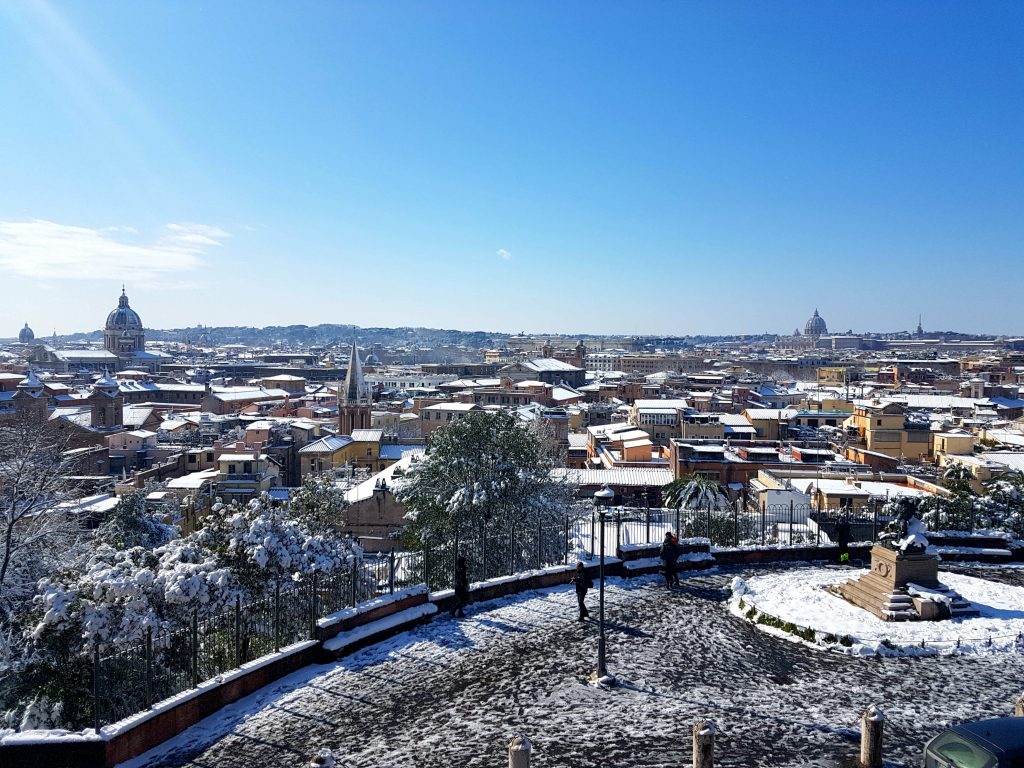 Rome in the snow from up here didn’t disappoint. Despite the midday sun getting the better of the rapidly melting snow, the snow in Rome still looked magnificent, with the snow-covered domes of San Carlo (left) and St Peter’s in the Vatican (right) providing perfect photo material for decades of Christmas cards to come!

Read next: 15 Instagram images to inspire you to visit Rome