Typical food in South Tyrol: 10 things to eat in Bolzano

Typical food in South Tyrol is unlike anything you’ll eat in the rest of Italy. This unique, German & Italian speaking part of Trentino-Alto Adige, located at the northern border of Italy, right next to Austria,  combines Austrian, Italian, and even Swiss influences to create a nourishing cuisine which suits the extreme winter weather found here.

If you’re curious about the best things to eat in Bolzano, please note that this guide also covers the neighbouring towns, as typical food in South Tyrol is happily, pretty similar all over the region.

That means you can head to the region’s principal town of Bolzano (Bozen) to try a range of typical South Tyrol food, but don’t overlook destinations such as Merano (Meran), Bressanone (Brixen), or Brunico (Bruneck).

While South Tyrol is the term most commonly used in English for the province, it is also known as Alto Adige in Italian (or Sud Tirol), and is one of the two autonomous provinces that make up the autonomous  region of  Trentino-Alto Adige / Südtirol.

Created from a portion of the southern part of the historic County of Tyrol, a former state of the Holy Roman Empire and crown land of the Austrian Empire of the Habsburgs, this territory has experienced constantly shifting borders over the centuries, which explains why the typical food in South Tyrol is so special and so infused with different influences.

The land was assigned once again to Italy after the Second World War, on the condition that the region would be bilingual Italian-German, and that the German speaking population would be granted a significant level of self-government.

For the casual traveller, the effect is one of experiencing a rather Austrian atmosphere set off by Germanic architecture and cuisine, tempered by a an Italian approach which finesses the food and ensures that it is served with the very best wine.

History lesson over, let’s get on with the food!

If you can visit Bolzano during its annual Christmas market (usually December 8th – January 6th) this is an incredible way to casually taste your way through the region’s cuisine across a range of stalls, conveniently located all in one place.

But don’t worry if you don’t manage this – the town hosts permanent and temporary food stands all year round, many spread through the city and focusing in particular on bread and baked goods.

There’s also truly a baker’s shop on every corner in Bolzano, selling seeded German-style breads as well as sugared rolls and freshly made sandwiches. These are great spots to drop in for a quick breakfast or lunch and try some of South Tyrol’s most typical food.

One fun fact: a lot of restaurants are closed in Bolzano on Sundays and a surprising amount are shut on Saturdays too. Places which are open at the weekends are marked below.

The oversized, freshly baked pretzel, studded with rock salt, is a familiar site in Munich and Germany’s Bavaria region. You might not know that they’re also a popular snack in Bolzano and South Tyrol. While in Germany’s Bavaria they’re often paired with white, veal sausages – Weisswurst – and a Weissbier, in Bolzano they’re useful pick-me-up snacks at any time of the day.

You also see particularly large ones sliced in half and filled like a sandwich with cold cuts and salad (although in our experience, the loop of the pretzel makes these fillings a bit leaky!) Grab one to go as an alternative breakfast if you’re not a fan of sweet things in the morning. Just delicious and a very typical South Tyrol food or snack to eat when visiting Bolzano.

Where to eat in Bolzano: at the Bolzano Christmas market or takeaway from Panificio Grandi, via dei Bottai 18, Bolzano 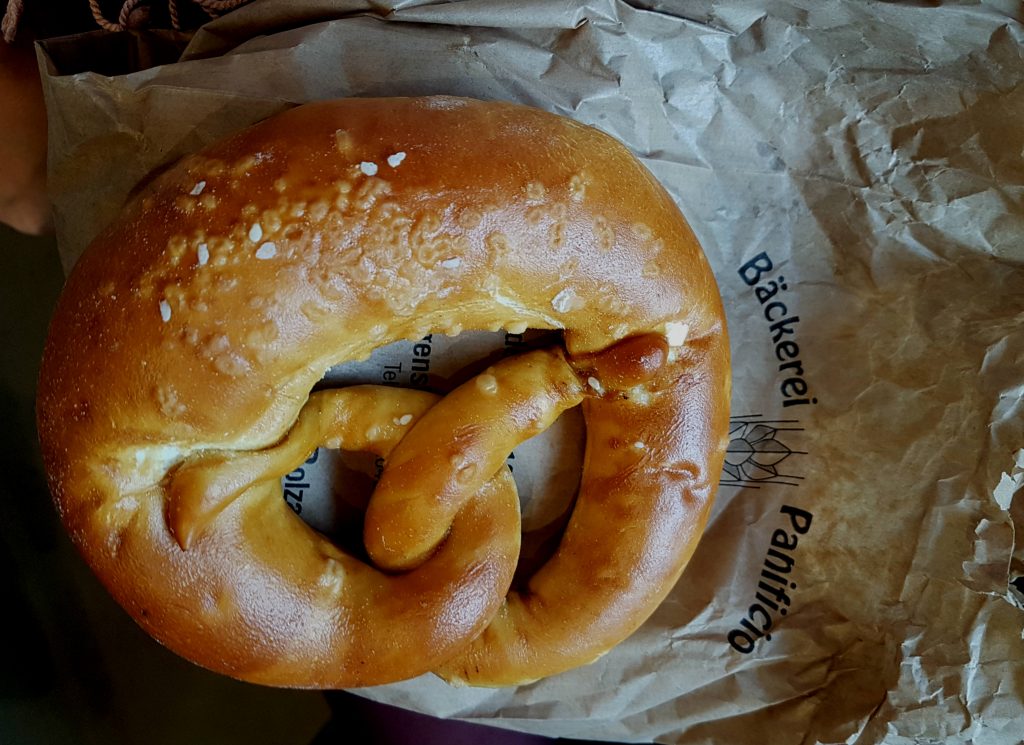 While the Italian delicacy of polenta is eaten right across the north of the country – and to be honest, throughout Italy, during the winter months – it is particularly popular in South Tyrol / Alto Adige and is uniquely served with a range of sauces that suit Bolzano’s altitude and the cold winter weather.

Simply made from finely ground corn semolina (hence its yellow colour – remember, regular semolina is made from wheat) whisked with water and cooked in a pan, polenta is to the north what pasta is to the south – a versatile, porous carbohydrate which comes to life when paired with the right dressing.

In Bolzano’s Christmas market, we tried polenta with beef goulash and polenta with sauteed wild mushrooms plus a slab of creamy gorgonzola (see main image). Very typical food for South Tyrol and just the thing to eat in cold weather!

Where to eat in Bolzano: at the Bolzano Christmas market or at Hopfen & Co., Piazza delle Erbe 17,  Bolzano OPEN SUNDAYS 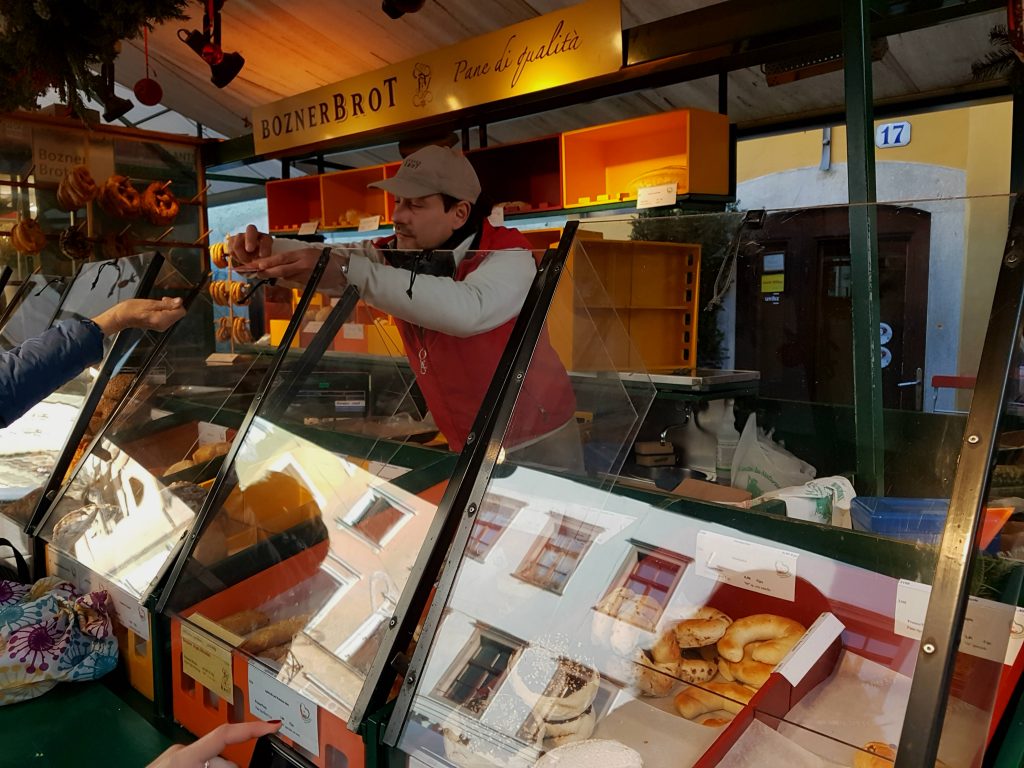 When I said that there’s a baker on every corner in Bolzano I wasn’t joking. But not all bakers here are the same, and we found it sometimes difficult to find our newly-discovered favourites in every store.

Traditional brew-pub Hopfen & Co. runs its own bakery stall in the open-air on the corner outside the restaurant (remember, brewing and baking often went together as traditional crafts in the past, due to the presence of yeast) and their goodies are amongst the best in town.

For a sweet breakfast bun to go, try one of their chocolate filled krapfen, a baked doughnut, less fat-laden than their deep-fried cousin but tasty and filling on a cold morning. I developed a particular fondness for apfel rollen, spirals of sweet pastry filled with baked apples and topped with icing and golden walnuts (pictured below). Filling, delicious, and just about good for you! 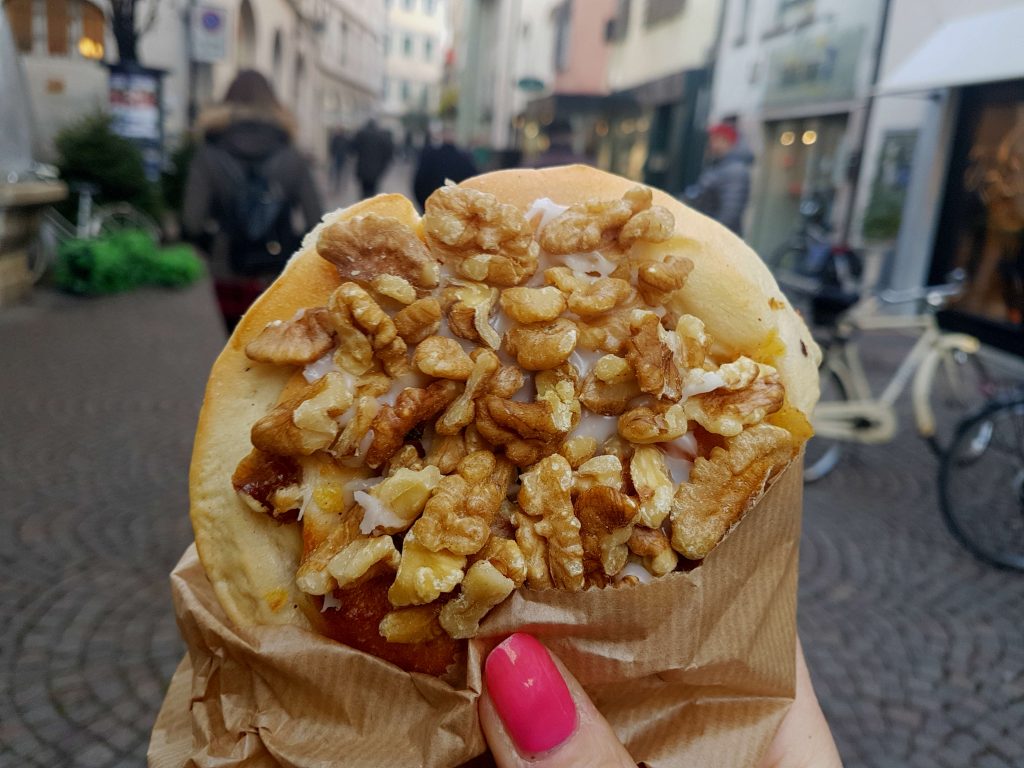 While we’re on a sweet note, the typical Austrian or Viennese speciality of Sachertorte is, to be honest, a firm favourite all over Italy. Yet we found excellent examples of this delicious chocolate cake in local bakeries in Bolzano. Originally invented by Austrian Franz Sacher, it consists of a dense chocolate cake sandwiched with a thin layer of apricot jam, coated in dark chocolate icing on the top and sides.

While it is often served with unsweetened whipped cream in cafes in Vienna, in Bolzano expect to head to a bakery and buy an entire cake to go. Well, if you insist! If chocolate’s not your thing, but you’re still looking for something sweet to eat, typical rolls of apfel (apple) strudel also proliferate here. Studded with raisins and dusted with cinnamon, its a tasty way to end any meal.

Where to eat in Bolzano: Takeaway from Panificio Grandi, via dei Bottai 18, Bolzano 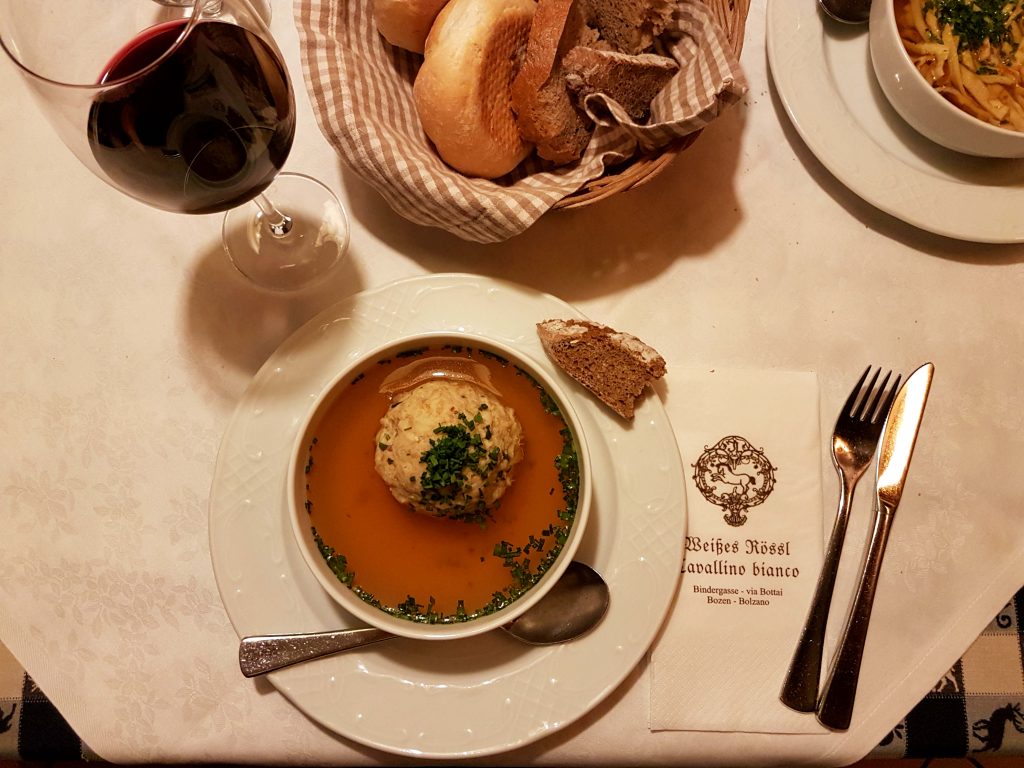 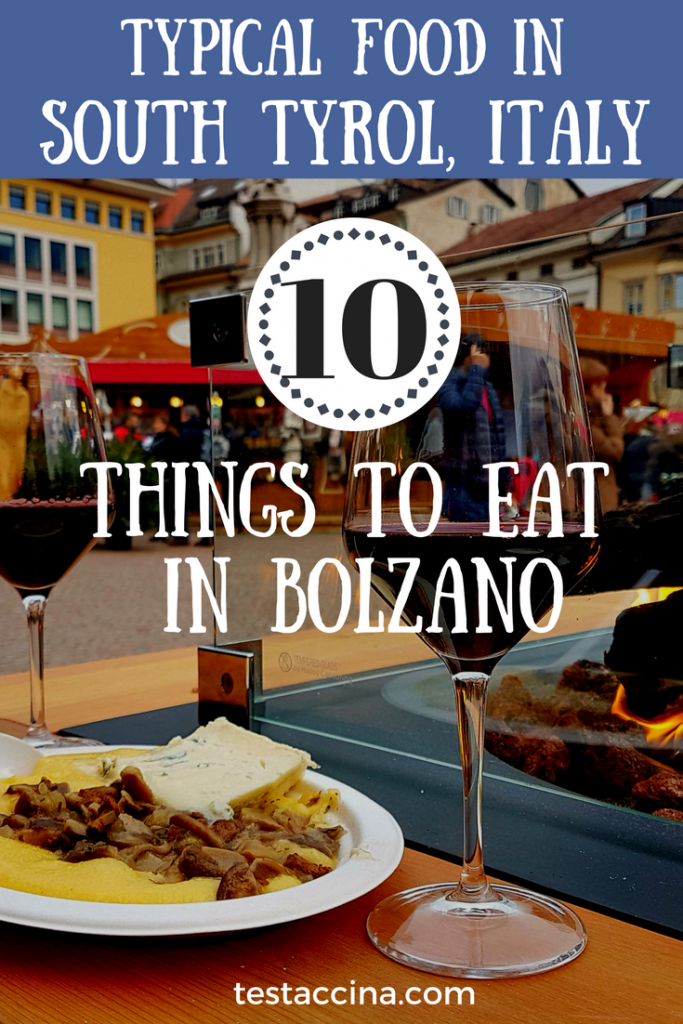 Dumplings, a typical poor food which exists throughout northern Europe, vary slightly in their recipes but usually consist of potatoes, bread or suet, combined with eggs or milk and sometimes ground meat or cheese, to give flavour to the dumpling and add to its energy-giving properties.

One of the most typical foods in South Tyrol, canederli (plural) are dumplings made from stale bread, combined with eggs and milk, and often mixed with cheese or cubes of speck in a classic case of waste-not want-not.

Milk-softened bread, sometimes with a cube of cheese at its heart, is formed into balls and boiled in salted water. They are sometimes served with their cooking broth as a kind of sauce. Of course, today meat isn’t such a luxury so the canederli found in restaurants in Bolzano often features quality ground veal or speck and contain less bread than they used to. Some are combined with polenta flour, and most are flavoured with cheese, too.

My favourite canederli experience this time in Bolzano was actually a canederlo experience (one huge speck dumpling served in broth, pictured above) at Ristorante Cavallino Bianco. On the ski slopes of the Corno del Renon, at the restaurant Schwarzseespitze in Collalbo, I also tried excellent canederli served with beef goulash. Highly recommended.

Where to eat in Bolzano: Weißes Rössl (Cavallino Bianco) Via dei Bottai, 6, Bolzano

Sometimes you just need a meaty snack on the go – I discovered these in Germany years ago, my German friend calls them German bananas, and they’re basically dried sausages made from pork or venison, smoked to perfection, and ideal for a quick, protein rich snack between meals. The Bolano Christmas market is a great place to pick them up, but you can luckily buy them in any butcher or local deli for a couple of euros. Delicious!

Where to eat: Bolzano Christmas market or any butchers / deli 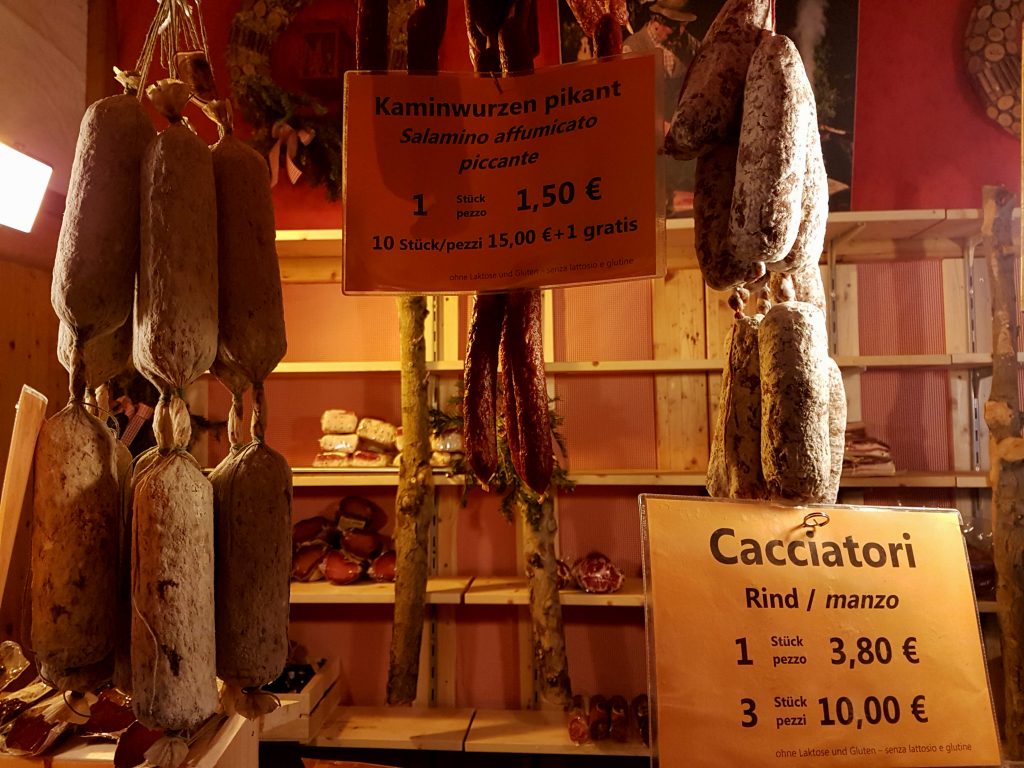 With 300 days of sunshine a year, the famed mountain pastures of South Tyrol support a significant dairy industry, where fresh Alpine air, lush grass and naturally occuring herbs are responsible for high quality milk and local cheeses. You might be surprised to find that good quality mozzarella cheese is made in the nearby mountains, as well as soft spreadable cheeses, combined with herbs, and harder mountain cheeses, typically from cow rather than sheep milk.  The village of Ahrntal, for example, produces a ‘grey’ cheese known as Graukas, a firm curd-like cheese often served with onions, oil and vinegar.

The region’s most famous pork product is speck, not to be confused with typical Italian prosciutto crudo. Rather, it takes some of the prosciutto crudo drying process and adds smoking to the technique, blending Italian and Germanic curing processes to perfection. Locally, they call the secret of a good speck ‘a little salt, a little smoke and a lot of fresh air’, combining light curing with the alternation between smoke and fresh air.

Originally invented by the poorer strata of society to preserve the meat of pigs killed around Christmas time, today speck is one of the jewels in the crown of South Tyrol cuisine and features everywhere from banquets to simple suppers, served with bread and a glass of good wine or beer. Where to eat: Any good deli, or Hopfen & Co., Piazza delle Erbe 17,  Bolzano OPEN SUNDAYS

Perhaps unsurprisingly given its location, Bolzano has a few choice brewpubs reflecting the historical traditions of brewing beer, in chiefly Germanic styles. Batzen Bräu (pictured) is a simply enchanting old-style pub, dressed with gorgeous lights in the winter, with the copper panels of the brewery visible in an adjacent, more modern building.

The pub serves burgers and similar well-priced bites for an easy supper with a pint of craft ale. Otherwise, for an even more traditional vibe, head to Hopfen & Co. for a cellar-bar vibe and traditional food on red and white checkered tablecloths (pictured above). 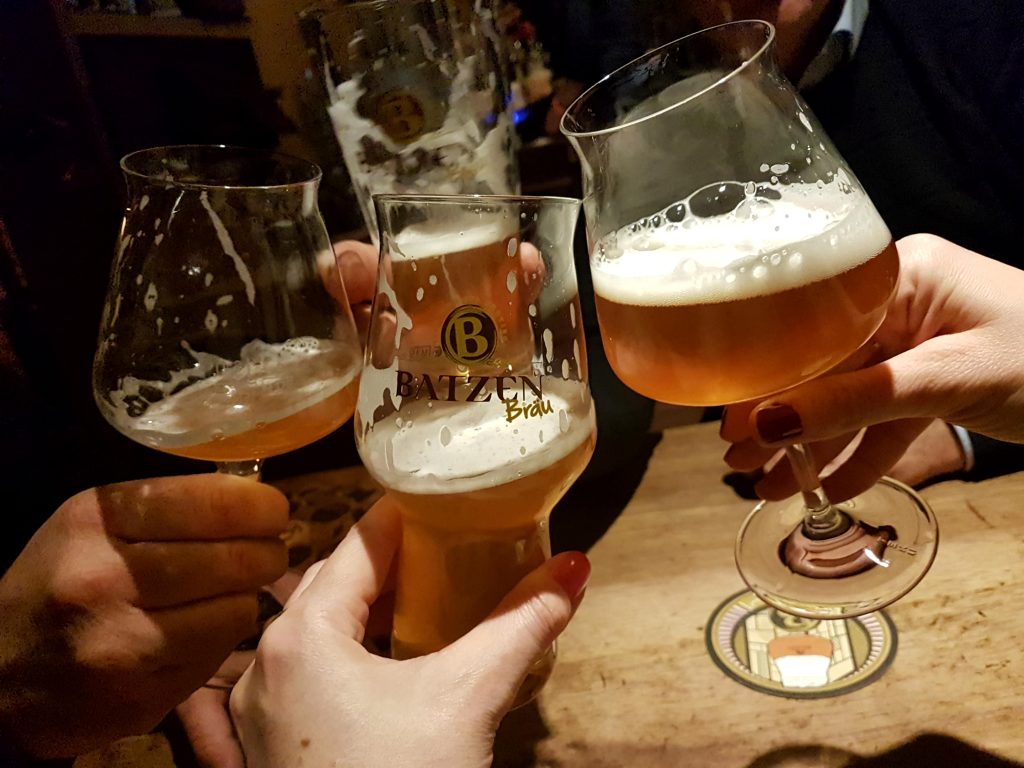 If wine is more your thing, never fear as Bolzano and the South Tyrol region is home to a few local gems. As you might expect, the white wines in this region reflect its geography: expect intensely floral grapes such as Moscato Giallo and Gewürztraminer, as well as German classics including Riesling, Müller Thurgau and Silvaner, as well as good variants on Pinot Bianco and Pinot Grigio.

If, like me, you’re partial to a red, the king of South Tyrol reds is Lagrein, a red wine grape native to the region and a descendant of Teroldego, and related to Syrah, Pinot Noir and Dureza. These dark and full-bodied but not heavy wines, low in acidity, will keep you busy for the duration of your holiday.

Look out too for the urban vineyard of Santa Maddalena, in Bolzano city, producing a local denomination combining Schiava and Lagrein grapes grown on the Santa Maddalena hill north of the city. One of Bolzano’s oldest restaurants, Löwengrube, has an excellent cellar and is a great place to pause and try some local wines.

Where to drink in Bolzano: Bolzano Christmas market and everywhere, including Weißes Rössl (Cavallino Bianco) Via dei Bottai, 6, Bolzano and Löwengrube, Zollstange 3, Bolzano

Read next: Typical Sicilian food: 8 things to eat in Catania