Where to stay in Bologna: L’8Boutique Design Apartments, cosy, chic and central

If you’re trying to decide where to stay in Bologna, I’m delighted to be able to share a great Bologna hotel tip – L’8Boutique Design Apartments, right in the historical centre of Bologna.

Located in via Via Agamennone Zappoli, at number 2, this complex of eight, well-appointed apartments is situated in a single three-storey building with a common entrance, while an attractive, shabby-chic waiting room and check-in desk is located at ground floor level next door.

Additional cots are available if you’re in search of a family option for your stay in Bologna, while the superb decor and private nature of the apartments makes L’8Boutique Design Apartments also a fantastic option for a romantic break in Bologna.

Where to stay in Bologna: the best location

The fabulous location of L’8Boutique Design Apartments is about a ten minute walk from Bologna train station, and directly in an atmospheric side-street characterised by its proximity to the city’s fabulous underground canal network – some of which bubble along nearby beneath narrow bridges, giving the area an almost Venetian feel.

It’s also close by a lively row of restaurants and bars, including a few excellent-value options populated by students. Buzzing shopping street via dell’Indipendenza is just five minutes away, which leads directly to Bologna’s central square, Piazza Maggiore. 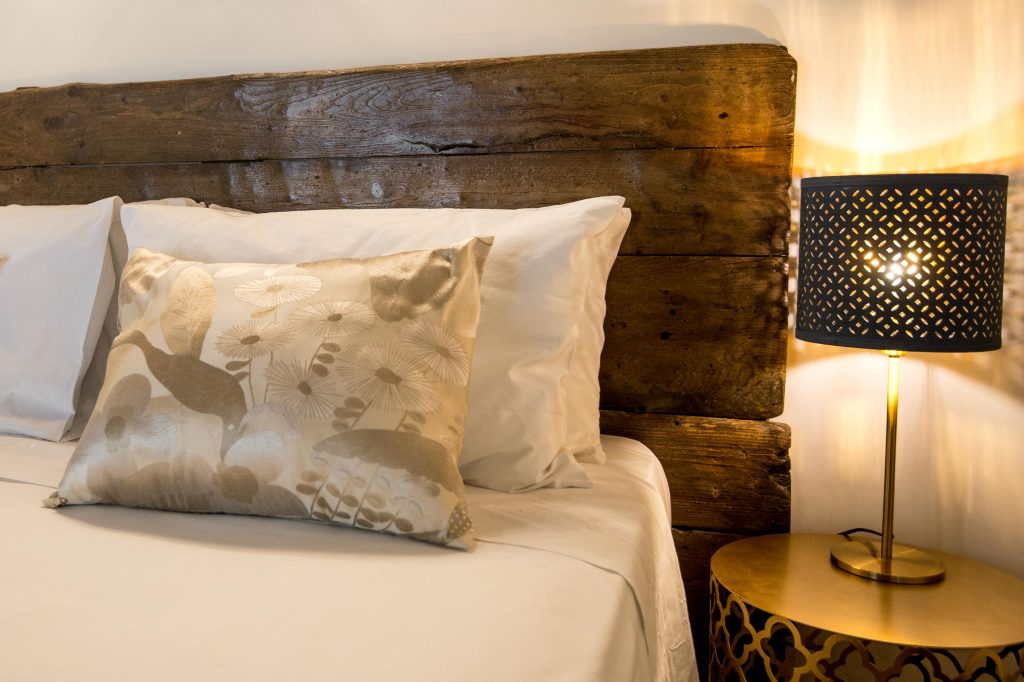 The brain-child of two sisters, Federica and Francesca, L’8Boutique Design Apartments arose from a desire to transform their grandmother’s house into eight deluxe holiday apartments, each with a kitchen and living area, bedroom and private bathroom. 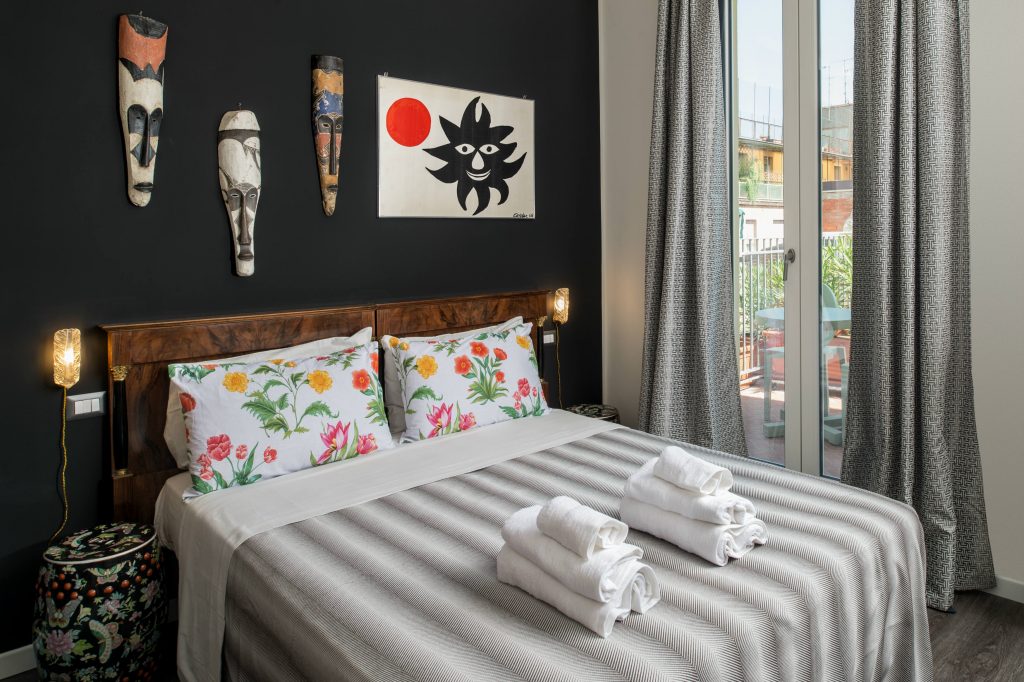 The result is an apartment stay which is brimming with charm and vintage detailing, but reassuringly refurbished into a modern environment with air conditioned rooms, first rate mattresses, power showers, dishwashers and smart TVs. 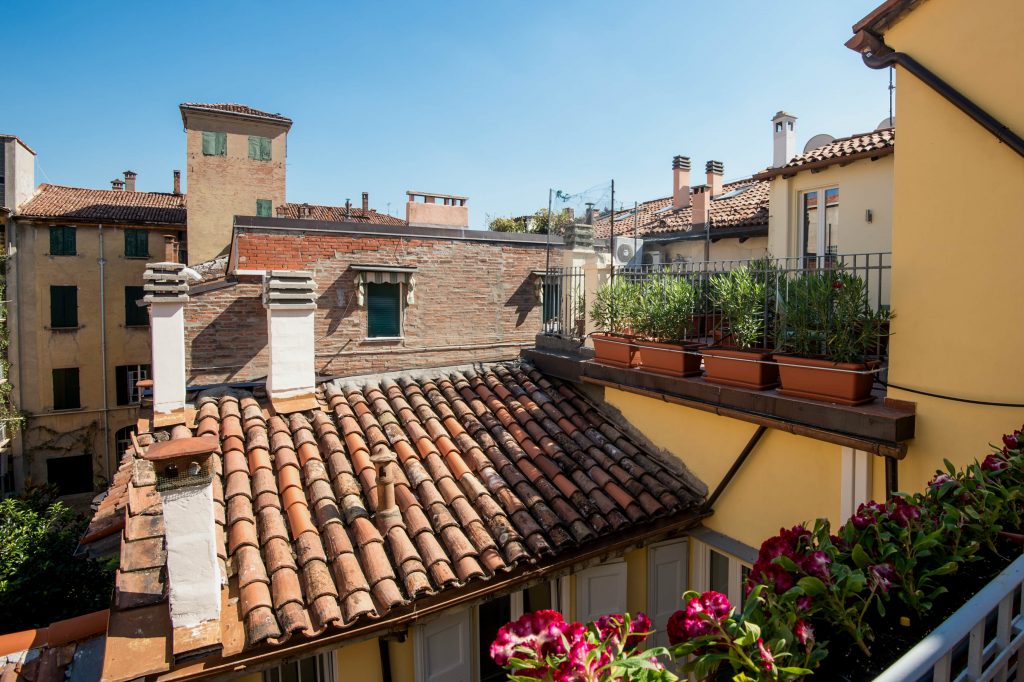 Where to stay in Bologna: L’8Boutique Design Apartments

I stayed in room 803 on the top floor, a cosy yet airy space where the ceiling has been literally stripped back to reveal the wooden beams of the roof, creating a warm, natural vibe above the clean white walls of the bedroom. The silent location above the red rooftops of Bologna, plus a sensational mattress, made for an excellent night’s sleep. 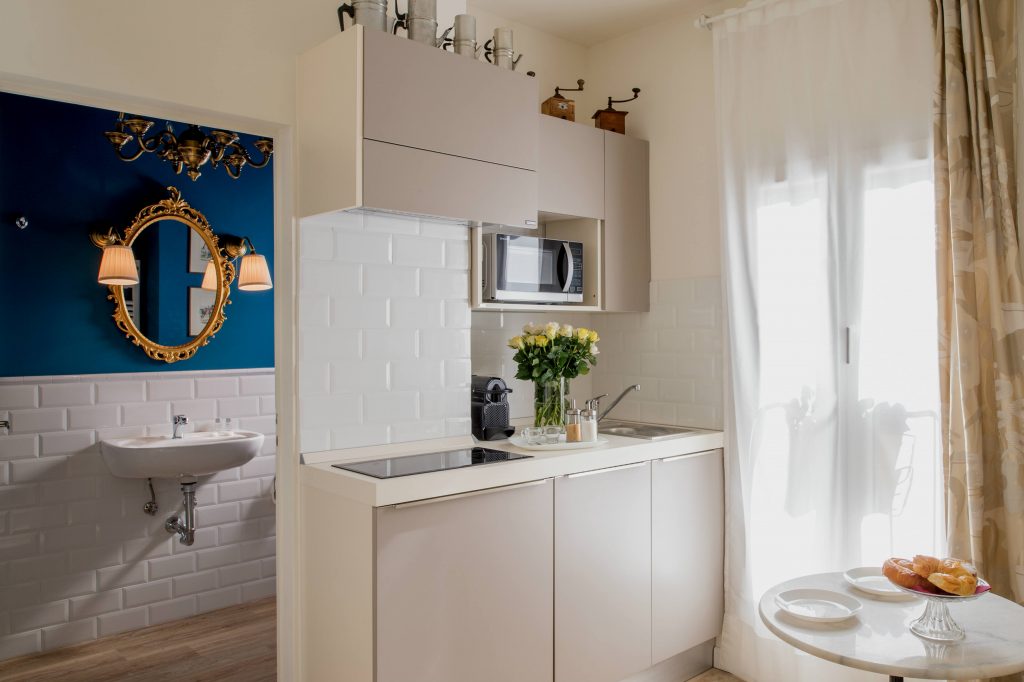 Although there is no lift in the building, the presence of ground floor rooms means that this is also an excellent choice for the less well-abled. 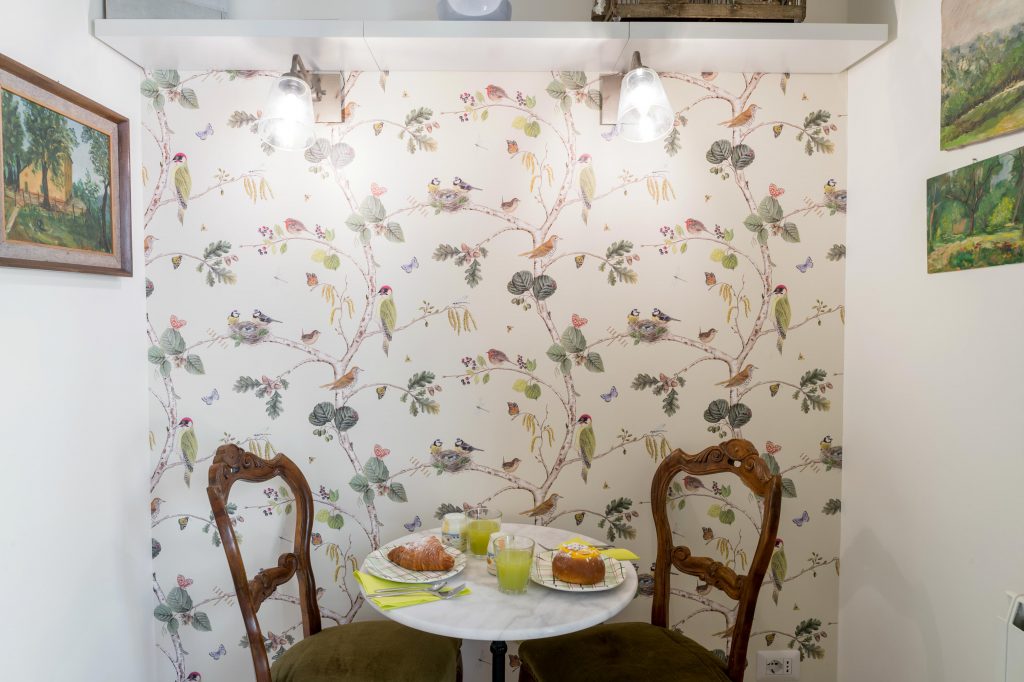 Each apartment has a fully equipped kitchen or kitchenette, including fridge, hot plates and dishwasher, plus a range of saucepans and a kettle. 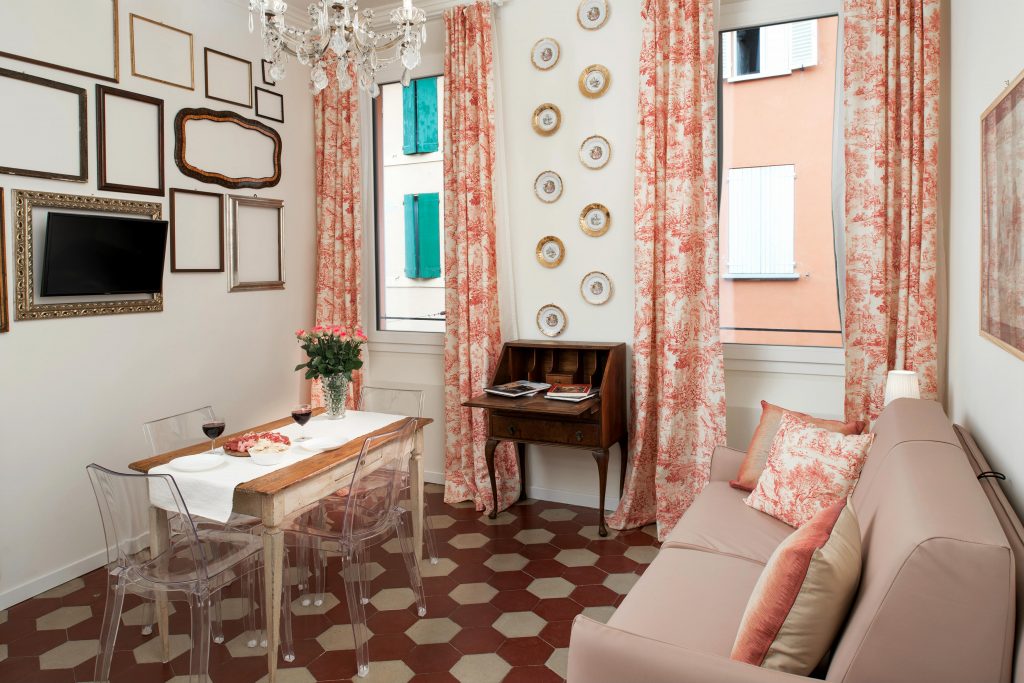 This means that you have the option and the ability to cook at home or prepare light snacks, although the nearby presence of the buzzing via Augusto Righi – plus the charms of Bolgona – will almost certainly mean that you are tempted out for dinner. 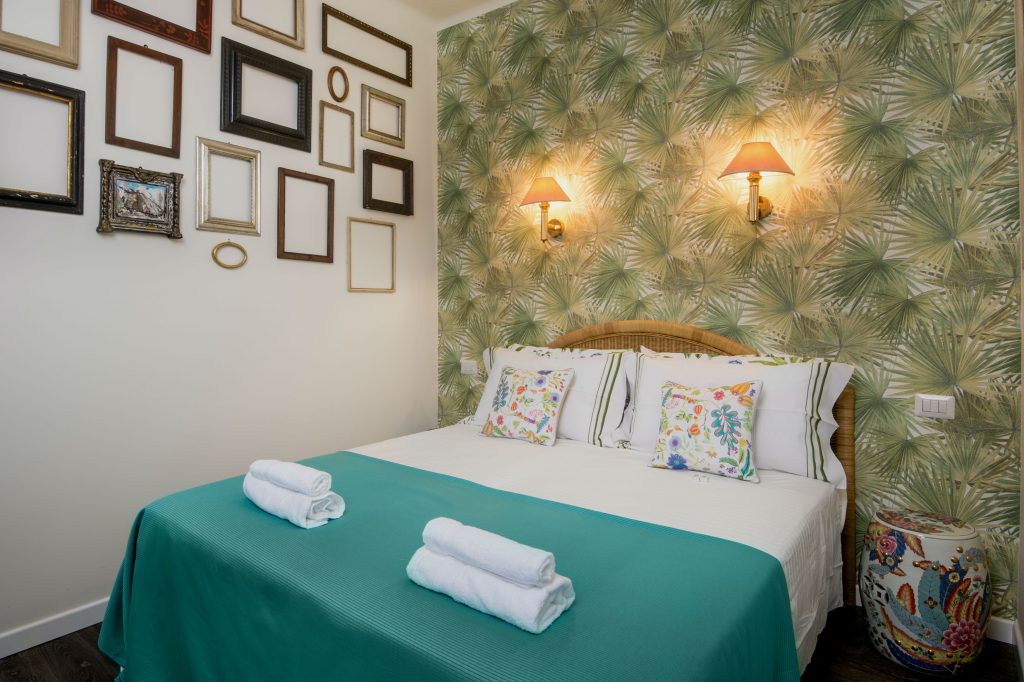 Where to stay in Bologna: exploring the city

The girls leave an ideal itinerary for exploring Bologna in the hotel rooms, which is easy to follow and a fun start if you’re new to the city. They also suggest a full list of restaurants and bars, for breakfast, lunch and dinner – bearing in mind that there is currently no breakfast available in the hotel. 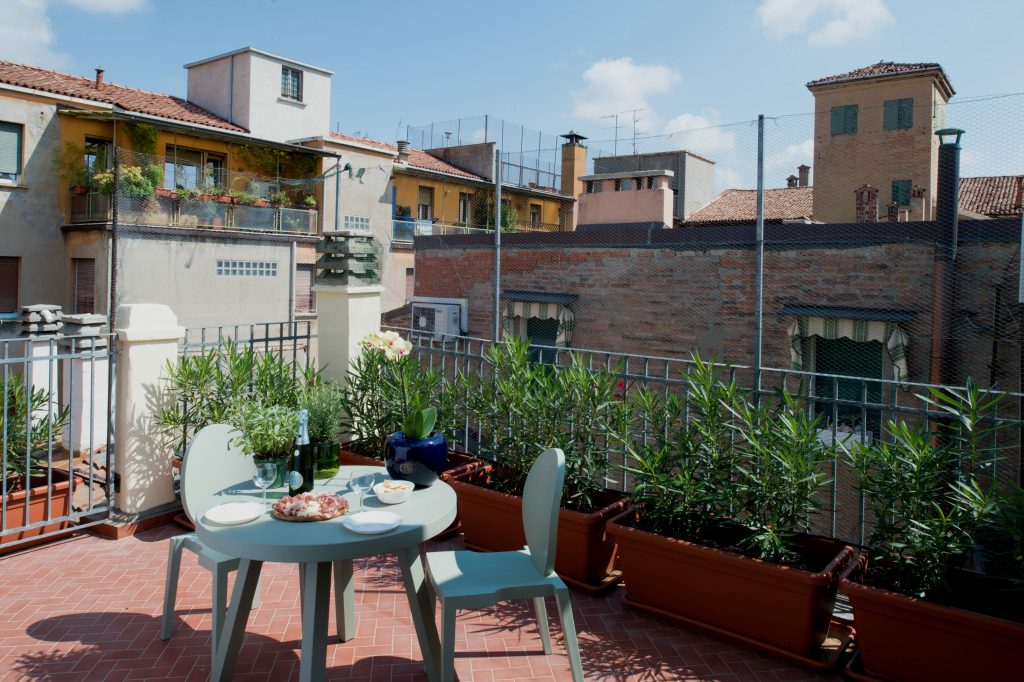 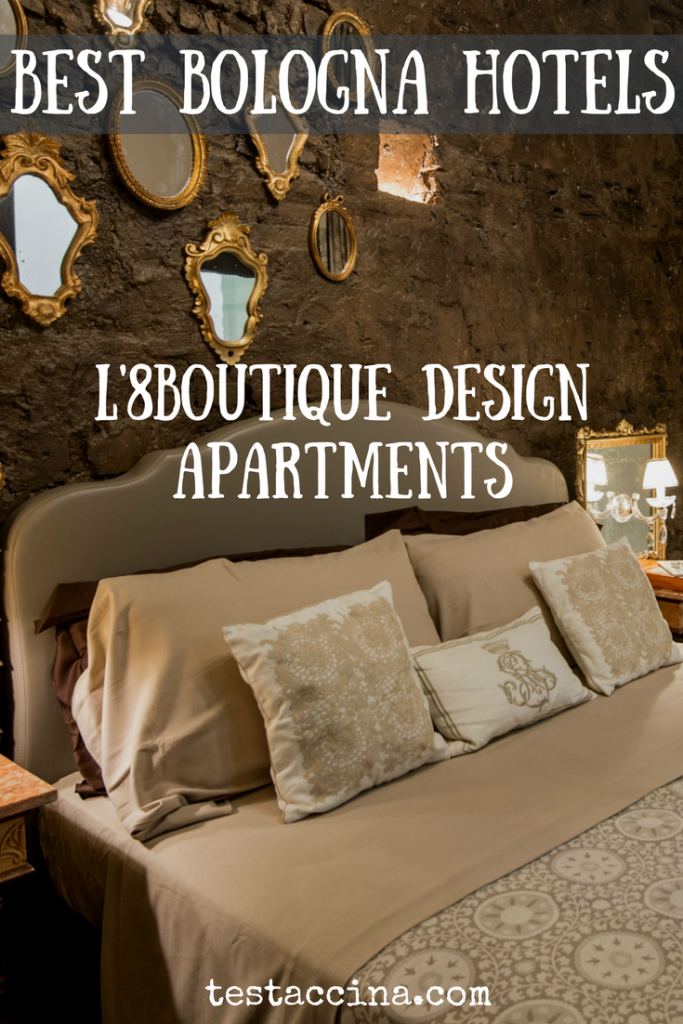 After launching in the autumn of 2017, L’8Boutique Design Apartments is already making a name for itself, so don’t delay – reserve your stay directly with the structure here.

If you’d like to see further reviews you can also check the link here to Booking.com, where L’8Boutique has already notched up an exceptional score of 9.7. All in all, highly recommended and a perfect home from home for exploring the city of Bologna.

Read next: 10 things to eat in Bolzano