Why Are Italians so Great at Design? Italianism, May 14 in Rome, Might Have the Answer

Why are Italians so great at design? There’s a strong argument, at least in recent times, that living and breathing the rich heritage of Italy’s cultural past has nurtured an appreciation and instinct for the beautiful. But what about generations past, the great builders of the Medieval period, the first artists to forge the revolution that became the Renaissance? For Italian furniture designer Franz Riviora, both the country’s historical poverty and a willingness to patronise the arts have something to do with it.

“Italy has always been a very poor country. When I say poor, I mean poor by natural resources,” Riviora suggests. “There was very little of everything, since ages past. No iron, no silver, no gold – something that other countries had in abundance. Having so few resources, they had to invent ways to make up for what lacked, and so this propelled the innovative spirit of ‘making do’ – arrangiarsi – which helped them achieve mastery in engineering, crafts and sciences, in medieval times and afterwards, during the Renaissance.”

He adds: “Italians are exposed to a plethora of acts of beauty throughout their lives. I mean, they literally breathe culture and art. The majority of Italian city cores are old – very old – dating back from Renaissance or Medieval times – or even older, like Rome. This continuous exposure to art has its effects: Italians have lived in the presence of design and beauty more than other populations, so are probably more attuned to it, and express it in a more natural and personal way.”

This Saturday, in Rome, the event Italianism will attempt to get even closer to the question by showcasing the work of some of the best young street artists, textile designers, cartoonists and graphic artists, video makers and illustrators around today, as well as specialists from the world of Art Direction, Communication, Design, Digital, Photography, Multimedia, Print, Tattoo, Typography, Video in a one-day conference and fair.

Conceived and directed by Renato Fontana and produced by Nufactory, the project takes place in the context of Outdoor Extra, an initiative to regenerate disused spaces through the application of cultural events.

United by the theme “The Crossing”, this second ever edition of Italianism will bring home-grown talents together – resident both in Italy and abroad – for Q&A sessions and an exhibition of works, with concerts and DJ sets enlivening the event. The two principal exhibitions will comprise a collection of photos from Maurizio Iorio, entitled Objects and Human Beings, which focuses on the relationship between objects and humans, in a very personal approach to the theme of “still life” (right). The other, Arche’tipo, presents Federico Babina’s art posters: a mix of architecture, graphic design, illustration and infographics, completely original and unpublished. The exhibition is composed of 33 individual works, from the Archimusic, Archidirector and Archist series, illustrating the great masters of cinema, music and art as if they were buildings. 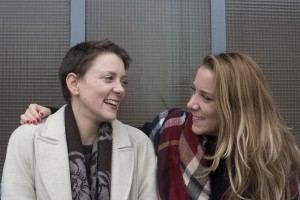 Tessa and Arianna of Lottozero

Portfolio Review is the section dedicated to students and emerging talents, who will have the unique opportunity to come into direct contact with leading professionals, presenting their projects to big names in the fields of illustration, graphic design, photography and Art Direction.

Even if Italianism can’t truly explain why Italy is such a creative crucible, its transformation of the country’s name into a noun – an art movement – underlines the indelible association between design and the Bel Paese. To a generation which is once again being called upon to arrangiarsi – to make do – in a context of economic want, this is precious inspiration indeed.

Spring 2016 – The Crossing Edition: Contemporary Visual Culture Made by Italians

Read Next: How to See The Rose Petal Shower in The Pantheon, Rome, at Pentecost