Roman markets: Exploring autumn’s fruits at the market on via Porto Fluviale, Rome

Once a week, for long as I can remember, I stroll the full length of via Nicola Zabaglia, past the graffitied shutters of the ancient Roman rubbish dump, and pass under the arches of the Aurelian walls that mark the end of Testaccio to one of the Roman markets least visited by tourists.

Beyond the Campo Boario roundabout, the walls are richly daubed with street art, before, under and after the iron bolts of the railway bridge: look out for artist Blu’s anguished faces animating the former barracks on the corner of the road.

It’s usually a Saturday or Sunday morning, but sometimes it’s a Friday afternoon, or a Tuesday lunchtime. My shoulders are light with empty bags as I walk to the unnamed Roman market at 61-64 Via Porto Fluviale. 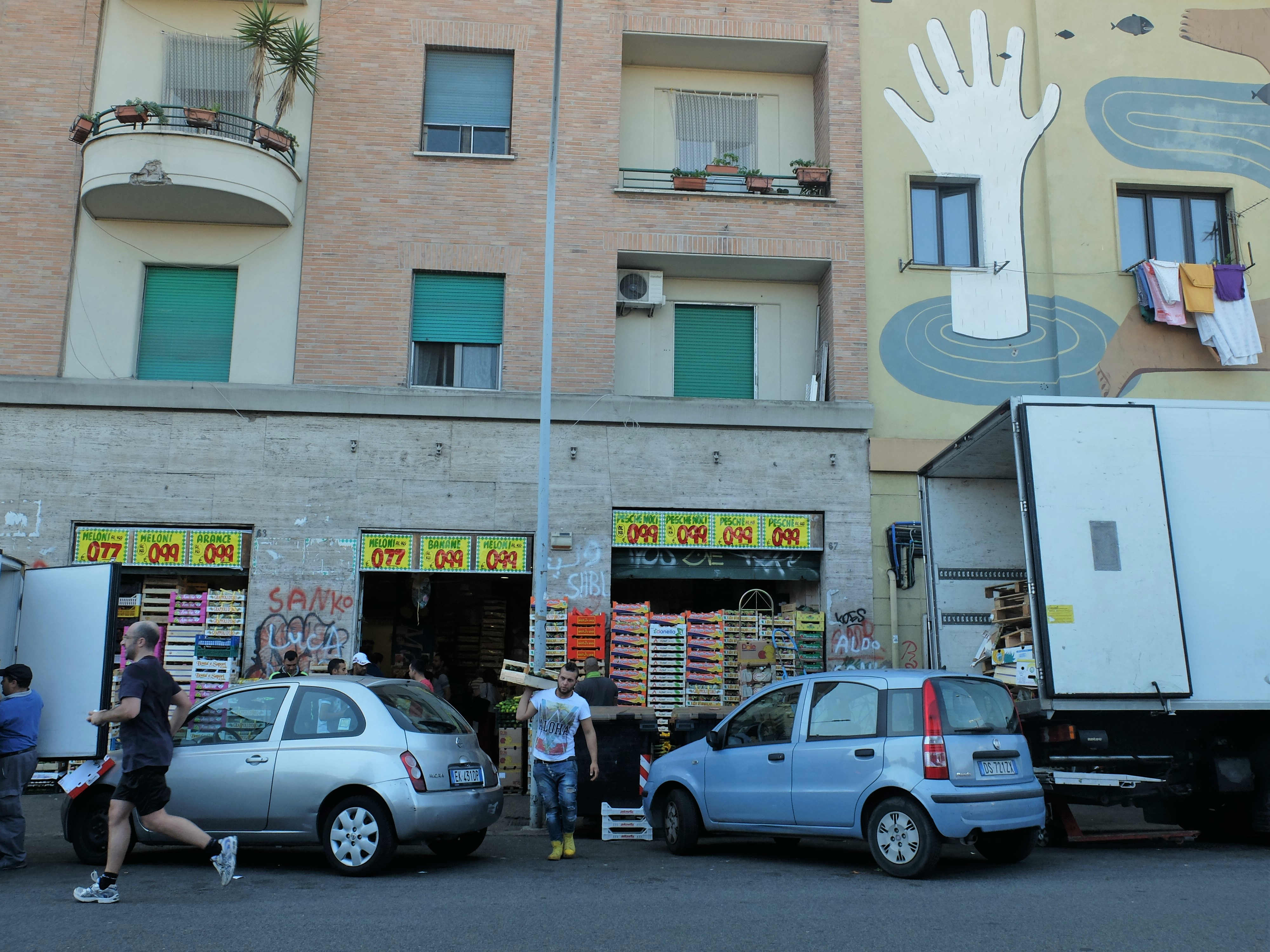 It’s nearly twice as far as Testaccio market from my house, but this is my market – a grubby, pile-it-high temple of fresh produce where I feel at ease touching and smelling, squeezing and stealing a taste. It opened in 2003, the year that I arrived in Rome, and is run by a collective of young entrepreneurs from Egypt. Sometimes, there are ten of them there: quick-witted in Roman dialect, standing on each other’s shoulders like acrobats to stack newly arrived crates of vegetables in impossible towers. On other occasions, there’s four or five of them running the show – concentrating at the cash tills, or slouching at ease against mountains of apples. 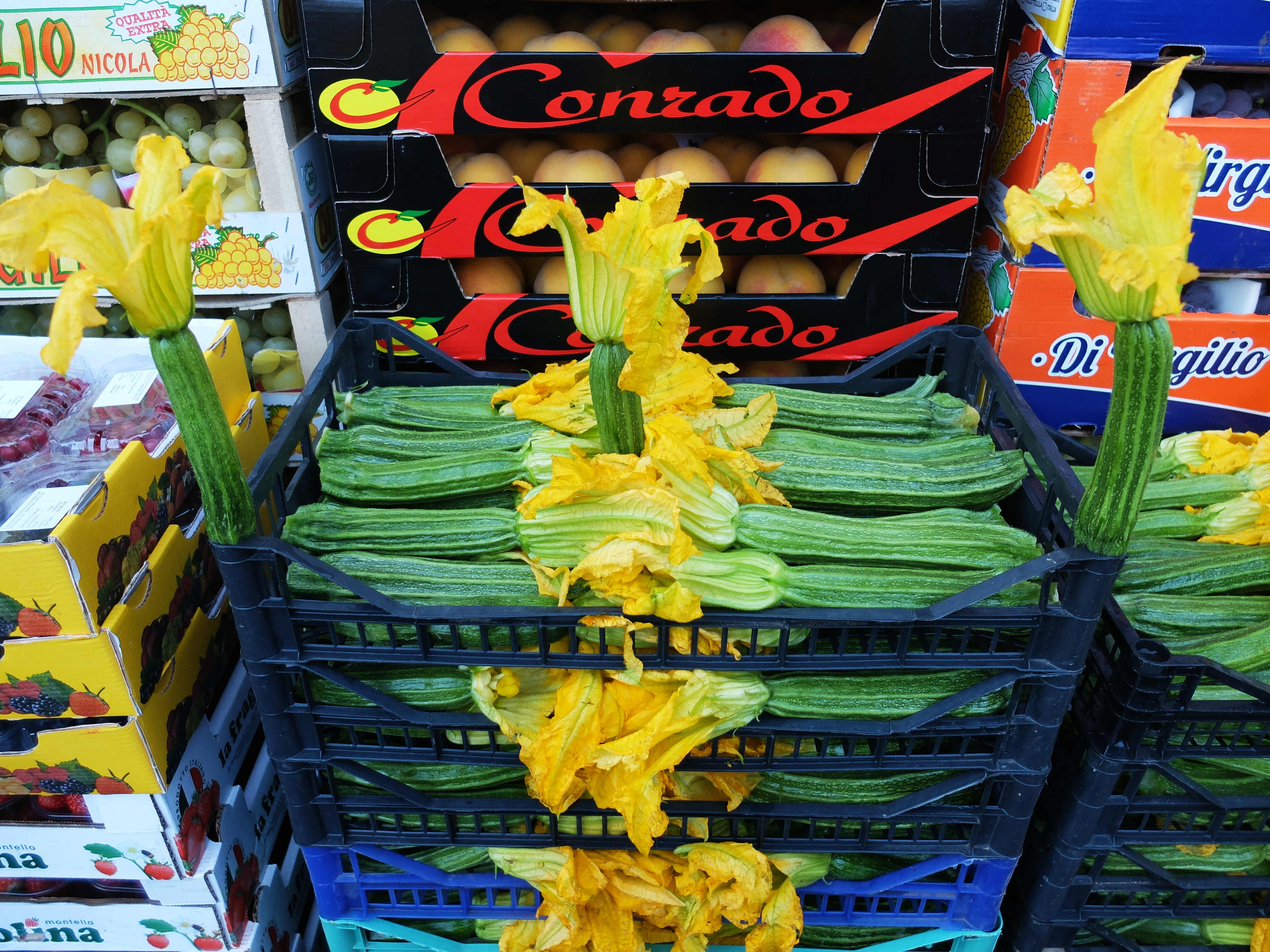 At a glance, it’s a colourful children’s book guide to the seasons: dark with leafy green vegetables in the winter and the muted colours of apples, juxtaposed with the fluorescent mounds of oranges and clementines. The summer is perhaps my favourite, erupting with scarlet tomatoes, the spreading blush of peaches and nectarines, leaf-green figs, hexagonal ‘pixel’ courgettes, and melons like bowling balls at the end of an aisle. 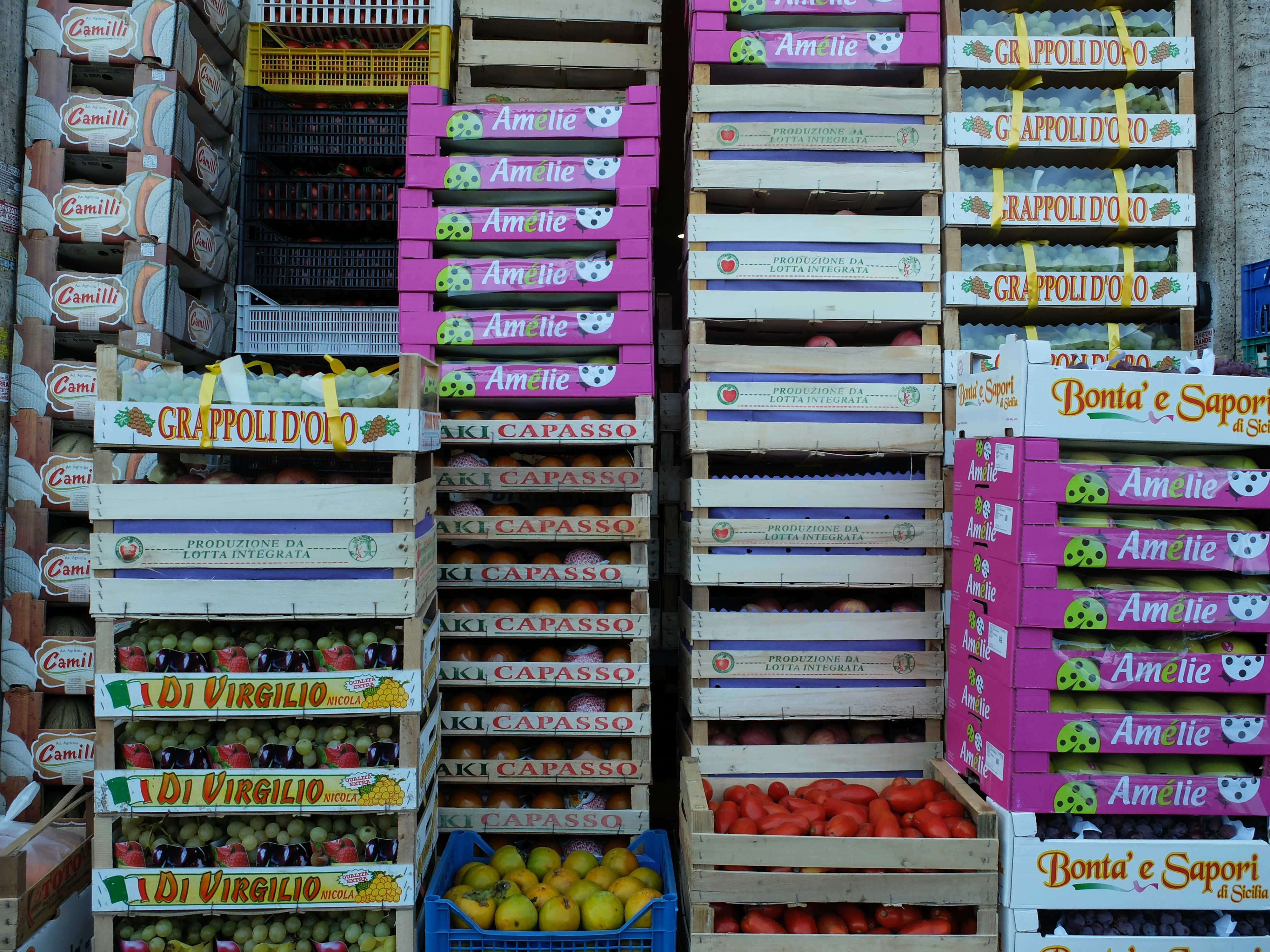 But now, in the autumn, this particular Roman market assumes a particular kind of rich dignity, as the slowest summer fruits and vegetables finally come into their own. Now, you’ll find the last of the plums and greengages like golf balls; four or five kinds of aubergine: black globe, thin-skinned variegated Graffiti eggplants, the white Tango variety which is better peeled, and heirloom Bianca aubergines, like violet grapefruit. Seven types of grapes sprawl across the bays of fruit, including pizzutello grapes from the hills above Tivoli, little succulent missiles, or the uva fragola, a table grape cousin of the wine grape which is now limited to personal production, with its exotic rose water taste. 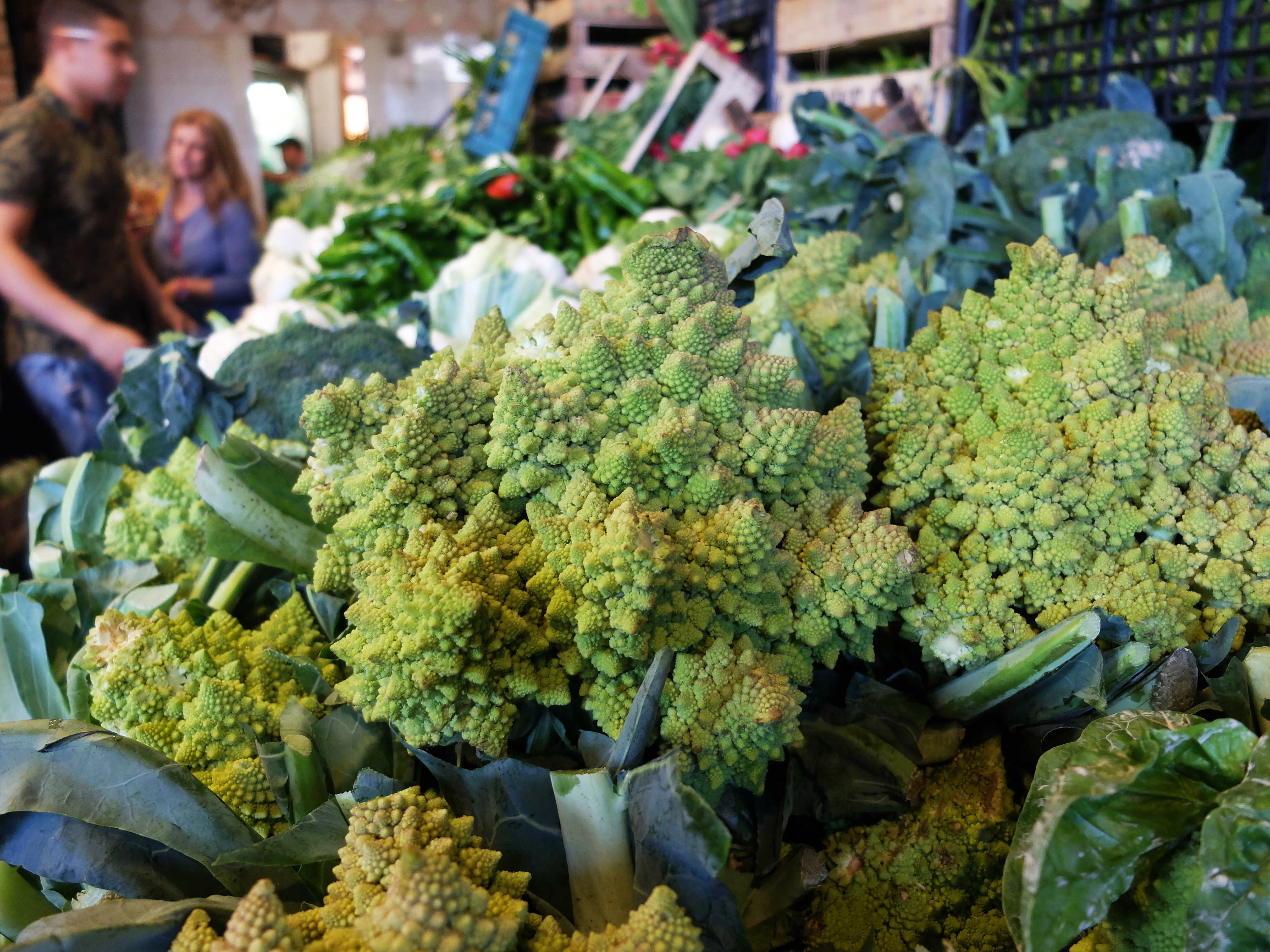 By the cash tills, mushrooms are casually piled like gold nuggets: you’ll probably recognise the princely porcini variety, bronzed and grubby, but look out too for what are colloquially known as ovuli, (eggs), resembling coral fruit in gnarled cones; they’re wonderful sliced raw with shavings of Parmesan and a drizzle of oil. 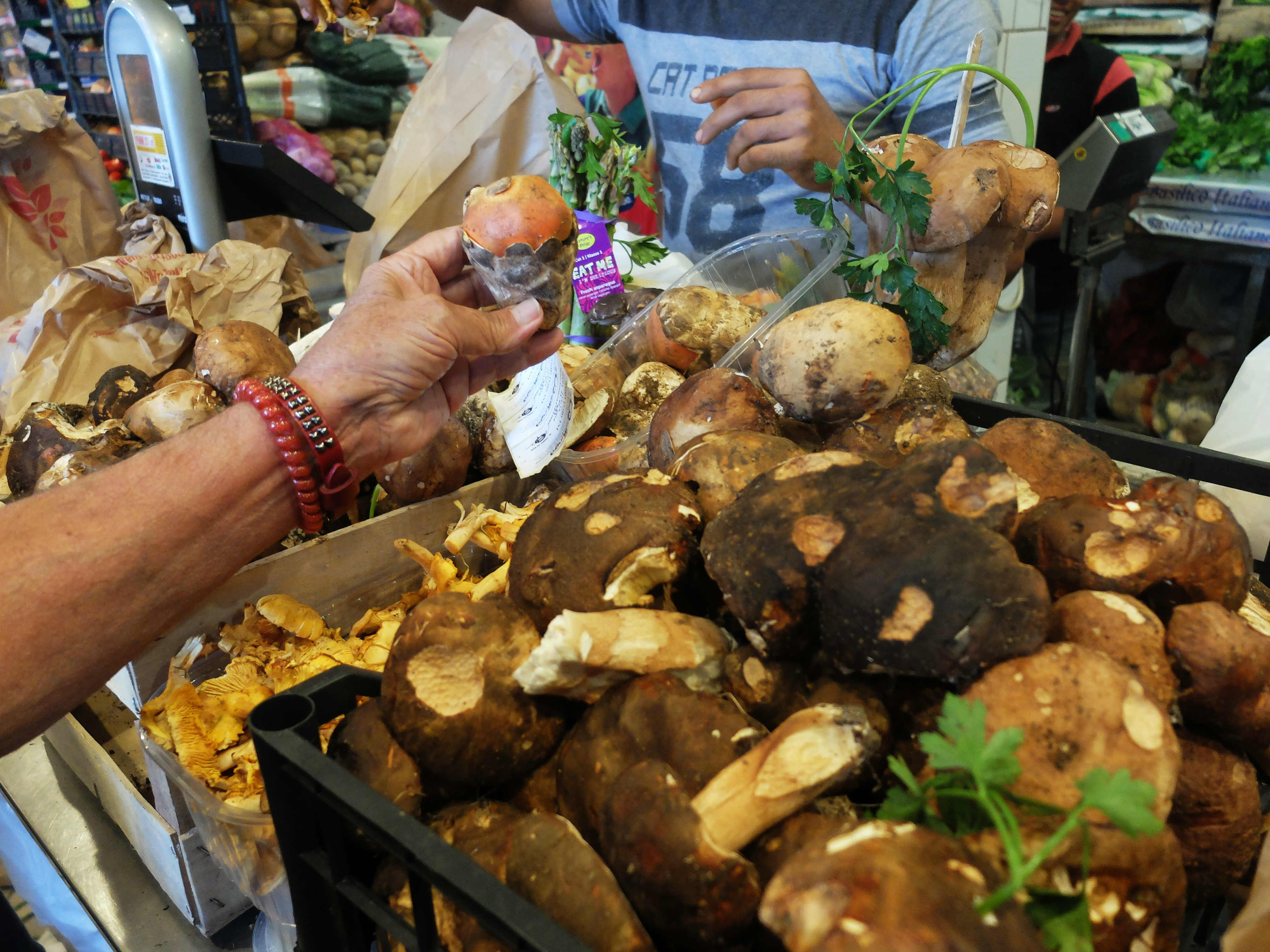 This is a market where you’re left to your own devices to dig deep, compiling paper bags of ingredients and snacks and future adventures in cooking. Look out too for the white-shelled eggs, rich in flavour with apricot-coloured yolks – but bring your own corrugated boxes to take them away.

There’s always banter at the cash registers, a wink, a flirt, as handfuls of fresh herbs, carrots and celery are stuffed into your bag – the odori that naturally create a sautéed base for so much Italian cooking.

Then I wave, grin over my shoulder, and stroll back home with the latest Egyptian pop songs in my head, hunger stirring, and dark juices under my fingernails.

Read next: How to drive a scooter in Italy: 50 tips and tricks for driving a Vespa in Rome