Ballad Caffè in Rome, a jazz club which opened around 12 months ago in San Lorenzo, has had a sensational year.

In a city with some great live music venues, it has established itself as a first class place for jazz and classical performances in an intimate location at the right price.

While music is scheduled Thursday to Sunday – including a fabulous musical brunch and afternoon tea with a live recital – Ballad remains a cosy bar and restaurant choice on Tuesdays and Wednesdays as well, the ‘non’ music nights, when you can drop in for ‘just’ drinks and dinner.

According to owner Nunzia Fiorini, Ballad Caffè in Rome has in fact has stepped up its original ambitions to create a sublime new music venue in Rome, by also adding great food to the mix. How often have you been to watch a band and been deeply disappointed by the cuisine? Ballad Caffè in Rome is setting out to change all that.

Interestingly, Nunzia is also the owner of TramJazz, a fun vintage tram tour round the city featuring live musicians on board, which leaves from directly outside Ballad Caffè.

The club has hired sensational new chef Andrea Zerilli to remix the menu, and early signs are extremely promising. Born in 1980, but with 20 years of experience under his belt, Andrea started out at vegetarians’ favourite Il Margutta Vegetarian food&art before working at Tad Concept Store in the capital. A spell under the influence of top chef Anthony Genovese was the springboard to Grand Hotel de la Minerve, before he left the city for experiences in Florence, Siena and Mauritius.

His dazzling menu for Ballad Caffè, changing daily, demonstrates his passion for fresh produce, with seasonal vegetables at its heart.

Dining on a Tuesday night, without live music, the club is transformed into a chilled and cosy restaurant. We started with two kinds of soup, a spicy beef broth and another with five cereals and cannellini beans with a sliver of blue cheese on top (€14) – warming and delicious. 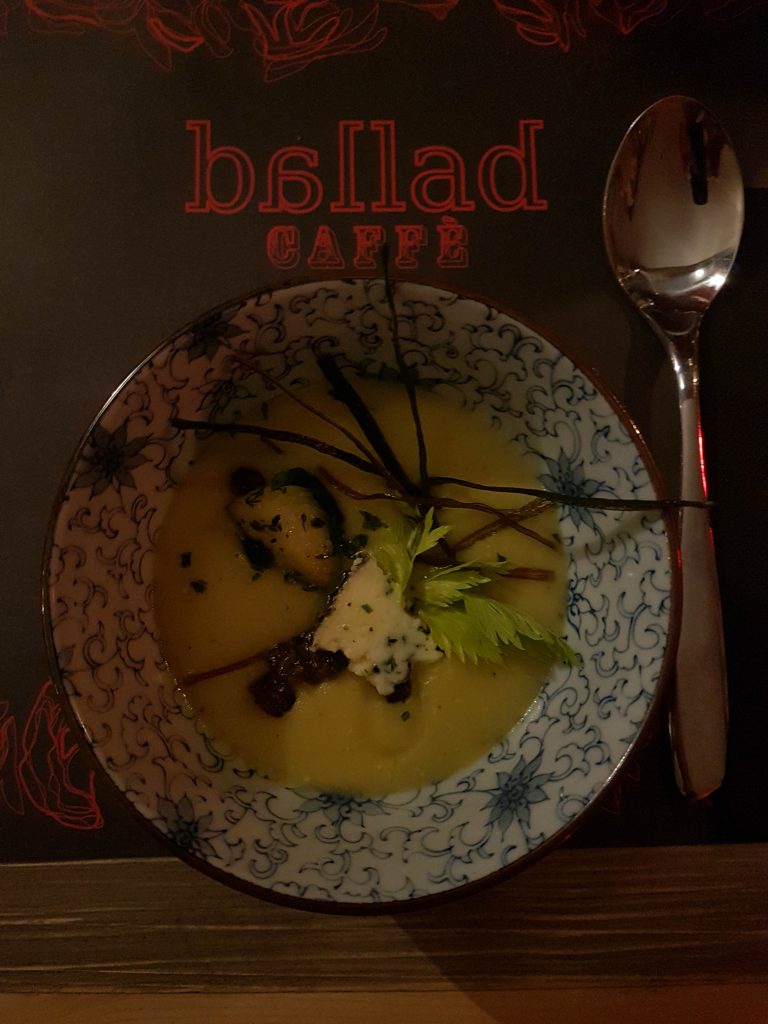 The first courses are richly textured with seasonal vegetables, including this sensational pacchero pasta with Romanesco broccoli, pork cheek and ‘cacio e pepe’, pecorino cheese with black pepper (€14). It is tangy and satisfying with crunchy depth. 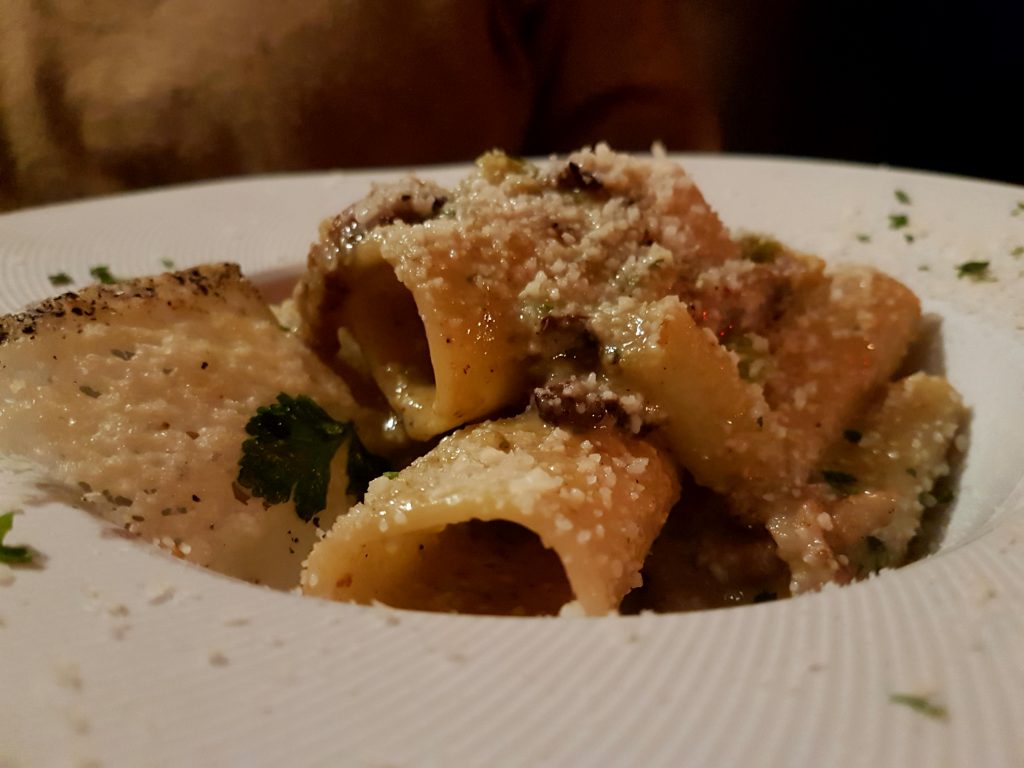 To follow, I order a tagliata a trois (€18), a tris of sliced meats including a succulent rack of lamb and thinly sliced fillet. The meat is cooked to perfection and garnished with flair to continue the richly flavoured theme. 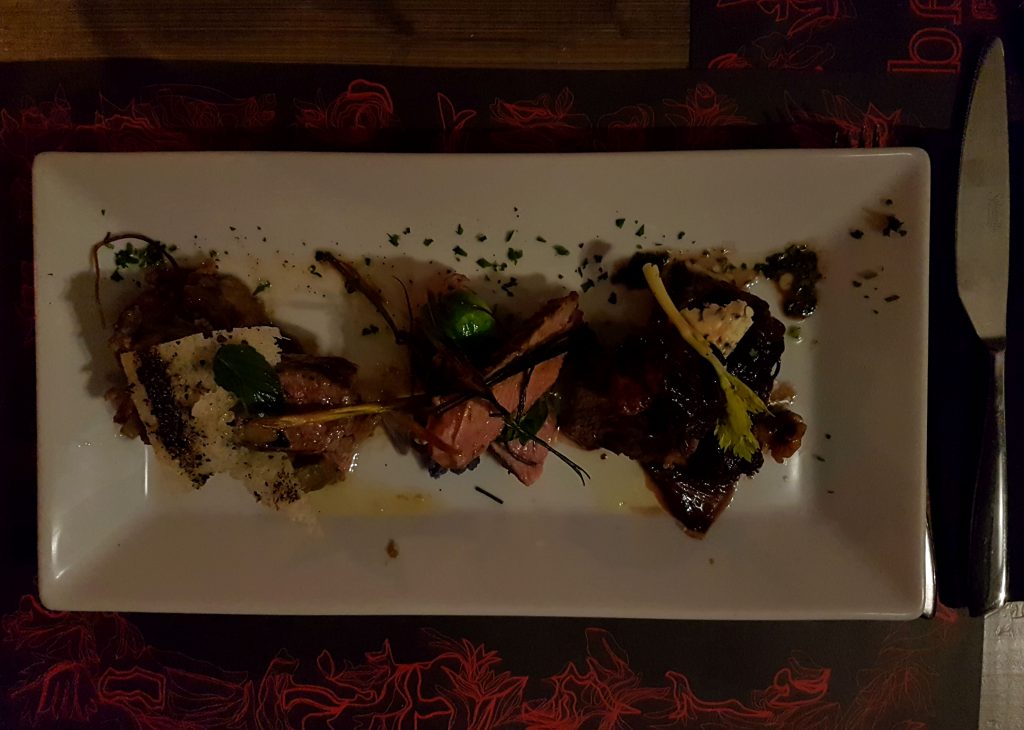 Other options include Pollo Ballad, an incredibly moist and succulent chicken dish made from the heart of a roast bird (€18).

Andrea has a tantalising dessert list, inspired by present and past. I tried and really enjoyed the deceptively simply named bread and wine with sugar. This dish, straight out of grandma’s recipe book, takes stale bread steeped in wine and coated with sugar and fries it in butter. It’s an incredible dish and worth popping in for alone (€10), perhaps matched with a glass of dessert wine if you’re catching a show. 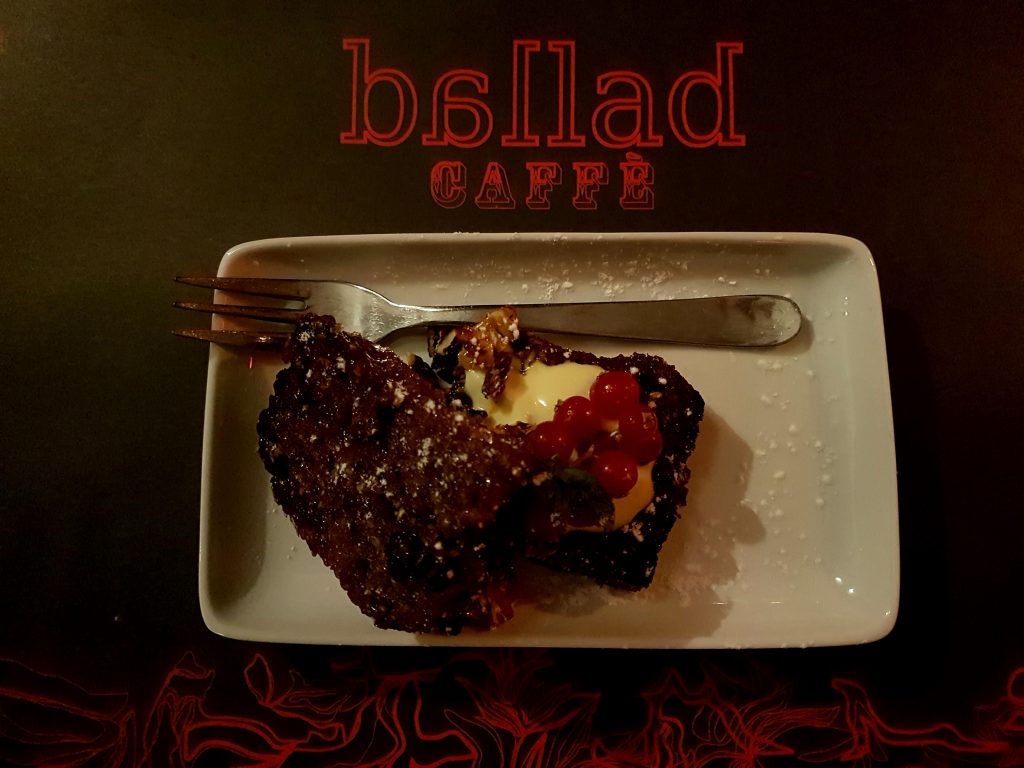 Otherwise, simply drop in for a cocktail or two at the gorgeous, atmospheric bar. Aperitivo plates are available if you’re passing by early evening and just want to check the place out.

Diners in the restaurant pay an additional €5 music fee if they want to stay and enjoy the music, which starts at 22.30 each night, Thursdays to Saturdays.  Otherwise, if you prefer just to arrive in time for the music, the entry price is €15. The set-up on a Sunday is a little different – which I’ll talk about below. 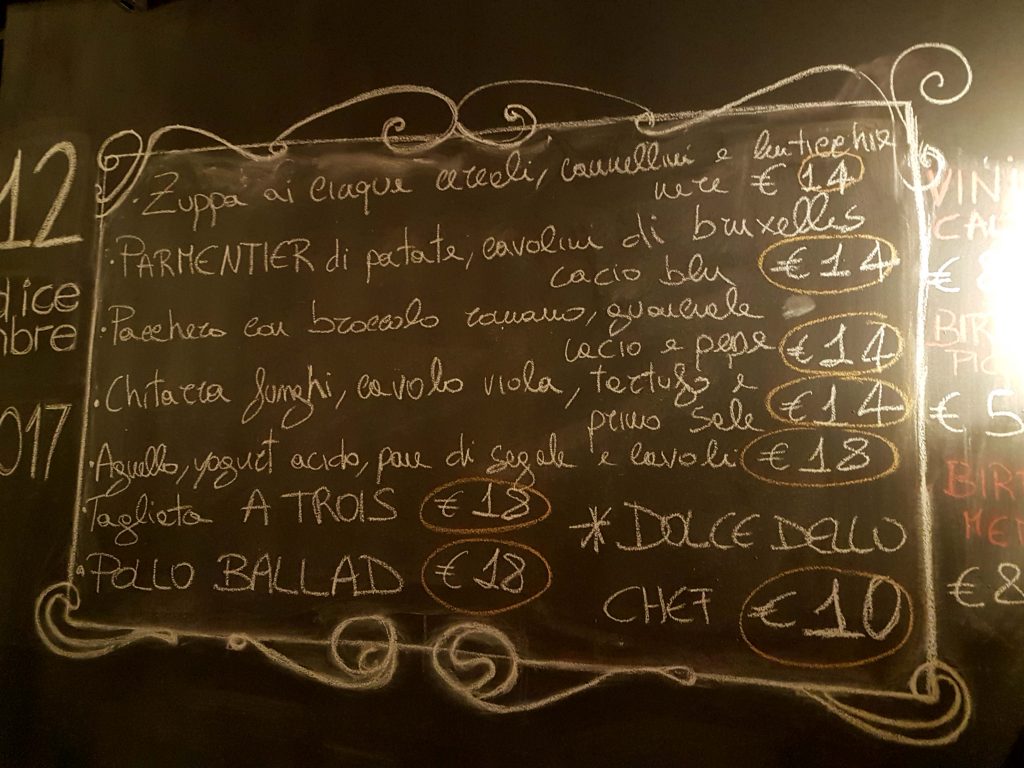 Make it a Sunday date at Ballad Caffè in Rome

If I haven’t given you reason enough to drop in to Ballad Caffè on any given evening, you might want to check out the special events on Sundays. One of Ballad Caffè’s best kept secrets in fact is its extraordinarily good value Sunday brunch which, at €15 for adults and €10 for kids, accompanied by live music, is an absolute steal. The ample buffet opens at 12.00 and remains fully stocked until 16.00.

After that, from 17.00, afternoon tea on a Sunday is accompanied by a classical recital and is the perfect place to spend a wet weekend. Expect handmade cakes and biscuits and a selection of fine world teas, all for a fixed price of €15 per head. Haven’t I just solved boring winter Sundays for you? 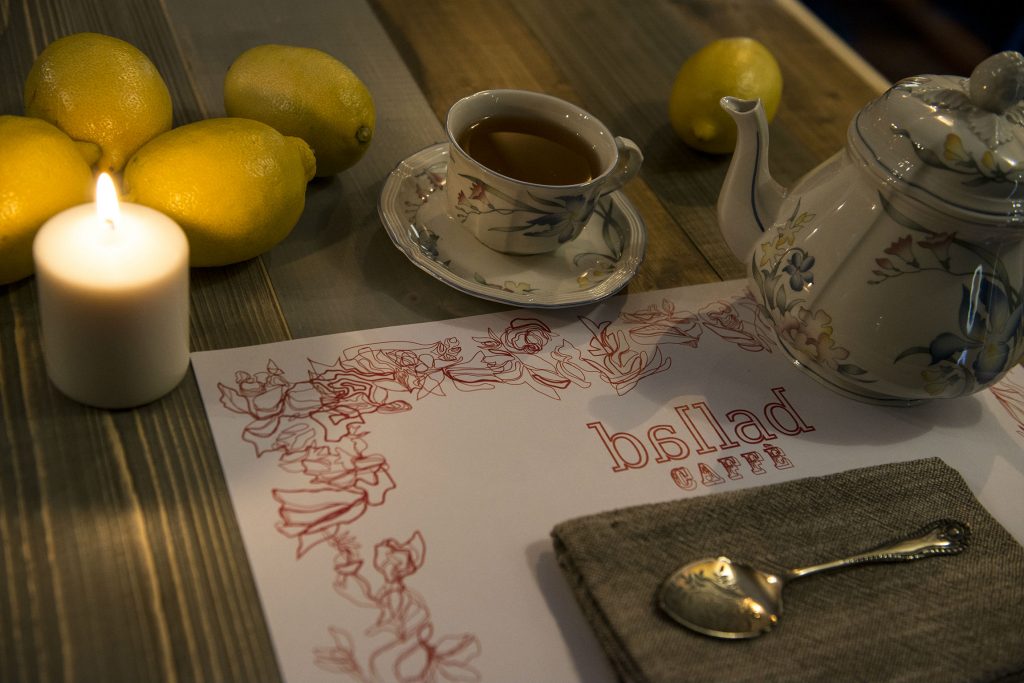 If, like me, you haven’t made plans for New Year’s Eve in Rome yet but don’t want to risk missing out, Ballad Caffè is preparing a stellar dinner for December 31st. Accompanied by an extraordinary New Year Quintet, led by the voice of Alessandra Diodati (and followed by the first jam session of the New Year), Andrea has prepared a sensational menu including rack of lamb and seared mullet which concludes with the traditional lentils and pig’s trotter at midnight. The price per person for the dinner and concert is €150. Book now to avoid disappointment by calling the number below. More information is available via the link.

Testaccina was a guest of Ballad Caffè