There’s a scene in Fifty Shades of Grey where Christian Grey is ordering a gin and tonic. (Don’t ask me how I know this, dear reader. Journalists have to READ EVERYTHING). He says to the waiter: ‘Hendricks if you have it, otherwise Bombay Sapphire. Cucumber with the Hendricks, lime with the Bombay.’

In my sporadic gin and tonic-drinking career, I have encountered both lime and cucumber variations: at Jallans, in my youth, knocking back the classic Gordons and tonic with lots of zingy lime, quartered and crushed round the edge of the glass to make your mouth pucker. Then of course, there was THAT night at Ai Tre Scalini in Monti, when we asked the barman to come up with something tantalising, and ended up sipping ice-cold glasses of Hendricks, tonic and cucumber infused with handfuls of black peppercorns all evening – absolutely delicious.

Armed with this fairly shabby knowledge of quaffing gin, I arrived at The Gin Corner in Rome with the air of a rather keen pupil ready to positively soak up knowledge in the aim of becoming a Gin Master. I had some vague idea that a Gin Masterclass was just an excuse to down rather large quantities of gin, while talking about downing large quantities of gin. I was happy to be proven (mostly) wrong.

This was the sixth Gin Masterclass being held at The Gin Corner this year, but no prior knowledge of the spirit was necessary. A few words about the venue: this was my first time at The Gin Corner and I really liked it. Inhabiting a cosy ground-floor corner of the rather swanky Hotel Adriano, in smart Via di Pallacorda, if you have any reservations about hotel bars you should absolutely leave them at the door. This bar, positioned next to reception which just adds to the welcoming vibe, has the edge and expertise of a speakeasy or dedicated cocktail bar – under the watchful eye of talented bar manager Patrick Pistolesi – with all the comforts of a luxury hotel. It’s animated without being stuffy – just a lot of fun. 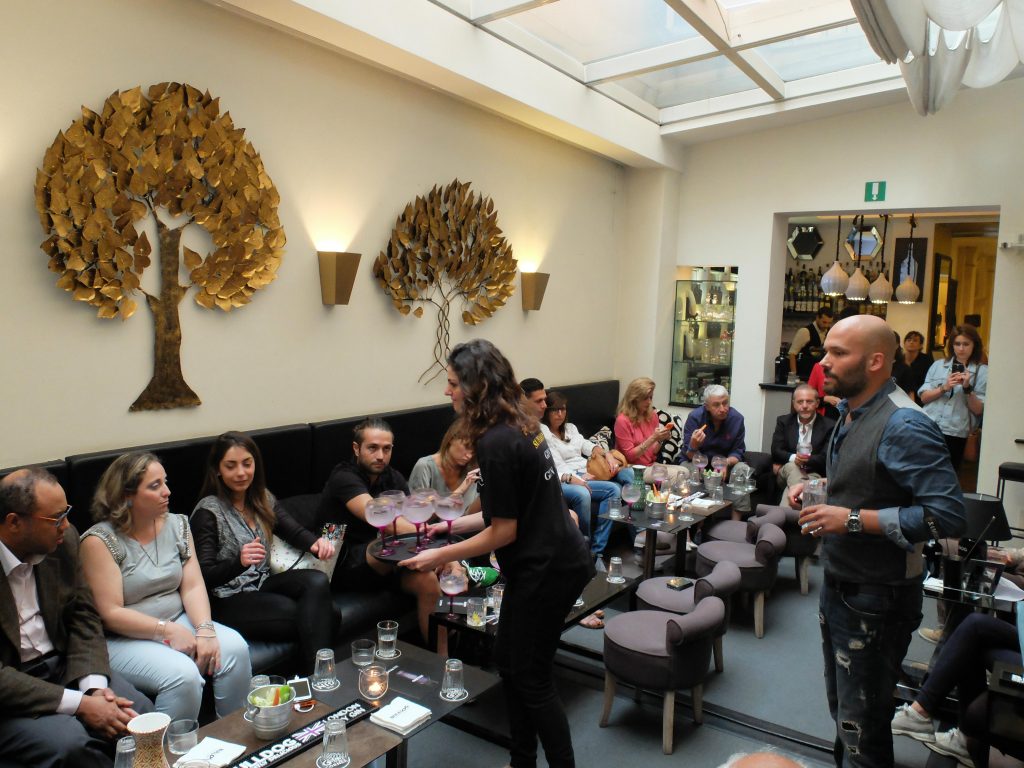 Co-hosts for the evening were Bulldog Gin, a relatively young brand which has really hit the crest of the gin trend currently sweeping the globe. If you thought craft beer was cool, make some space for gin in your mental cabinet. This humble spirit, often left literally on the shelf in rather fusty pubs in former years, has made a big comeback in the last decade. Launched in 2007, Bulldog is a quadruple distilled London Dry gin made in the UK and imported into the US by Campari America. Distinguished, I am told, by 12 botanicals, it jumped in fame in Europe when the gin trend hit Spain in 2009 and is gaining a cult following in the US and the UK too, while still growing rapidly on the Continent.

So what did I learn? Well, in no particular order…

The Bulldog Ambassador, accomplished bartender Samuele Ambrosi, started the class with a comprehensive history of gin – I wasn’t expecting quite so much backstory. But when he started projecting William Hogarth engravings of a gin-soaked British public onto the back wall of the bar, something important started to sink in. Gin is the drink that brought England to its knees in the 1740s – literally. It was known as Mother’s Ruin not just for inducing inebriation but because of the amount of illegitimate children that were spawned as a result of gin addiction. There was an apocalyptic moment when England was almost sunk by alcohol abuse, as its entire population put away 10 litres of gin per capita per year. Probably good to remember. 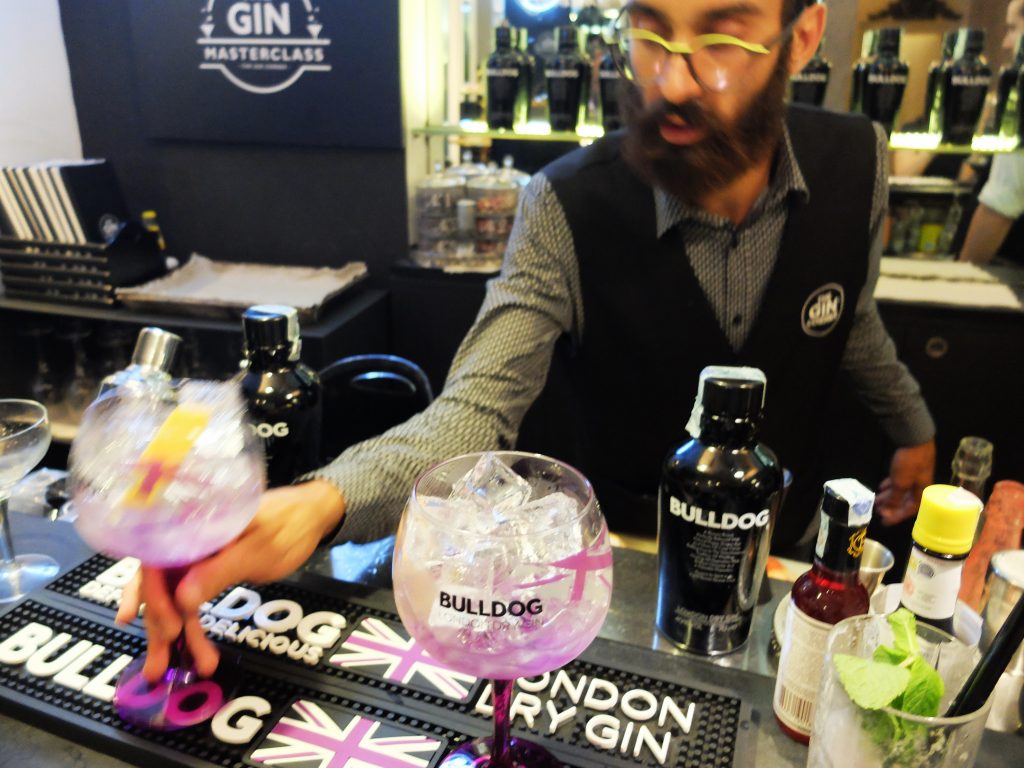 In a moment of small-talk before the class, I asked the gin Ambassador, trying to look nonchalant, ‘So, is Bulldog more of a cucumber or a lime gin?’ Thankfully, I was treated with kindness (that’s the last time I’m quoting Fifty Shades in smart company). I was told that it went well with citrus flavours, particularly grapefruit. Handed my first Bulldog and tonic with a hefty slide of pink grapefruit, I can confirm that it was absolutely delicious.

3. The names have a history

Gordons, Tanqueray, the Gimlet. As far as I was concerned, these were just names on a shelf or made up items in a menu. But they all have an illustrious history. First produced in 1769, Gordons was part of the wave of new legislation for gin, an official and expensive brand designed to deter drunks. In 1898 Gordon & Co. amalgamated with Charles Tanqueray & Co. to form Tanqueray Gordon & Co. Tanqueray, today Gordon’s sister brand in the Diageo stable, is the biggest selling import gin in Los Angeles (which is why it keeps turning up in rap lyrics). Gimlet, a cocktail made from gin and lime juice, has an equally interesting story: Surgeon General Sir Thomas Gimelette, (1879-1913), first added lime cordial to the daily gin tot of the men of the Royal Navy under his care to help combat the ravages of scurvy on long voyages. The Gimlet was named after him. 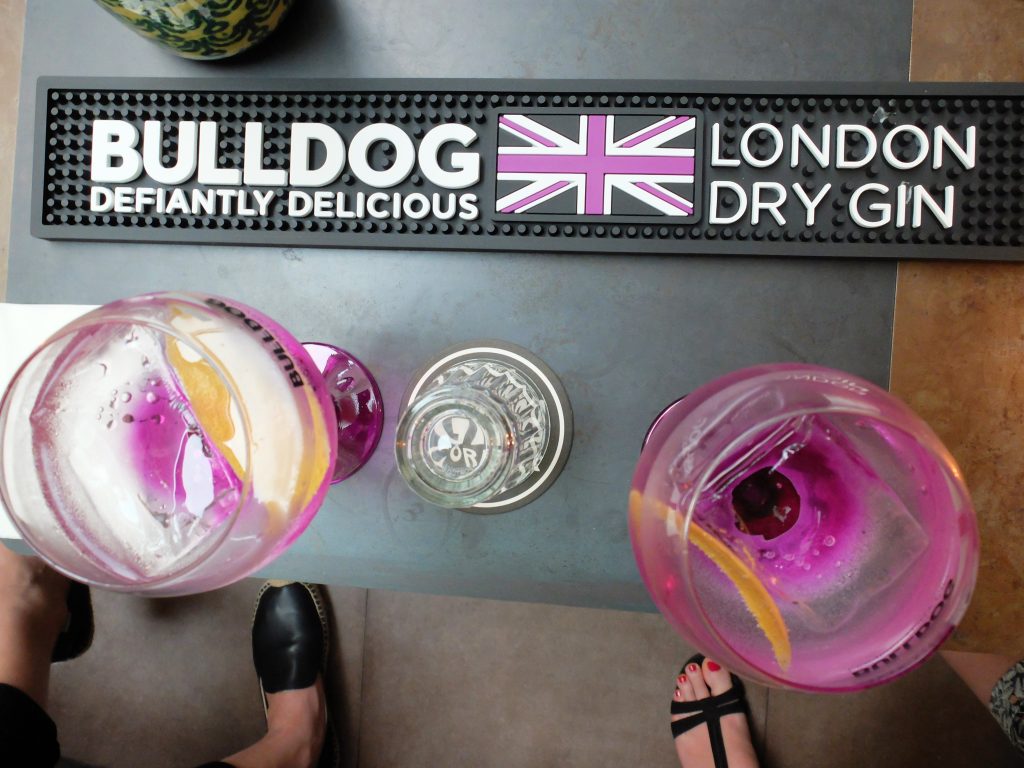 4. You can’t have too much ice

Have you ever got irritated with a barman who seems to be adding excessive quantities of ice to your cocktail or long drink? He’s not trying to water it down – quite the opposite. If you place just a cube or two of ice in a glass it will melt faster. The cluster of ice helps maintain the temperature of the drink longer and slows the melting time. Important and ingenious.

In Casino Royale, James Bond (or Ian Fleming) invents the Vesper Martini. James says to the bartender: “Three measures of Gordon’s, one of vodka, half a measure of Kina Lillet. Shake it very well until it’s ice-cold, then add a large thin slice of lemon peel. Got it?” The shaking is important – Gordon’s was reputed to contain elevated quantities of alcohol, so rattling the ice around rather than stirring it dilutes the drink slightly. Right on James, you’ve got a card game to win. 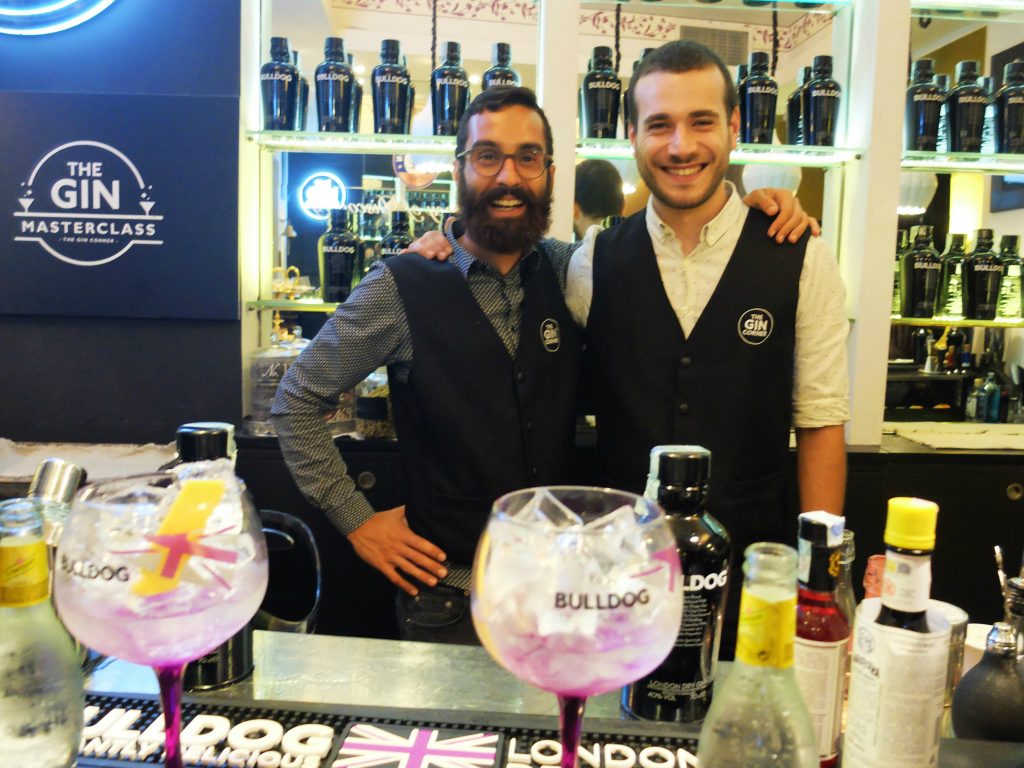 6. Gin is most definitely in

Gin is back from the dusty recesses of the drinks cabinet and it’s a most welcome return. Refreshing on a hot day and a great aperitif, it’s a highly versatile spirit and definitely merits an entire bar dedicated to its charms. Thanks then to The Gin Corner in Rome – and cheers! 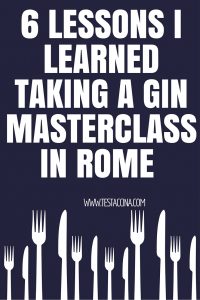 Testaccina was a guest of The Gin Corner, Via di Pallacorda 2, at its sixth Gin Masterclass this year. Following a break for the summer, Masterclasses will resume in October 2016.

Read Next: 7 Essential Gadgets for Travel Bloggers and Digital Nomads