Best things to do in Puglia: visit Adelfia for the festival of San Trifone

Adelfia is one of Puglia’s best kept secrets, distinguished by the unrivalled winter festival of San Trifone.  Marked by a religious procession through the winding streets of Adelfia on November 10, San Trifone is really a festival of lights, with illuminated decorations and fireworks defying the dark for a few days in the heart of November.

Located in southern Italy, Adelfia has an incredible recent history, an enviable food culture, and a cast of local characters which make it an unmissable Puglia destination.

If Adelfia is on your bucket-list for a winter trip to Italy, or indeed any time of year, read on for my full Adelfia travel guide!

Distinguished by a unique festival of lights during the first half of November, Adelfia is a remarkable destination for getting to grips with local traditions and the incredibly warm gift of hospitality found in this part of Italy.

Puglia has become one if Italy’s hottest destinations in recent years. Its dreamy coastline and striking cuisine have made this hospitable region world famous. While Puglia’s best beaches and aquamarine seas are popular with holiday makers during the hottest part of the year, the Puglia region actually has lots to offer all year round.

In winter the region’s characteristics change, but Puglia is equally worth your time in the low season. Still, it’s worth doing your homework before visiting to make sure you catch the best things to do in Puglia.

Best things to do in Puglia: visit Adelfia

Off-season, the red blaze of sunsets over the sea in Puglia is exchanged for the fire in the thicket and the sleeping vine across the rugged countryside in the region’s hinterlands, the slow buzz of the bees preparing to hibernate in the hive, and long walks across green-again fields as the year nears its time of reckoning. 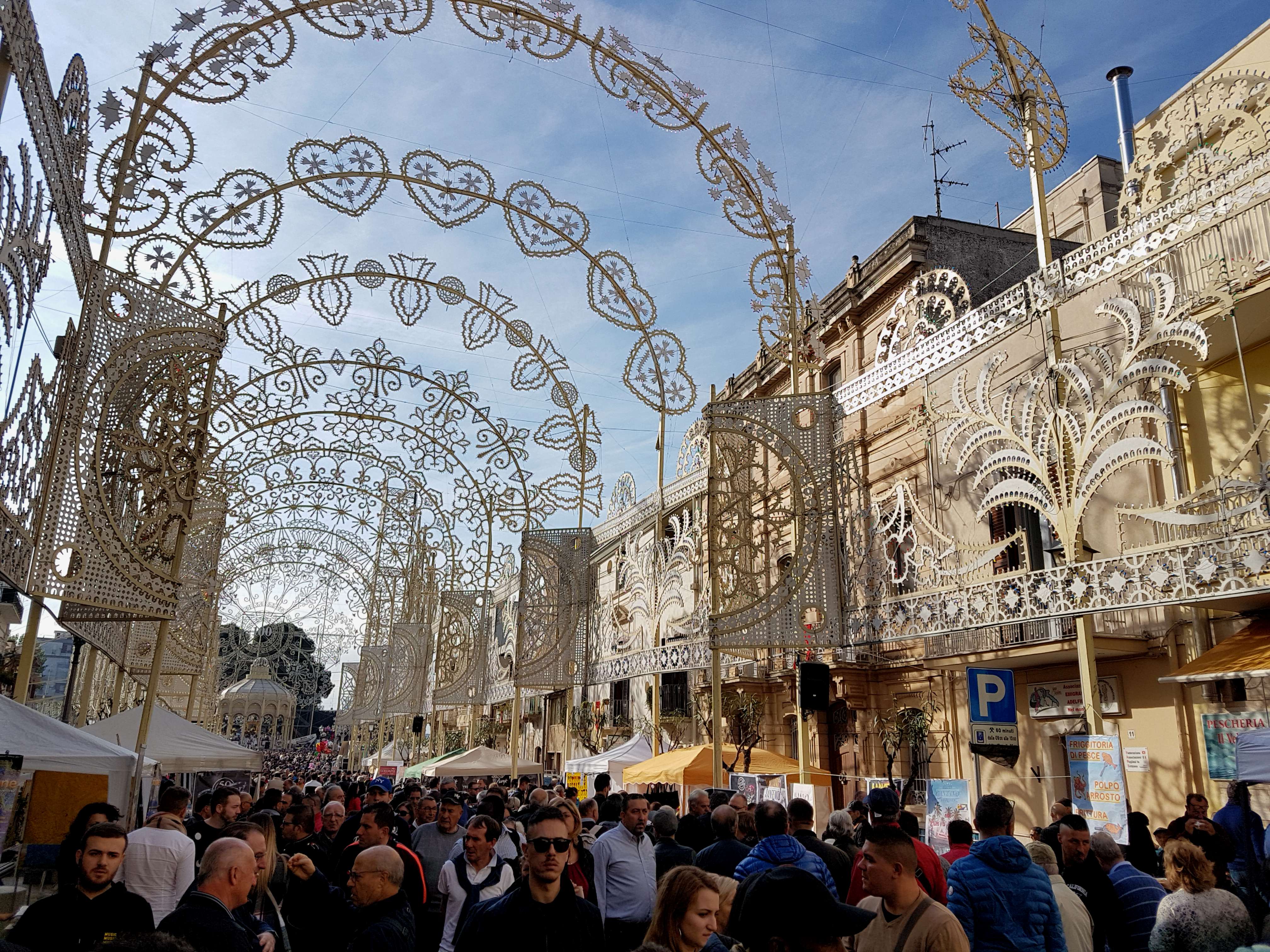 Right in the heart of the Puglia region, the town of Adelfia is a beacon for locals for its iconic annual saint’s day and the Adelfia festival of San Trifone.

However, outside Puglia, Adelfia is not so well known. Year round, its population of around 17,000 inhabitants split their time between rural activities, local businesses and working in the nearby city of Bari. During the festival of San Trifone, over 100,000 visitors fill its winding streets. 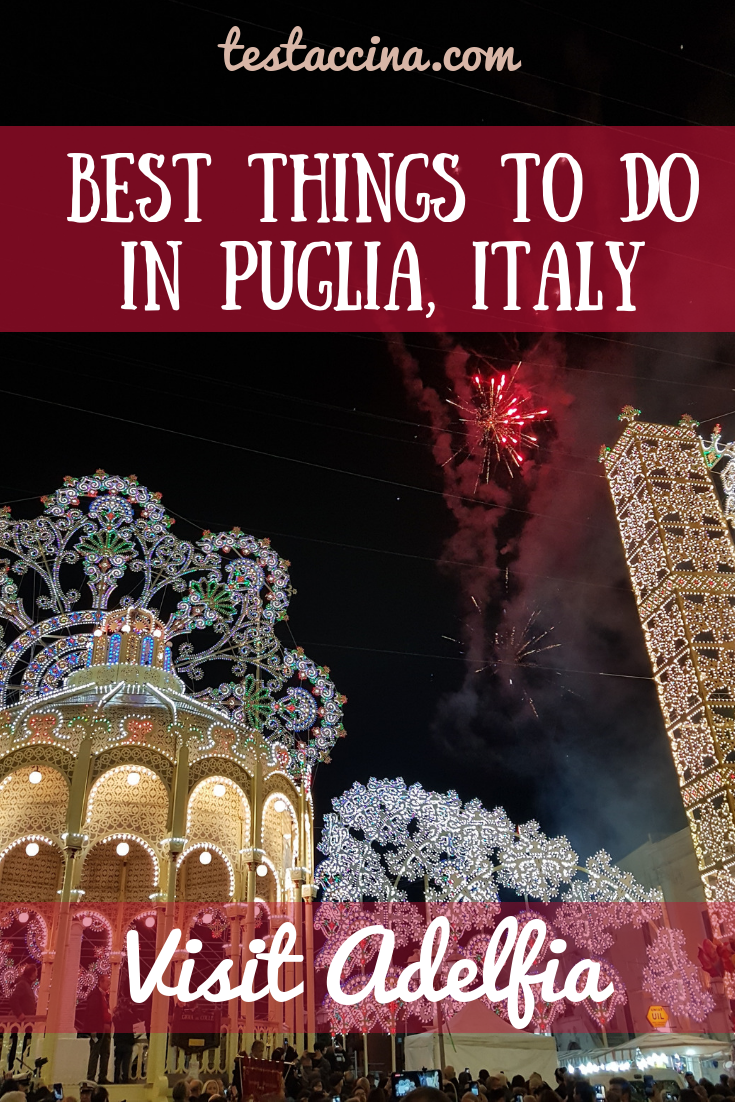 Distinguished by classic Apulian architecture, characterised by pale stone houses and churches in sand-coloured piazzas, it is city like no other. Adelfia in fact is the famed twin city of Puglia, unique in all of Italy. 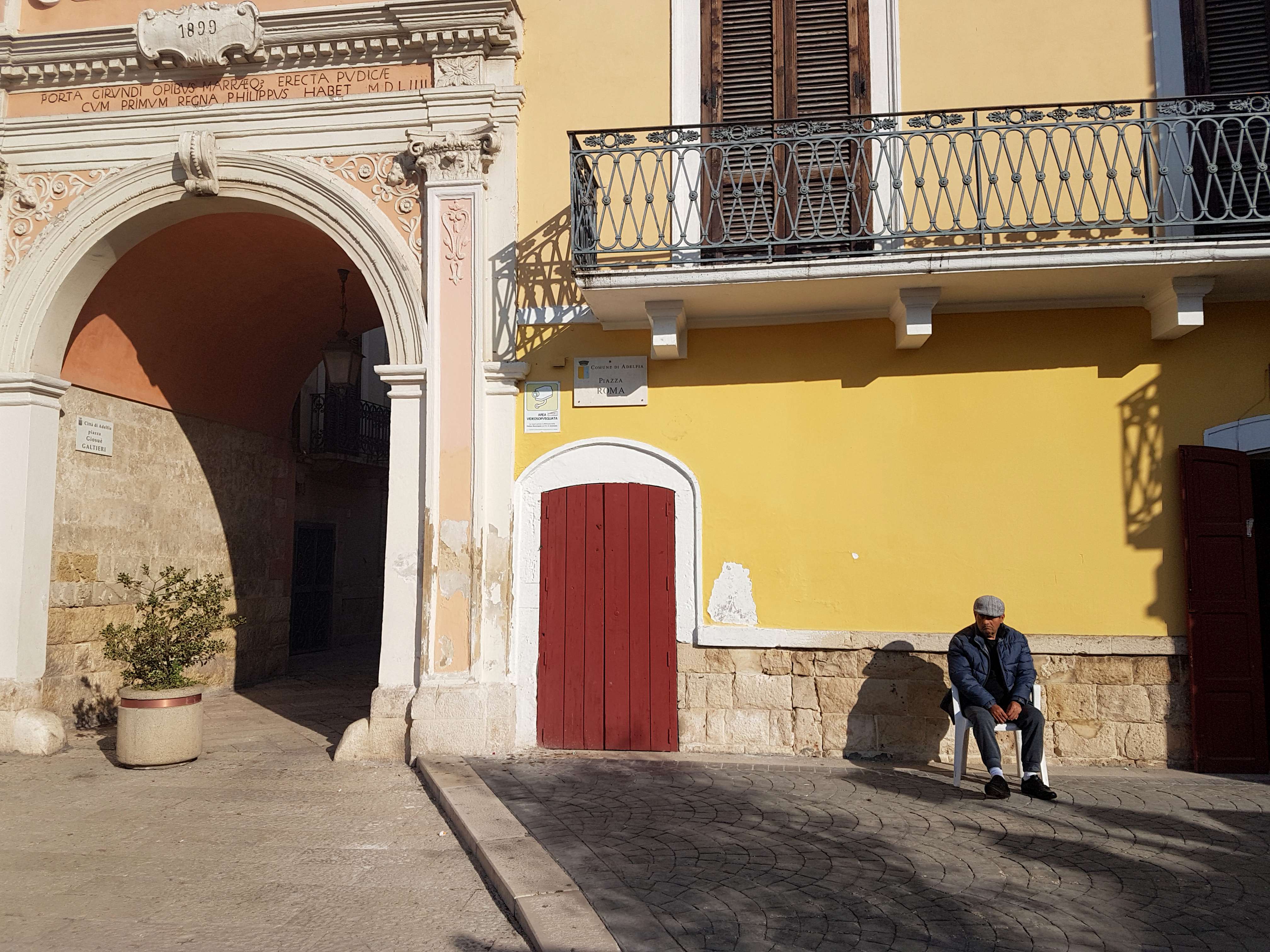 Adelfia was officially created in 1927, although its heritage is far older. The town represents the combination of two smaller towns, Montrone and Canneto, these days constituting its principle rioni or districts. While Canneto was founded by Norman invaders between 1080 and 1090, on the place of an ancient hamlet, dating back at least to the fourth century,  Montrone was founded in 980 by Greek refugees. The towns were united in 1927 under the new name of Adelfia, from the Greek term adelphòs, meaning brotherhood. 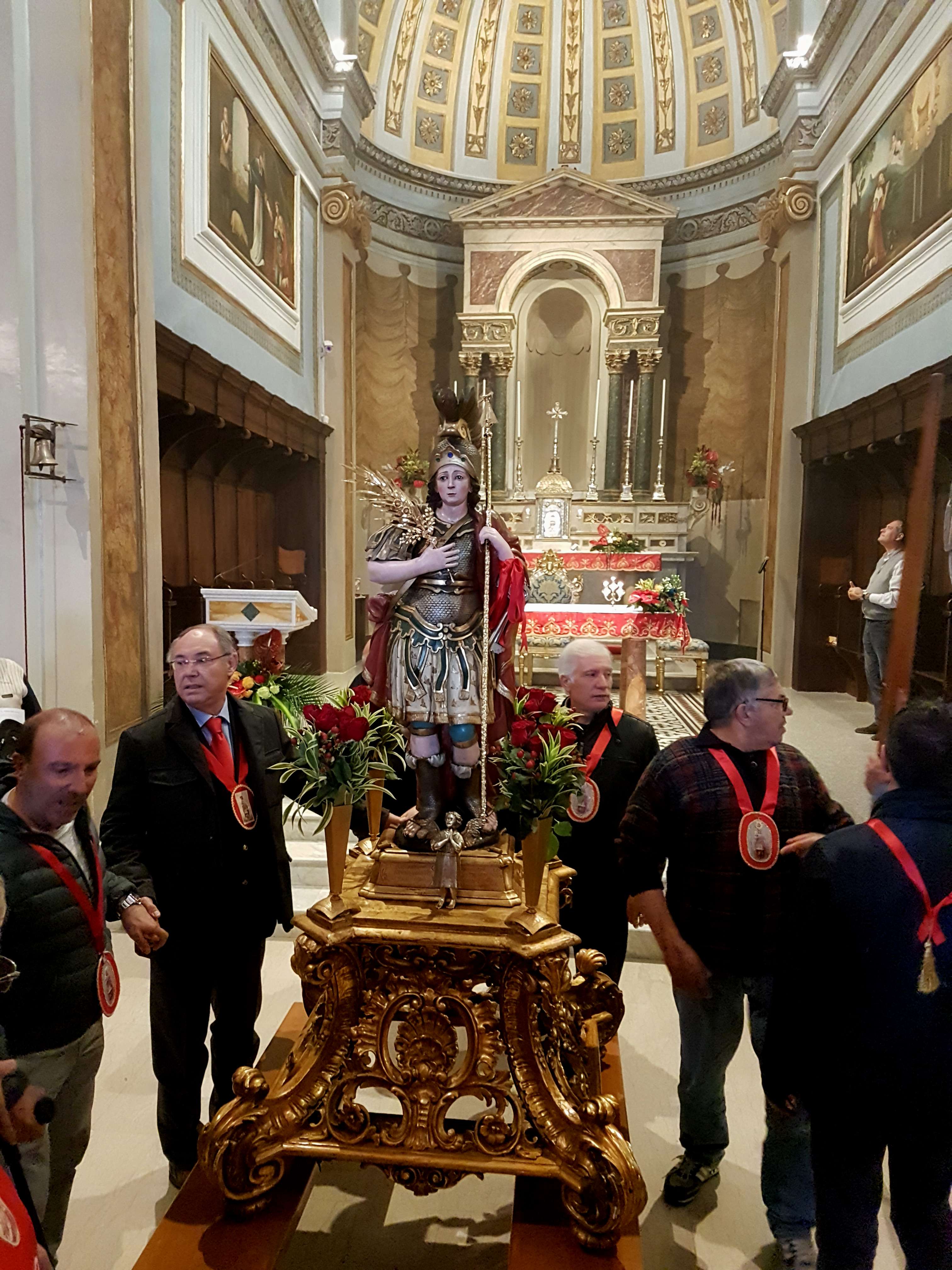 But despite this, Adelfia still feels in many ways like a city in two parts. There are two town centres, two mother churches, two dialects, and even two patron saints (and therefore two patron saints’ days). The district of Canneto today is a picture-postcard neighbourhood dominated by its principle church, Chiesta della Madonna della Stella, dedicated to Mary, which was built, consecrated and expanded between 1761 and 1763. Today, it guards the reliquary containing the bones of Saint Vittoriano, patron saint of Canneto and co-patron saint of Adelfia. 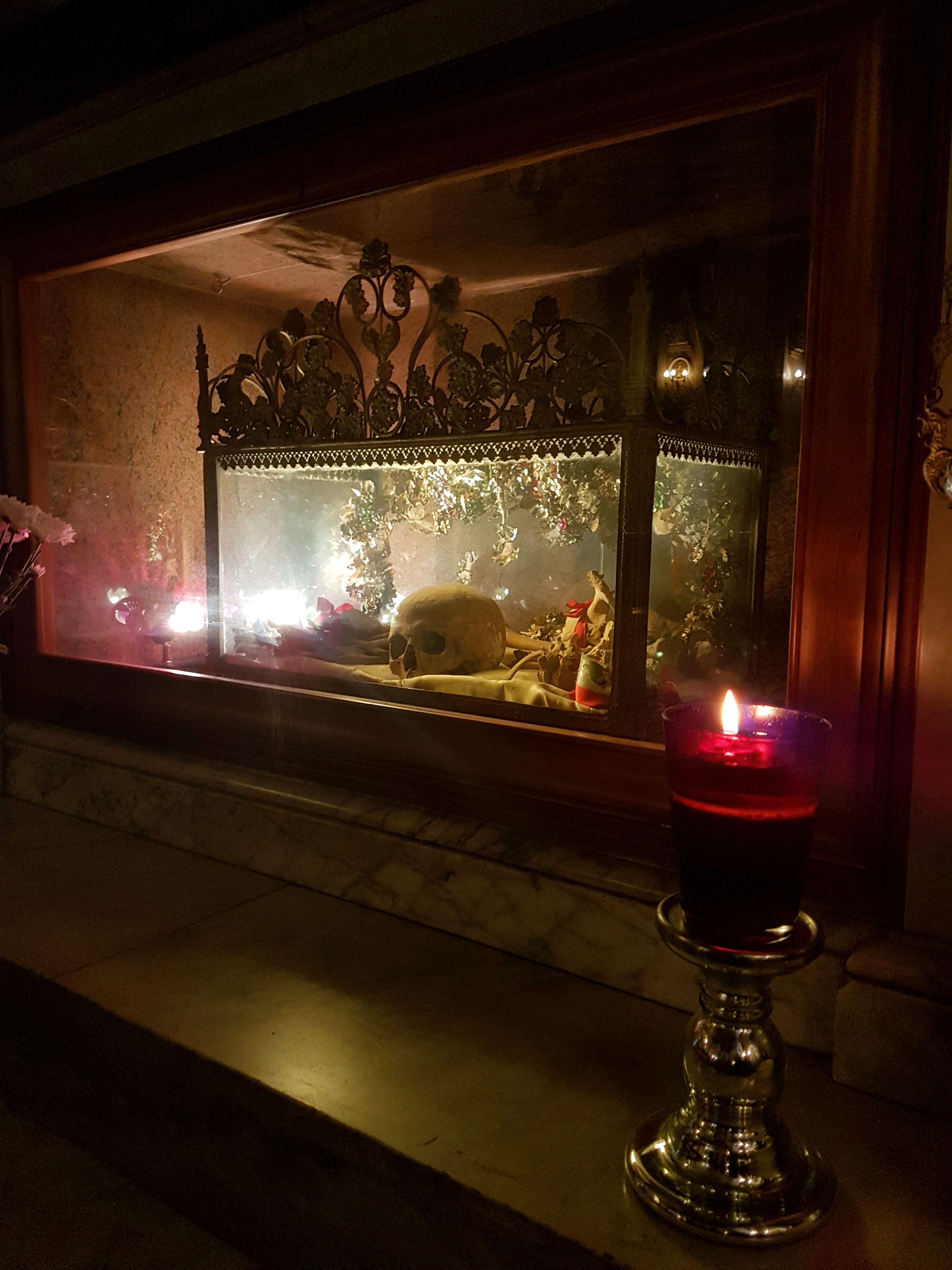 Best things to do in Puglia: the festival of San Trifone Adelfia

Yet if you visit Adelfia you are far more likely to hear about the patron saint of Montrone, San Trifone. That’s simply because his saint’s day is celebrated in the most spectacular fashion, making it one of the most remarkable religious processions in Italy. In fact, the festival of San Trifone Adelfia is definitely one of the best things to do in Puglia. 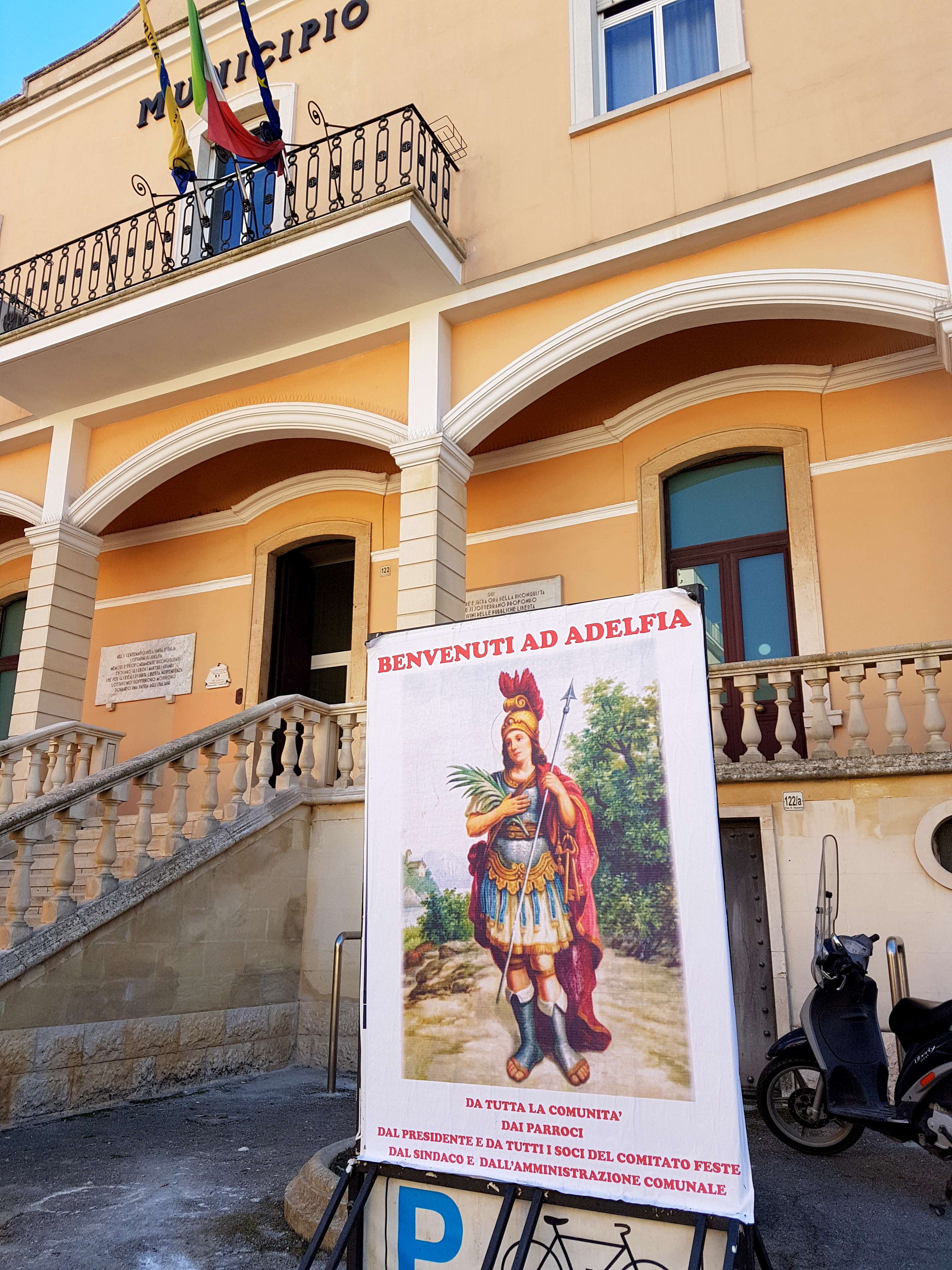 San Trifone was martyred in the lands now known as Turkey in the days of Roman persecution for refusing to renounce his Christian faith. This act of sacrifice translates into one of the greatest festivals of fire and light in all of Italy today: 10 days of devotion at the beginning of November culminating in an explosion of colour, defiance and hope.

2019 marks 101 years of the light display which in some ways defines the event. Fireworks during the day, hot air balloons and devotion to the oriental Saint, San Trifone, paint a picture of a truly unique experience and the last, great local festival of the year in Puglia. 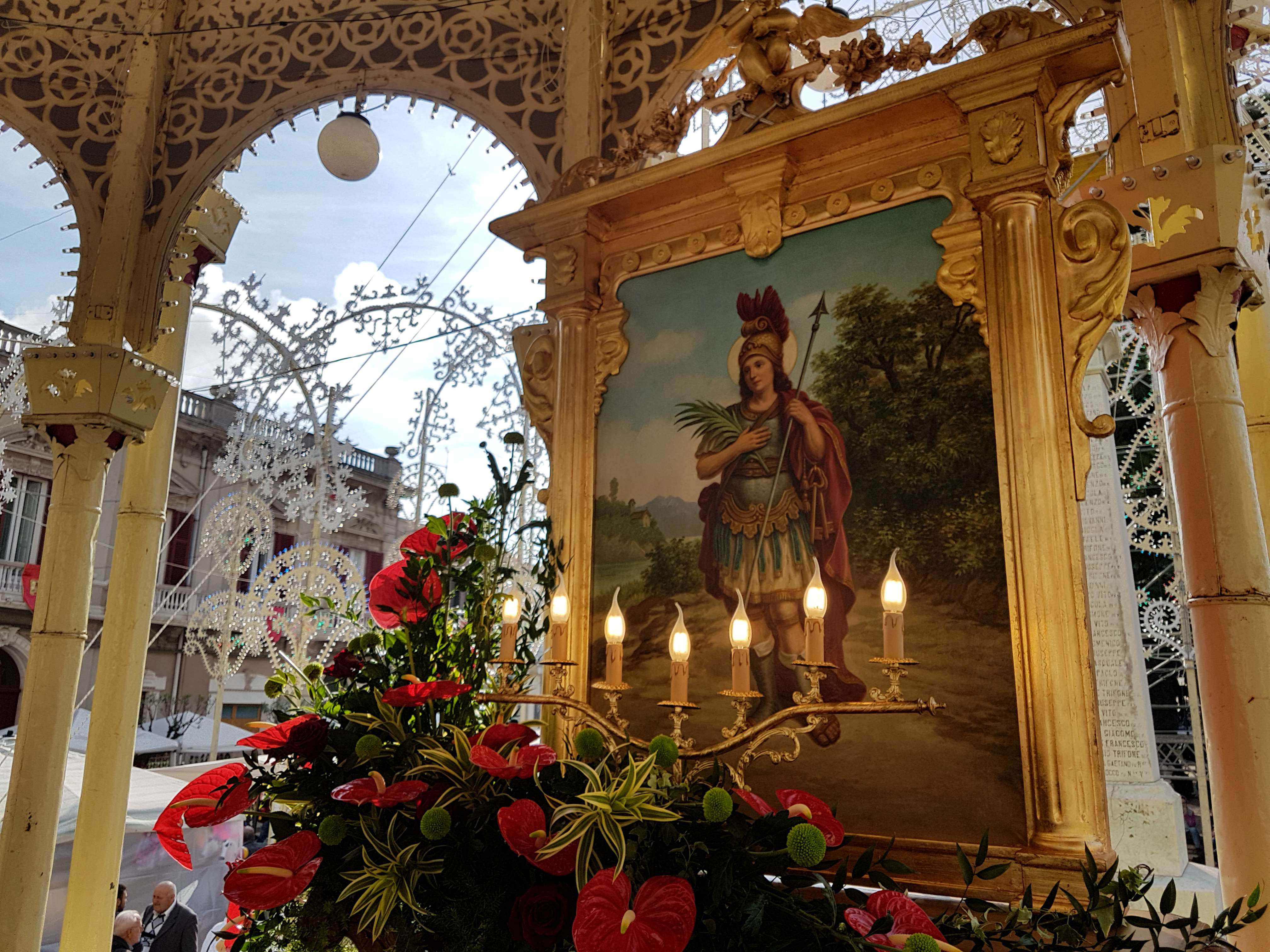 The festivities begin on the evening of 9 November, when the people of Adelfia get ready to welcome San Trifone. During the days preceding 9 November, an incredible feat of engineering sees huge walls of scaffolding erected day and night to support what will become the light displays during the festival. As darkness falls, the citizens of Adelfia – and any lucky visitors – can see many of these coloured lights throughout the city, glimmering and glowing to warm the dark.

A band strikes up to announce the beginning of festivities and around 8 pm, a great procession starts bearing the treasured painting of San Trifone through the streets of Adelfia. This is one of the most dramatic moments of the event, as the light displays are turned on, huge panel after huge panel, as the saint passes. 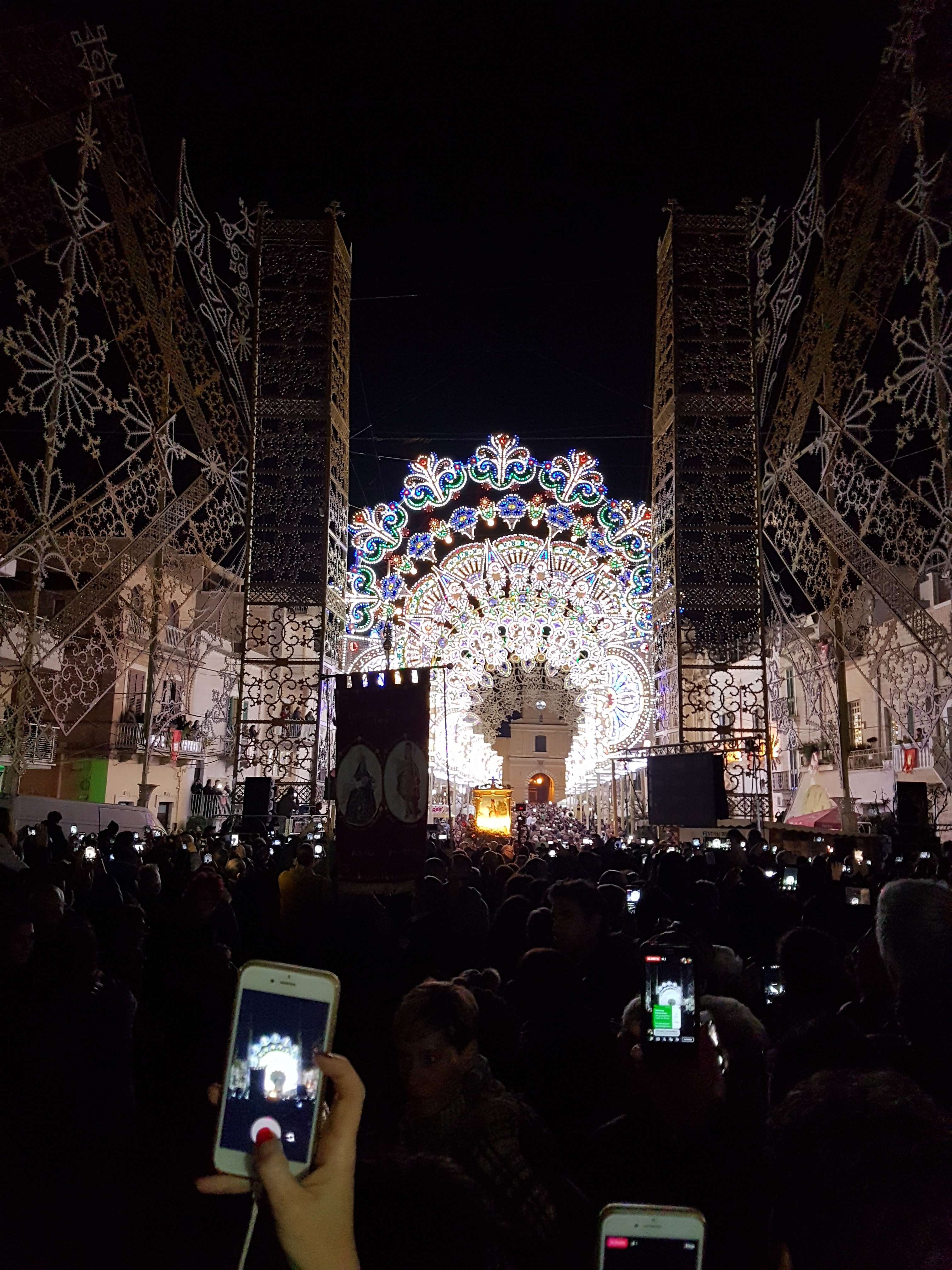 A police motorcade runs ahead to part the impassioned crowd, until all the lights in the central piazza have been lit. Shortly after, a flaming miniature hot-air balloon, like an oversized Chinese lantern, is sent up into the sky, which is followed by a sensational firework display in honour of San Trifone of Adelfia. 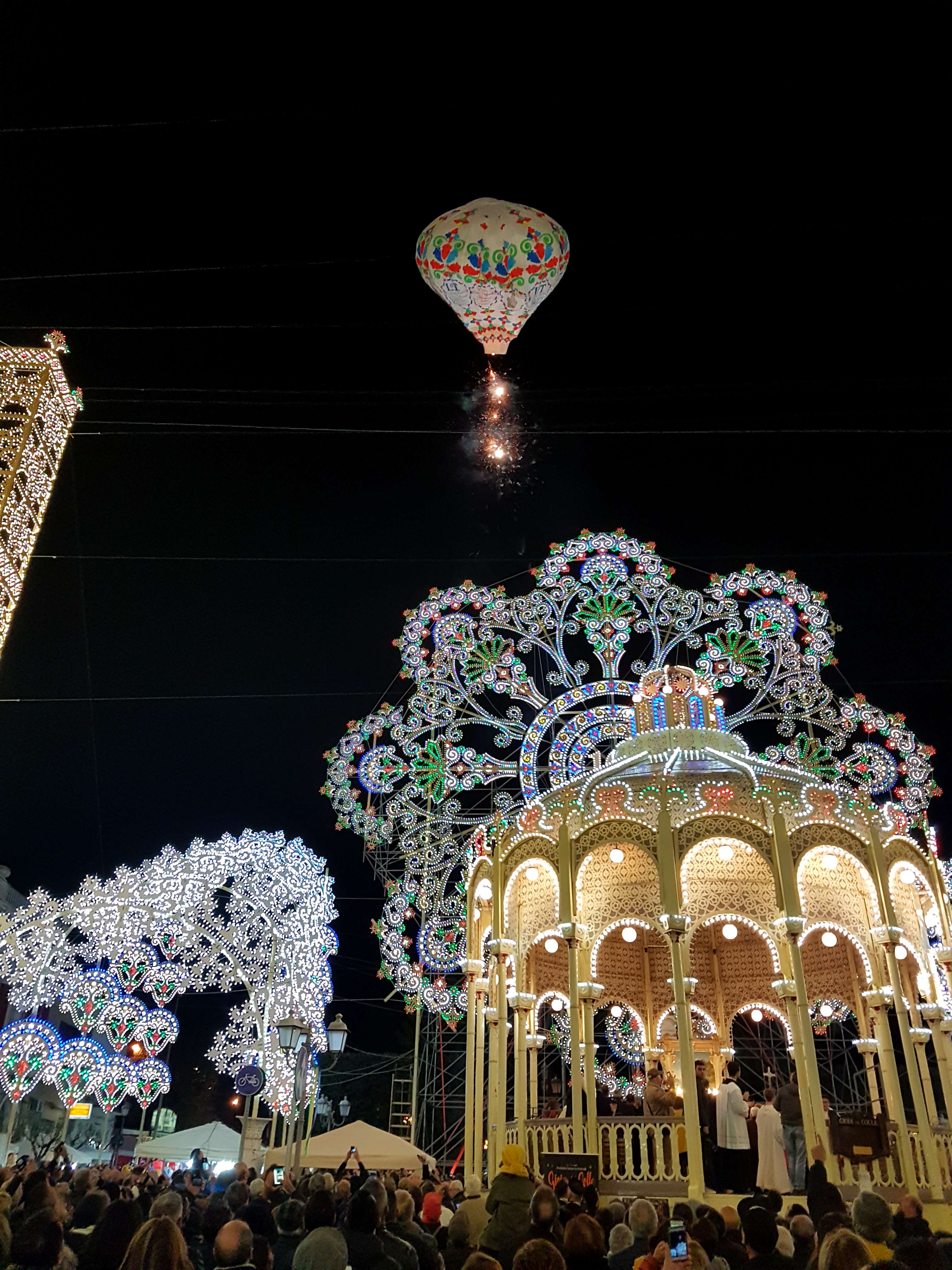 Adelfia is famous for its fireworks, and indeed, many locals are proud to call themselves firework makers by trade.

The fireworks go on for a number of hours, as an act of defiance against the dark and the sign that San Trifone has returned. Just a unique experience and one of the best things to do in Puglia. 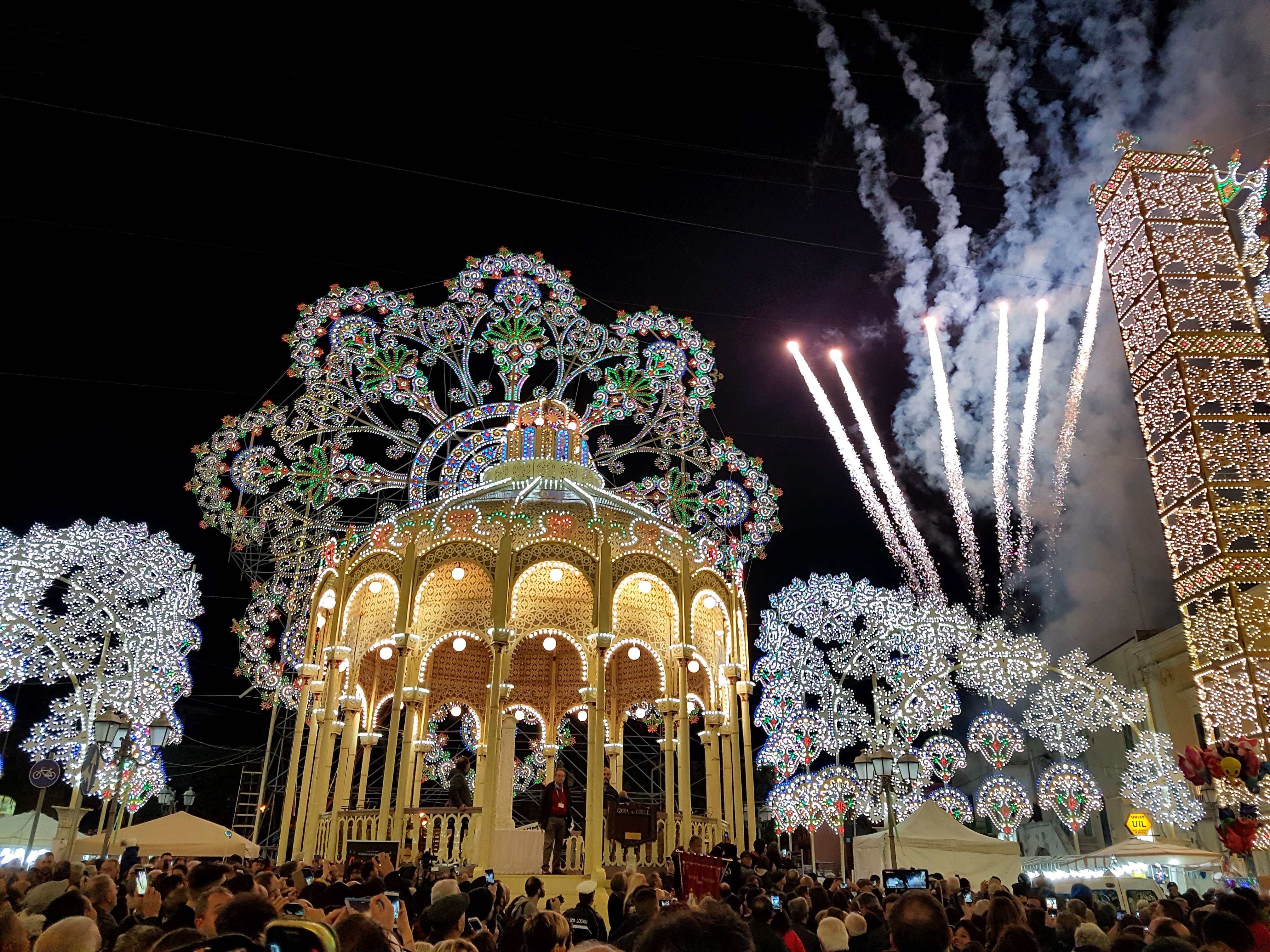 The festival continues on 10 November with another, even more important saintly parade, plus Adelfia’s famous daytime fireworks in honour of San Trifone. 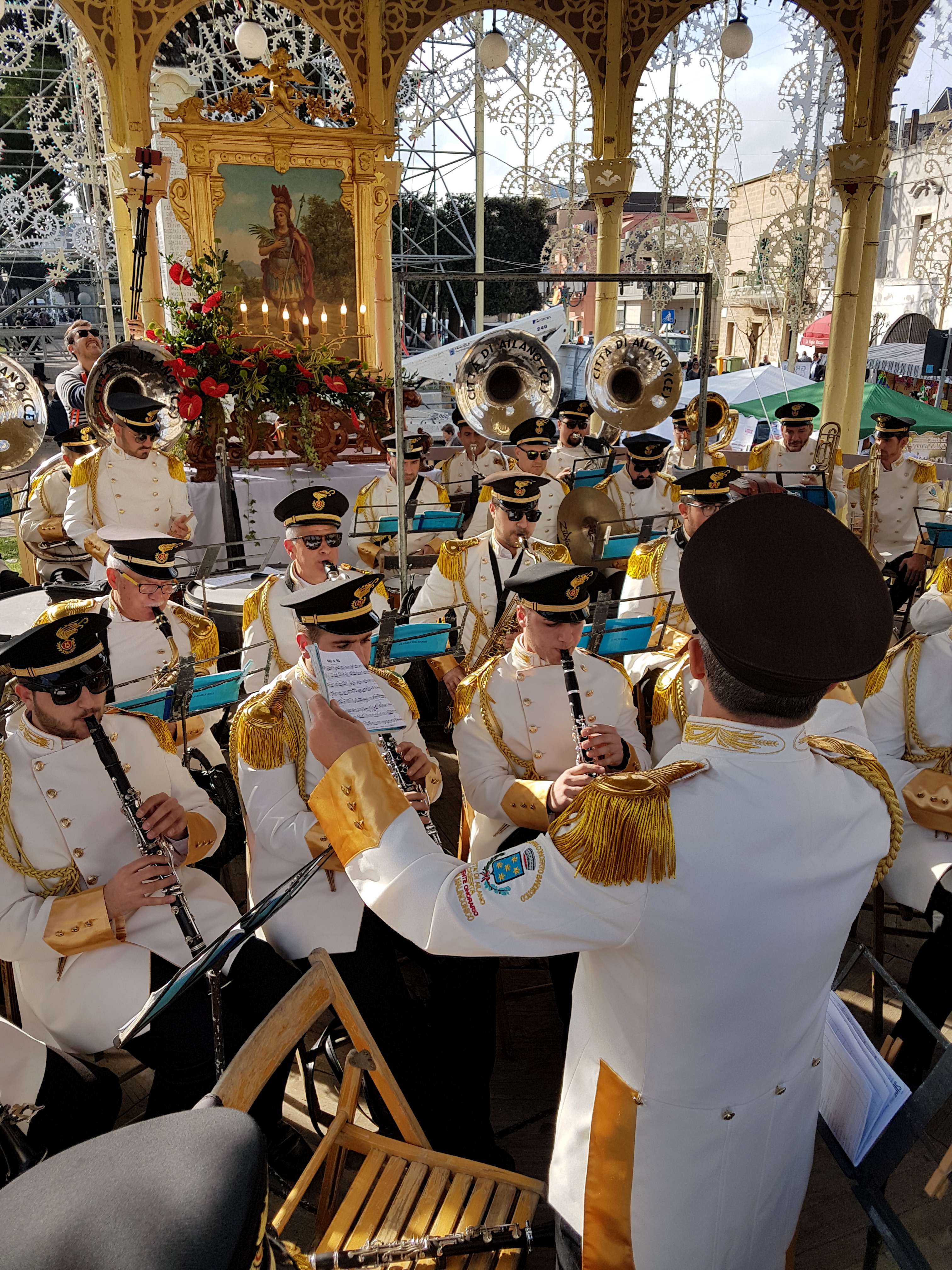 However, all that is preceded by a musical display on the town’s bandstand, whilst the crowds gather below. Next up, civic leaders mount the stage for Adelfia’s famous ‘raffle’. Rather than a contest pulling tickets out of a bag, this raffle is actually a kind of bidding war featuring charitable donations.

The civic leaders read out the sums of money which have been donated by the citizens of Adelfia for the festival. The incredible thing is that money arrives from all over the world. 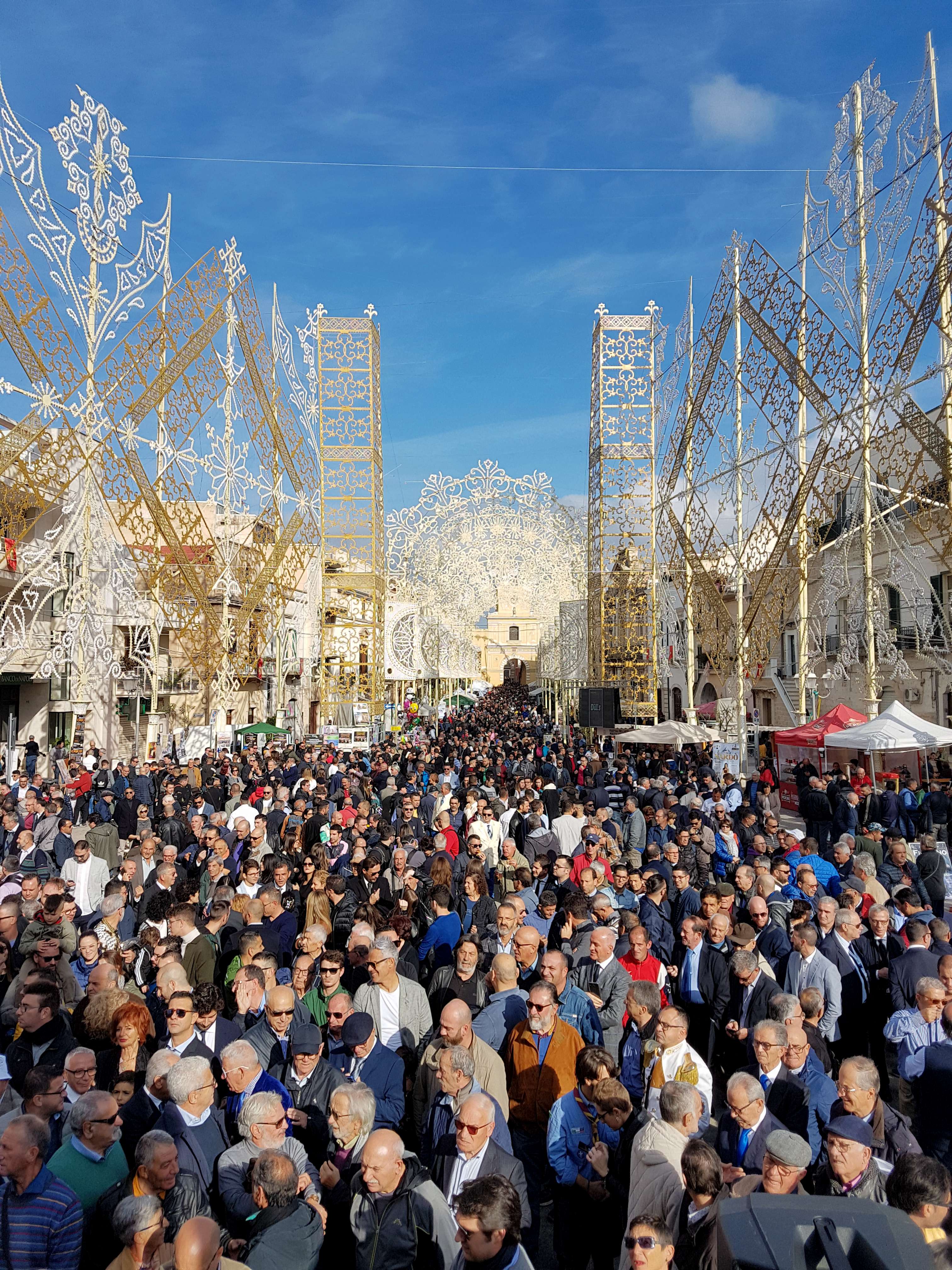 Between the 19th and the 20th century, Adelfia witnessed a considerable emigration towards the United States. So donations roll in from all over the world, and a prize is awarded to the biggest donor. Every year, local hero Mario De Palo makes sure he wins the great honour of being the city’s most generous patron. 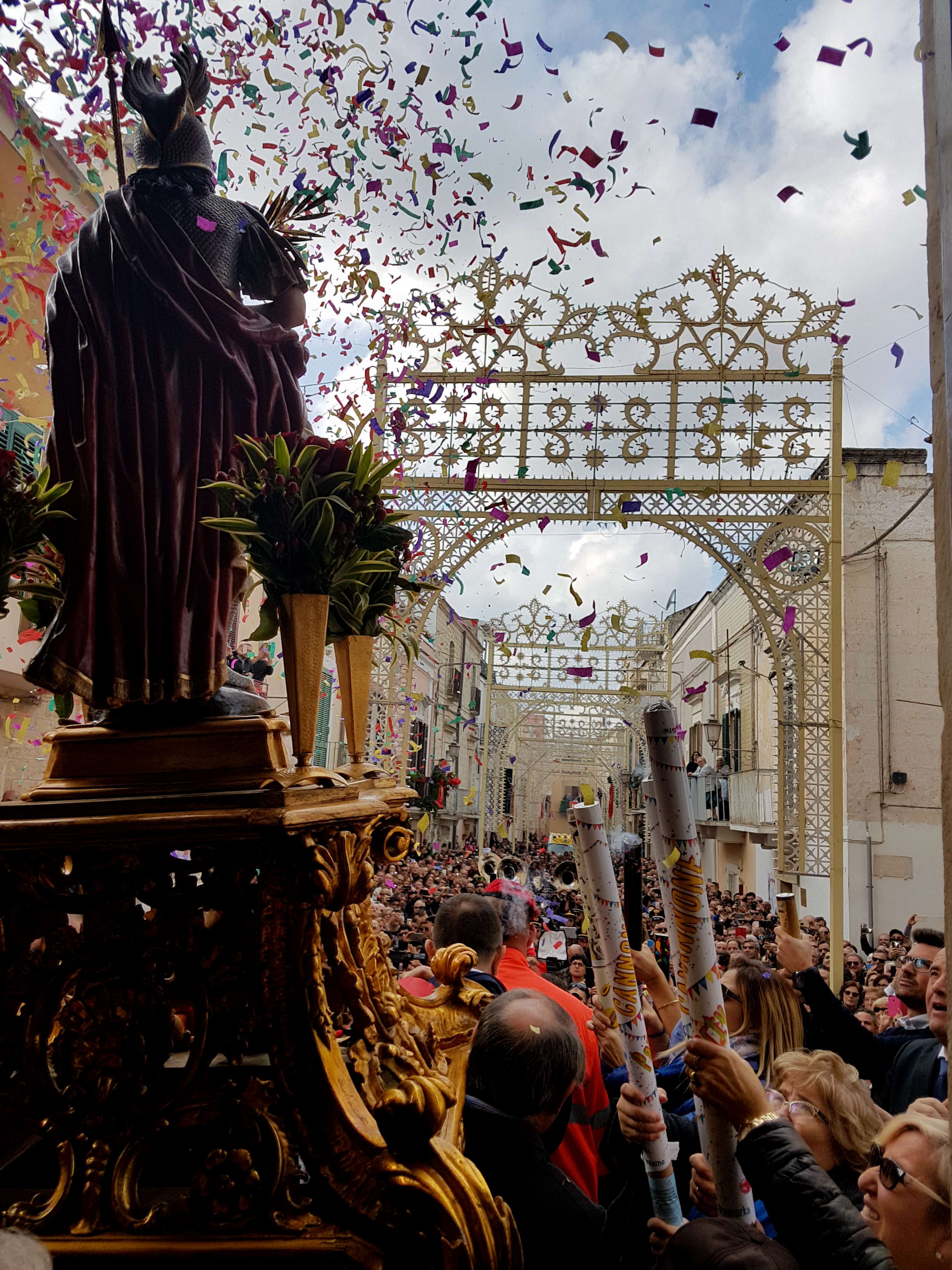 Adelfia is one of the best places to visit in Puglia, Italy, for the San Trifone Adelfia festival

After the raffle, there is a hive of activity in Chiesa di Santa Maria del Principio, Montrone’s greatest church. Here. the large, hand-painted statue of San Trifone is readied for his full procession through the city, on the shoulders of the city’s most generous donors present.

As San Trifone exits the church, the town erupts in joy. 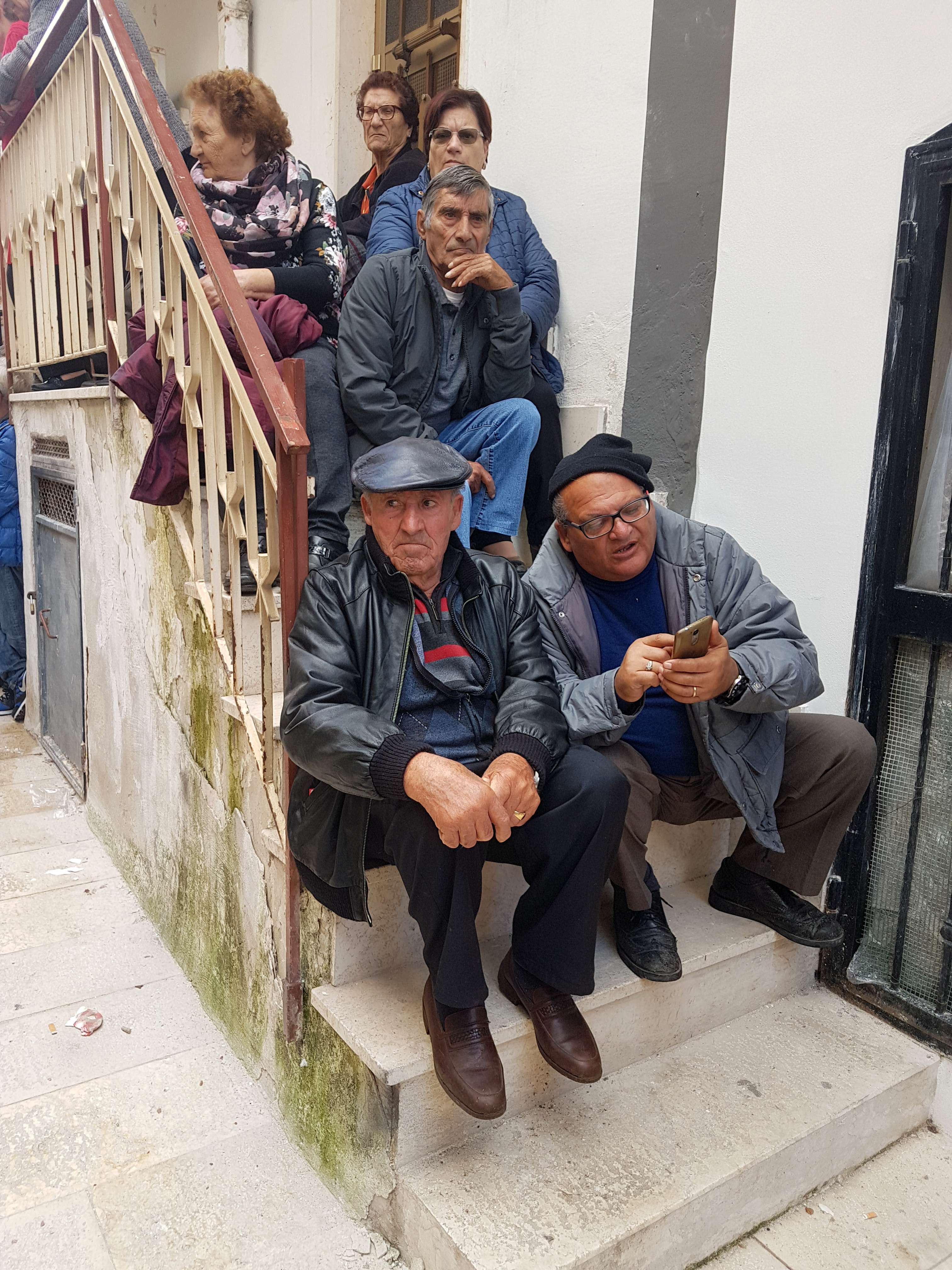 In order to catch a glimpse of the saint, locals and visitors cram every nook and cranny of the city, waiting on steps and hanging out of windows. Some people even camp out over night to secure the best views.

After the saint has passed, improptu stands and grillmasters fill the streets, serving citizens with hot roast lamb on skewers, as well as lamb offal dishes. It’s a pretty rustic affair, best washed down with a glass of local Primitivo wine. 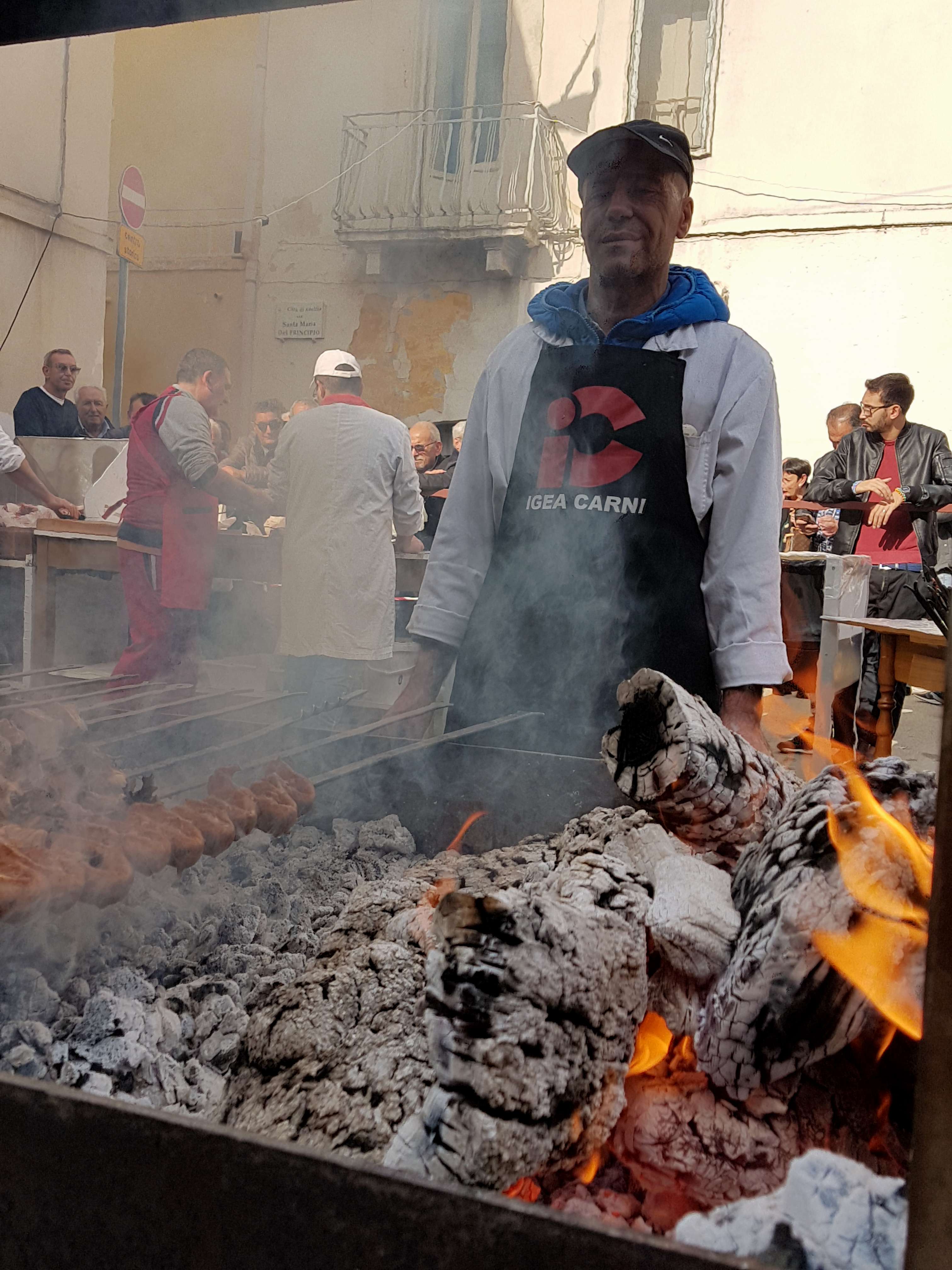 The afternoon of November 10th in Adelfia is spent on the roofs of the city, watching its unique daytime fireworks in honour of San Trifone of Adelfia. Distinguished by deafening blasts, rhythmic raps and coloured smoke, this three hour display is also a competition between local pyrotechnic firms and their sponsors to decide who lights up the sky most impressively. This, meanwhile, is best enjoyed with a sharp nip of local grappa, family and friends. 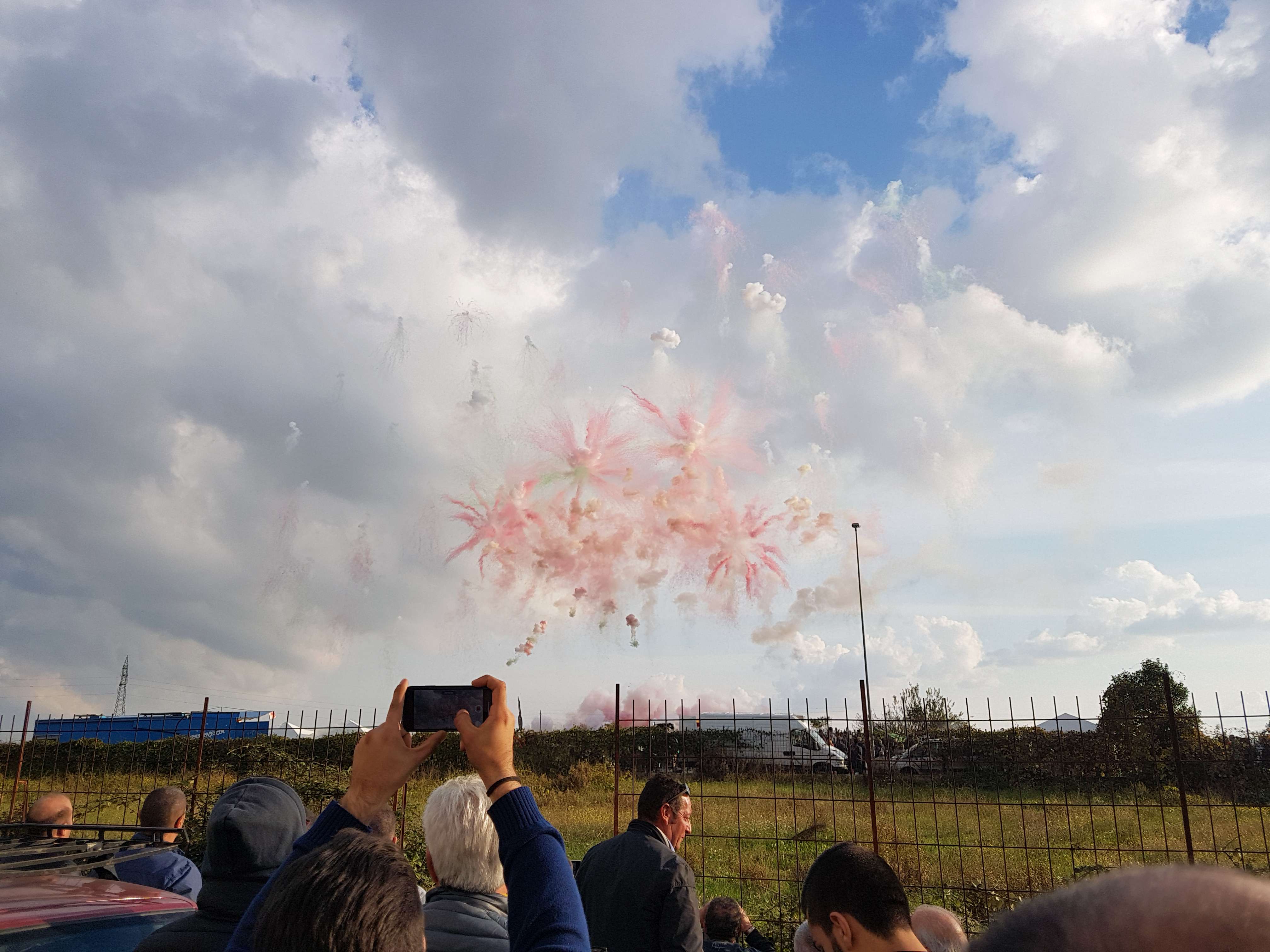 The fireworks start to die down as dusk arrives, before another battery of flares and artistic smoke arrives to light the dark.

Indeed, one of the things I will remember most about my weekend in Adelfia is the extraordinary skies, etched with rockets and bright smoke, during a firework display spanning nearly 24 hours. 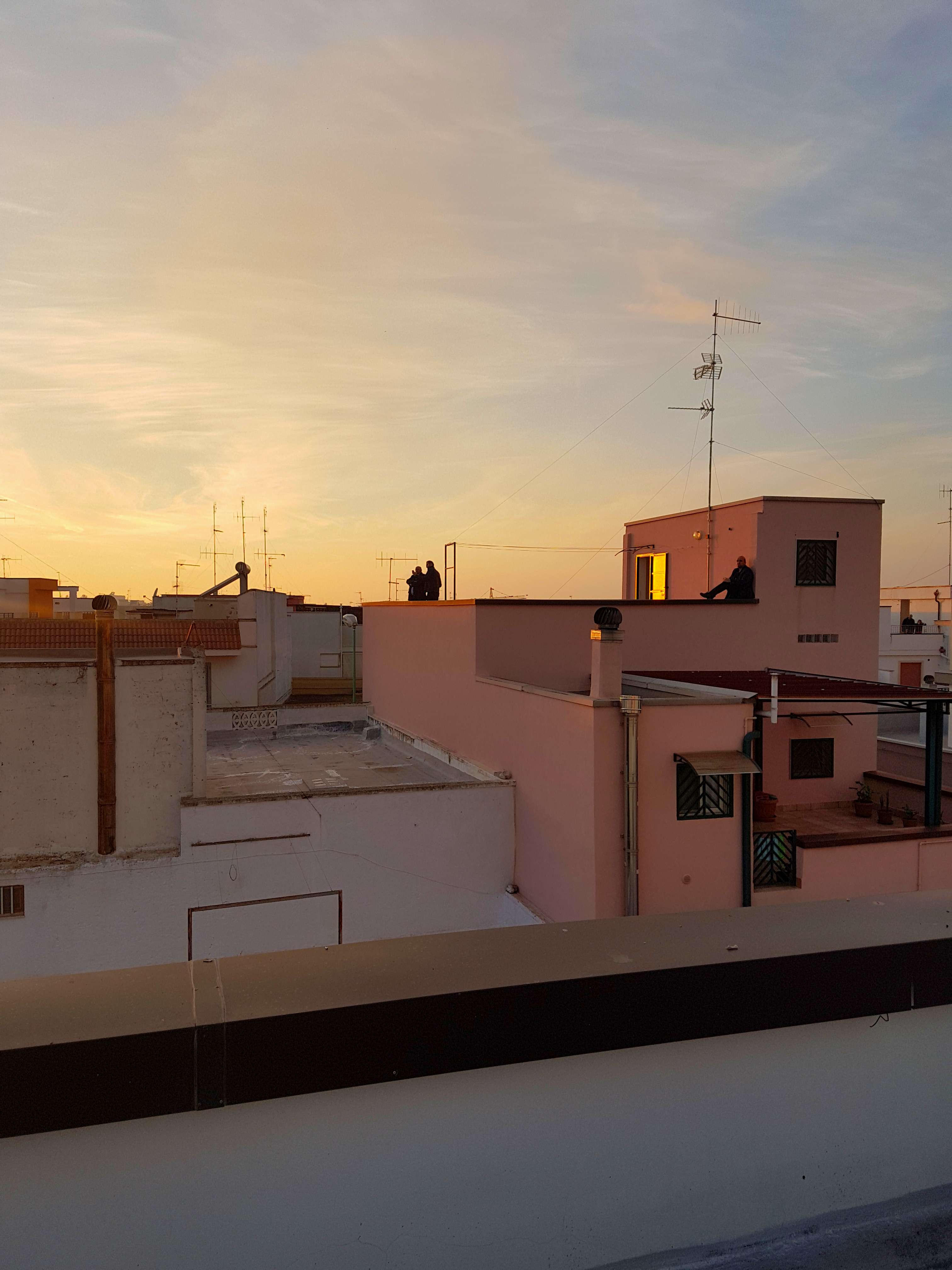 Following the festival, the famous lights line the streets for another week or so, as a proud reminder of the spectacular party held in honour of San Trifone, one of the best things to do in Puglia.

Exploring the area: some tips

While visiting Adelfia, don’t forget to explore other gorgeous towns and villages in the area. Many of the characteristic white towns of Puglia are a mix of marine brightness and medieval detail, with granite piazzas that open to the sky and olive trees planted on every corner. 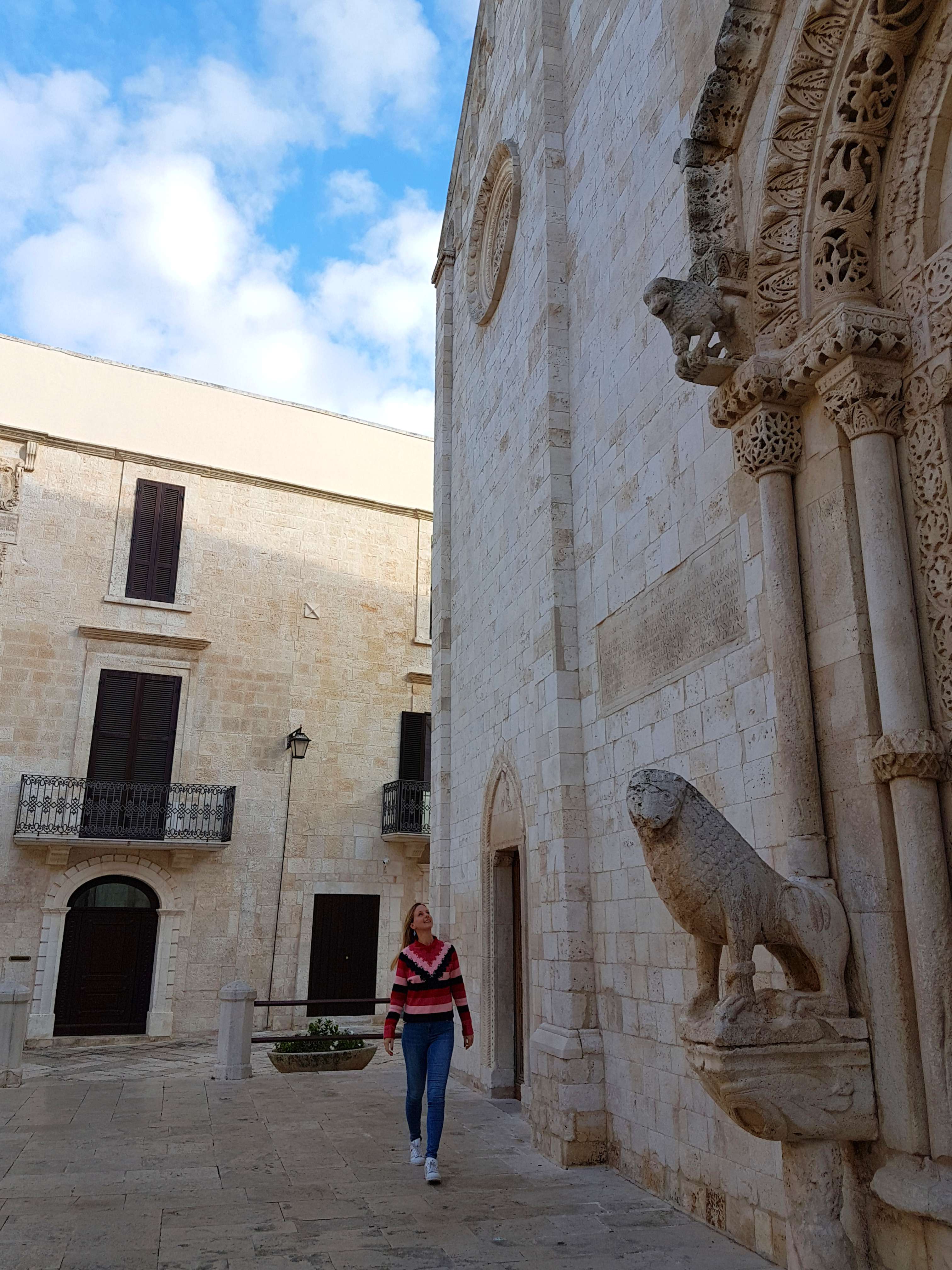 Conversano is an ancient town near Bari in Puglia which has been settled since the Iron Age. These days, it’s a picture perfect comune of whitewashed homes and medieval relics, with a penchant for a warm welcome and a knack for hospitality.

Looking for the best things to do in Conversano? Never fear, the top ten things are right here.

We stayed at Corte Altavilla, which provides charming accommodation in a stone-built four-star boutique hotel in the heart of Conversano. Featuring a rooftop restaurant, the hotel is also distinguished by a full-service spa with a Roman bath. Get ready to cosy up in its magical, white-washed bedrooms with exposed beams, reflecting the traditional architecture of the ancient town, any time of year. 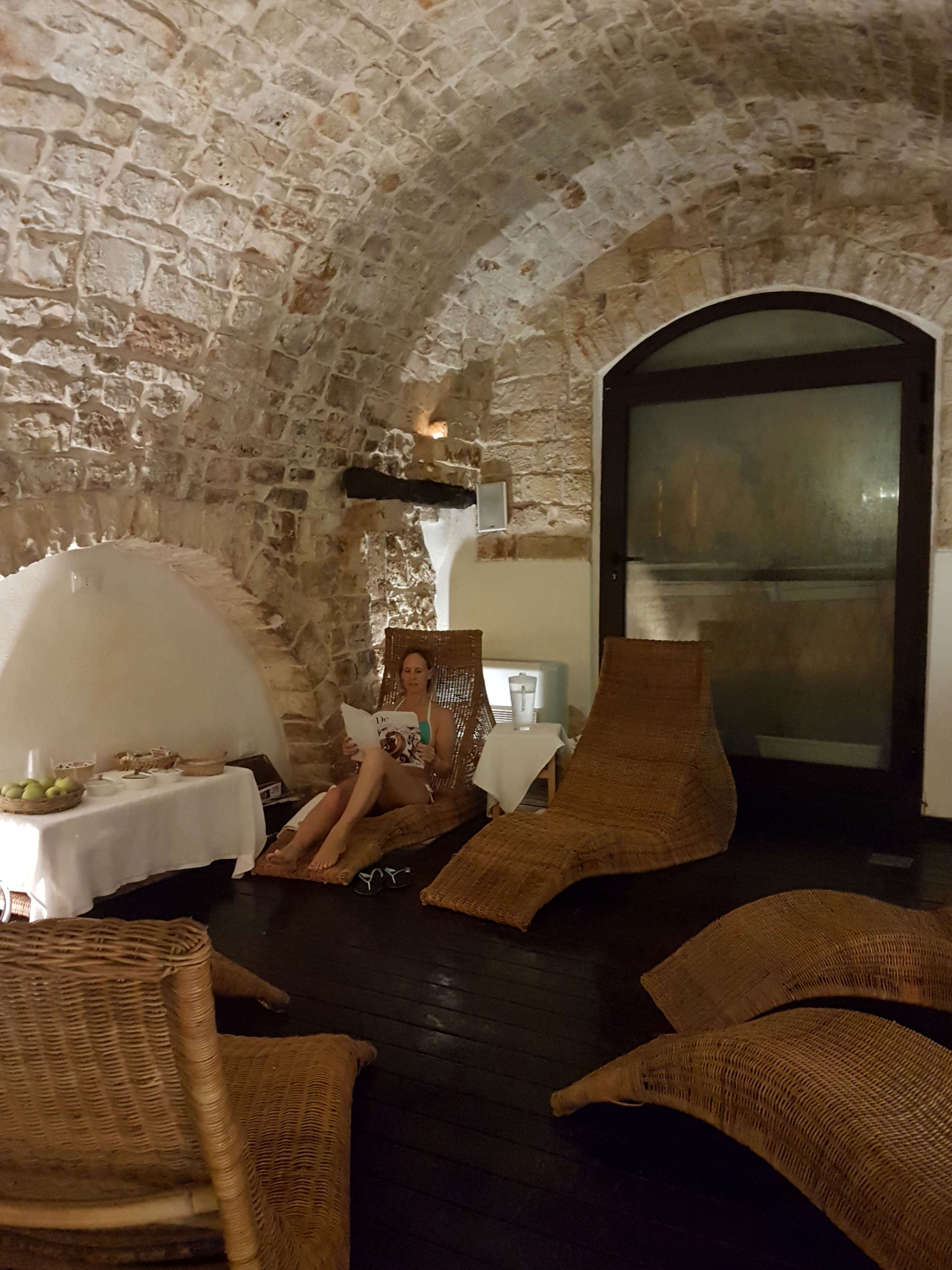 The full-service spa at hotel Corte Altavilla in Conversano is distinguished by a Roman bath at the heart of the complex, perfect for relaxing at the end of the day.

Babel Lounge Bar is a locals’ favourite in Adelfia, and it’s not surprising. Here we enjoyed local wines from excellent vineyard Cantine Imperatore and a table laid with other local delicacies. Lunch comprised broad bean puree and chicory greens, plus foccaccia, thinly sliced cured ham, knots of mozzarella and oven baked orecchietti with ragu, followed by roast beef. Drop by here, too, for breakfast, coffee, cocktails or a glass of wine any time of day. 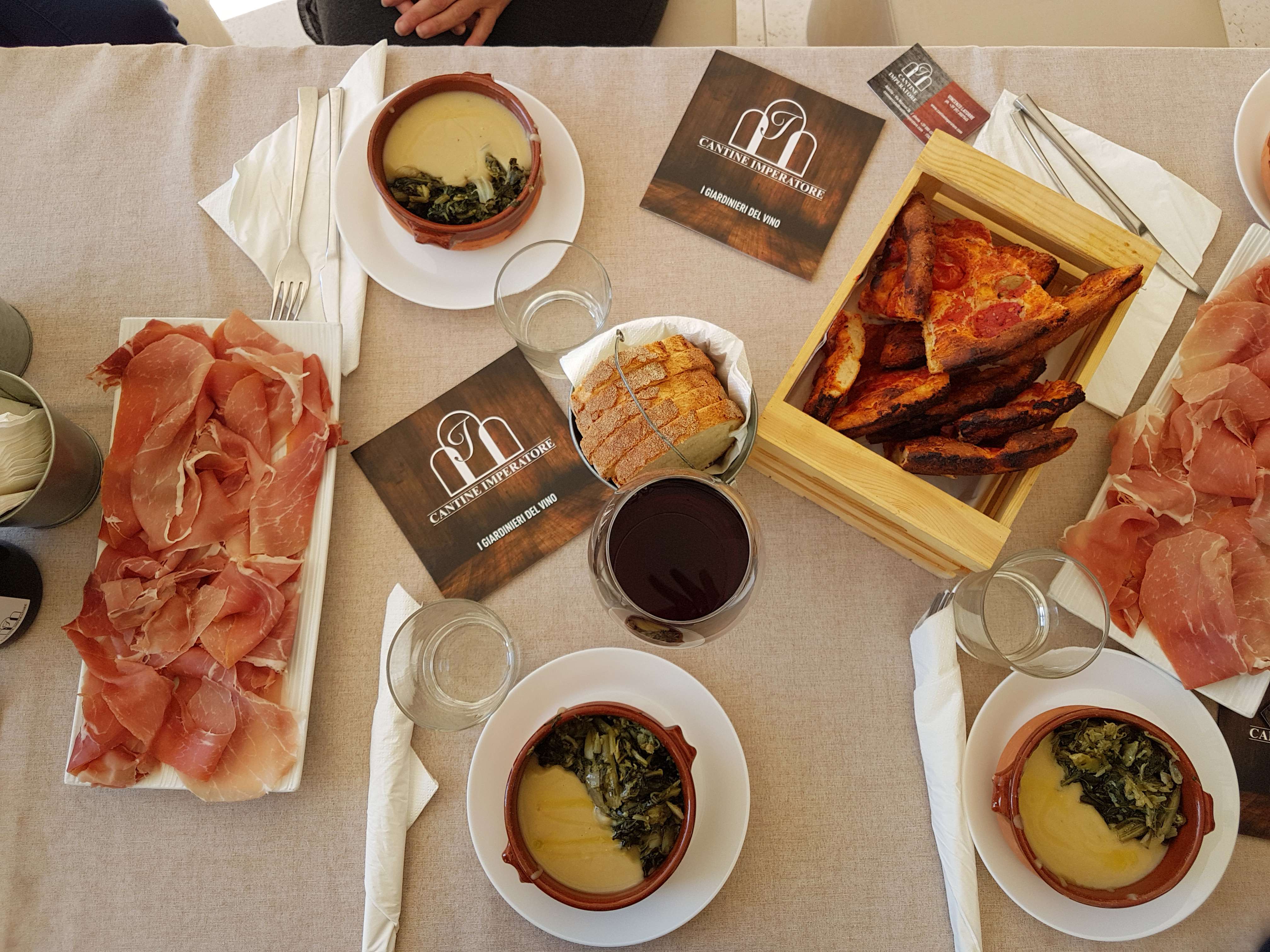 I Fuochi is a typical restaurant in the heart of Adelfia, serving hearty platefuls of local recipes. We enjoyed a veritable feast here, ranging from antipasti dishes featuring the famous local black rice, to pureed broad beans with chicory greens. Tender roast lamb is particularly typical this time of year and is served from the grill at I Fuochi, which is also famous for its pizzas. 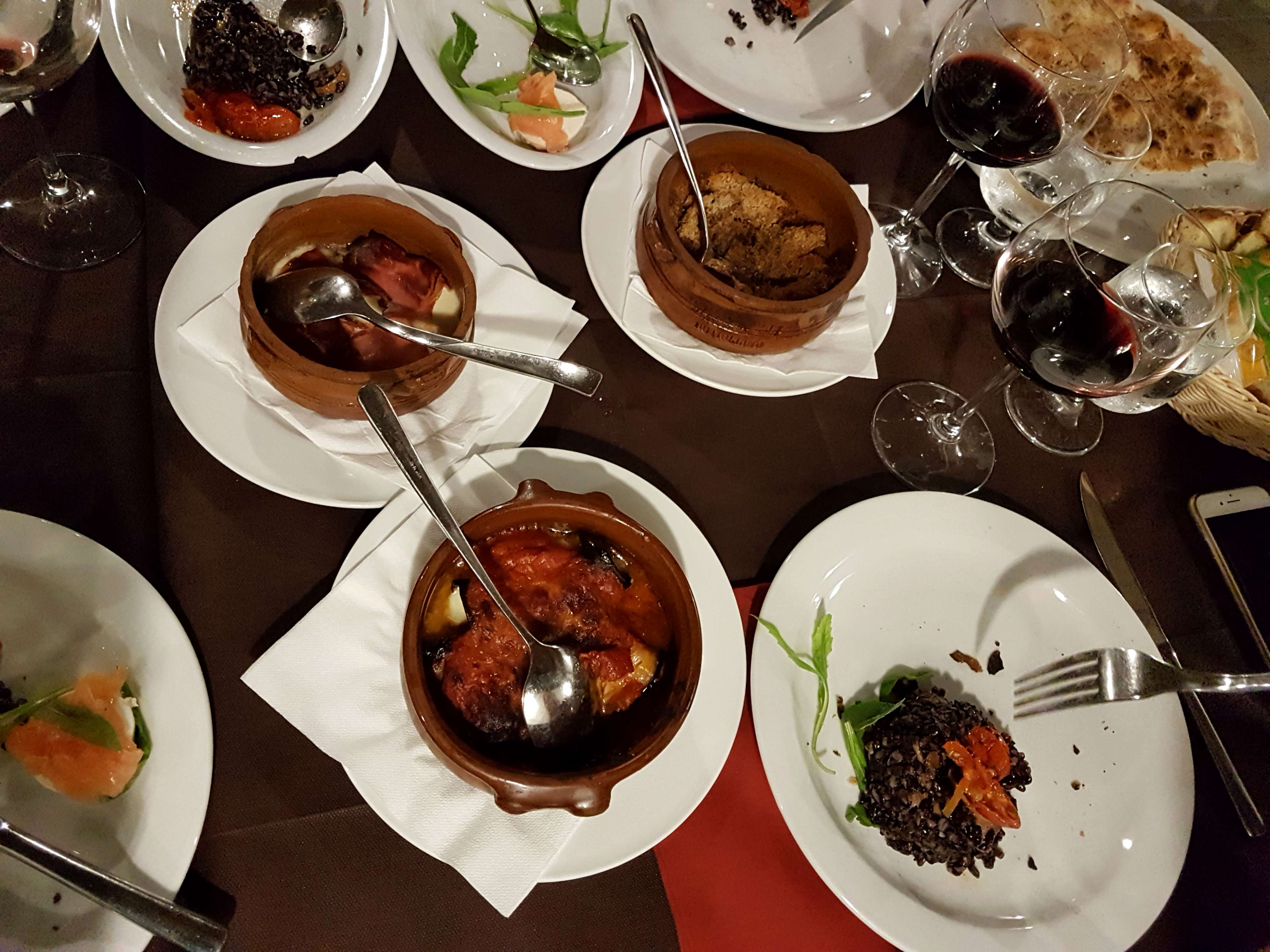 Officina is leading the pack in Adelfia’s evolving restaurant scene. This craft beer pub and restaurant has a vast and mouthwatering menu, distinguished by melting bruschette and hearty burgers, as well as ribs and fries. 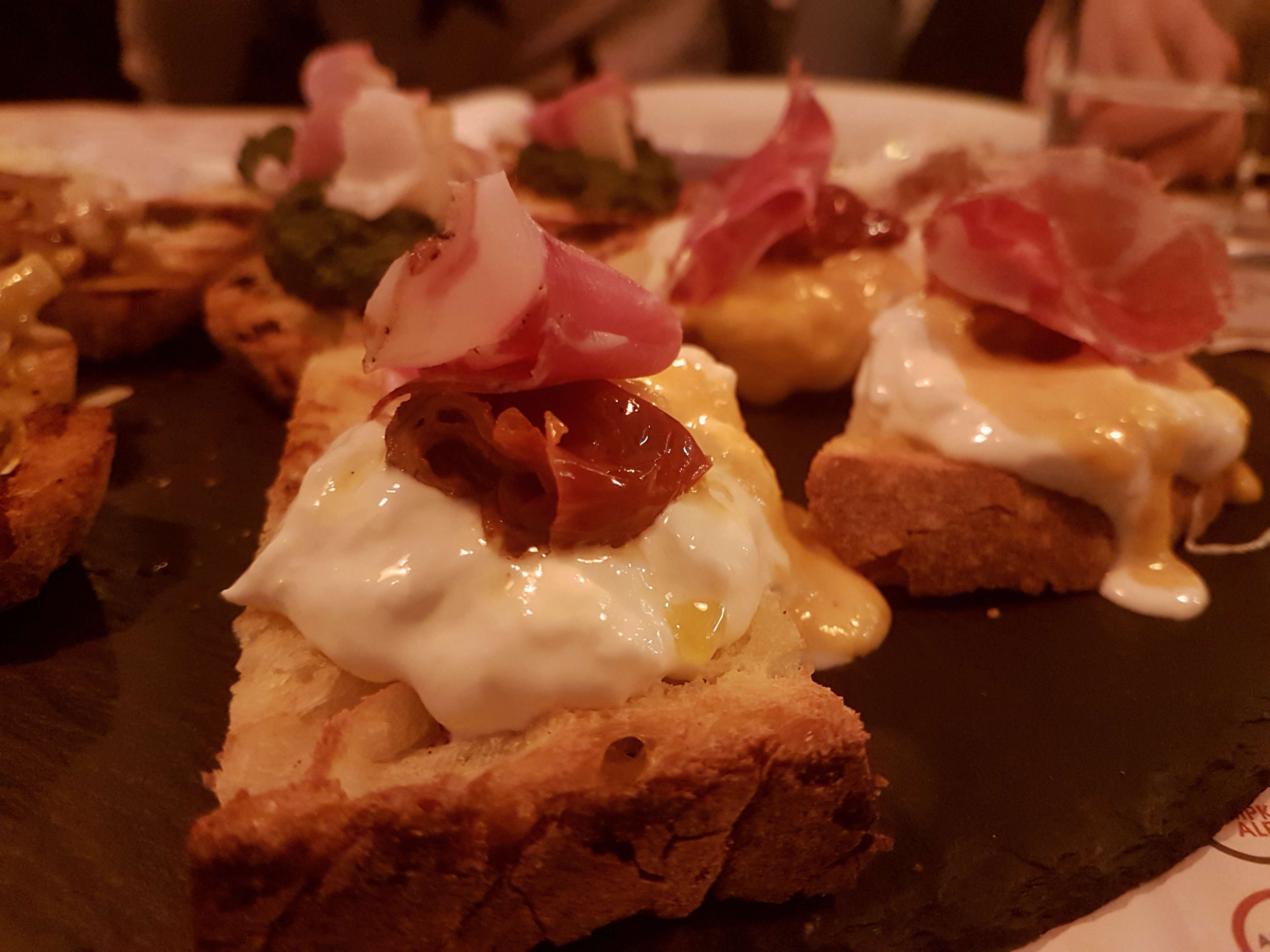 But there’s a place for local food on the menu too, so look out for typical vegetable dishes, hearty soups and grain stews as well as local mouthwatering cakes filled with confectioner’s cream.

Read next: Best things to do in Umbria: try a Gubbio Food Experience