Curious about cemeteries in Rome, or looking for the most interesting Rome cemetery to visit? This Rome cemetery guide rounds up my three favourite Roman cemeteries, all which are distinguished by vastly different purposes, atmospheres, and styles.

The three Rome cemeteries listed in this guide also have their own dedicated posts, in case you’re interested in finding out more about Verano Cemetery, the non-Catholic Cemetery in Rome, and Rome’s Commonwealth Cemetery. But for a quick Rome cemetery guide, read on!

Rome Cemetery guide: the best cemeteries to visit in Rome

I’ve always wondered what the dead think of cemeteries. If you’re in a better place, probably not much. If you’re in a worse place, I imagine you have more pressing matters to deal with.

And of course, if you believe that this life is a kind of one shot experience, you’re probably of the opinion that graveyards exist only for the living, a thought I pondered whilst recently visiting the best cemeteries in Rome.

In that much, we’re in agreement. My sense is that it is families and survivors that need these miniature cities with boxy tombs to keep off the elements, and those stones erected preserving names and dates.

They give the living a destination and a real comfort that they too will have at least a physical, eternal home once they are also dead.

Different cultures have dealt with this need in many different ways, but one common method is to bury bodies side by side in a marked field or piece of hallowed ground where the former living get a little piece of real estate forever (or until their descendants forget to pay the rent).

For those that don’t come to mourn, they can provide a weird insight into human grief, even into fads for fonts, flowery language, art and photography. Some inter the dead with a simple stone left open to the elements. Others try and protect the deceased with curious temples, distinguished by soft furnishings and electric candles that refuse to go out.

If you’re a fan of the morbid narratives found in graveyards then there are three cemeteries in Rome which I would highly recommend visiting. They were all built for quite different purposes and have surprisingly unique atmospheres.

They’re not quite in the historical centre, but if you’ve comfortable at least with the Metro system you won’t have any problems reaching the best of Rome’s cemeteries.

Verano Cemetery is a real city of the dead, and the most ambitious of all the Roman cemeteries. Built, like Roman and fascist cities, on a grid system, if you squint on a sunny day you could be forgiven for mistaking its monumental churches for public offices or libraries.

Verano Cemetery has the eerie silence of Pompeii and leaves you with the sense that everyone’s just popped out for milk. Unlike British cemeteries, inevitably delineated by bumpy lawns and spreading tree roots, the graves here in Verano Cemetery are laid out between tarmacked streets and an occasional bus service even takes mourners round its vast grounds. Expect to find old Roman families buried here and celebrities from the last century: buy a guide for insight or read Cynthia Korzekwa’s fascinating blog to uncover their stories. Definitely one of the best Rome cemeteries.

How to get to Verano Cemetery in Rome: Termini Metro Station + 15 minute bus ride 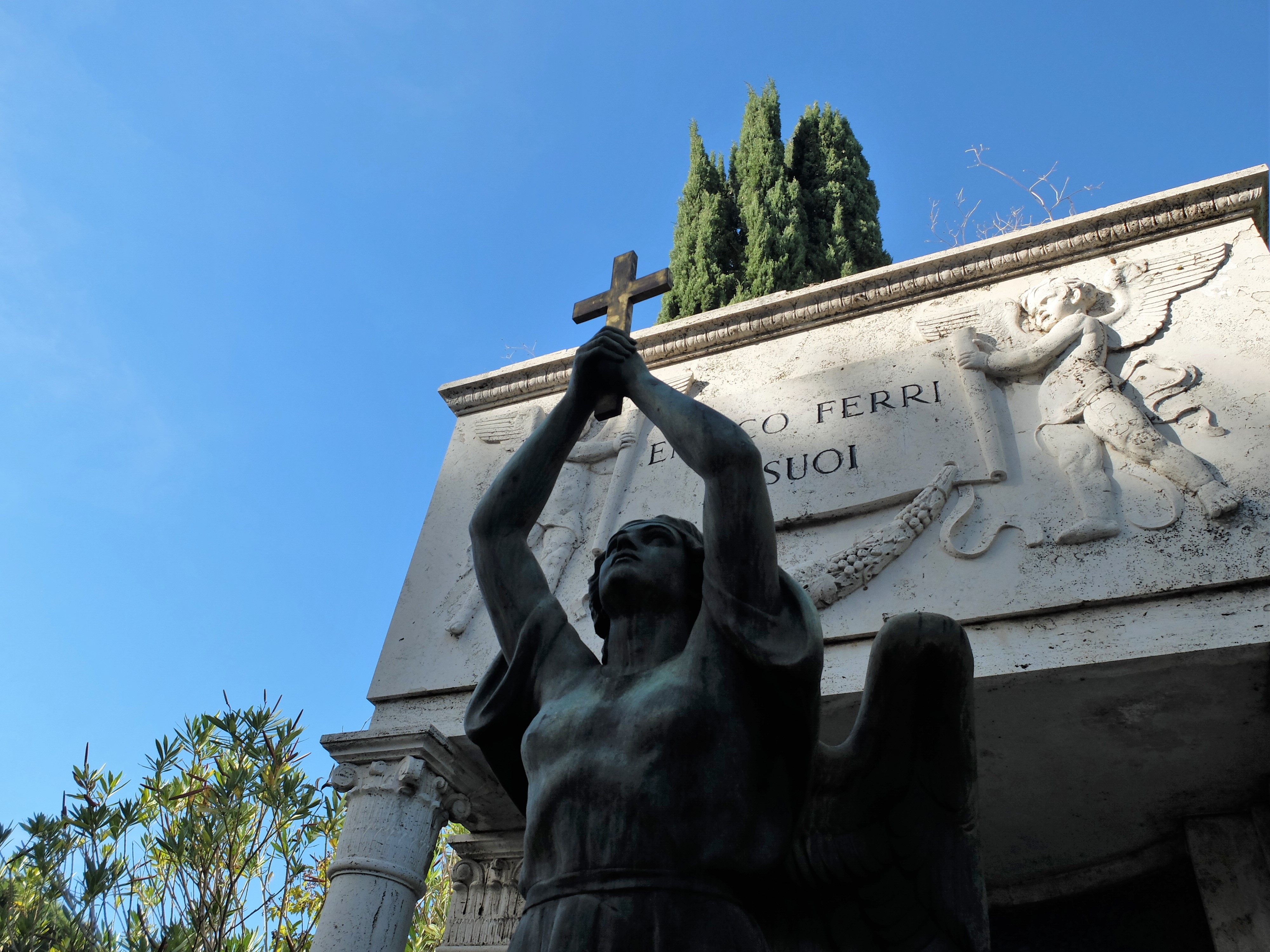 In a city dominated by the Catholic church, the dead of other faiths still need somewhere to go and in Victorian times they decided to round them up in this rather charming cemetery in Testaccio. Who are the non-Catholics? Mostly illustrious Anglicans and Protestants, members of the Orthodox Church and a few famous Italian Communists.

This is often thought of as the foreigners’ cemetery, but expect to find key local non-Catholics such as Antonio Gramsci, a founding father of European Communism, as well as famous overseas artists who breathed their last in Rome: Russian painter Karl Brullov; the son of Goethe; and of course, English poets John Keats and Percy Bysshe Shelley. Say hello to Keats and cuddle a cat from the feline sanctuary which is tolerated in the grounds at this, the sweetest of all of Rome’s cemeteries. It’s also a clear favourite as my favourite Rome cemetery!

How to get to the non-Catholic Cemetery in Rome: Piramide Metro Station + 5 minute walk 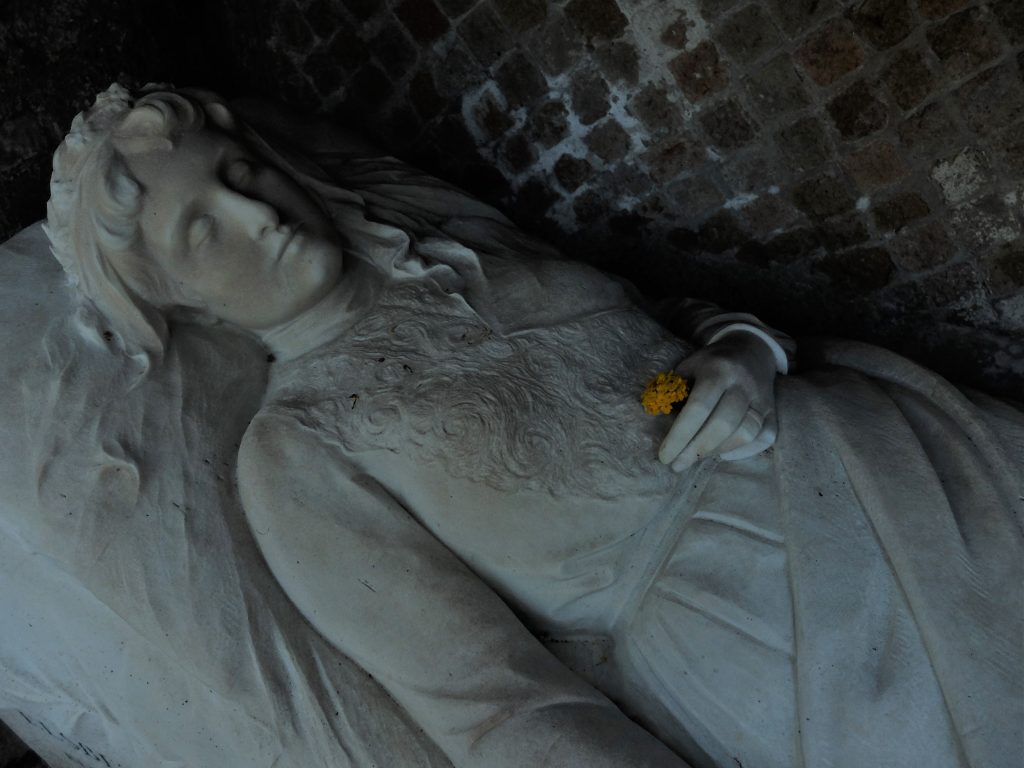 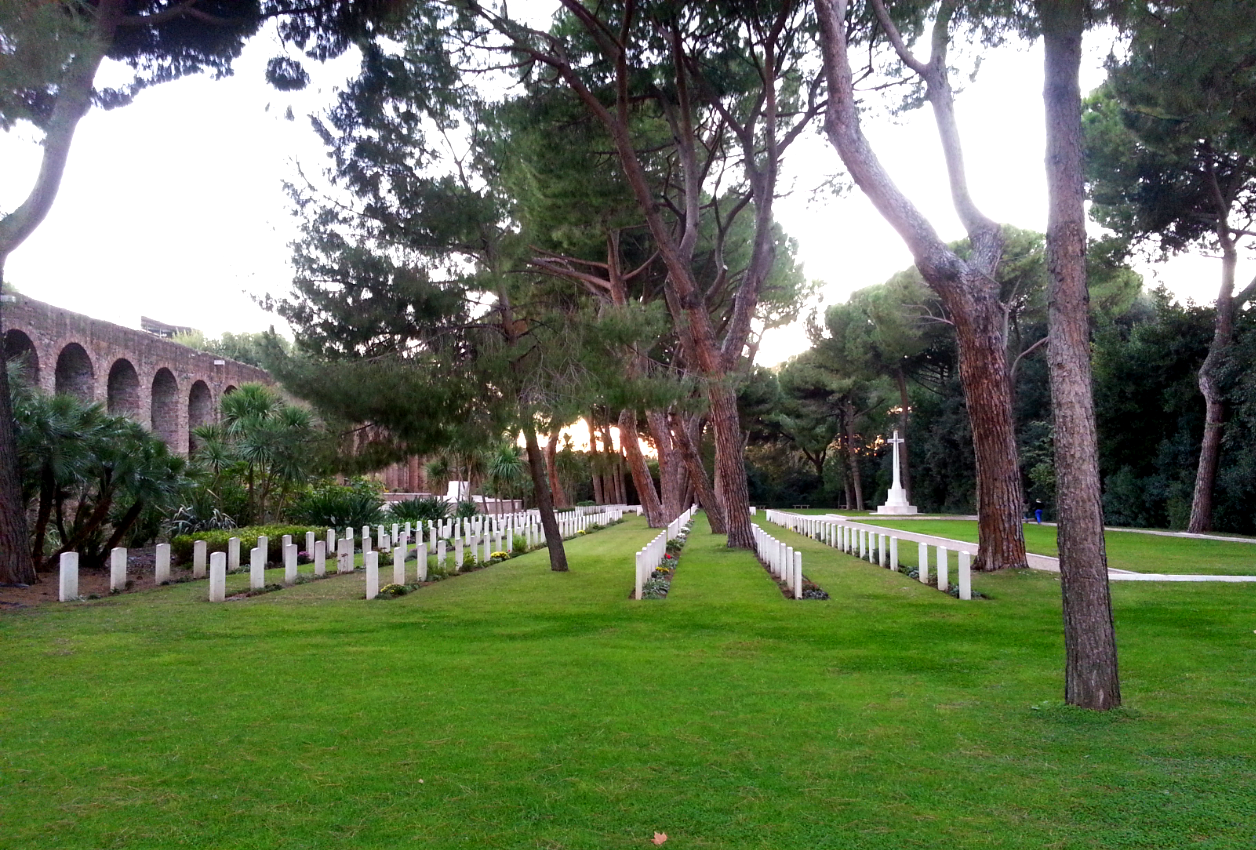 Over the road from the non-Catholic Cemetery, is another graveyard, this one distinguished by identical tombs – Rome’s Commonwealth Cemetery. This Rome cemetery is, as you might guess, a war cemetery, built to commemorate the dead from both the First and Second World wars. 426 soldiers are buried here from the United Kingdom, Canada, Australia, New Zealand, India or South Africa.

Every year, on November 11th, a party from the British Embassy celebrates a simple remembrance service here to ensure they are not forgotten. Of all of the Rome’s cemeteries, this is probably the one I find the most moving, so it definitely makes the list of the best Rome cemeteries. Full story here.

How to get to the Commonwealth Cemetery in Rome: Piramide Metro Station + 7 minute walk

Read next: Exploring autumn’s fruits: the market on Via Porto Fluviale Rome