Doppio Malto in Rome, a new brew restaurant near the Trevi fountain

Doppio Malto, a new brew restaurant near the Trevi fountain in Rome, has added an extra dimension to a touristy part of the city which sometimes disappoints in terms of dining choices.

The restaurant represents the ninth Doppio Malto brew-pub in Italy, and if you’re wondering why this brewery has taken so long to reach Rome, the main reason is because Doppio Malto was born in northern Italy, near lake Como. Accordingly, up until now, for the full brew-restaurant experience, you’ve had to go to Erba, Scalo Milano, Verona, Dormelletto-Novara, Marcon-Venezia, Erbusco-Brescia, Bologna or Casnate-Como.

This craft-beer house, which planned brew-restaurant spaces with dining options from the start of the initiative, was launched 13 years ago by master brewer Alessandro Campanini, and has grown as a brand thanks to a partnership with entreprenuer Giovanni Porcu.

Now, they’re showing their commercial ambitions with a significant, 600 m2 venue right behind the Trevi fountain, an area which is currently distinguished by overpriced restaurants and hotels thronging with tourists. 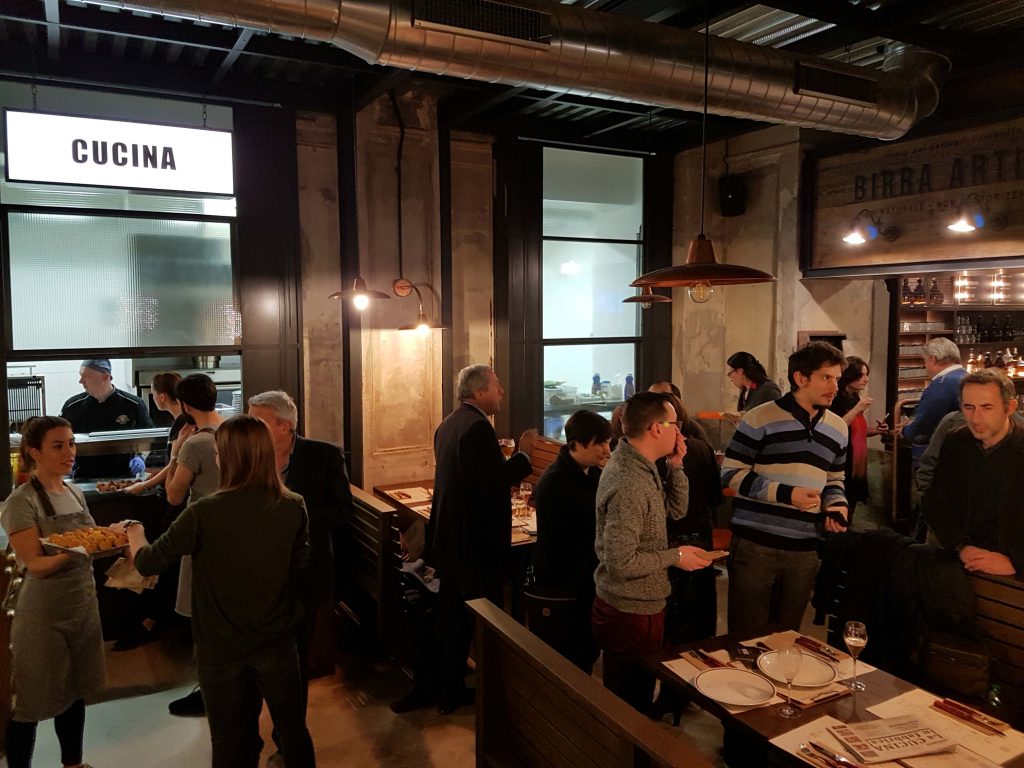 The handsome space of Doppio Malto Rome picks up on the international restaurant trend of creating oversized, post-industrial environments, combined with a nod to the white tiles and monochrome signs associated with traditional butchers or trattorias in Italy. Exposed pipes, rust coloured tables and walls and a copper lined bar create a warm interior with just a hint of steampunk.

What about the food and drink? Well, as many of you will know, I’m a keen fan of craft beer so my priority here was checking out the tap list. With 12 Doppio Malto branded beers available, you would definitely hope to find something for everyone. While my favourite beer was probably the Stone Ale, a golden, double-malt ale running in at 6.5% alcohol, my observation was on the whole that there wasn’t a huge amount of choice for drinkers, like me, who prefer a a classic IPA or some of the clean, Franconia beer styles.

There’s a tendency on the Doppio Malto house list for beers with rich caramel aromas, recalling some Belgian-style beers, strong Imperials or triple malts, plus beers with added flavours such as cocoa and ginger for those who like beer with an extra taste dimension. However, the quality on the whole is good and being all 12 on tap, they are served in optimum conditions. 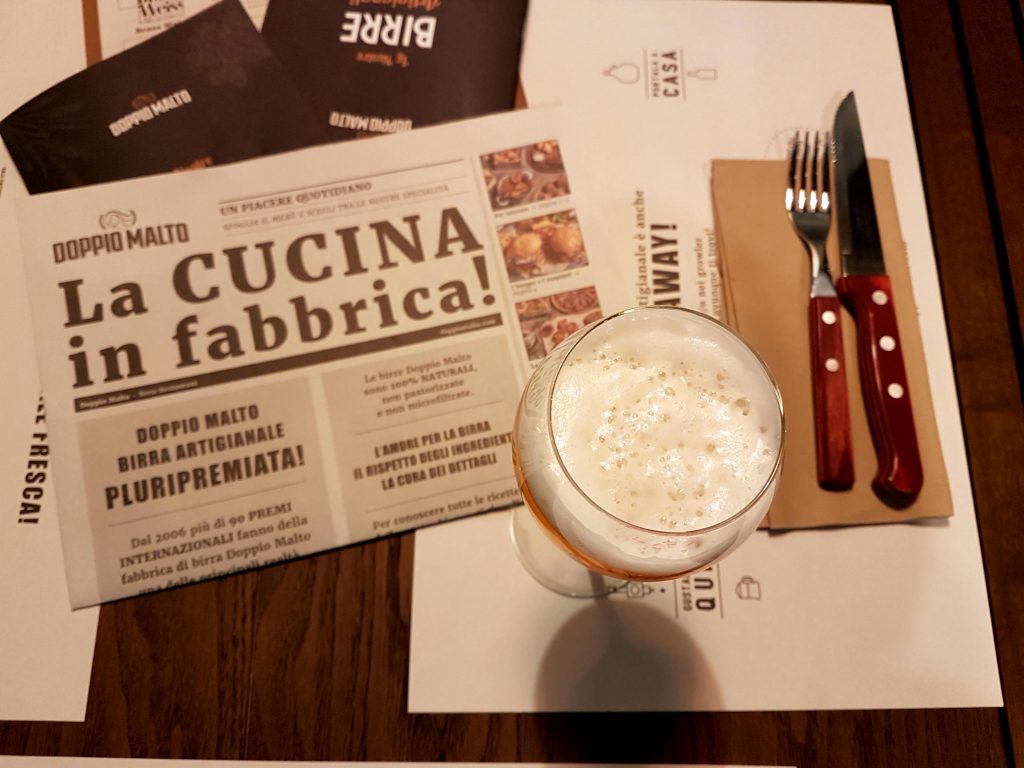 Passing to the food, the dining experience at Doppio Malto Rome was excellent and comes highly recommended. We started with some fried goodies, including chicken wings (€5,40), sweet onion rings (€4.60), deep fried potato balls stuffed with gorgonzola (€4.80), mini arancini (€4.80), and potato wedges with bacon and pecorino cream (€4.20). You can also order a selection of fried goodies for two at a reasonable €10.60.

Other antipasti possibilities include topped focaccia bread (resembling a pizza in this case, priced between €6 and €8), as well as a handsome menu of hams, cheeses, salamis and local delicacies such as porchetta, for those of you who like to start with a charcuterie sharing option – here priced between €9 and €12 per small platter. 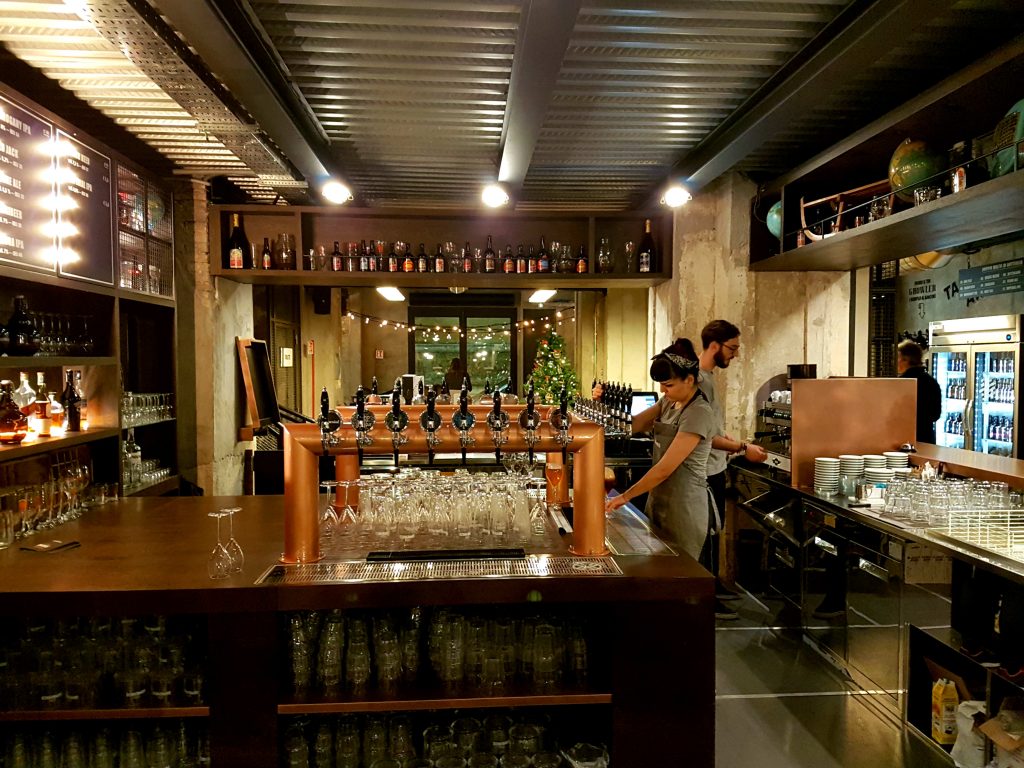 Things got really interesting when we passed on to the meat-dominated second course menu. Doppio Malto Rome specialises is cooking the very best capons, small roast chickens with a lot of flavour. The beer-infused capon (galletto alla birra) is tender to the point of ridiculousness, with hints of crispy skin and a succulent interior. Served with oven cooked potato wedges, this deserves that you bring a hearty appetite to the table.

There’s also an ample burger list, which I didn’t try this time, but which offers a good selection for all tastes, including 6 beefburger variants – with toppings ranging from bacon and cheddar to speck, coppa or goats cheese – plus a chicken burger, a porchetta burger, a pulled pork sandwich and a vegetarian burger. Prices range from about €8 to €12. 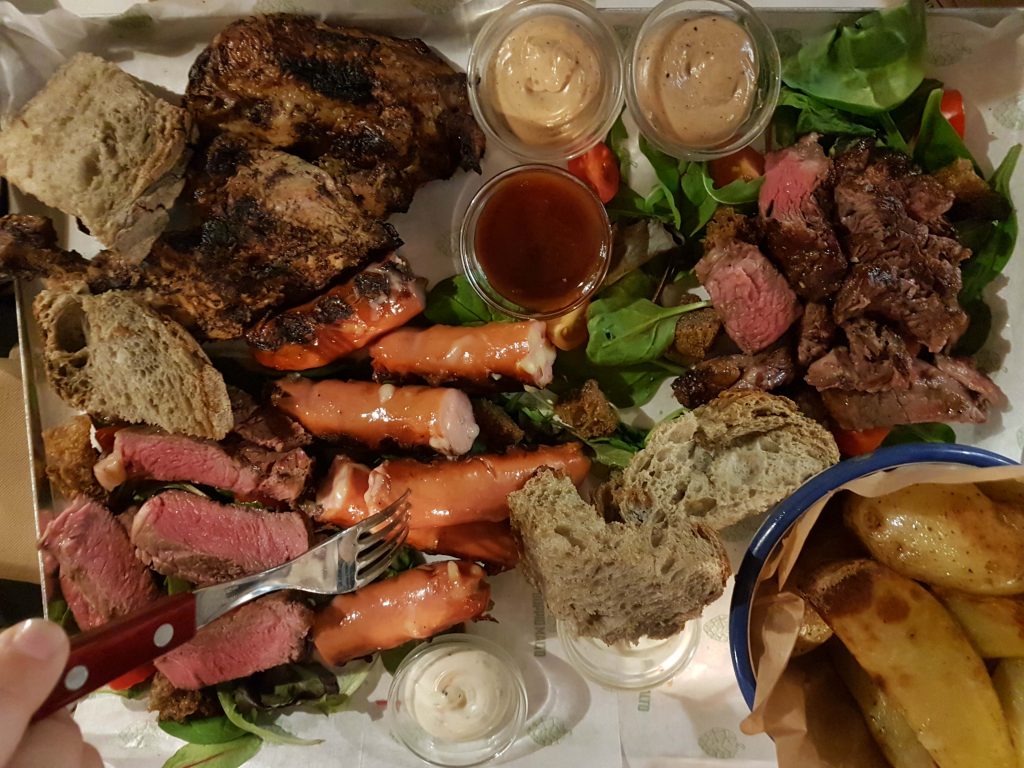 If you’re feeling even more carnivorous, a handsome grill menu offers everything from fillet to grilled German sausages and chicken wraps, with the prices ranging from €8 to €18 for items on this section of the menu. You can also order a large mixed grill for two, priced at €15.20 per person.

There’s a salad menu too to bring a few more vegetables to the table, as well as potato and grilled vegetable side dishes.

Amongst the desserts on offer at Doppio Malto Rome, birramisu (geddit?) is a beer-infused take on tiramisu – the name is adorable, and while the dessert was tasty, it made me realise why the classic ingredients of coffee-infused savoiardi biscuits work so well – the bitterness of the coffee is hard to beat.

If you end up visiting with children in tow, the under 12s have a dedicated menu with items priced at a very reasonable €3. Of course, you’re also not obliged to merely drink beer – expect a choice of wine and soft drinks too.

Coming soon to the Roman brew-restaurant, expect cocktails mixed from beer, echoing a new, international drinks trend. Meanwhile, the Doppio Malto empire is planning another eight restaurant openings across Italy in the first half of 2018 plus a significant expansion of the original production facilities.

It’s going to be a great year for them and I can tell you now that the Trevi fountain restaurant will doubtlessly be a huge success. Cheers!

Read next: (VIDEO) The best craft beer bars in Rome