(VIDEO) How to see the rose petal shower in the Pantheon, Rome, Pentecost

How to see the rose petal shower in the Pantheon, Rome, at Pentecost

Pentecost is one of Christianity’s most esoteric festivals. Originally an ancient Hebrew feast, taking its name from the ancient Greek meaning “the fiftieth [day]”, it arrives 49 days after Easter, to celebrate the descent of the Holy Spirit upon the Apostles and other followers of Christ, as described in the Book of Acts 2: 1-31.

1 And when the day of Pentecost was fully come, they were all with one accord in one place. 2 And suddenly there came a sound from heaven as of a rushing mighty wind, and it filled all the house where they were sitting. 3 And there appeared unto them cloven tongues like as of fire, and it sat upon each of them. 4 And they were all filled with the Holy Ghost, and began to speak with other tongues, as the Spirit gave them utterance.

This striking image has inspired artists over the centuries, to try and capture the extraordinary idea of the tongues of fire that sit upon each disciple. It’s why bishops wear a curious flame-shaped hat, called a mitre; it inflames T.S. Eliot’s Little Gidding, in the Four Quartets; it’s the backdrop for Philip Larkin’s gloriously prosaic poem The Whitsun Weddings (in England, Pentecost was once better known as White Sunday, or Whitsun). 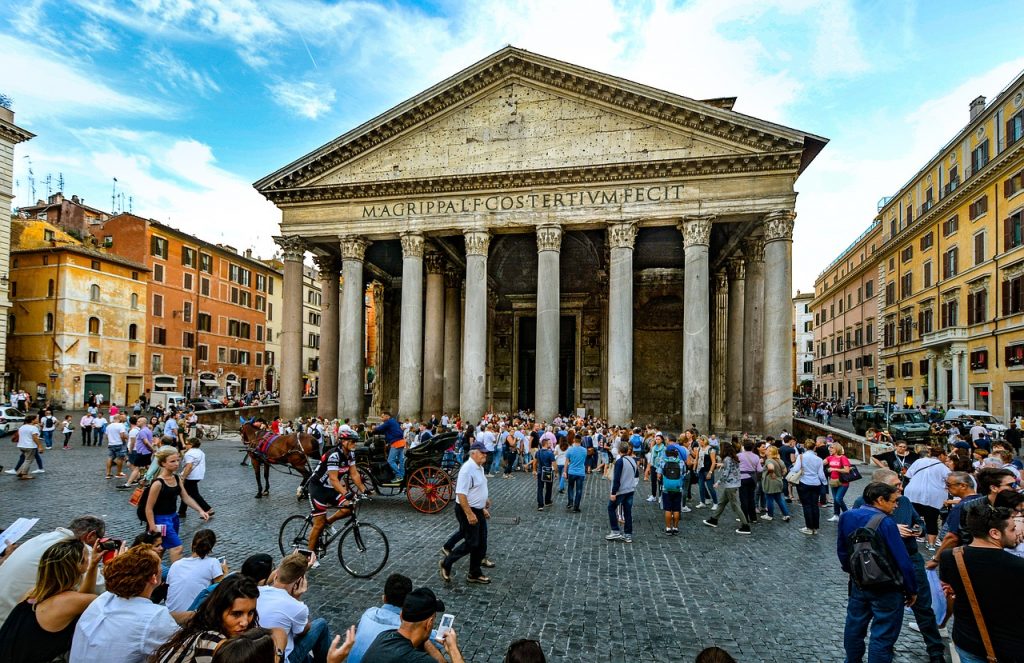 Rose petals at the Pantheon in Rome: how to take part

All this is important to understand the extraordinary reason why a rose petal shower takes place in the Pantheon every year to celebrate Pentecost in Rome. Each year, hundreds of worshippers attend a rather special Sunday morning service featuring rose petals at the Pantheon, a former pagan temple dedicated to all gods, which has been functioning as a Christian church since 609 AD, and is called today S. Maria ad Martyres, or informally, Santa Maria Rotonda.

At Pentecost, the Church takes advantage of the building’s unique oculus, the hole in its ceiling, to send a shower of ‘tongues of flame’ down on worshippers’ heads. Of course, it’s not fire but red rose petals which descend – la pioggia delle rose – and witnessing the rose petal shower in the Pantheon is quite a sight.

Is the rose petals at the Pantheon mass free to enter?

Last year I was determined to see the rose petal shower in the Pantheon – and, if I could – sit down. Let my experience suggest what to do (and definitely not what to do). I arrived at 8.10: the queue outside the still-closed doors was modest. At that moment, I was assailed by a very real temptation: breakfast at nearby cult coffee bar Sant’Eustachio Il Caffè.

I calculated the number of people ahead of me, and I thought about Sant’Eustachio’s extraordinary coffee and its gloriously crisp aragostine: amber flaky pastry on the outside, resembling the carapace of a lobster, filled with ricotta cream. I ceded my spot in the queue and went for breakfast. When I came back, some ten minutes later, the queue had more than doubled. Nevertheless, when the doors opened at 9, I was just a hair’s breadth from getting a seat (I tried to be decorous and not run. Also, some of those nuns can really shift).

The service before the rose petal shower in the Pantheon starts around 10.30 and lasts until 11.50 or so. Once the service starts, no more guests are permitted to enter.

At midday, representatives from Rome’s fire-brigade throw sackfuls of rose petals down through the oculus into the Pantheon and everyone catches their breath. If you do manage to get a seat, it’s the perfect Sunday morning experience in Rome. If you find yourself standing for more than three hours, the magic fades just a little.

But everyone should see it once in their lifetime, to catch a handful of Pantheon rose petals or take away one of the roses that are freely shared in this rather lovely moment of worship. Whether Christian or not, the Pantheon rose petal shower is a moment that will stay with you for a long time.