Rome has a great craft beer scene and I was spoilt for choice selecting the 8 best craft beer bars in Rome for this article. From essential ‘hole in the wall’ dive bars in the city centre, to laid back drinking lounges and beer gardens a little further out, Rome has a great range of pubs focusing on quality artisan ales, mostly sourced from Italy, Belgium, Germany, the UK and the Nordics – with a few American and Australian beers to boot.

Not every pub in Rome serves craft beer, so you’ll need to bookmark this page if you plan to focus on the best craft beer bars in Rome when you visit the capital. Only a couple of the best craft beer bars in Rome are in the historic centre, but armed with a decent Metro map, you can reach any of the following pubs in less than 30 minutes from the city’s heart. As most of them serve food as well, why not explore the suburbs and make a night of it?

While you might associate Italy with wine making and a superb food culture, the country’s craft beer industry has grown immensely over the last decade to become one of the best in Europe. That’s why I think you shouldn’t miss this quintessentially Italian experience when you visit Rome.

Click below for the complete video exploring the best craft beer bars in Rome, followed by a list of all the pubs in Rome I would recommend, with handy links and some details about the types of beer you can expect to find.

This tiny watering hole in a cobbled back street in Trastevere marked the beginning of a quiet revolution when it opened in 2001 as the first real craft beer bar in Rome. Even today,  it mostly attracts locals, and mostly hordes of 20-something Roman men who loiter in front of the doorway to smoke while catching a Serie A football match on the TV screens. There’s also the odd well-informed connoisseur of artisan ales, and I’m delighted to say, plenty more female craft beer aficionados drinking here in the last few years.

The brain-child of Manuele Colonna, a pony-tailed publican whose other brilliant inventions have included Ma Che’s (almost) annual beer cruise to Barcelona,  it’s constantly evolving tap-list – comprising mostly Italian, Belgian and German beers – never fails to impress. The front bar has about 10 taps and four pumps for craft ale, changing weekly, plus seating for about 12 drinkers. The small, air-conditioned back room seats another 15 or so punters. Plenty more stand round the door on warm days and evenings and crowd into the bar when it gets busy. The atmosphere is very chilled – there’s never any trouble, and female punters are left to their own devices in a courteous and non-sleazy environment.  Expect  a good range of IPAs, APAs, saisons, sessions, plus some interesting stouts, sours and smoked ales. There’s also a beer fridge with some rare bottled ales.

It’s probably still my favourite craft beer bar in Rome, despite all the fancy alternatives, and a pub I would happily drink alone in as a woman. It’s open from 11am all year round except Christmas Day, making it an essential and curiously reassuring fixture in the Roman craft beer scene. Throughout the year, Ma Che hosts occasional themed nights – such as Birre sotto l’Albero – a winter-focused drinking weekend in mid-December – as well as occasionally rolling out a couple of barrels of a rare Cantillon ale or special guest beer from the US or Germany. They also sponsor a couple of important local beer festivals including EurHop and Frankenfest. Check the website or Facebook page for details and don’t miss this place if you want to try one of the best craft beer bars in Rome. 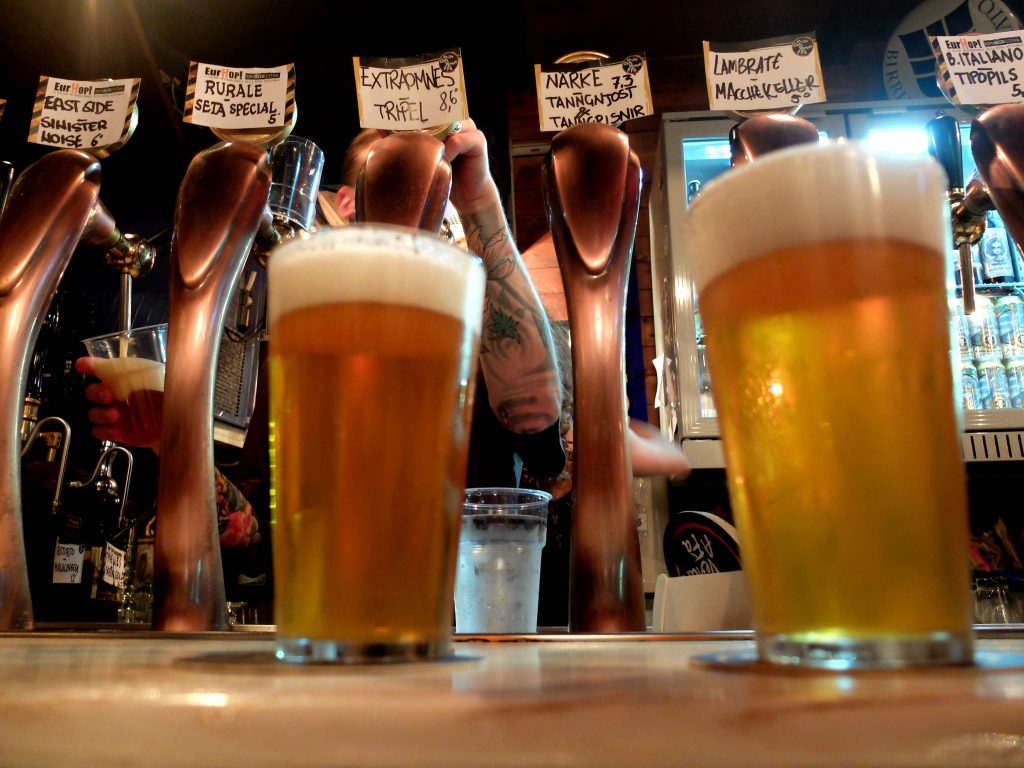 A craft-beer connoisseur’s dream in the heart of Trastevere, this well-stocked long bar is the sister venue of legendary beer pub Ma Che Siete Venuti a Fa’ across the road. Gourmet burgers and light bites are served with some of the best imported artisan brews from across Europe and the States, as well as gourmet Neapolitan (deep crust) pizzas. Hand-cooked chips and a good range of fried bites complete the tasty and well-priced menu. The tap list is similar to Ma Che for obvious reasons although features nearly three times as many ales with 36 taps in continuous rotation. Sit in the front room at the long bar which seats nearly 20 people – you can often get a spot here without booking, particularly early on – or reserve a table in the back room or the small front yard to dine. Open seven days a week from noon, except Tuesdays and Wednesdays when it only opens in the evenings. Definitely one of the best craft beer bars in Rome.

While the Baladin Brewery – one of Italy’s premier craft beer houses and brainchild of Teo Musso –  has been around since 1996, its dedicated Roman pub and restaurant Open Baladin launched in September 2009. Located just a few minutes from Campo de’ Fiori, it rapidly became a hit due to its glamorous, American-bar style wall of beer and incredible selection of Italian beers. With 40 Italian beers on tap plus a selection of international beers – particularly Belgian and German ales – this cavernous venue can seat hundreds of punters in the evening due to its maze of rooms.

The menu features burgers made with bread from local Roman pizza legend Gabriele Bonci and are amongst the best in the capital. While you can almost always get a seat at the bar in quiet periods, you really need to book if you want a table. The staff clearly have a tricky job to do but I have been turned away in no uncertain terms on frequent occasions without a reservation, so bear that in mind. There’s a bouncer here as well to control the large influx of punters in the evening and make sure people behave in the street. The vibe isn’t as laid back as Ma Che or Bir & Fud, but it’s a very valid alternative and the burgers are probably better than Bir & Fud. Also look out for occasional theme nights, including beer tastings, at what is one of the best craft beer bars in Rome. Open every day from noon until 2 am. The beer range is vast, so whether you’re after an APA, IPA or pilsner, stout, bitter or barley wine, there’s something for everyone. 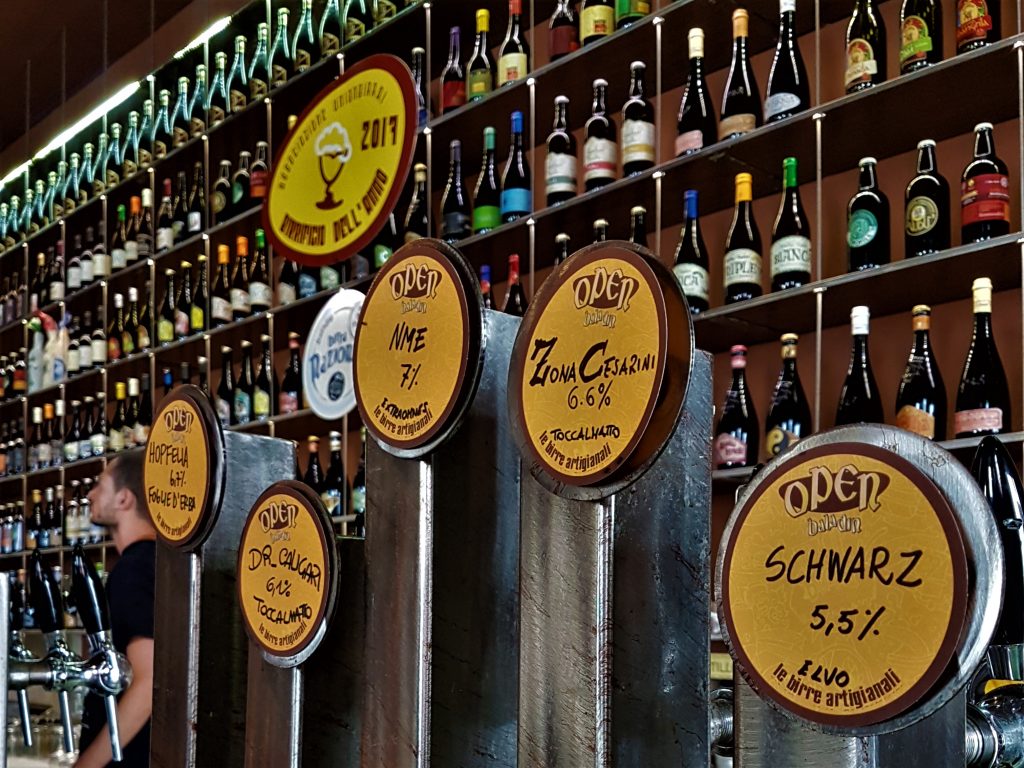 If you want a real beer garden, you have to get out of the centre of Rome. Ninkasi Craft Beer House is a relatively new opening in Pigneto, an alternative district east of the city which is definitely worth checking out for good value food and alternative bars and shops. With a large, wood-lined bar in the American style, plus a German-style beer garden, and loads of seating inside, this pleasant pub has 27 ales on tap – including a selection of commercial beers – and also serves food. Courting an international vibe, expect classics from the craft beer world including Sierra Nevada and Italian brewers such as ECB and Lariano mixed in with the likes of Andechs, Augustiner and Chimay. If the craft beer selection is unlikely to blow you away, come for the full bar with an impressive range of spirits, the enormous menu featuring pretty good bar and trattoria food, and basically THAT garden. There’s live music on selected nights, vinyl nights, ‘meet the brewer’ nights, plus themed parties. It’s off a main road but the garden is pleasant, shady and gated, so ideal for families too. Closed Mondays. 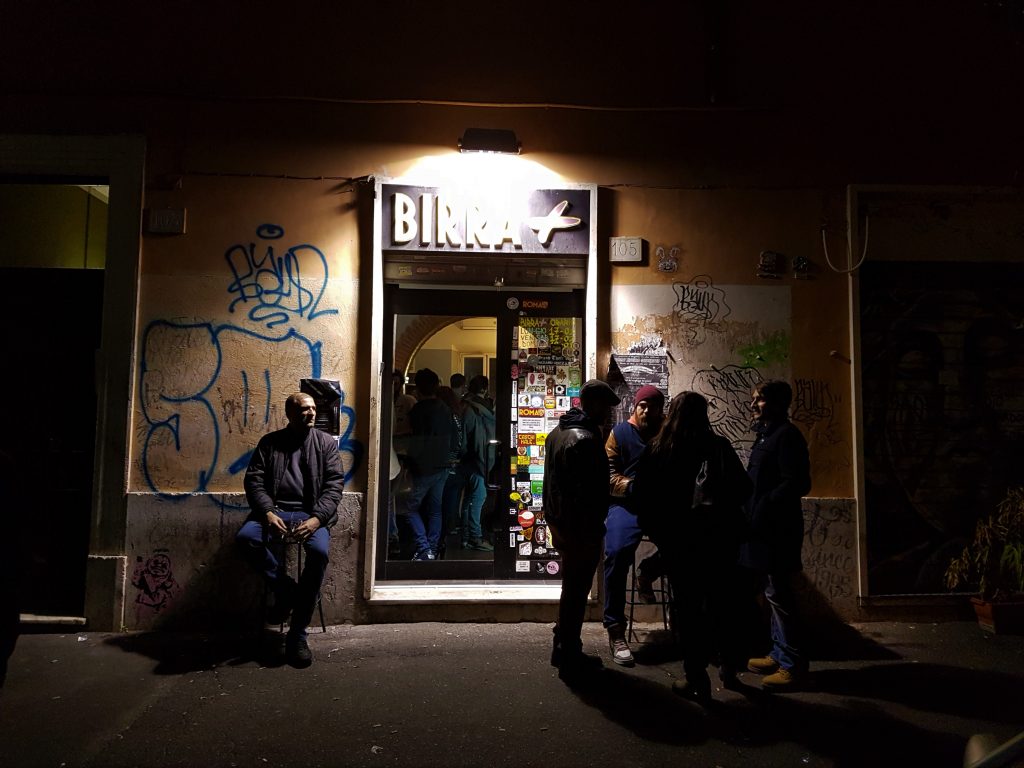 My favourite craft beer bar in Pigneto, this is another simple, stripped back bar selling craft beer and selected whiskies in straightforward surroundings. A colourful board shows the daily and weekly offerings, with a few special offers thrown in for good luck. The focus is on Italian craft beers, with no brewery too small. You’re know you’re in a serious bar when local brewers hang out there, and it’s a great spot to try some micro-brews from the Roman and Italian scene before they get too famous. Expect a good selection of IPAs, APAs, porters and stouts and a bit of everything in between. Definitely one of the best craft beer bars in Rome. Open every day from 5pm (6pm on a Sunday).

Not going to lie, this pub isn’t particularly easy to reach from the centre (although it’s quite straightforward on the metro, just a long journey), but it’s a great choice if you’re staying or living in Rome’s south-east district, between via Tuscolana and Cinecittà. It doesn’t just serve Barley Wine, but look out for some fine examples of this potent brew on tap, as well as excellent local and European craft beers, whisky and rum, plus cheap and tasty homemade bar snacks, all set off by a very friendly, local vibe. It can be fun to get out into a really Roman area if you want to break up your holiday in Rome, and I can guarantee you won’t run into tourists out here! I really wish it was closer to me as I always enjoy an evening here, and would definitely rank it as one of the best craft beer bars in Rome. 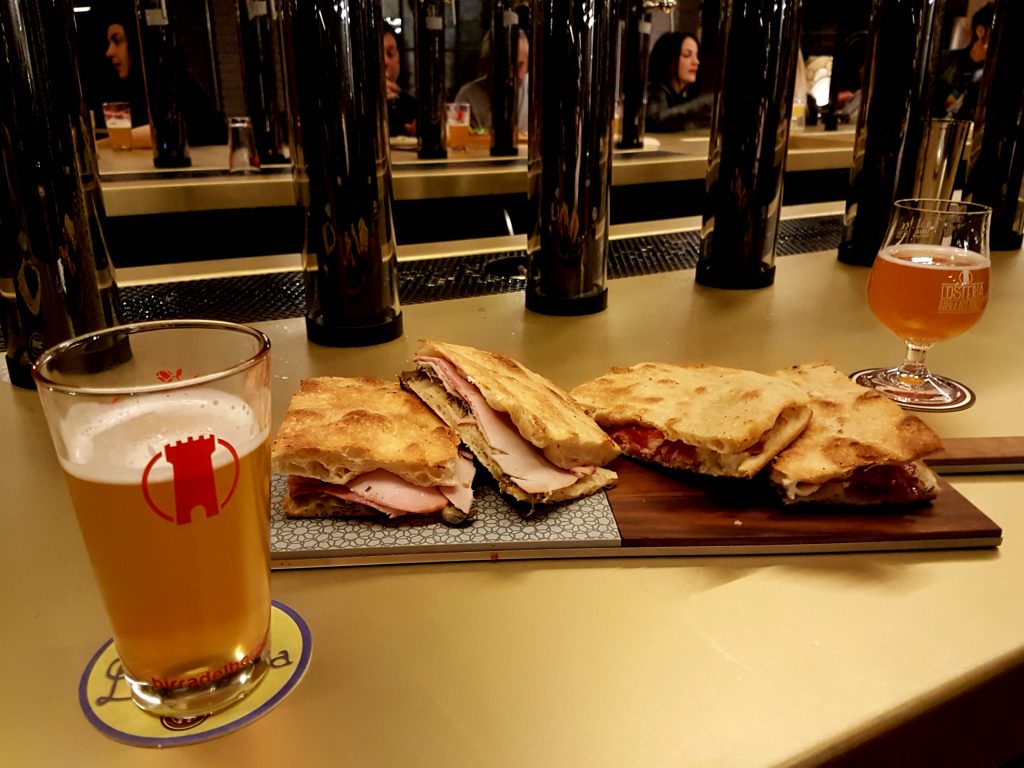 Rome’s newest craft beer bar, lounge and brewpub has ambitions to become its biggest and best, and it’s certainly on the right tracks to being at least one of the best craft beer bars in Rome. Unassuming from the outside, its cavernous inside, broken up into a long bar with seats upon entering, a lounge area with leather sofas, another bar, tables and a private dining area, as well as the beautiful, visible apparatus of the brewpub. Birra del Borgo was one of Italy’s first craft beer breweries and this inner-city brew-pub is a beautiful showcase for its own ales and a selection of craft beers from other Italian craft breweries plus a few from further afield. The food menu is simple but hits the spot with incredible slices of pizza and focaccia-style sandwiches made from the freshest ingredients (overseen by Bonci). Located in Rome’s Prati district, famous for a big shopping street, lawyers studios, middle-class families and for the neighbouring Vatican City, it is nevertheless really easy to reach from the city centre.

Be.Re., a recent offering from Manuele Colonna – the brains behind Ma Che Siete Venuti a Fa and  Bir & Fud – is another  opening in Prati which definitely earns its place as one of the best craft beer bars in Rome. Be.Re combines artisan ales with Trapizzino street food for a straightforward but winning combination. Situated in Prati’s piazza Risorgimento, just minutes from the Vatican, it’s already a  firm favourite in the warmer weather for its outside tables. This time, Colonna has opened the bar in collaboration with two other expert publicans, Luigi Parise e Lorenzo D’Annibale, putting their combined know-how to good use.

The main copper lined bar hides a state-of-the art delivery system for its 18 taps and six hand-pumps. The tap list is similar to Ma Che – including beers from Eastside and Vento Forte, as well as Ma Che favourites such as Birrificio Rurale’s Seta and that weissbier from Weihenstephaner. But the fun part is the built-in street food stall in an adjoining room – Stefano Callegari’s Trapizzino, no less. These mouthwatering pockets of pizza dough are stuffed with the sort of oozing fillings you’d usually see on a trattoria table – expect melanzane parmigiana, meatballs in tomato sauce, or hunter’s chicken, for around €4 per sandwich (and be ready to order two or three if you’re looking to substitute your evening meal).

Read next: A Guide to Drinking Cocktails in Rome