A guide to some of the best beaches in Sicily

The South East coast of Sicily is still relatively unspoilt in terms of its beaches and seaside resorts, making it a good destination for travellers seeking a restful beach holiday away from mass tourism. The provinces of Siracusa and Ragusa feature plenty of characteristic towns in their interior with rugged hilltop settings, but this guide will focus on escaping to the beaches during the hottest times of the year to seek out some of the best beaches in Sicily.

You should of course expect to find plenty of locals at the coast in high summer, but tourism here isn’t particularly international in flavour, so even packed beaches have a uniquely Italian feel.

Furthermore, this guide to South East Sicily’s top ten beaches includes something for everyone – so whether you’re looking for a wild spot of unspoilt coastline, a place to go surfing or windsurfing, or an elegant beach resort with full services – read on!

The following guide begins with the Sicilian beaches on the east coast (Ionian sea) just below the town of Siracusa, and works down round the ‘corner’ of Sicily to the south coast (Mediterranean), finishing at Marina di Ragusa. Scroll to the foot of the post for the full video story on some of the best beaches in Sicily. 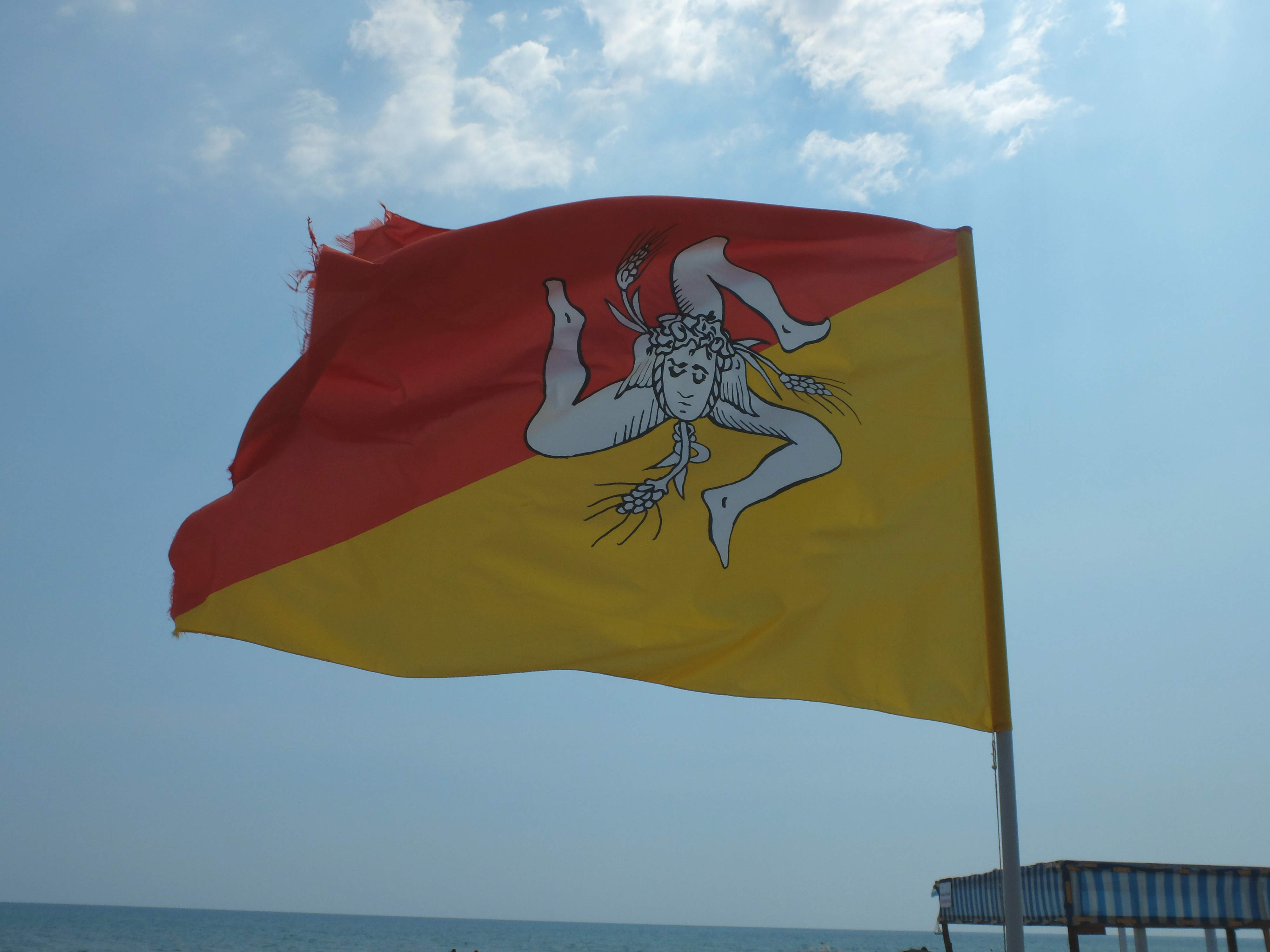 The main beach resort associated with the town of Siracusa, Fontane Bianche is named after the freshwater springs found just outside the walls of the old town. Now, it’s more famed for its pale beaches and aquamarine sea, coupled with a lively nightlife in the summer where pubs, bars and restaurants along the sea-front jostle for customers. Expect densely packed beaches in high season, whether you’re aiming for public stretches or paying resorts. One of Sicily’s most popular beaches.

Local tip: Above the town, follow the river upstream for a dip in naturally occurring waterfalls and to visit a spectacular canyon.

Beyond the beaches: Take some time to visit the gorgeous town of Siracusa, famed for its Greek ruins and home today to an elegant island at its heart called Ortigia, noted for excellent restaurants and a refined, well-preserved ancient centre.

Finding Cala Mosche isn’t easy, which is part of its charm: if you hire a car, be ready with the GPS and look out for the turning off the main road into the nature reserve of Vendicari, which is only distinguished by letters hand painted on a rock. Expect to park for a modest amount in the nature reserve car park, and then walk a couple of kilometres across the wild park to reach the sheltered cove of Cala Mosche. Busy in the summer, its still a rare delight, surrounded by rocks and unspoilt cliffs, and miles away from civilisation.

Local tip: Wear sensible shoes to walk across the reserve and bring backpacks containing food and drink – there are no bars or services here, not even life guards.

Beyond the beaches: Out of season, the Vendicari nature reserve is still worth visiting, as it is host to an entire ecosystem. Try bird-watching from its observation huts, where you can view flamingos, herons and storks at different times of year. Definitely one of Sicily’s most beautiful beaches. 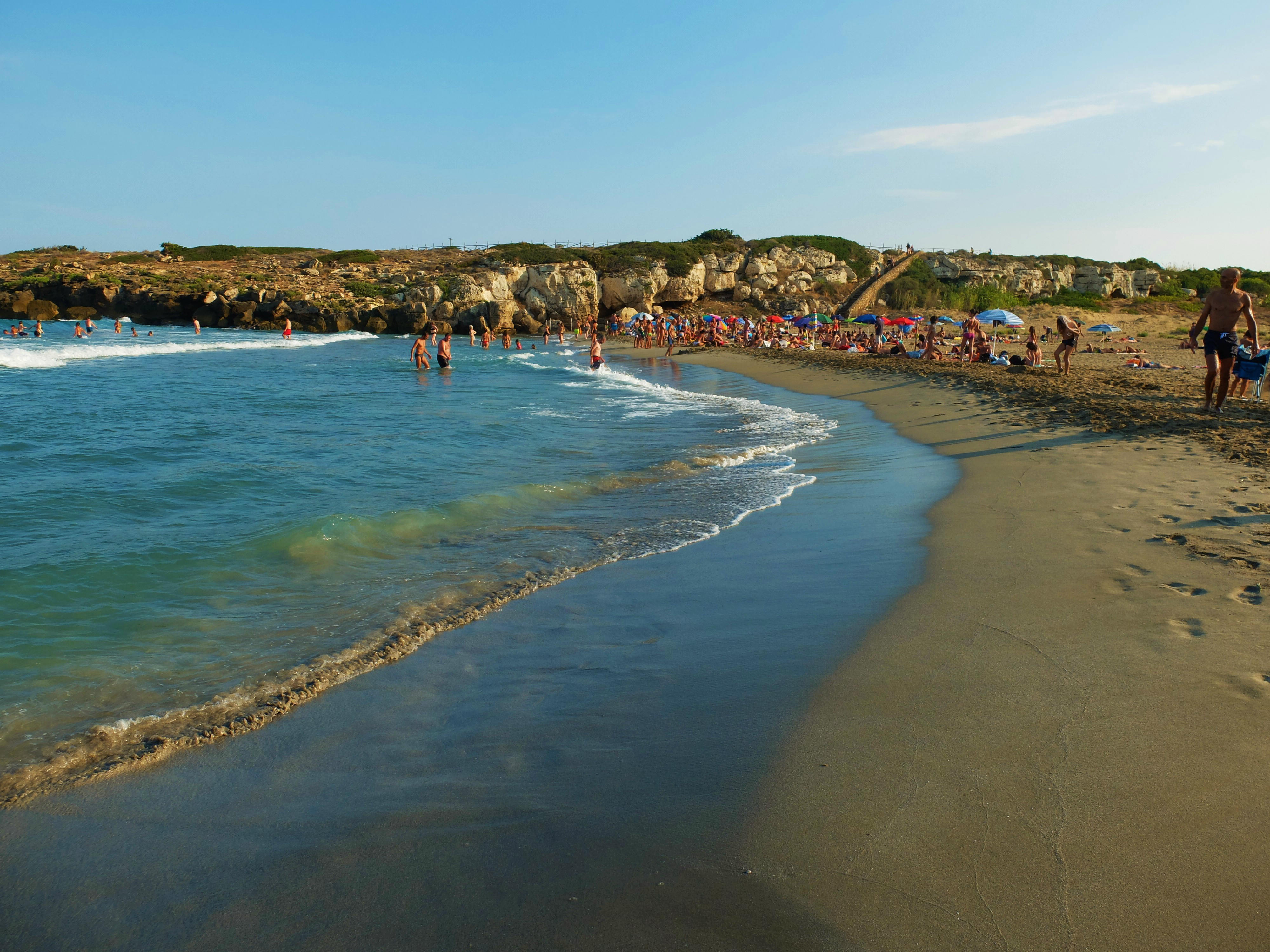 San Lorenzo is the ideal destination on those days when you don’t feel like slumming it on a free beach and want a few home comforts. Located just below the Vendicari reserve, its rafia beach umbrellas still blend in to the coastline, but the main beach resort here comprises a veritable complex of services including three restaurants, shops and a relaxing stretch of beach lapped by the Caribbean-blue Ionian sea. Paradise!

Local tip: Book your sunbeds and umbrellas at the beach resort at weekends and during August by phoning ahead, as it’s almost always sold out during peak season.

Beyond the beaches: Enjoy long walks along the unspoilt coastline here, fully immersed in nature.

This sleepy coastal town offers a mix of public beaches and services, for family-friendly, relaxing holidays.

Local tip: visit the nearby town of Pozzallo in the evening for a bigger choice of nightlife.

Beyond the beaches: The feudal town of Rosolini in the hinterland dates back to Medieval times and still has a lively town centre. Look out for food festivals and saints’ days here in the summer, at this, one of Sicily’s most beautiful beaches.

Pozzallo is a ‘real’ town which continues to function out of the summer season, so if you come here in June or September you’ll still find plenty to do, unlike some of the neighbouring resorts which turn into ghost towns. A friendly place with plenty of shops, bars and restaurants, its still compact enough to stroll around in the evenings, watching the world go by. Its beaches are wide and clean, with a choice of services and free stretches.

Local tip: Holiday rentals are fairly inexpensive here, so it’s a good base to explore the coast.

Beyond the beaches: Catch the ferry to the Island of Malta from Pozzallo for a day trip with a difference; the trip takes about 2 hours each way and costs around €100 per person for a round trip, depending on the time of year. 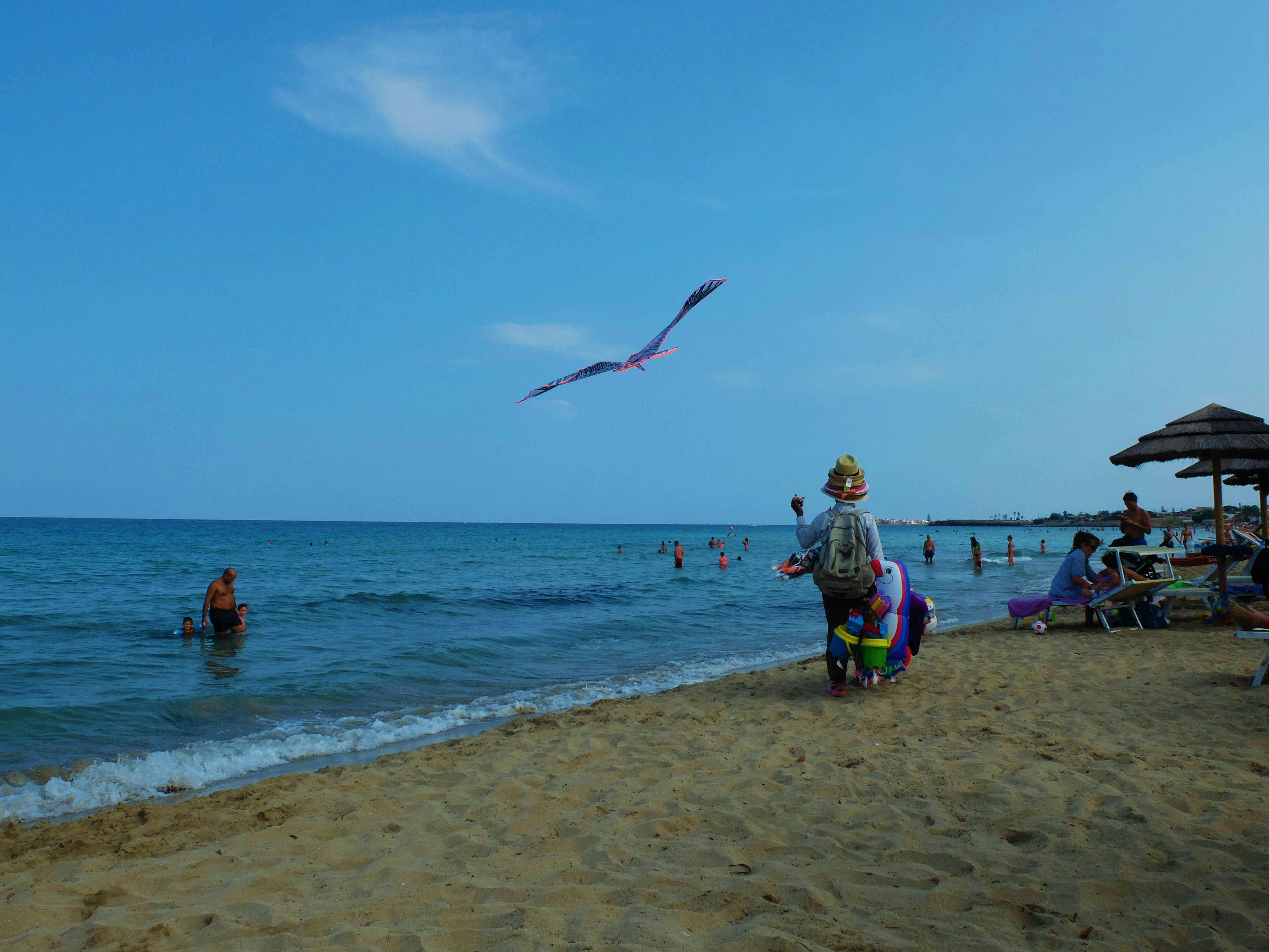 This is another lively town in high season which tends to empty out very quickly at the end of August. Expect plenty of nightlife in the summer and full hotels as it really is one of Sicily’s best beaches.

Local tip: This stretch of coast is subject to high winds, favourable conditions for watersports including surfing and windsurfing.

Beyond the beaches: Visit the eponymous town of Modica in its hinterlands, famous for its chocolate and sweet mincemeat cakes.

A small hamlet dominated by a family-friendly long, curved beach, with water that stays shallow for 500 metres, Sampieri offers a busy beach full of umbrellas and sunbeds for rent, but you can also find your spot to throw down a towel and a picnic if you get there early. Definitely one of the best beaches in Sicily for families with children.

Local tip: It can get windy in the afternoons, like much of the coastline, so bring some string to ti your beach umbrella to homemade sandbags.

Beyond the beaches: There’s a great chalet-style beach bar right in the middle of Sampieri here called Pata Pata, where you can grab a drink, dance after dark, or even take an exercise class. One of the best beaches for nightlife in Sicily.

This broad, unspoilt beach is loved by locals who use it for horse riding out of season. Expect breathtaking landscapes but lots of bodies in high season at one of Sicily’s most popular beaches.

Local tip: Visit the cliffs that define this gorgeous bay, including the atmospheric Smuggler’s Cave.

Beyond the beaches: Drive in the evening to the nearby town of Scicli, a town on the Montalbano tourist route and a stunning, baroque centre with lively pubs and stunning architecture. Our pick: a pub called 97, on Via Francesco Mormino Penna 16, distinguished by well-priced drinks and friendly staff. 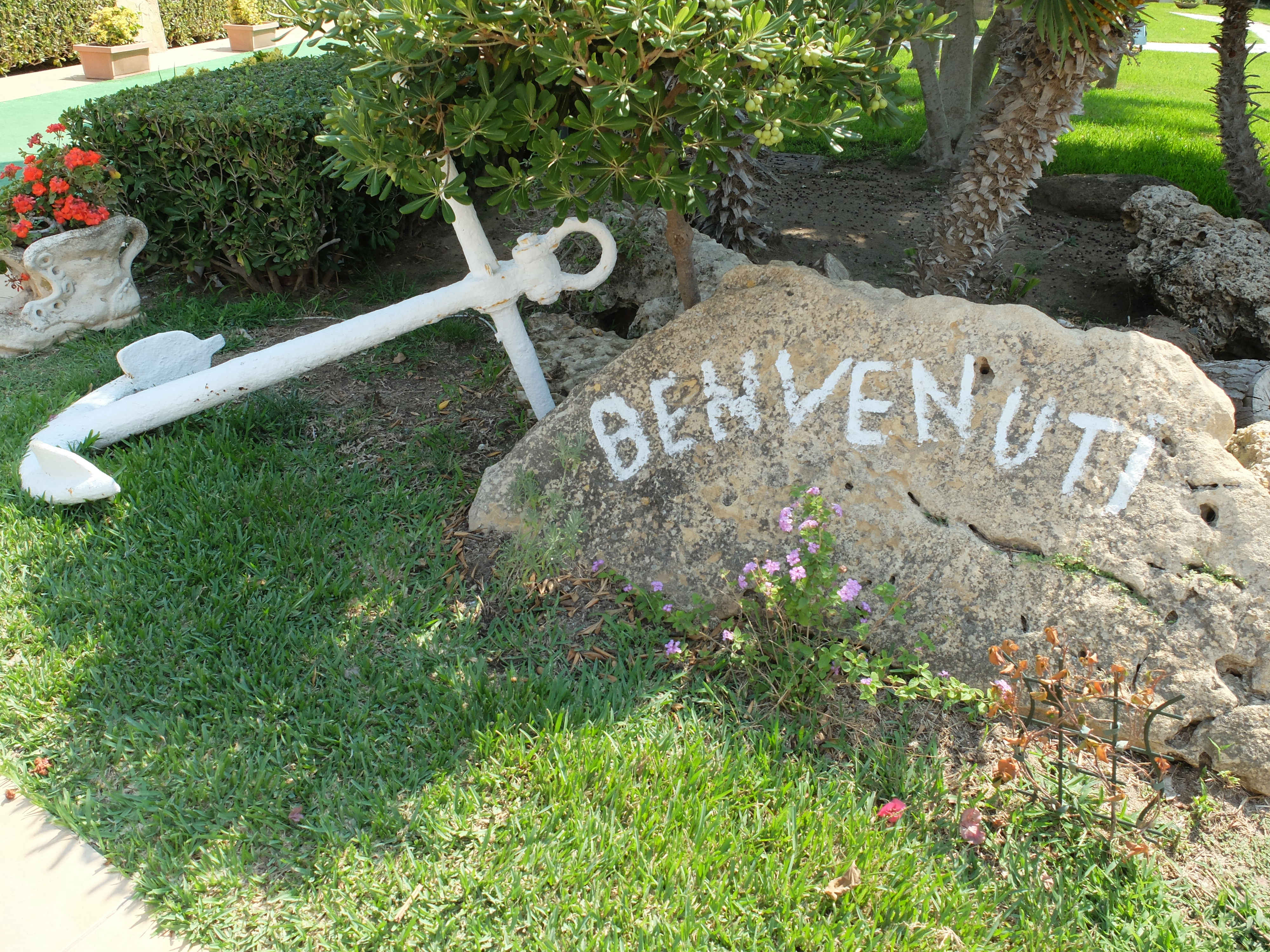 Another town associated with the fictional character of Montalbano, this is a small, friendly neighbourhood with clean beaches.

Local tip: The fish market here is full of colour (and great fish) if you’re in self-catering acommodation nearby.

Beyond the beaches: A quirk of meteorology along this stretch of coast makes it ideal for surfing and windsurfing.

Marina di Ragusa, 20km from the eponymous town of Ragusa, is the queen of beach resorts in the summer, and the destination of choice for plenty of Sicilians that decamp for a weekend or even a month to its rental apartments minutes from the beach. The beaches aren’t the biggest to cope with the numbers that flock down here in August, but half of the fun of Marina is its animated atmosphere after dark. However, once August ends, it’s a ghost-town once again.

Local tip: Expect artisan market stalls lining the sea front, plenty of lively bars, clubs and restaurants, and an addictive passeggiata (evening stroll) ritual before and after dinner during high summer. One of the best beaches for nightlife in Sicily.

Beyond the beaches: Ragusa has a stunning baroque side away from its modern bustle, and hosts plenty of saints’ days and local festivals throughout the year. Visit Ragusa Ibla half way down the hill for sleepy, timeless scenes.

Read next: Typical Sicilian food: 8 Things You Should Eat Before Leaving Catania