11 ways to get your French fix in Rome

A taste of France in Rome: 11 ideas

Rome and Paris: two capitals of European culture, which have often vied for the Continental crown in terms of food, art and as places to fall in love. It can be agony if you’re on a short trip to Europe and you don’t have time to see them both – or fully explore the heights and depths of their cuisine and history. But never fear, Rome holds Paris so dearly in its heart that it happily hosts some incredible French experiences for the curious traveller, from the French Academy to French restaurants in Rome and even French language schools. Read on for the Testaccina guide to getting your French fix in Rome, including French food, art, culture, wines and more. O là là!

The gorgeous Villa Medici (above) on the Pincian Hill is owned by the French State, and has housed the French Academy in Rome since 1803, thanks to the vision of Napoleon Bonaparte. He took the dilapidated mannerist villa with its tangled gardens and renovated it to host the winners of the Prix de Rome, hoping to attract young French artists and inspire them to learn from Rome’s masterpieces of antiquity and the Renaissance period. These days, it also hosts avant-garde music festivals, recitals and exhibitions, and you can book guided tours directly with the structure. Look out too for free cultural events on Thursday evenings, featuring music, literature and art.  Viale della Trinità dei Monti, tel +39 06 67611

Le Carré Français is one of the best French restaurants in Rome, situated between the Spanish Steps and the Vatican in the Prati neighbourhood. To call it ‘only’ a restaurant however is rather reductive, as Le Carré Français is an all-day, one stop shop celebrating French cuisine, selling speciality cheeses and wines, as well as acting as a coffee shop, bakery, wine bar and more. Pop in to Le Carré Français from 8am for an informal breakfast, including freshly baked croissants and morning goods, to start your day in the French mood. While you’re here, don’t forget to pick up fresh French bread, cheeses, wines, cakes, and patés to fill your store cupboard when in Rome. Via Vittoria Colonna 30, tel +39 06 6476 0625

The French were no fools when they planned a building to house their national church in Rome during the 16th century. Commissioned by Cardinal Giuliano de’ Medici and designed by Jean de Chenevière, the church houses an incredible collection of art, crowned by the cycle of paintings executed by Baroque master Caravaggio in 1599-1600 about the life of St. Matthew. Note too the massive fleur de lys set in the floor. This is one of five churches in Rome proudly serving the French community. Piazza di S. Luigi de’ Francesi, tel +39 06 688271 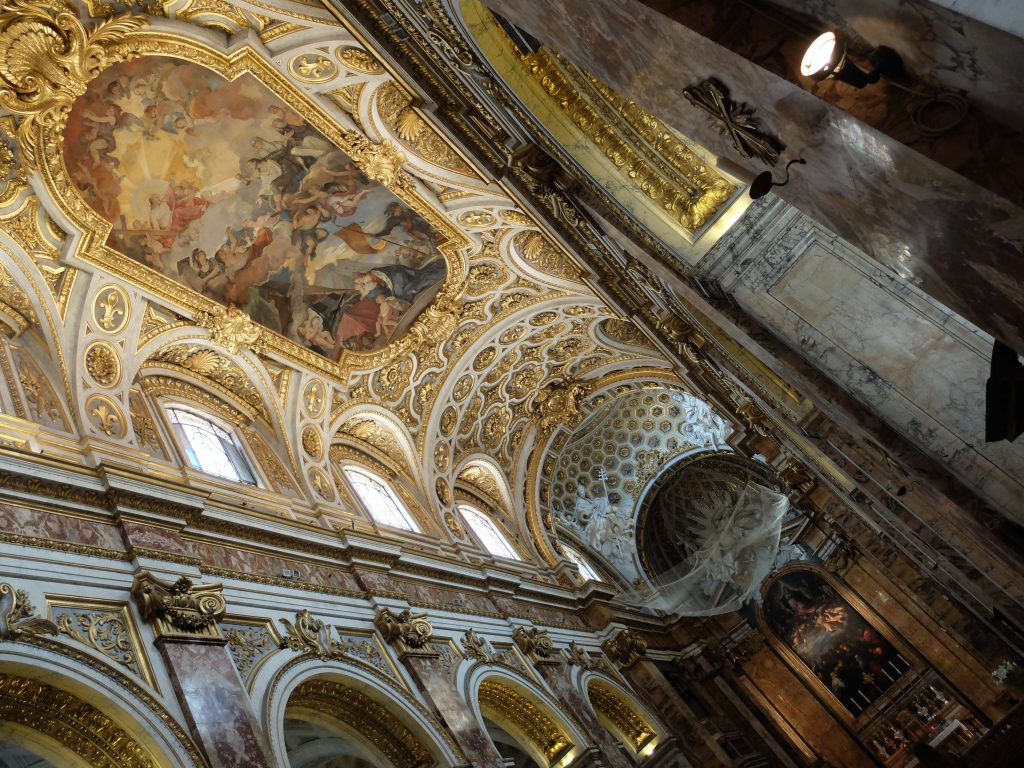 Another great French resource in Rome, this bookshop is a haven for Francophiles, with French language books about every subject, but specialising in particular in French tomes on the history of Rome and Italy. Put on your clever specs and a dash of red lipstick and go hang around in the existentialist philosophy section and you’ll never know who you might meet. Or is that just me? 23 Piazza di S. Luigi de’ Francesi, tel +39 06 6830 7598 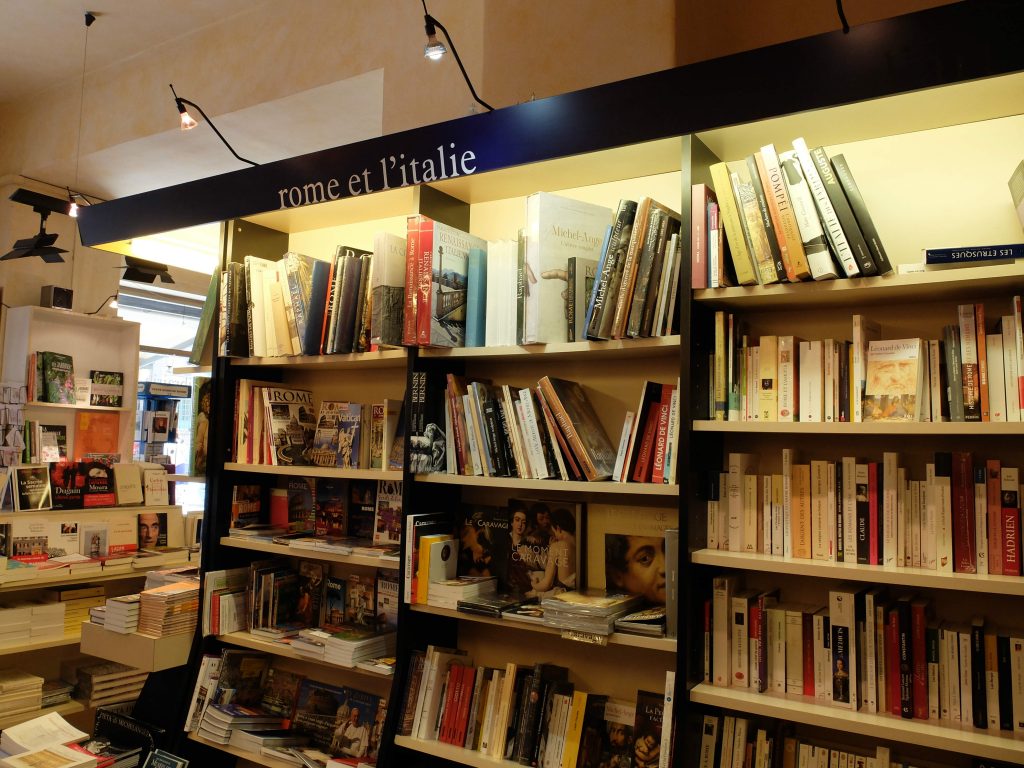 It’s hard to gain entry to Palazzo Farnese unless you’re here on French business or have reserved a private tour – but it’s still worth admiring this beautiful building from the piazza below. Currently housing the French Embassy, when the lights are on in the upper windows you get a glimpse into another world, including a peek at the extraordinary art in the Galleria dei Carracci. Another French masterpiece in Rome!

Are there other French restaurants in Rome? You bet! If you’re hankering after French onion soup, Breton oysters, Bourguignon snails or even a simple quiche, I’ve got good news: all these and more are available at the chic bistro La Renardière on Viale Aventino, near Circus Maximus. This tiny restaurant will transport you to a corner of Paris – but don’t forget to book as there aren’t many tables! Viale Aventino 31/33, tel +39 06 87785445 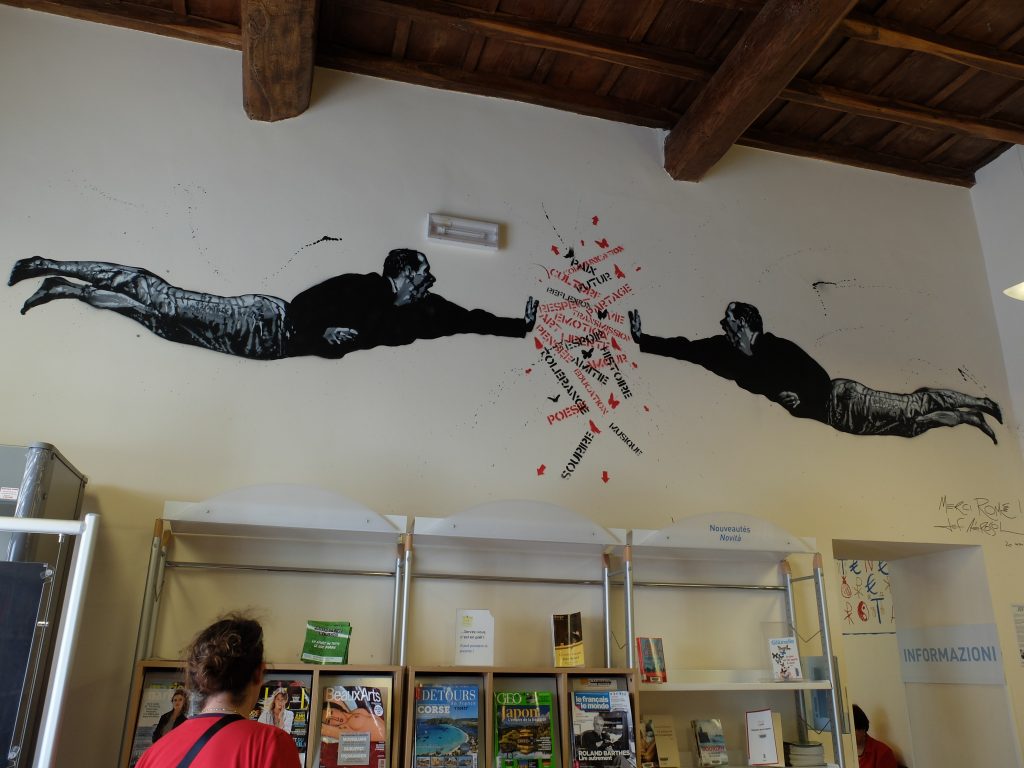 The French Institute in Rome is the go-to place for actively learning about French culture. Take a French class, become a member of the library, or watch some French cinema here. It’s Frenchie heaven and another unmissable way of accessing French culture in Rome. Largo Giuseppe Toniolo, 20-22, Tel +39 06 680 2626

Sometimes you just fancy being served French food by missionary nuns in a Renaissance Palace with original frescos in the heart of Rome. L’Eau Vive was invented precisely for those moments. It’s a gorgeous, unique experience that everyone should try just once, and the food – in the Cordon Bleu style – is actually pretty good! Via Monterone, 85, tel +39 06 6880 2101 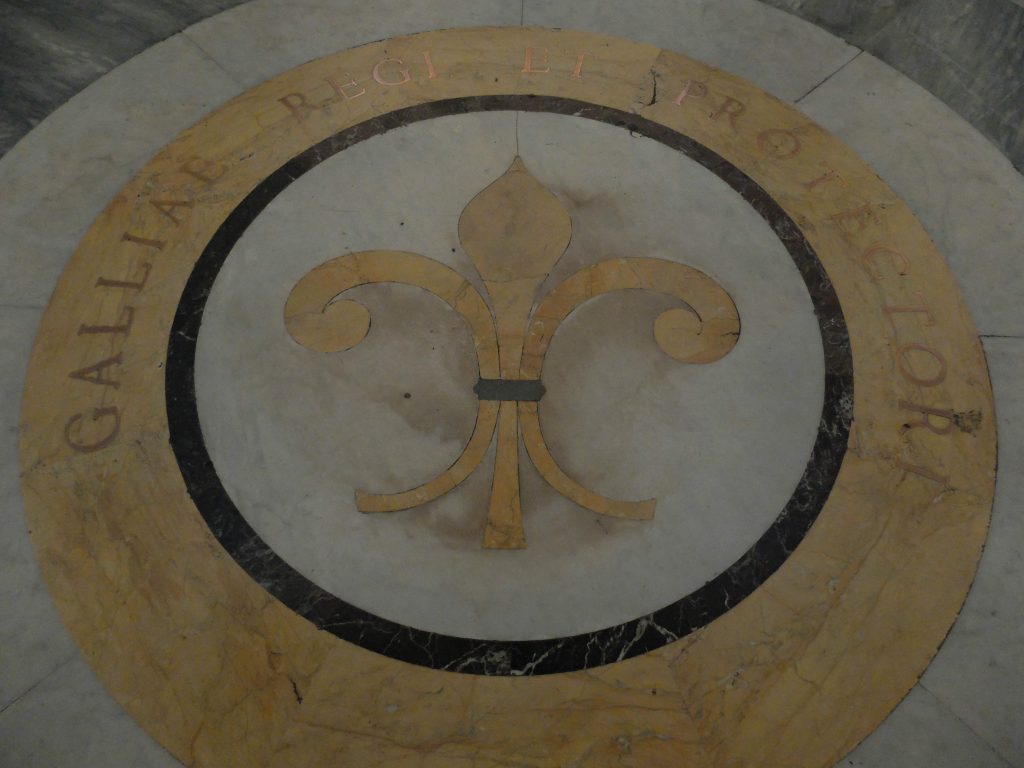 Don’t be fooled by the unassuming exterior – this is one of the best wine bars in Rome to enjoy an excellent selection of French food and wines, with a formidable range of pates, cheeses, and of course, champagne. Perfect for breakfast or a working lunch, expect tasty croissants, baguettes and a perfect croque-monsieur, as well as other French delights on the reasonably priced menu. Via Cesare Baronio 141, tel +39 393 473 7401 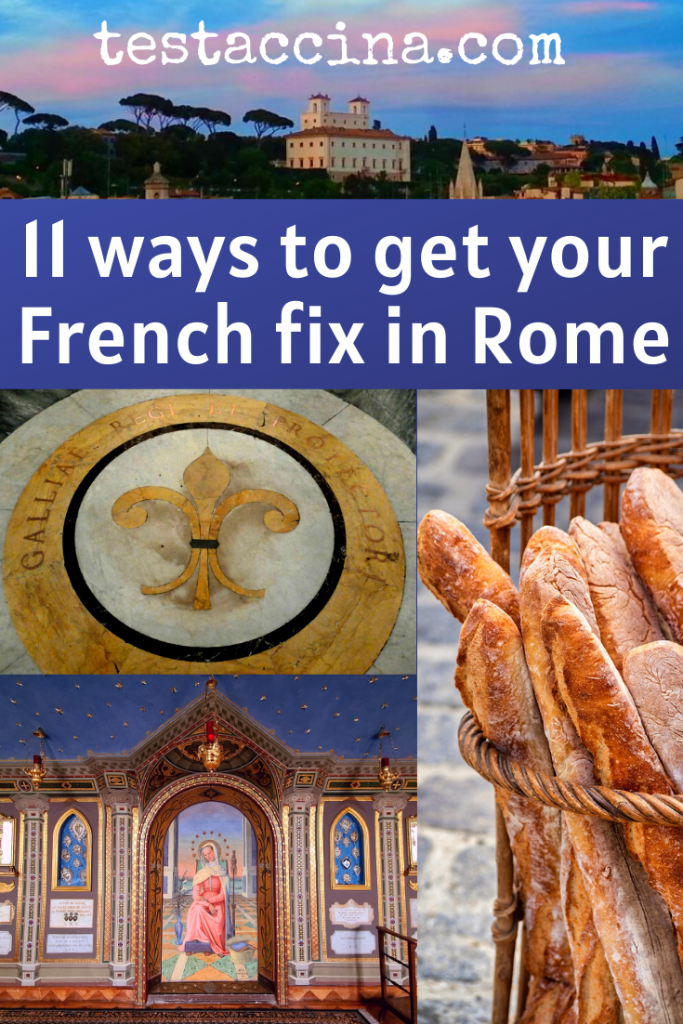 This French bakery in a side-street of Trastevere offers warm croissants, fresh baguettes and hand-made macarons. Speciality cakes are exquisitely executed bringing a real flavour of France to Rome. My mouth’s watering just thinking about this… Stuff it, I’m off! Bon appetit and bonsoir! Via Luigi Santini 22, tel +39 06 6456 288

Read next: 30+ Trastevere restaurants & bars: Where to eat in Trastevere, Rome