Review: Cook in Tuscany serves up a magical Tuscan week of cooking and fun

A residential cooking school in Tuscany may sound like scary stuff, but after spending the best part of a week with Cook in Tuscany, a cookery course and Tuscan holiday in one of the prettiest parts of Italy, I am delighted to say that this course suits all levels and is a wonderful introduction to food in this idyllic corner of the world.

Cook in Tuscany: the review

The residential part of Cook in Tuscany is really a marvellous excuse to stay in the hills above the Val di Chiana, in a 14th century village called Montefollonico, a hamlet with just 400 residents.

Cook in Tuscany holds seven-day courses here in just two periods of the year, early summer (May – June) and autumn (September – October), so the courses are pretty much booked up at least a year ahead (apart from the odd cancellation).  The reason for this is to ensure that guests see Tuscany at, quite frankly, the best times of the year – avoiding summer heat and winter gloom. 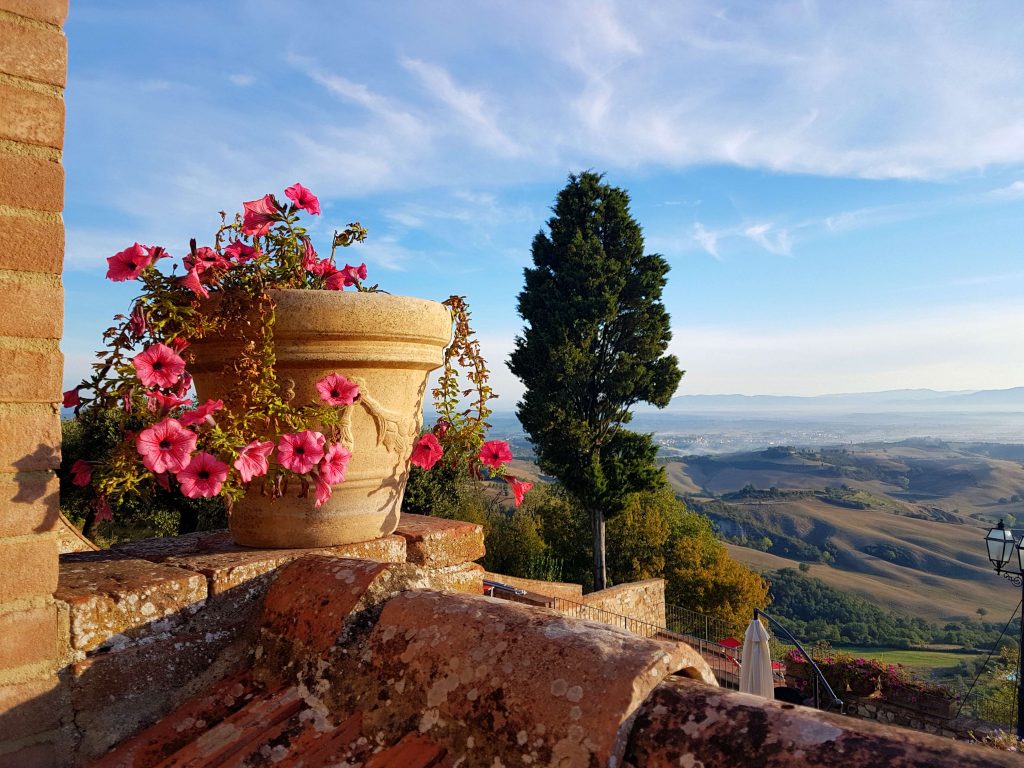 The Cook in Tuscany course starts on a Sunday afternoon with a welcome aperitivo and dinner. As, quite frequently, two courses are running in parallel, this Sunday meet is the chance to mingle with the other group, making up a 25-strong party, while the cooking classes, guided tours and tastings for the remainder of the week are exclusively held in a smaller group of around 12 people. 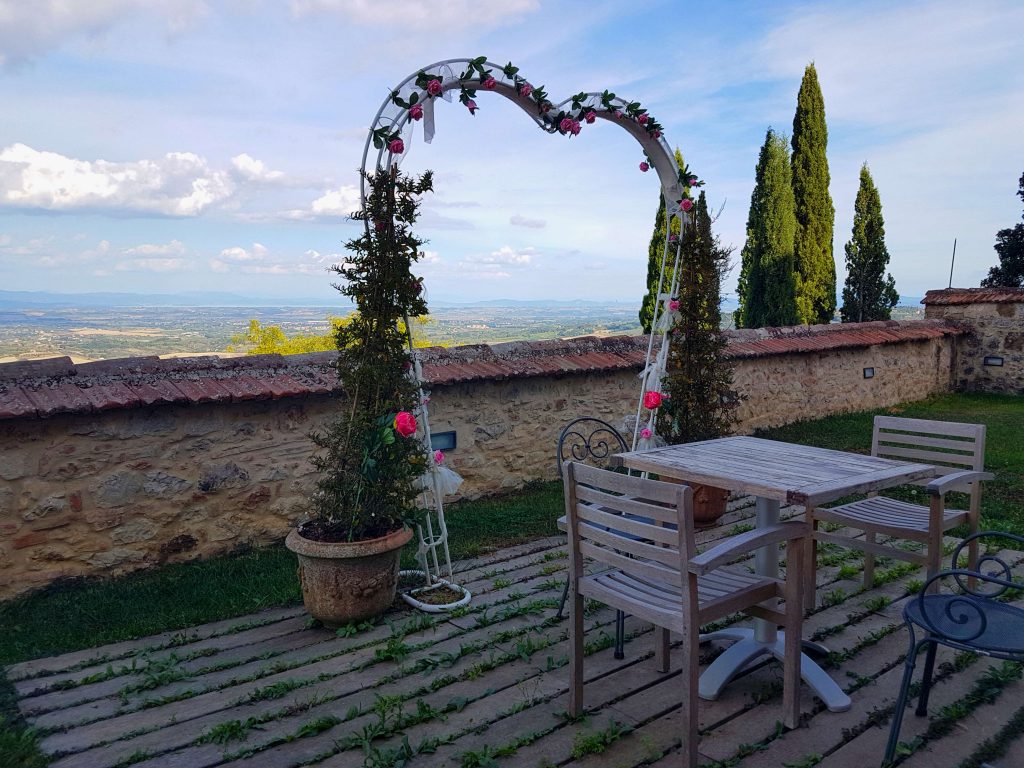 Throughout the week, the cooking lessons – in a mix of restaurant kitchens in Montefollonico and beyond – are generally held in the mornings, and are a chance for the group to work with Italian chefs from different restaurants and backgrounds, in a variety of spaces. 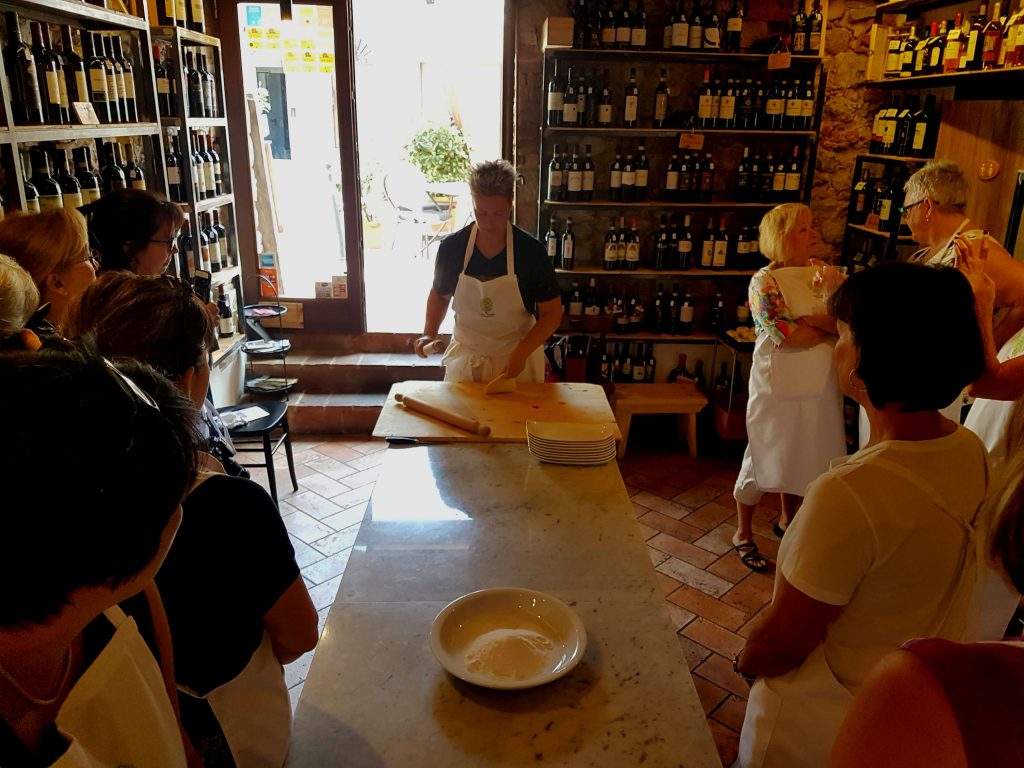 Expect to take at least three pasta making classes – including how to make local Tuscan favourite pici, tagliatelle and ravioli – plus the preparation of bruschette, risotto, stuffed zucchini flowers and other delicacies, as well as an introduction to meats and main courses, including Fiorentina steak, stuffed chicken, pork fillet and even homemade desserts such as jam and chocolate tarts. 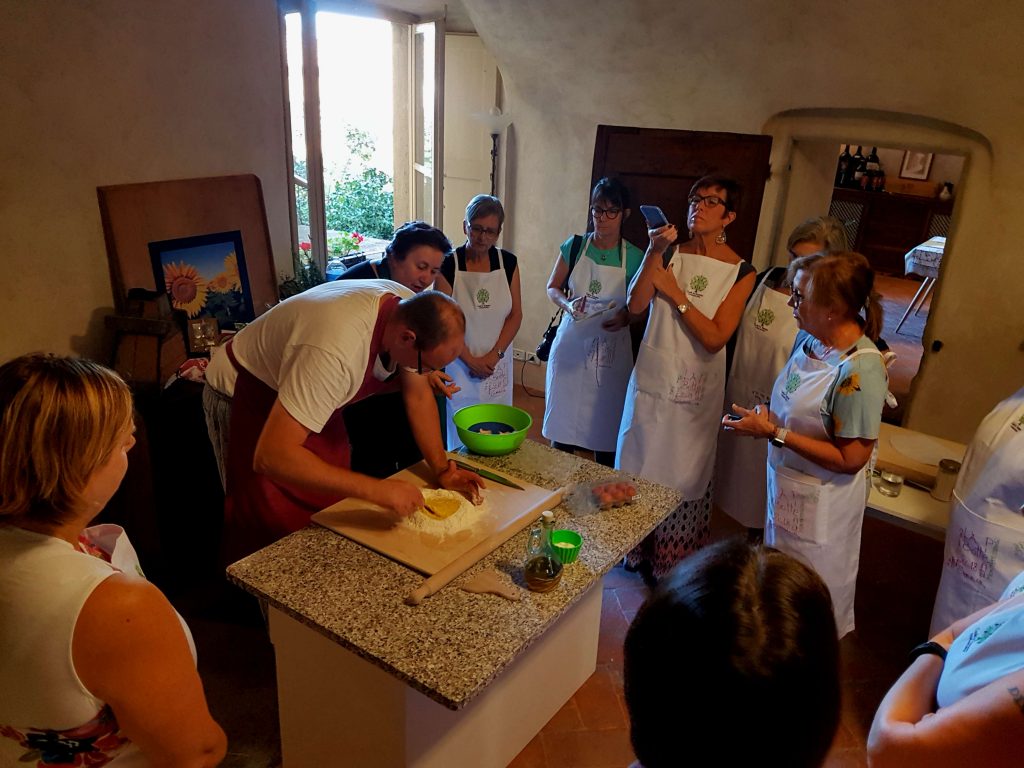 On top of this, a mix of watching, stirring and assisting throughout the morning means that each three to four-hour session enables you to assemble a complete lunch, which you then sit down and eat with the rest of the group. 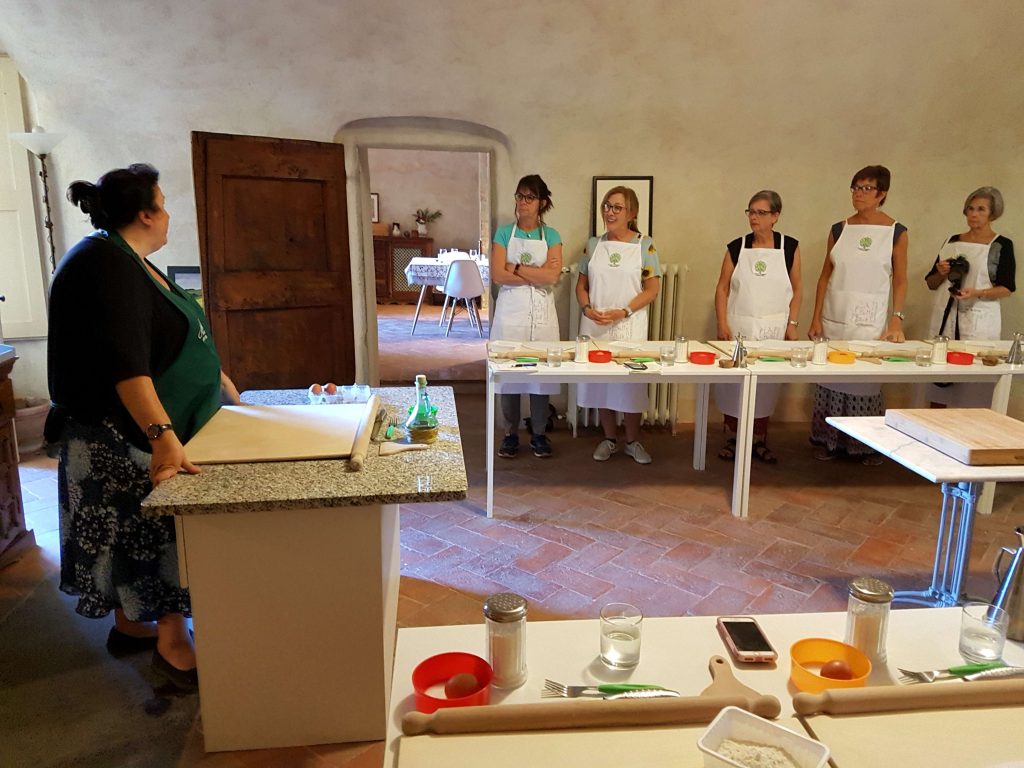 One can’t describe the Cook in Tuscany experience without talking a little but about the course’s hosts, the larger than life George and Linda who hail originally from New Orleans. Seasoned travellers with colourful personal stories, George and Linda came across Montefollonico about 15 years ago, before deciding to lease a villa in the town, creating a hospitable space for welcoming extended family and friends. 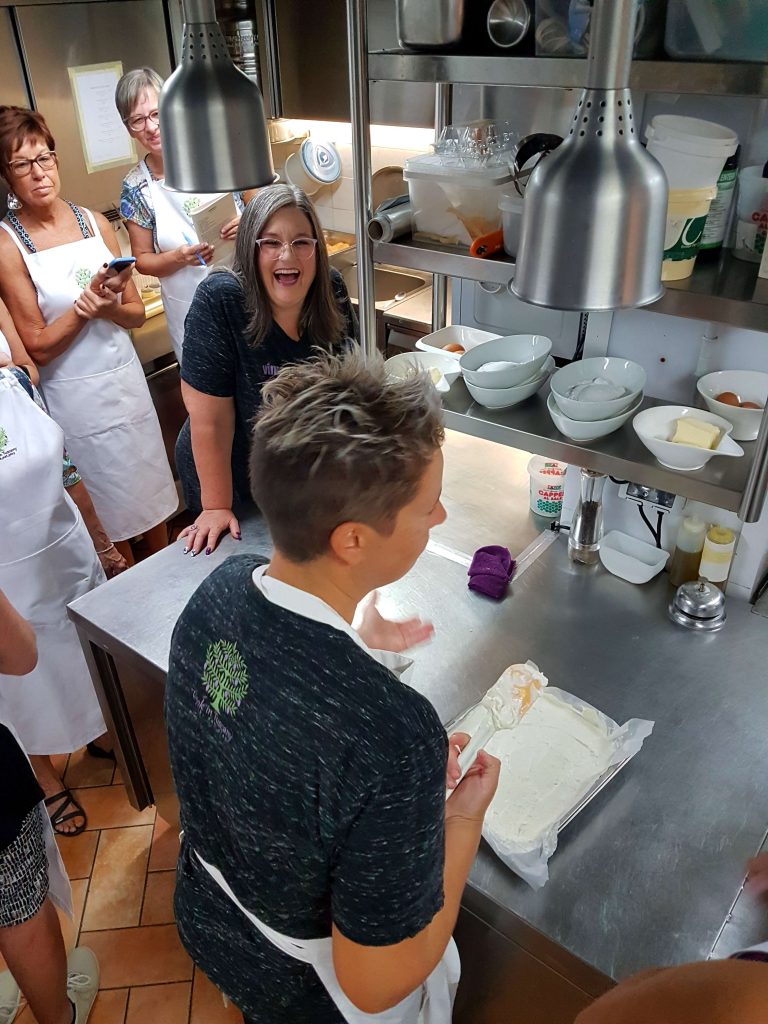 According to George, before long, they were welcoming parties of friends of friends, and started structuring week-long tours, ‘doing exactly what we like to do,’ he says. Around seven years ago they transformed this into a more formal cooking school and tour experience with the Cook in Tuscany name and brand, but the sensation of being hosted by friends remains, and the experience is informal and bags of fun. 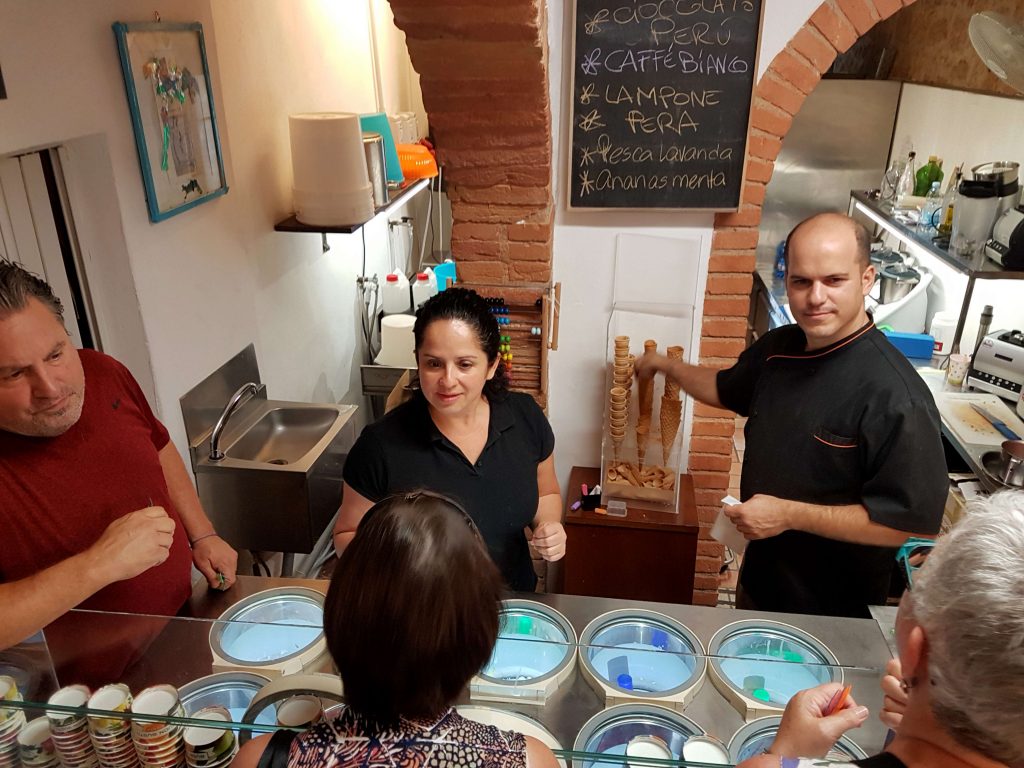 Before coming to Montefollonico for the week, I had spied a few videos on Cook in Tuscany’s website and Instagram of George and Linda cooking up a storm with their guests, leading them in dancing round the tables and a whole lot of larger than life fun. 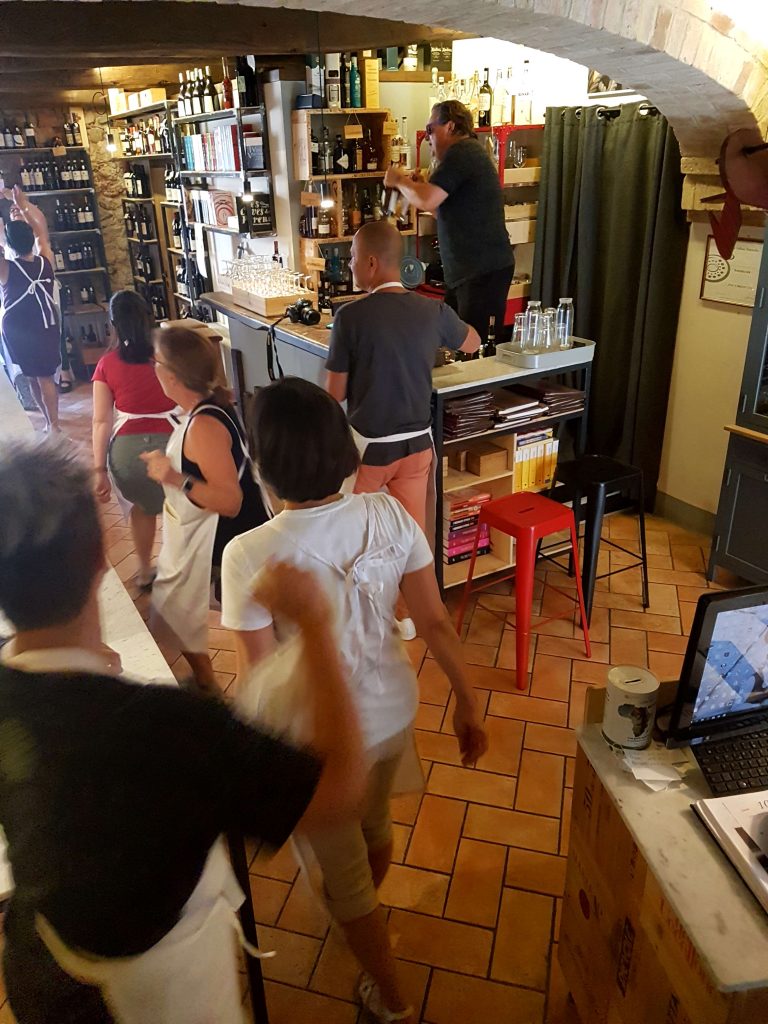 I have to admit, I was a teeny bit apprehensive about loosening my apron strings and grooving in the kitchen, but the lessons are so lively and informal that the fun just creeps in, while George and Linda provide plenty of banter and a running commentary which is a mix of anecdotes and some great tips about the village and its neighbouring towns. Their daughter Whitney is also on hand as a friendly, fun and capable counterpart to her parents, and it takes just a few hours for you to feel like a part of the family. 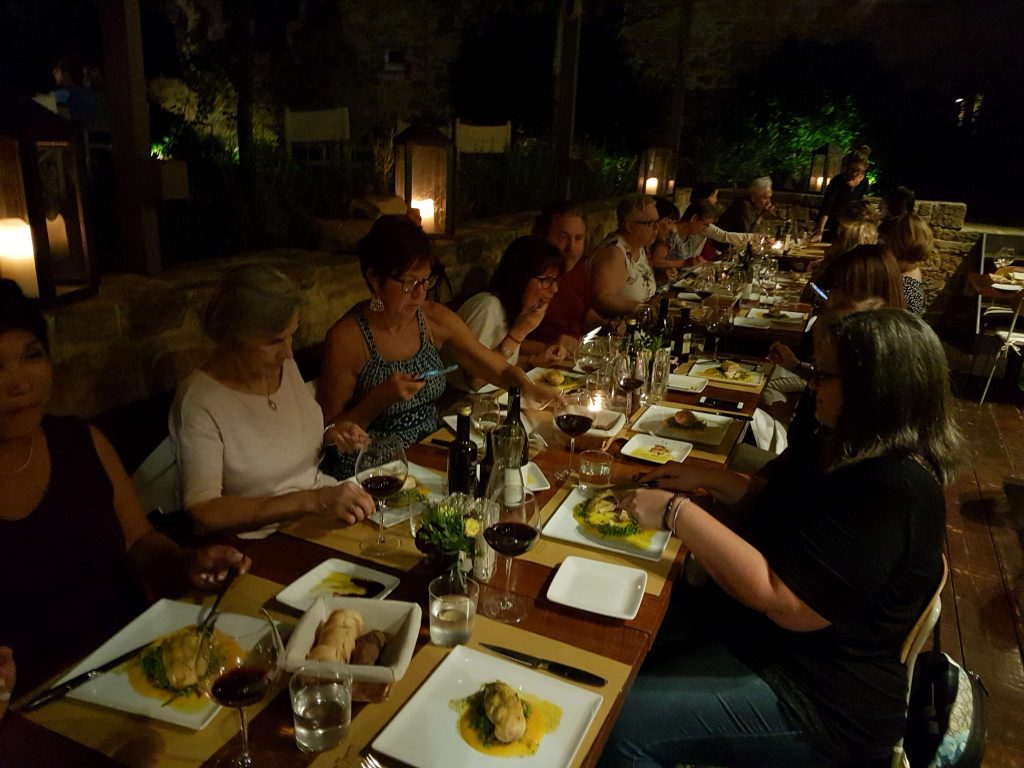 While the five mornings of the seven-day course are reserved for more structured cooking classes with the various experts across the valley, afternoons are given over to exploring the region, often with a couple of welcome hours of rest thrown in. 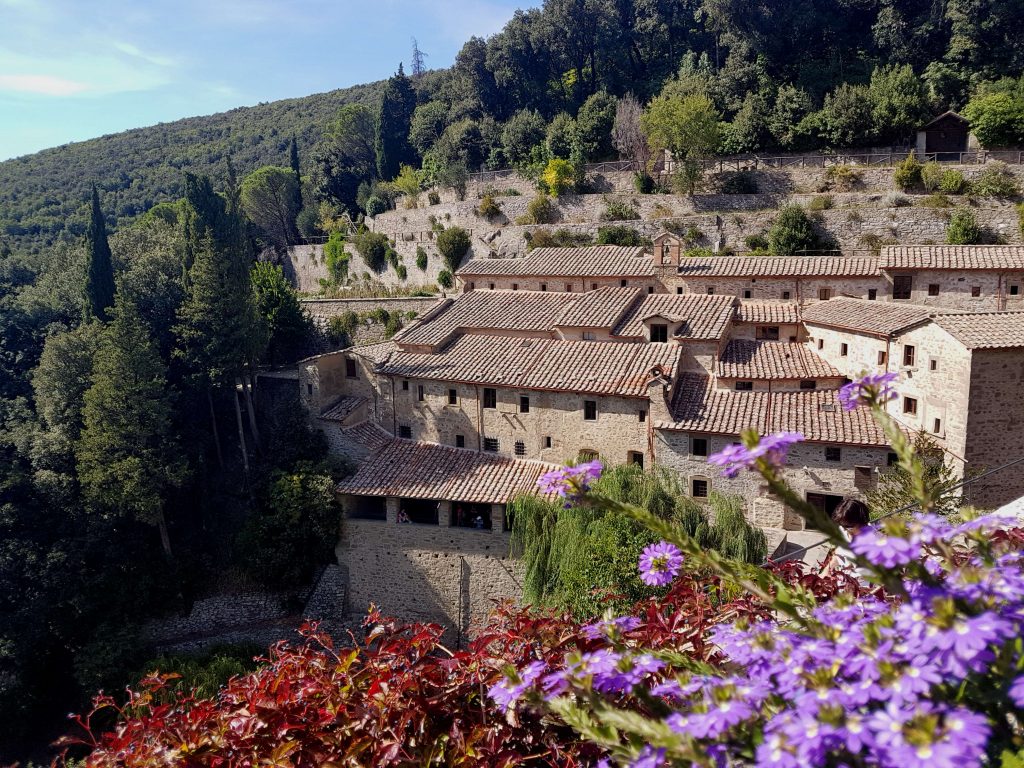 This means that guided tours of Pienza, Cortona, Montepulciano and Montefollonico are effortlessly woven into the week, made all the more special due to exactly those ‘locals only tips’ in which George and Linda specialise, or compiled into full day tours where bread or cheese making seamlessly segue into wine tasting, truffle hunting, or a trip to the Roman baths. 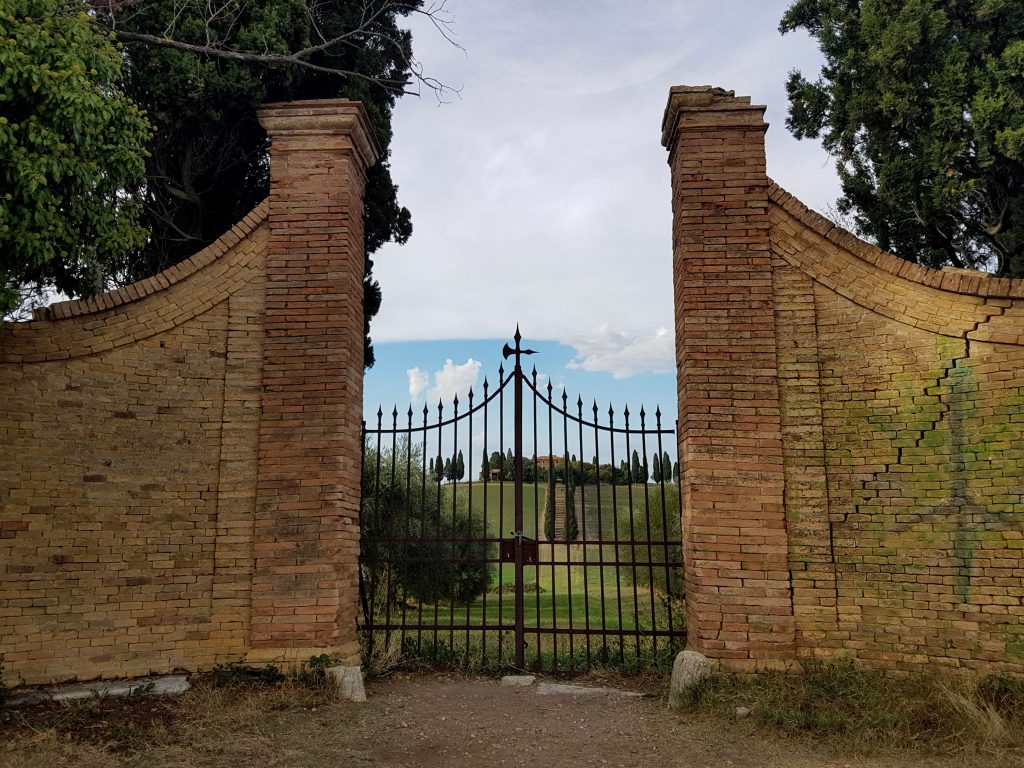 The evenings are about trying different restaurants and specialities, from pizza to some of the region’s top modern restaurants, plus lots of wonderful pasta and local wines, often back in the restaurants where you have already had some fun in the kitchens. 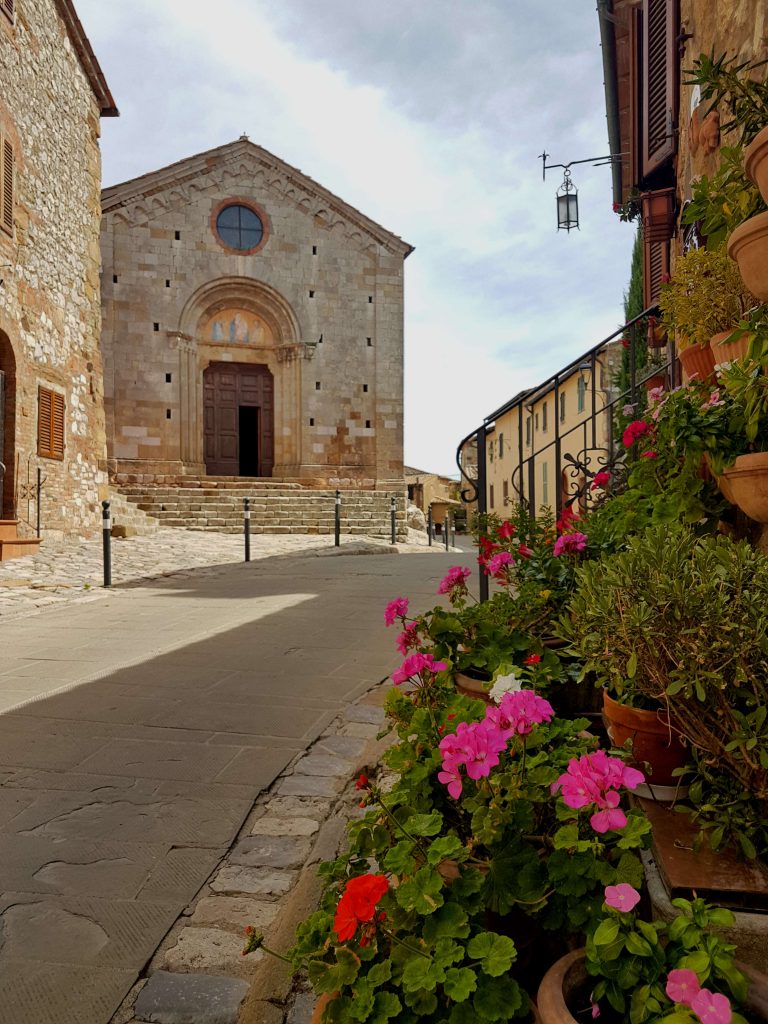 Some of my favourite of the Cook in Tuscany escapades included afternoon visits to out of the way sites such as Bagno Vignoni and Le Celle, Saint Francesco’s legendary place of hermitage. The tours are so well organised and kept to a few hours that you don’t realise how much you are squeezing in – the trusted mini-bus driver is in on many of George’s jokes so half the trip is spent waiting for the next laugh. 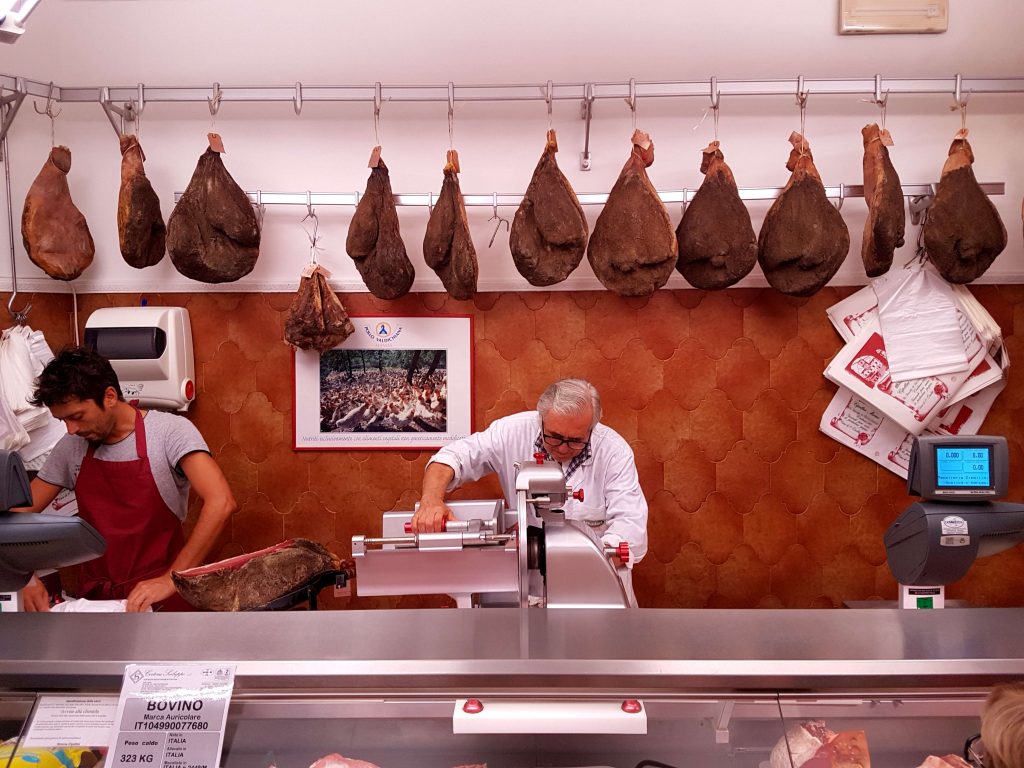 Cook in Tuscany review: the experts

Former US air force pilot George summarises his approach by saying ‘I’m not an expert, but I know a lot of experts’, and his ‘friends list’, many of whom you meet during the week, is certainly impressive. But George and Linda are far more than mere facilitators – they are the life of the Cook in Tuscany tour. They don’t delegate to other tour guides but do it all themselves, drafting in experts of cooking and produce to give the experience depth and real value, but leading with the music, camaraderie and absolute charm. 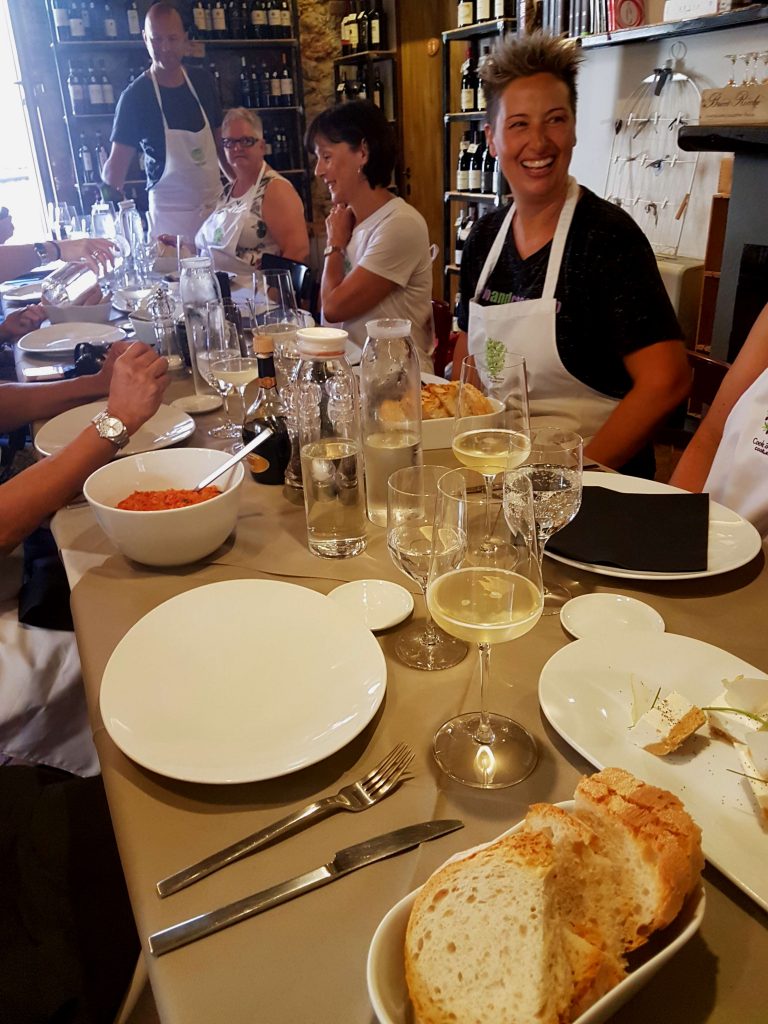 Over the years of coming to Montefollonico, both George and Linda have become a treasured part of the community and have acquired a lot of knowledge themselves. When effortlessly promote the area’s excellence in the shape of restaurants, producers, craftspeople and resources they are essentially talking about their friends and neighbours.

Expect to meet local characters such as Elena and Simone from La Botte Piena, gelato chef Nicola of BuonGusto, Paolo of La Costa and many more.

Most of George and Linda’s guests are American, but there are also plenty of Canadians, plus a few Australian, South African and British guests. The Cook in Tuscany course on the whole attracts mother-tongue English speakers but it would be easy to follow if you have a good level of conversational English (or indeed, Italian). 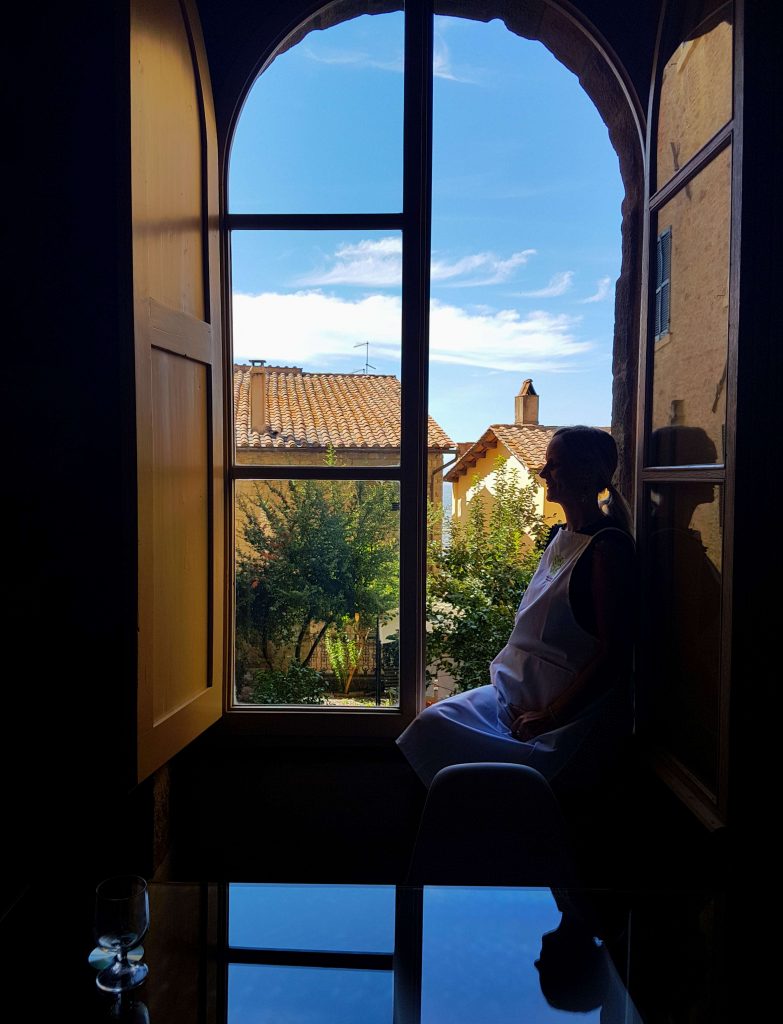 Cook in Tuscany is particularly accessible for trans-Atlantic travellers who are coming to Europe for the first time as George and Linda have constructed an experience which starts with the essentials of Italian life, and are also very knowledgeable about State-side sources of Italian ingredients and even fresh produce. There were also a lot of first timers to Italy on my course, travellers who had saved up for a once in a lifetime trip to Tuscany, or who were trying out a dream Italian cooking course to celebrate retirement or an anniversary, although the course does attract all ages.

George and Linda don’t take this responsibility lightly – every Cook in Tuscany guest is treated like royalty (and alternately become the butt of a joke or two). It’s all good and everyone is soon in the spirit of the holiday. 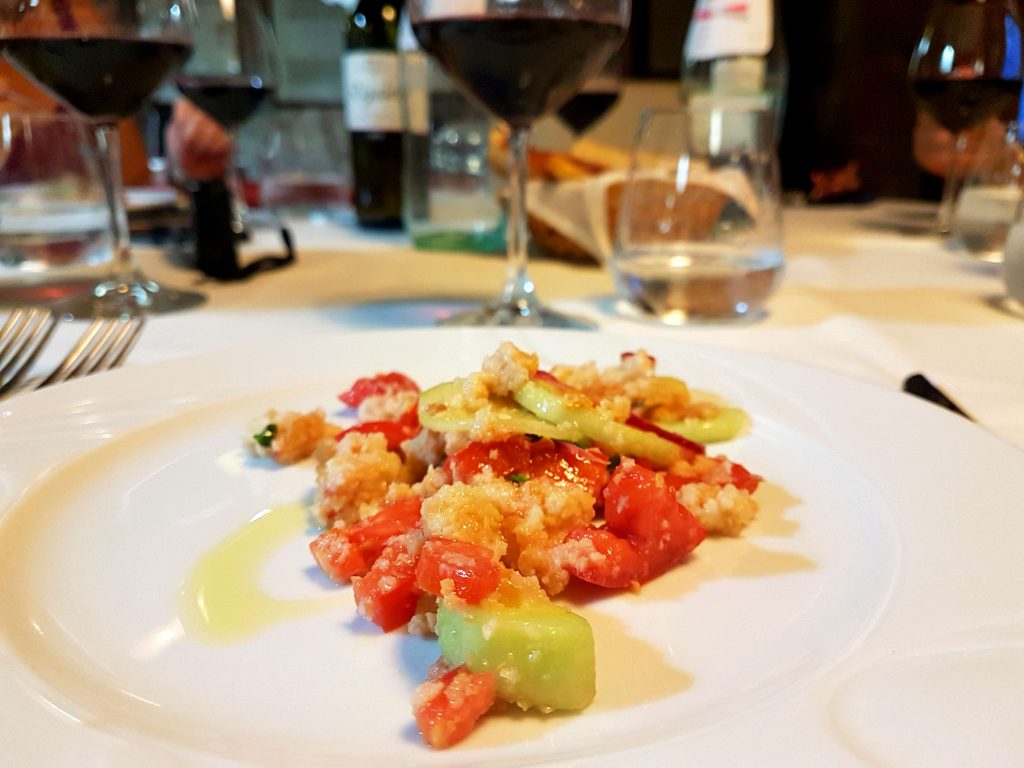 The central theme is that food really does bring everyone together, and it runs like a rich seam throughout the week. At every stage, you are expected to muck in – bringing dishes or clearing plates – and this easy approach creates a family vibe by the end of the course. 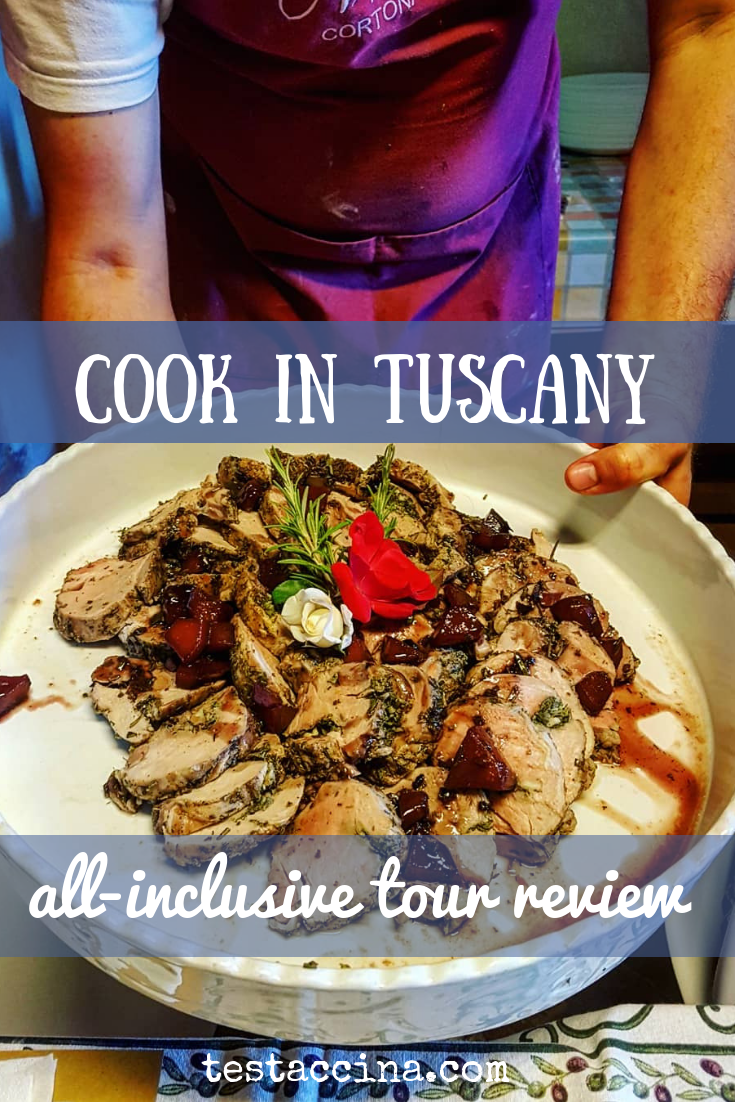 When I first looked at the price list, before heading off to Tuscany, my first impression was that the Cook in Tuscany experience isn’t cheap, although does include absolutely everything – except flights and airport transfers. That means no worrying about accommodation, transport for exploring Tuscany, dinner reservations or high quality meals and drinks, wine tastings, truffle hunts, bread and cheese making events and more. The course runs for seven days (a six-night stay) and costs $3850 per person, based on double occupancy. 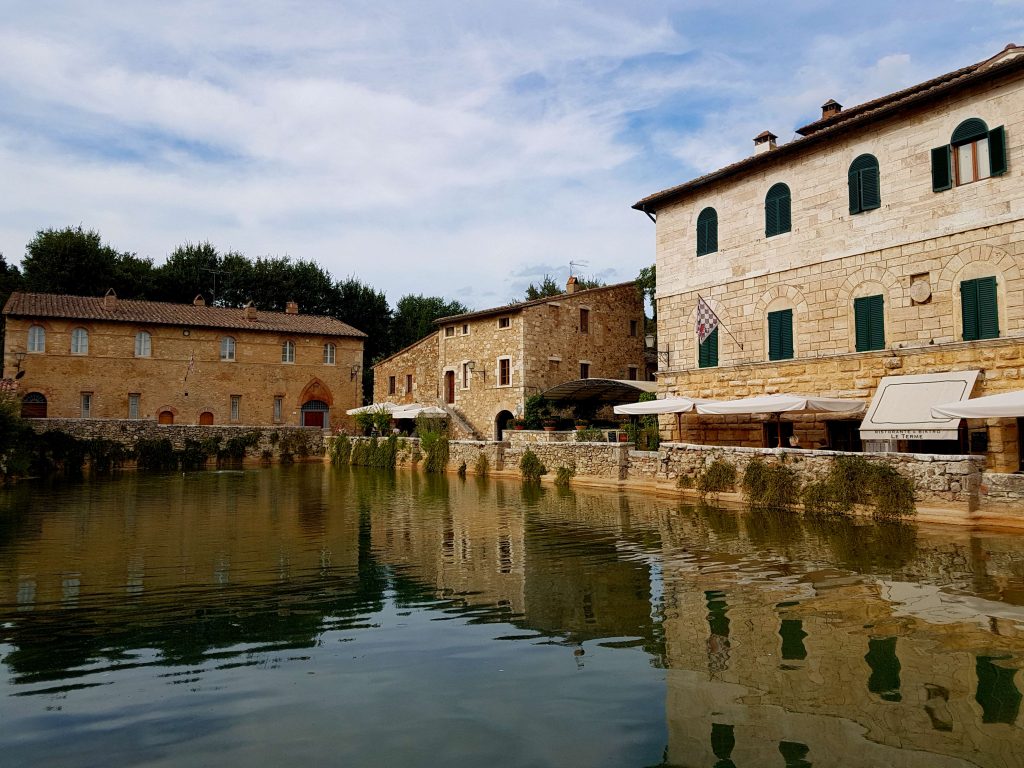 Cookery booklets are supplied detailing all the recipes made and the names of the chefs and cooks, which quickly become a diary of the experience, and a handy notebook for annotating seasonal ingredient changes or clever hacks.

However, after spending the best part of a week with George and Linda, I have changed my mind. Cook in Tuscany is absolutely incredible value for the wealth of knowledge and experiences that are crammed in! At the end of every day, your mind is ringing with fresh memories, despite also having had more than adequate rest time in between cooking and town visits. Paired with the ‘George and Linda show’, it’s an absolute blast. 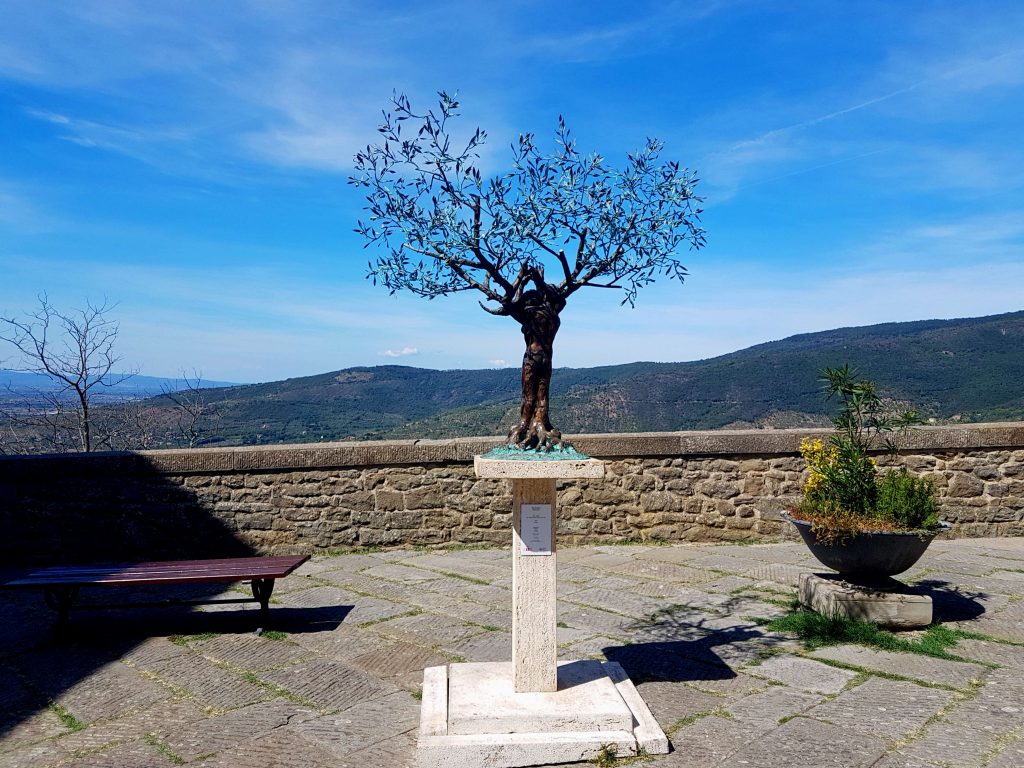 Cook in Tuscany review: do it!

Cook in Tuscany is more than a residential cooking course – it’s a Tuscan holiday, an Italian food experience, a chance to make new friends and peer into the wonderfully bonkers lives of George and Linda.

If you enjoy the course, by the way, you might like to know that this entrepreneurial pair are currently launching Cook in France (to be held in April), Cook in Mexico and Cook in Cuba (held over the winter) and are also plotting Cook in New Orleans. You get George and Linda in every destination as they refuse to delegate or dilute the incredibly fun experience they create. Even if the food changes, you have a sense that their infectiously idiotic, inclusive style of learning and playing translates perfectly everywhere. The only question remains – where to next?

Testaccina was a guest of Cook in Tuscany

Week-long residential cooking courses and tours can be booked here.

Follow links here for George and Linda’s other current all-inclusive tours in Mexico and Cuba.

Read next: A cooking class in Rome’s Garbatella neighbourhood with BonAppetour