Trastevere is one of Rome’s most compelling neighbourhoods, and a must for an evening stroll any time of the year.

The usual dilemma, however, is where to eat: there is a concentration of tourist traps on the main drag, so it’s necessary to go armed with a few precise recommendations. 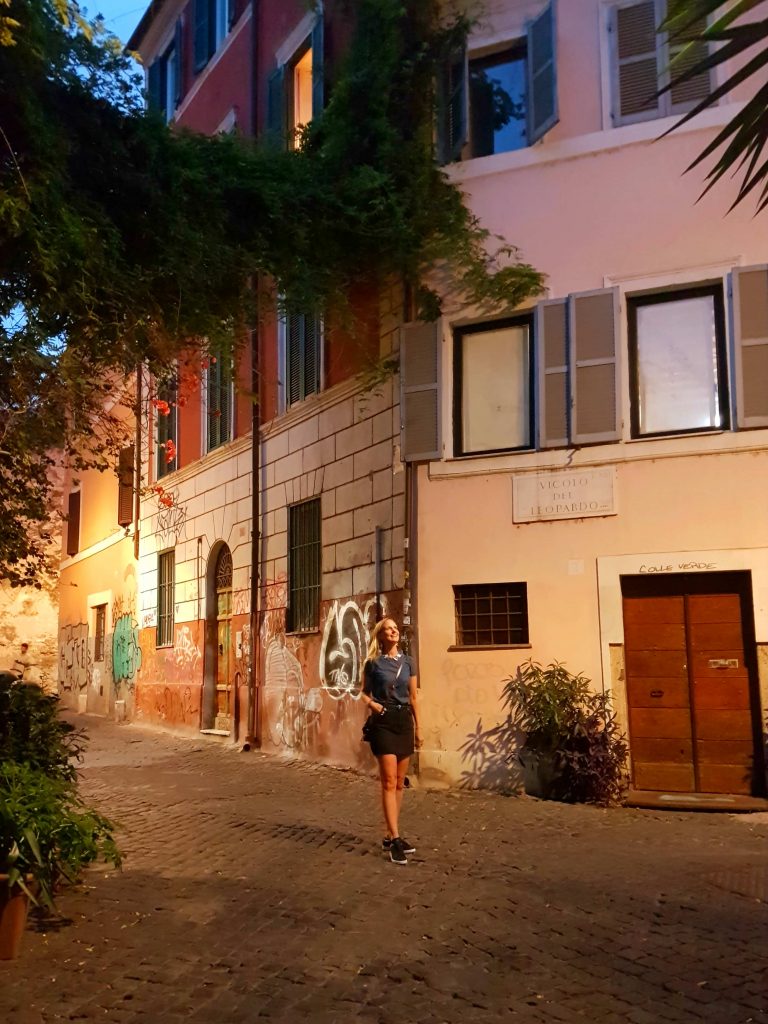 The brainchild of Edoardo Fraioli, the restaurant is a real start-up in the contemporary sense of the word: it occupied a pop-up shop at Eataly for seven months and even had a stall in a bookshop in EUR earlier this year.

It opened in vicolo del Cedro in Trastevere at the end of July, in an intimate dining space which previously hosted popular restaurants Eggs and Piano Strada. 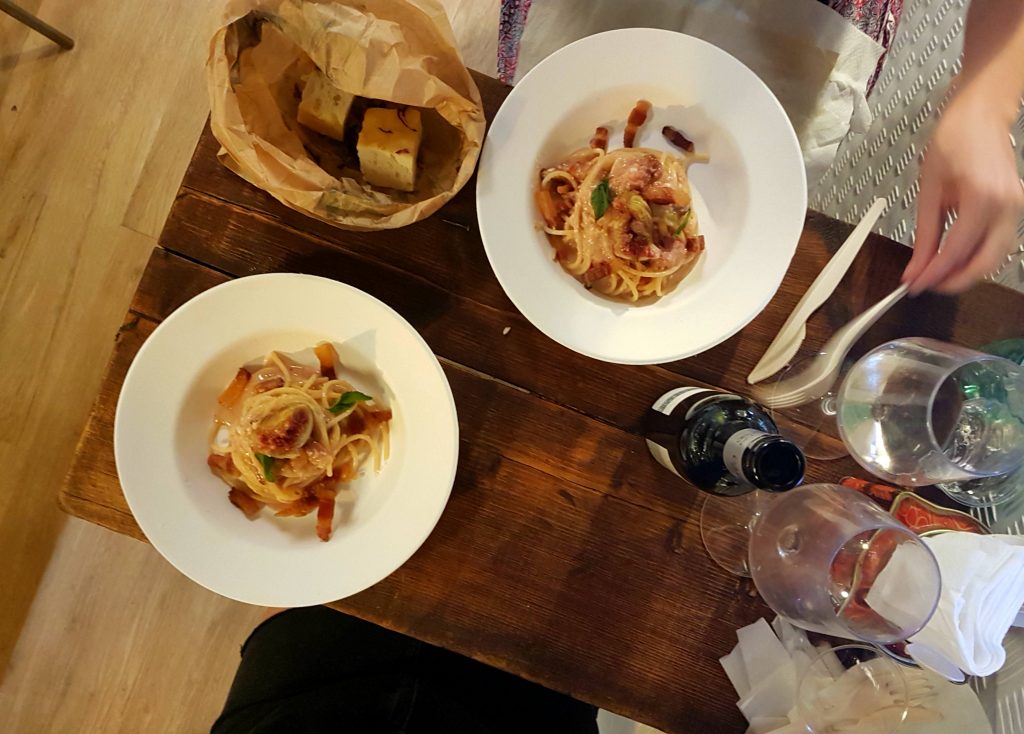 The concept is a fun one: revisiting some classics of Roman cuisine while playing with seasonal ingredients. The star of the show is the maritozzo, which gives the restaurant its name.

A maritozzo is a honey-sweetened bun with a light brioche texture, which was invented in Roman times. It takes its name from a diminutive meaning ‘husband’, as the custom was to hide an engagement ring inside a maritozzo and present it to your future bride.

if you spend much time in Rome you should try one of the old-school bars which serve maritozzi as luxurious breakfast options – literally a large maritozzo bun, sliced almost to the crust with a sharp blade to keep the edges pristine, and filled with a slab of cream which is artfully flattened with a palate knife. 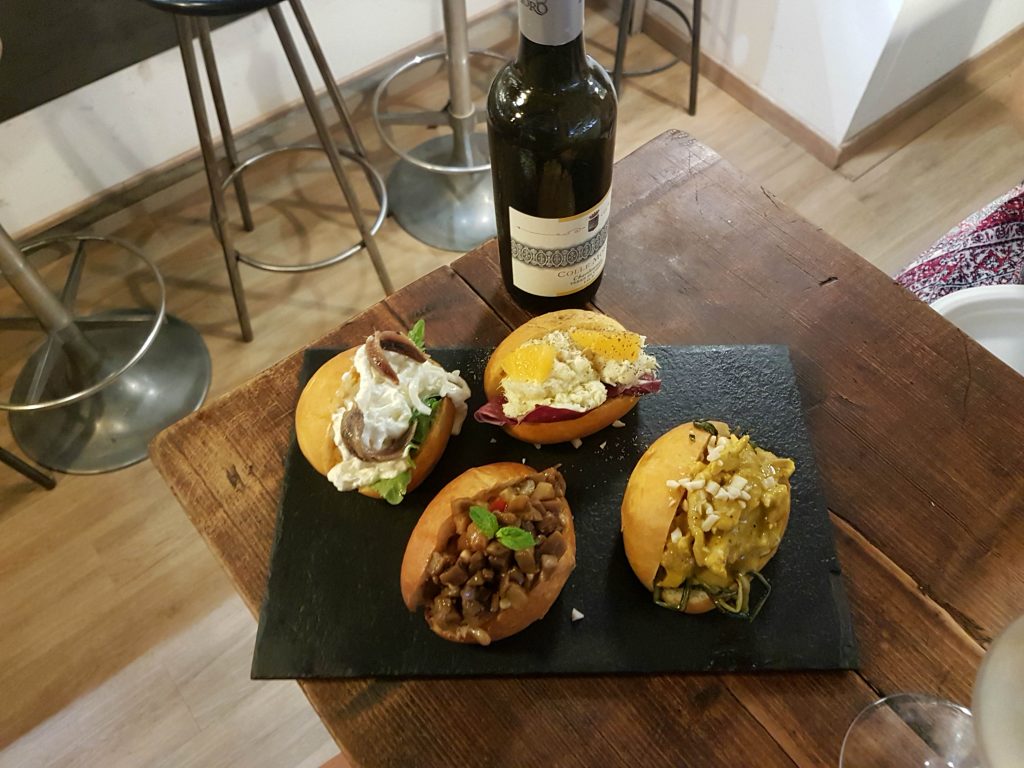 Il Maritozzo Rosso leads with savoury versions of these moreish buns, made from scratch by the restaurant.

We tried all four options on the menu, pictured above. Clockwise from top, they are filled with: baccala, orange slices and radicchio; chicken curry with refried greens: Sicilian caponata: and stracciatella and anchovies.

You can order small, ‘aperitivo’ sized buns (as we did above) for around €4 or full sized ones – which are frankly, big enough for a lunch – and which range in price from €6-€8. These are excellent value and make a great lunch or aperitivo option if you’re in the area. 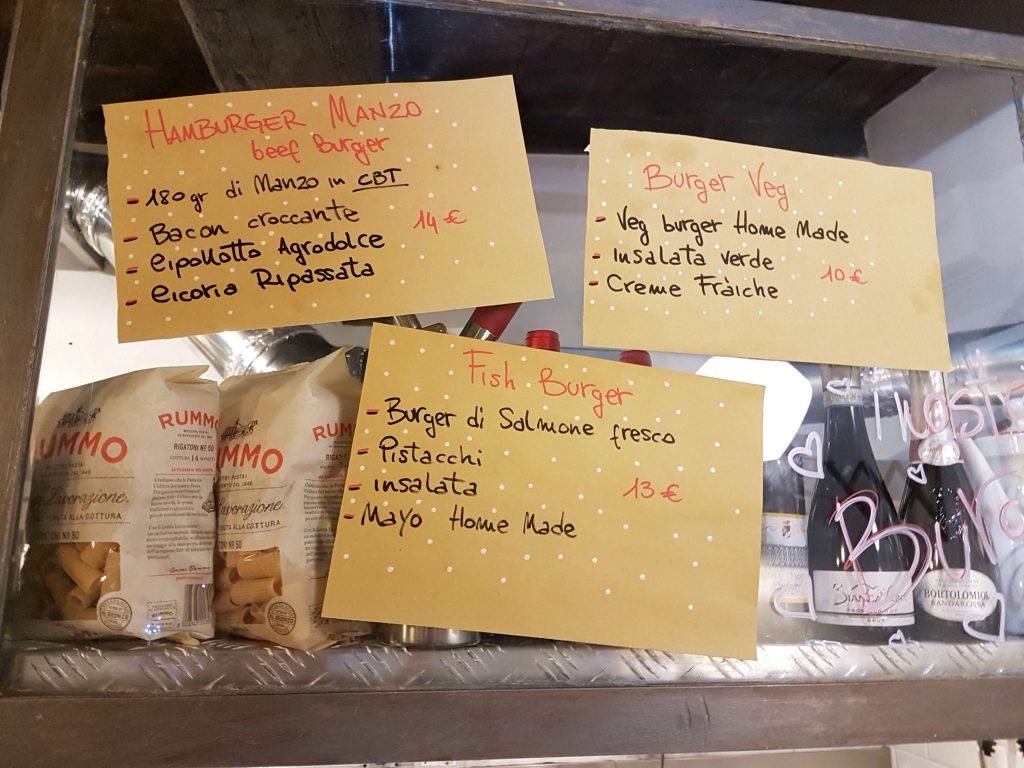 We didn’t have time to try everything on the board but I was happy to see that there are a range of burger options on the menu priced from €10-€14. I would be keen to go back and try one. 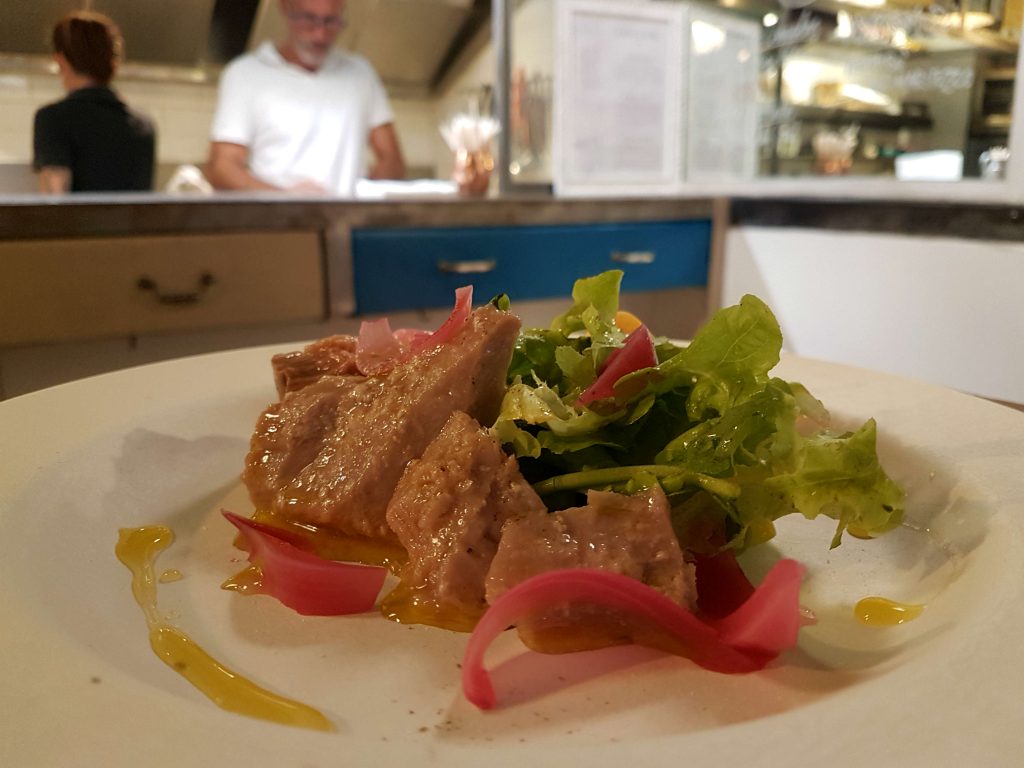 An interesting thing about this menu is the fact that maritozzi aren’t the whole story here. We next shared a plate of tuna, cooked sous vide – the fashionable, low temperature cooking method which retains moisture and promotes tenderness. 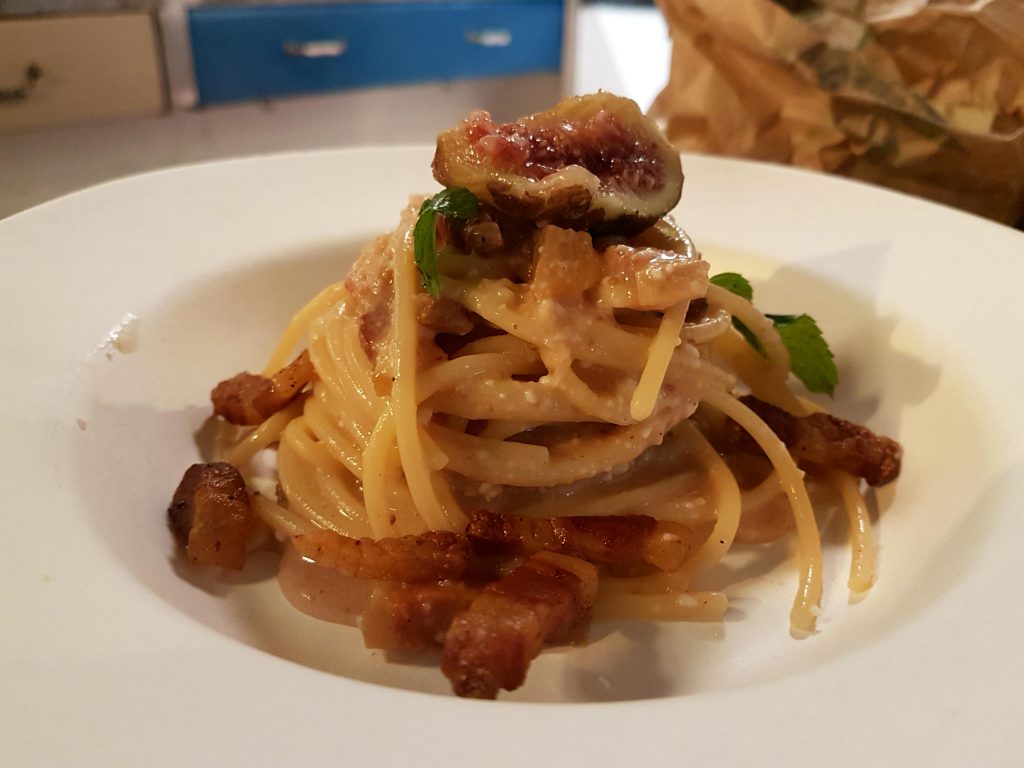 Next up, we were served a rather wonderful spaghetti alla gricia, a typically Roman dish made from pig cheek and pecorino cheese. This wasn’t the usual classic of Roman cuisine however as it was cooked in the pan with fresh, seasonal figs, which added a caramelised sweetness. Absolutely super. 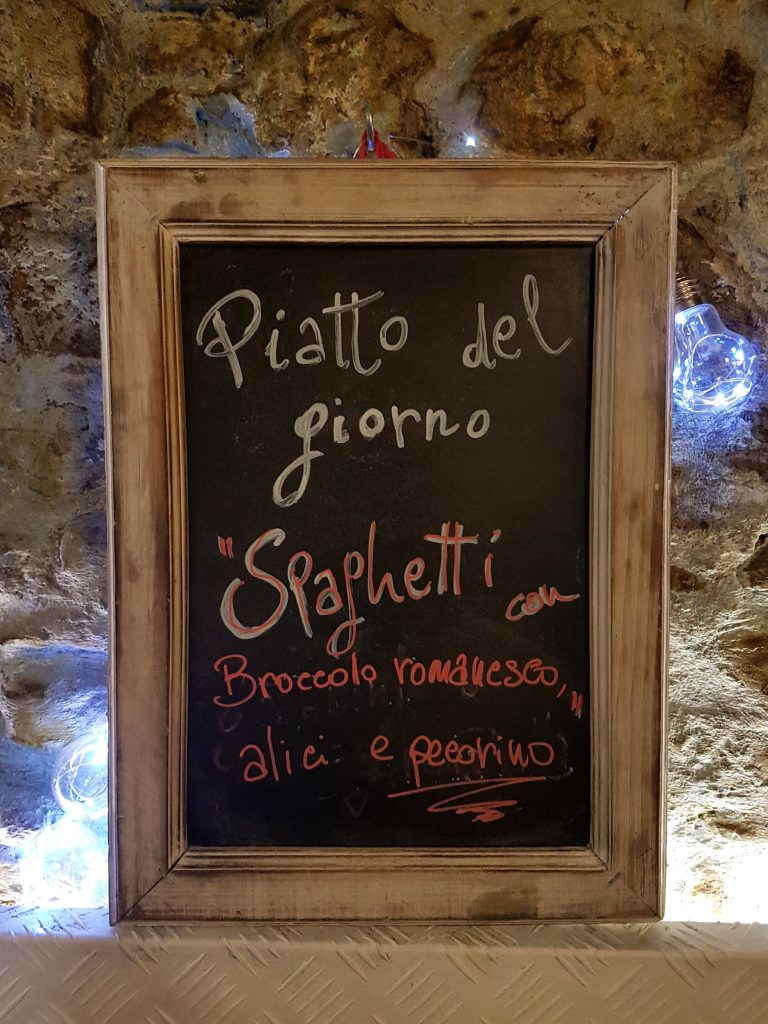 Pasta dishes here cost €10-€13 and also include old-favourites such as carbonara, cacio e pepe plus a couple of extra seasonal dishes of the day. 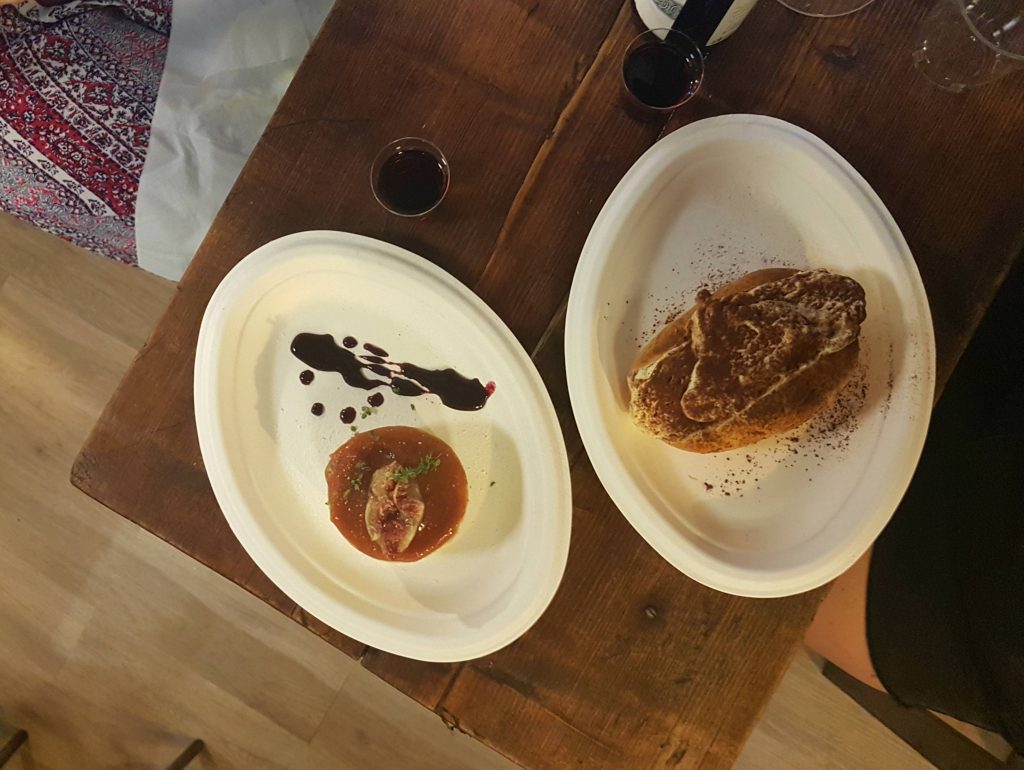 We couldn’t skip dessert and tried a fresh fig and fig compote cheesecake, plus a maritozzo filled with tiramisu. Make sure you leave space for these as they are definitely on the filling side (that tiramisu could have fed two!). Desserts cost €6.

The wine list is limited, but includes local red and white vintages, with a bottle setting you back €18-€20.

If you hate making decisions, and you’d like to try a bit of everything, they offer interesting set menus priced at €35 which include a mini-maritozzo, a pasta dish, second course and dessert. The whole package is pretty good value but excludes wine. 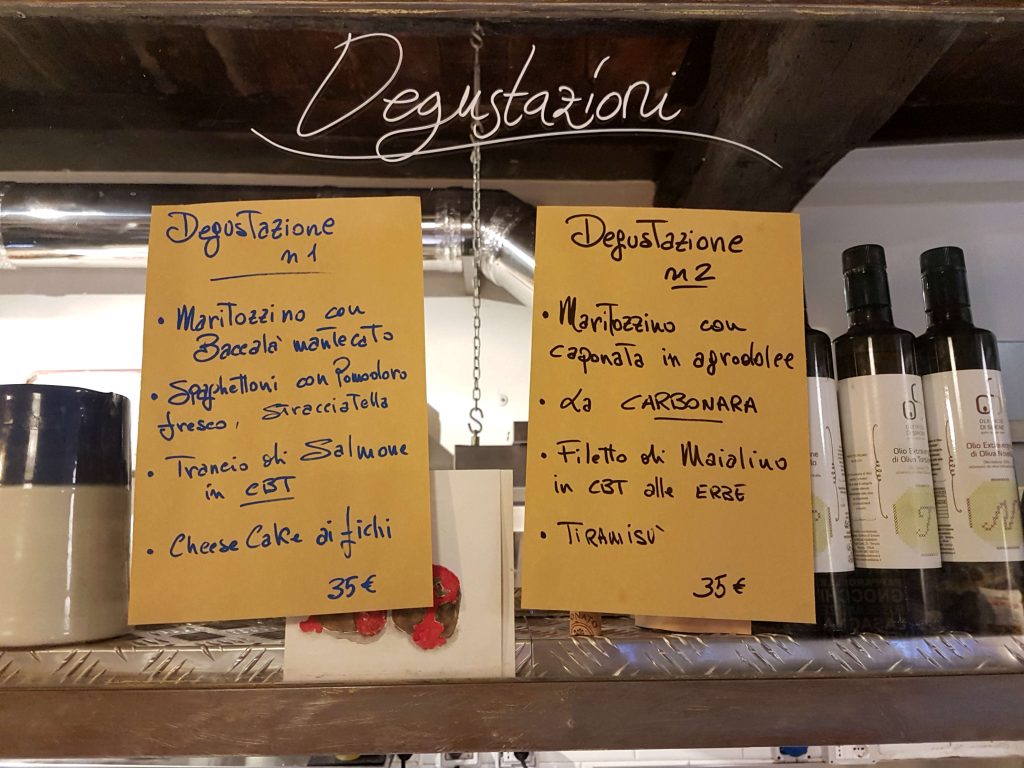 All in all, this was a really fun experience. The food is serious while the surroundings are informal, just how I like it. However, I do prefer to dine with real cutlery and don’t enjoy drinking wine out of a plastic glass, which for me is the only negative note.

Testaccina was a guest of Il Maritozzo Rosso Bistrot