Be enchanted by Banchina 63, new fish restaurant in Rome

There’s something faintly Parisian about this quarter of Rome – the location for new fish restaurant Banchina 63 – with its leafy boulevards and turn-of-the-century apartments.

The pavement broadens a little along this quiet street in Prati, setting Banchina 63 back from the road and creating a pleasant pavement cafe vibe in front of its glossy windows.

It’s a cellar bar and restaurant, but only just – take half a dozen steps down into Banchina 63’s well-lit and naturally luminous interior and absorb the pleasing sight of an expert chef handling raw fish, the handsome bar area and carefully spaced tables, all dressed with a nautical touch.

Banchina 63 boasts one of those sweet-shop-emporium bars which makes you want to sit there for a long time and challenge the expert baristas to pull down jewelled liquors and mix up a treat. Indeed, look out for the cocktail of the day, and trust in their expertise. 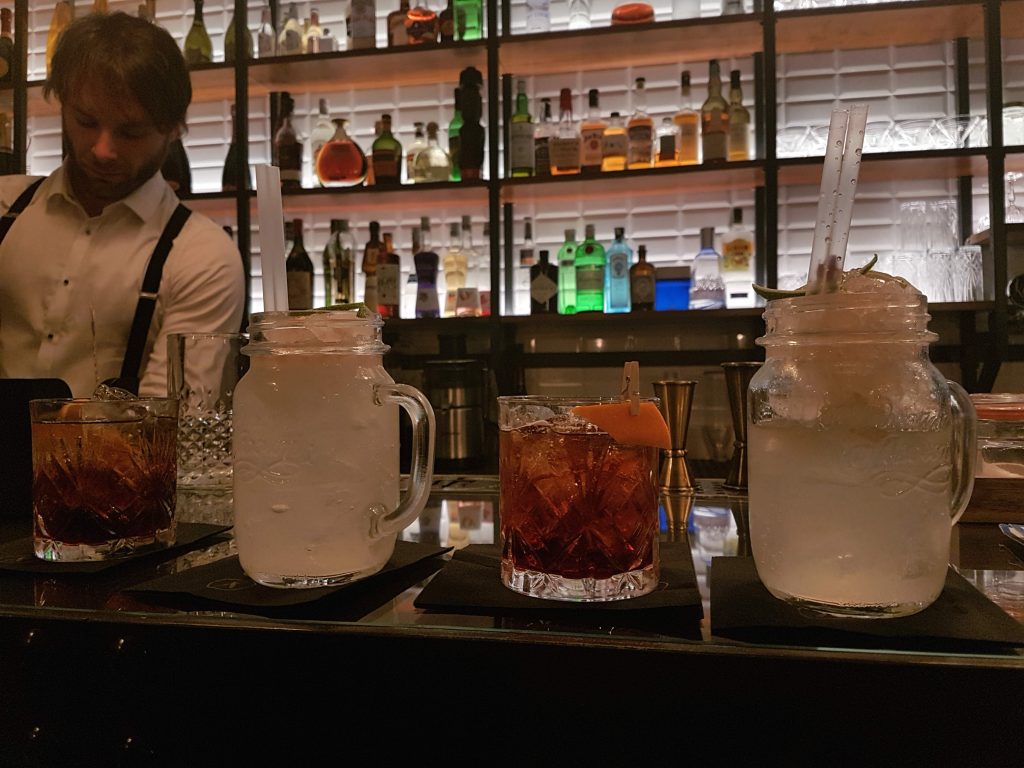 I tried a variation on a Negroni, but there was also a tangy Moscow Mule on offer that night which was probably an even better match with the fish.

But we were here for the food, and the sushi and raw counter were as tempting as a temple of Turkish delight, indicating one of this restaurant’s specialities – fusion dishes and raw seafood. 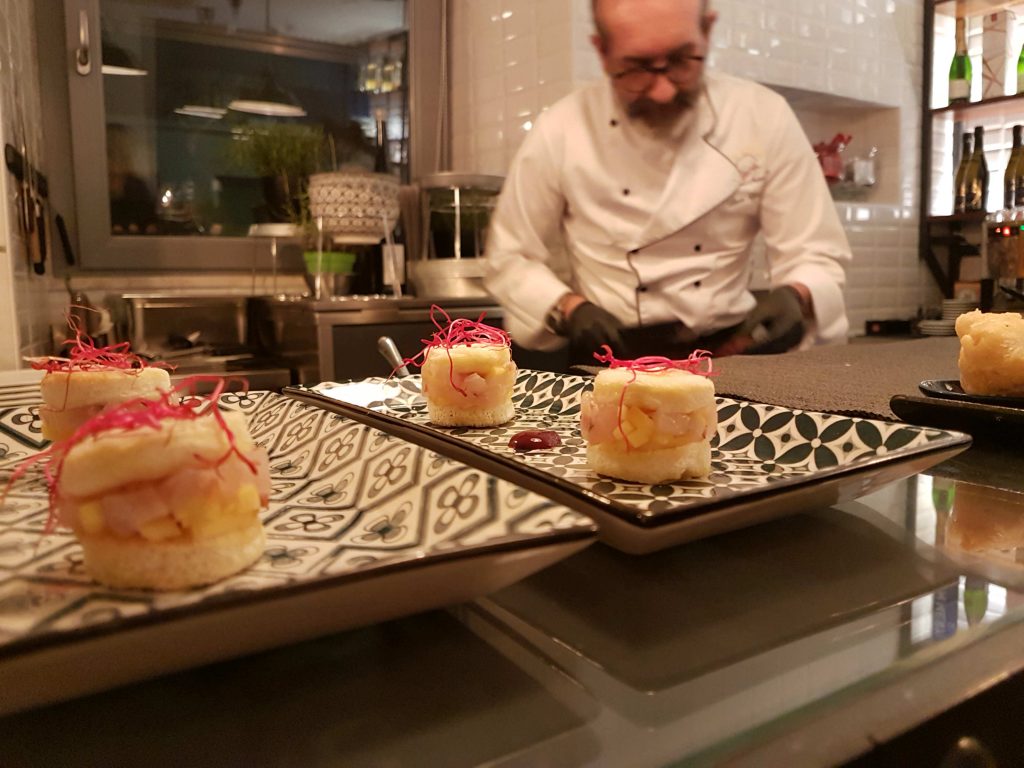 We started with a selection of raw tasting dishes which set things up for an extraordinary night.

These choux pastry mouthfuls, filled with creme fraiche and topped with a single, raw prawn, were a triumph of simplicity and sweetness. 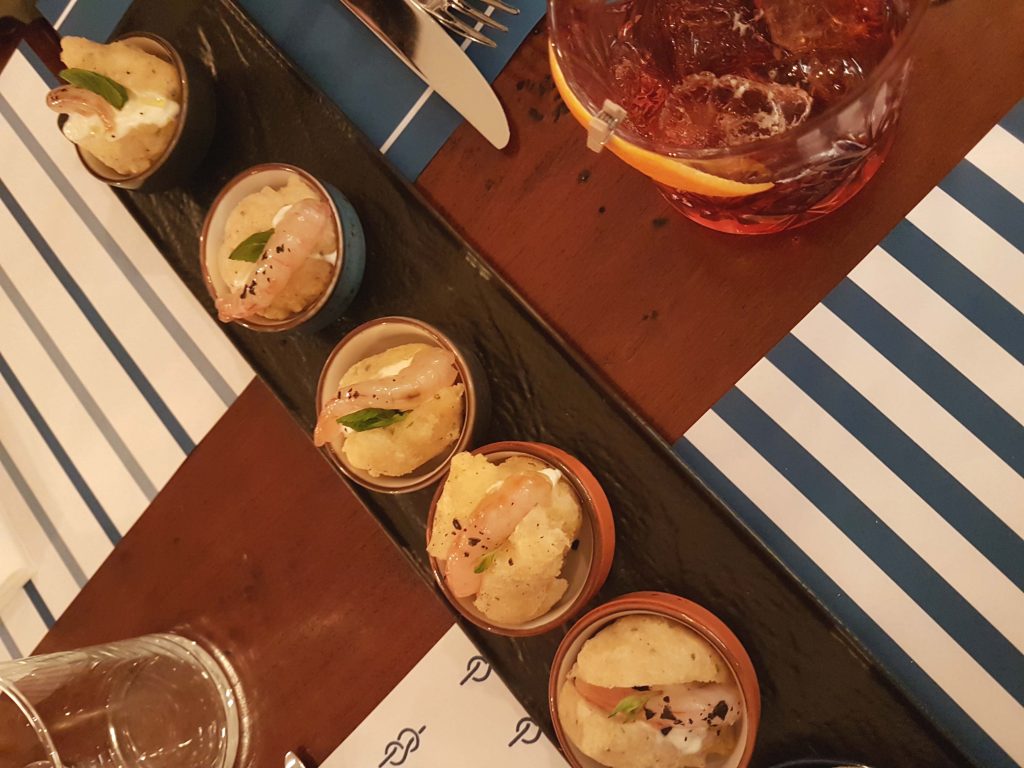 If you’re a fan of oysters, meanwhile, you won’t be disappointed. There’s a handsome selection, impeccably sourced. We were served a single oyster with a briny helping of tuna and salmon tartare and a tarragon and red currant sauce. 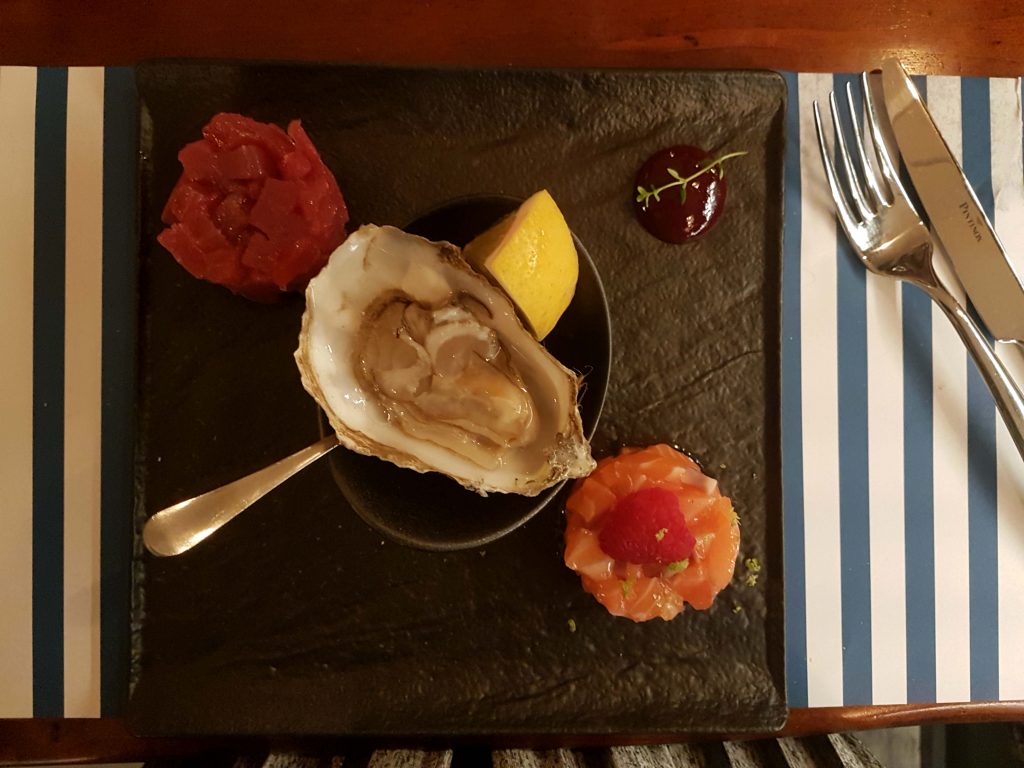 The fish cakes have little in common with the potato heavy and fish-remnant affairs you might find in other restaurants. The freshest quality white fish is breaded and gently fried for an excellent, tender bite. 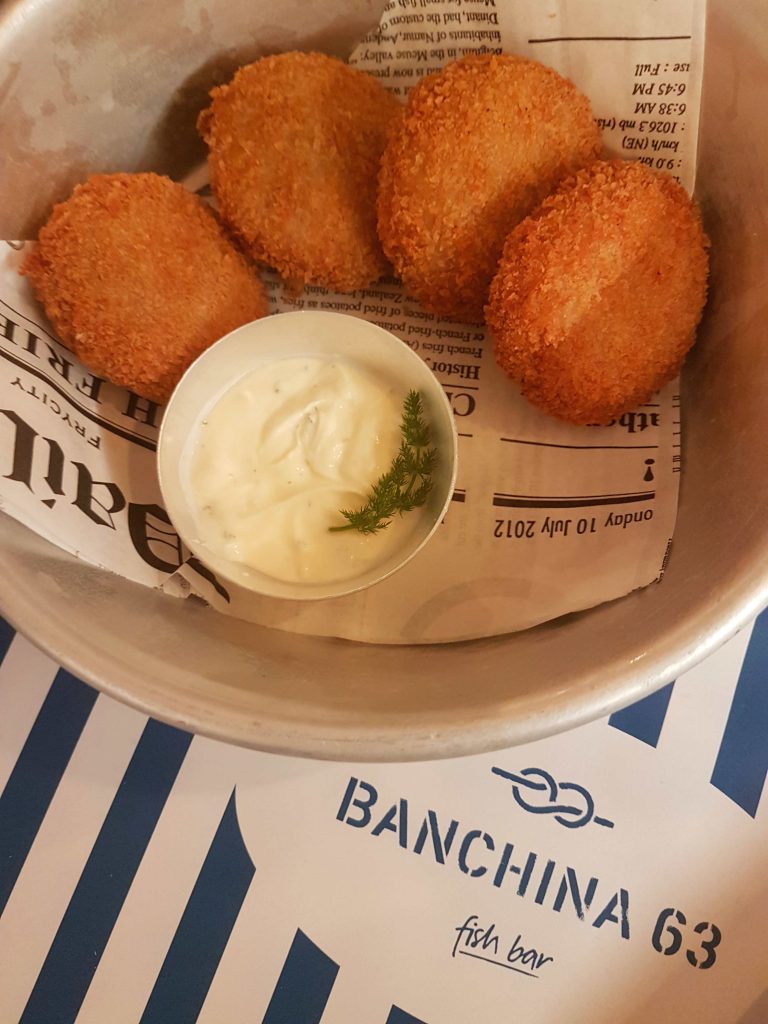 Next, these raw red prawn beauties, served with a smear of squid ink and rock salt. If you like raw fish and the simplest of flavours, you are going to love this place. 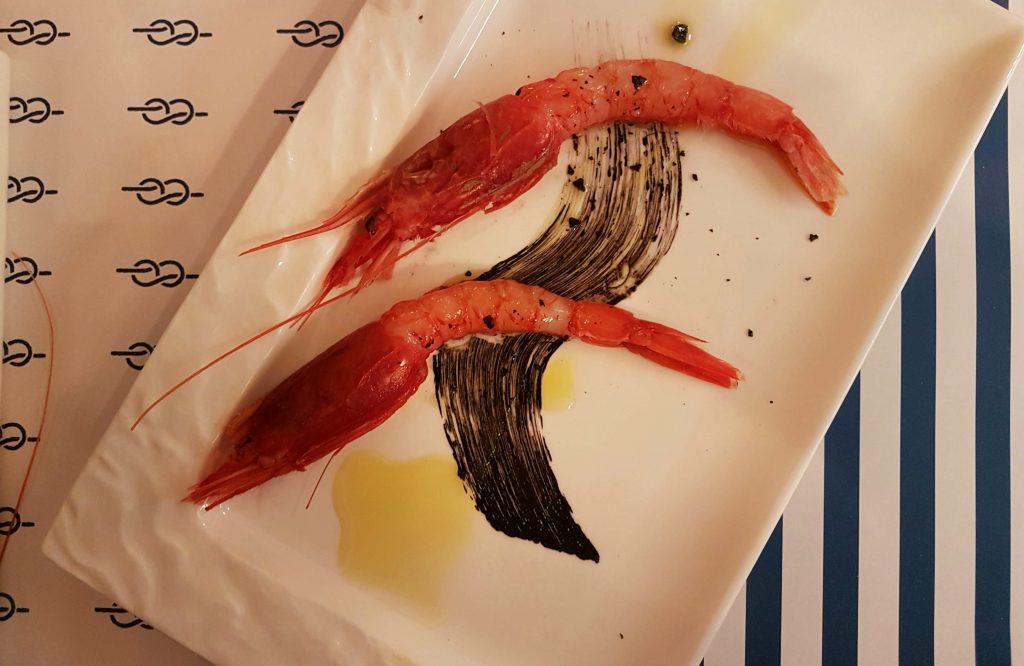 A word about the neighbourhood: Prati has really upped it’s restaurant game in recent years, flooding this richly diverse riverside district with a range of dining options that suit it’s unpredictable population.

From well-to-do local families and young people, to its daytime community of lawyers and business folk with a healthy budget for lunch, Prati’s primary population is Roman in origin. But this strategically located neighbourhood – which boasts the Vatican at one end and a bridge into the heart of Rome’s shopping, via del Corso, at the other – is also an important thoroughfare for tourists and pilgrims. 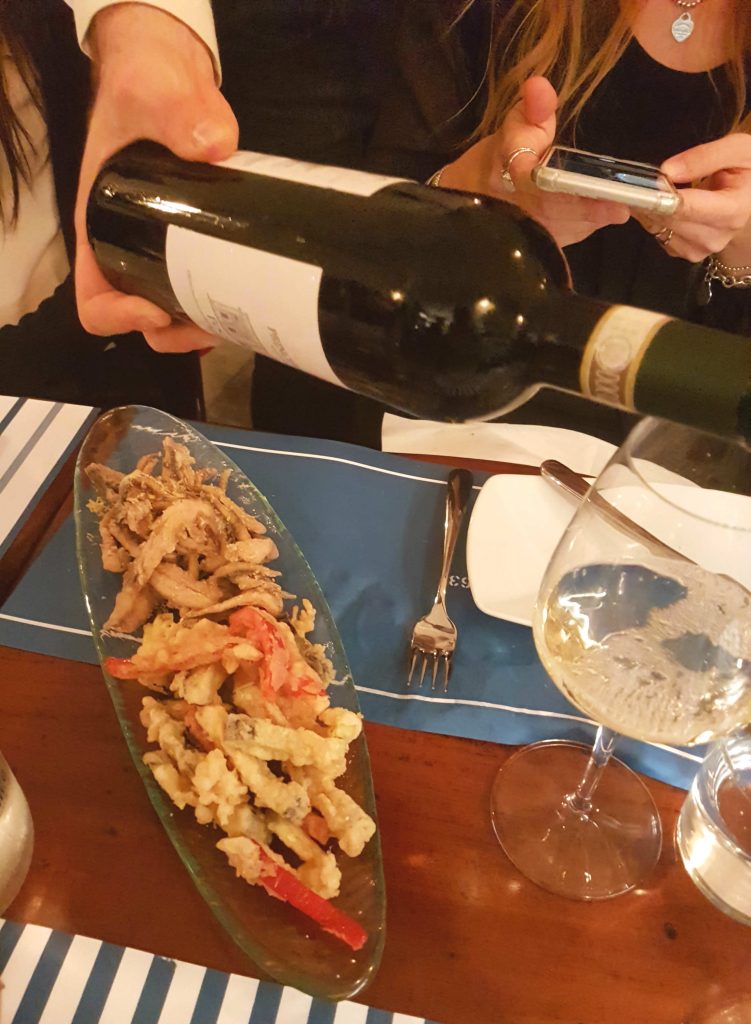 There was still the pasta course to come, and we weren’t disappointed. The Italian classic poor dish of butter and anchovies took on a sumptuous aspect, while the right balance of salt and acidity cut through the fat. 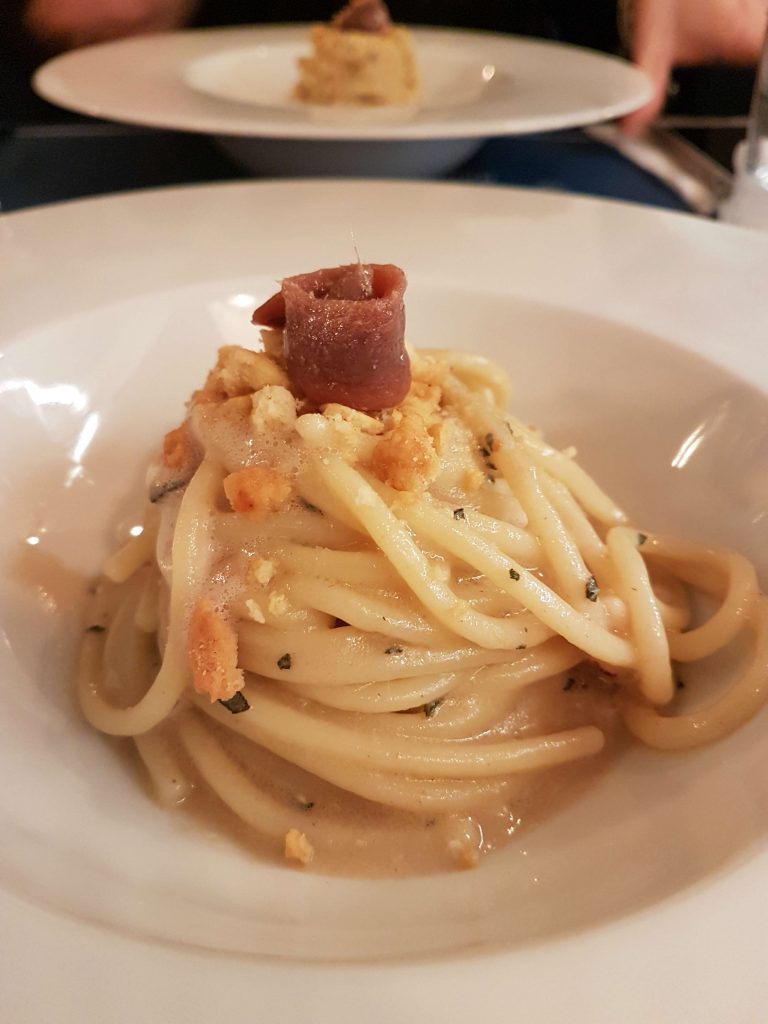 It only remained for us to be wowed by the dessert course – and in this, we weren’t disappointed either. Crisp yet chewy dark chocolate homemade brownies, served with a rose of fresh cream, proved the perfect combination of luxury and simplicity. 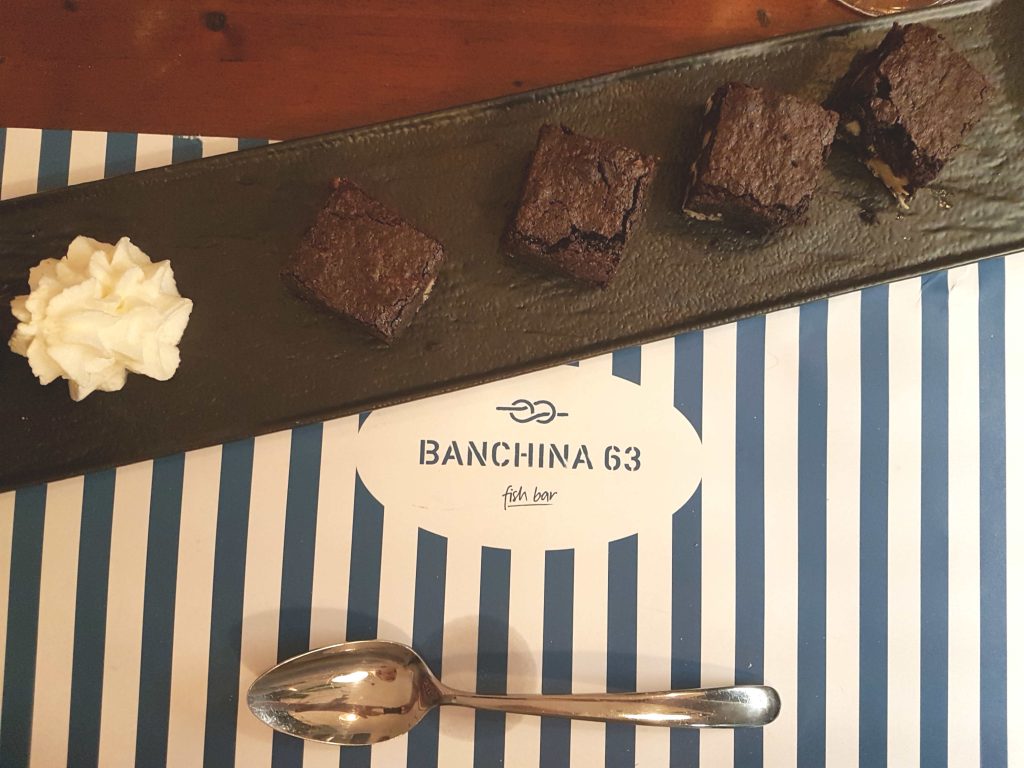 Expect a refined crowd at Banchina 63, although this restaurant is something of an easy affair in its class: no stiffness, no pretension. Antipasti dishes start at €10, pasta courses cost around €14, including risottos, while expect to pay €16 – €18 for second courses. Wine is available by the glass, starting at a very reasonable €6 for the quality and favouring Italian wines.

Banchina 63 is a further proof that fish doesn’t just have to mean white tablecloths and complicated seafood rigorously served with white wine – sushi and a negroni or a portion of fish cakes with a glass of a local vintage is also a fine night out. You can even come for an aperitivo at 6pm and make the most of the cocktails on offer – combined with a few handsome nibbles.

Read next: Three fantastic places to eat fish in Rome