From streetfood to restaurant, l’Apulia finds a home in Rome’s San Lorenzo district

Those of you that follow my Instagram account will know that I’m a huge fan of Puglia or Apulia, one of Italy’s southernmost regions, and home in fact to the boot-shaped peninsula’s recognisable spur and heel.

Thanks to my Puglia fam I spend a lot of time there, so was delighted to hear that Puglia was coming to Rome, in a very real sense, with the opening of L’Apulia, an osteria in Rome’s San Lorenzo district specialising in Pugliese food.

But the l’Apulia story is more fun than a simple regions-to-Rome tale. In fact, the l’Apulia brand has spent the last few years literally touring the capital and beyond with a street-food truck, popping up at festivals and events right across town.

The brainchild of Valentina Toppani and Domenico Coppola, the first l’Apulia ape-truck opened the shutters in 2015 and quickly became a firm favourite at festivals for a carefully selected range of quick bites. 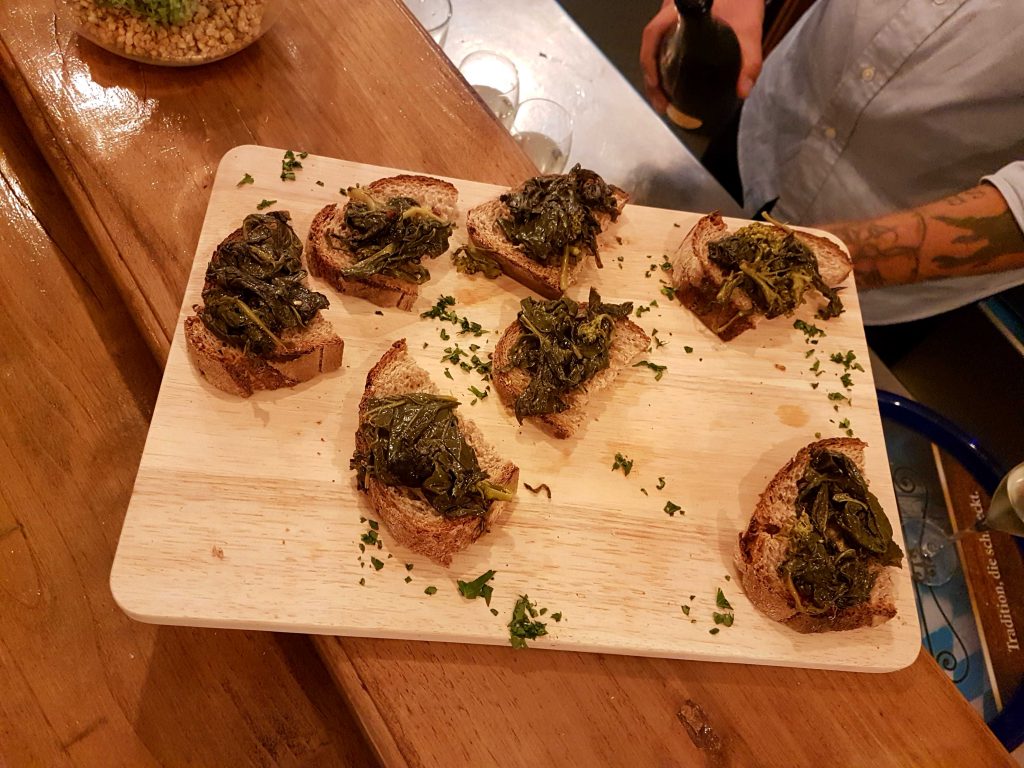 After building a loyal set of followers in particular for its signature octopus sandwiches – which are prepared in 13 different ways – the brains behind l’Apulia decided it was time to put down some roots and expand into a restaurant location with a street-facing takeaway counter.

While you might find Italian osterias overseas to be elegant affairs, it’s worth remembering that this kind of eating place started as a wine-only spit-and-sawdust joint, simply selling booze, where punters were expected to bring their own morsels of food. 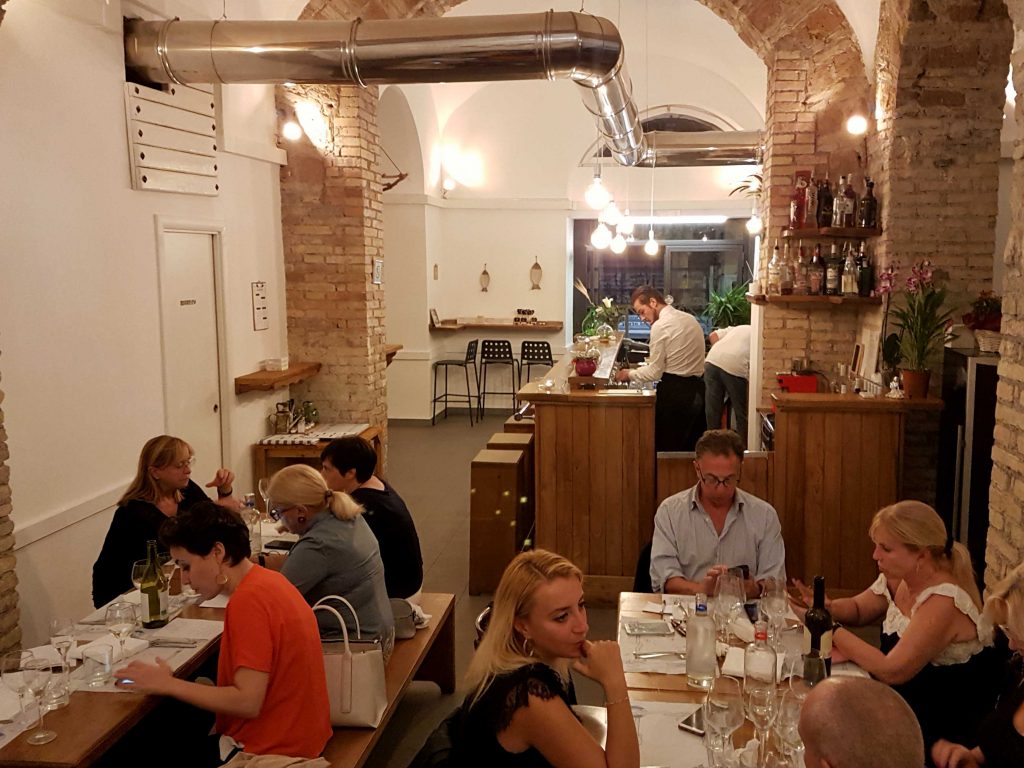 Osteria traditions have vastly changed in modern times, but a true osteria should never forget its humble origins, and indeed the interiors of l’Apulia keep it pleasantly simple.

Whitewashed walls recall the treasured Puglia seaside towns of Ostuni and Polignano al Mare, while the wooden benches and homely counter have a reassuringly traditional vibe. 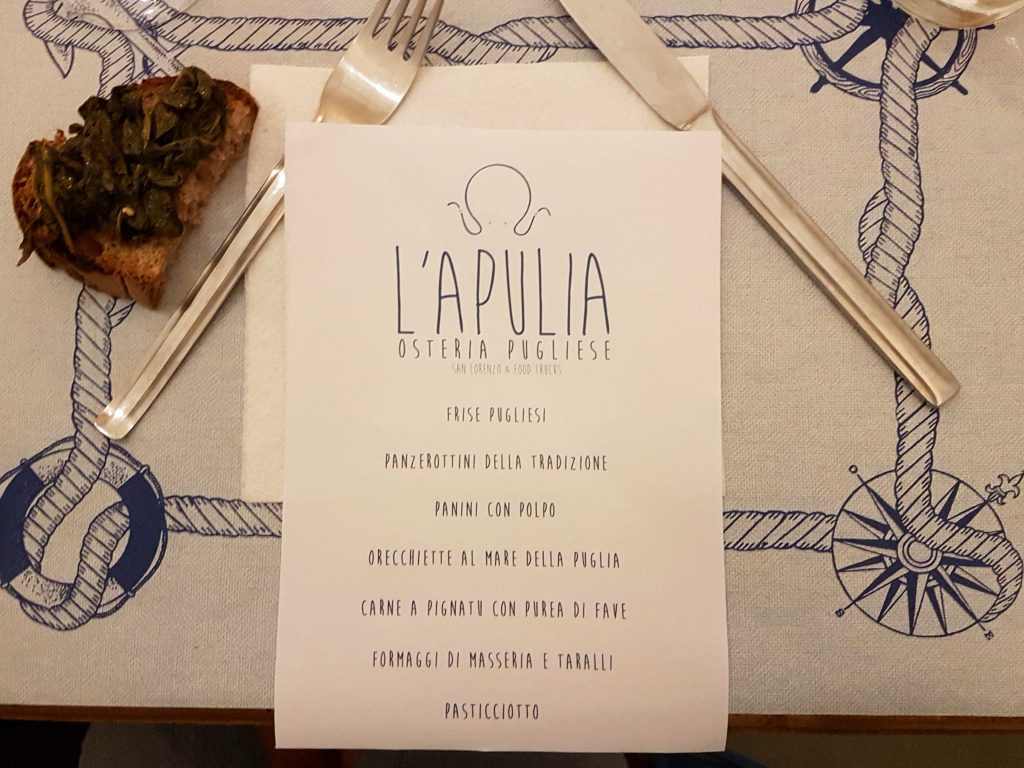 Severed cactus leaves provided a frieze along one wall, where there are also a few more tables down an L-shaped annex at the back beneath wine-laden shelves.

We ate a sample menu which featured a few of the house specialities, to get a good feel of the available dishes. As well as being able to sit down and lunch or dine in the restaurant, customers will also be able to grab and go street-food options from a hatch directly on the road. 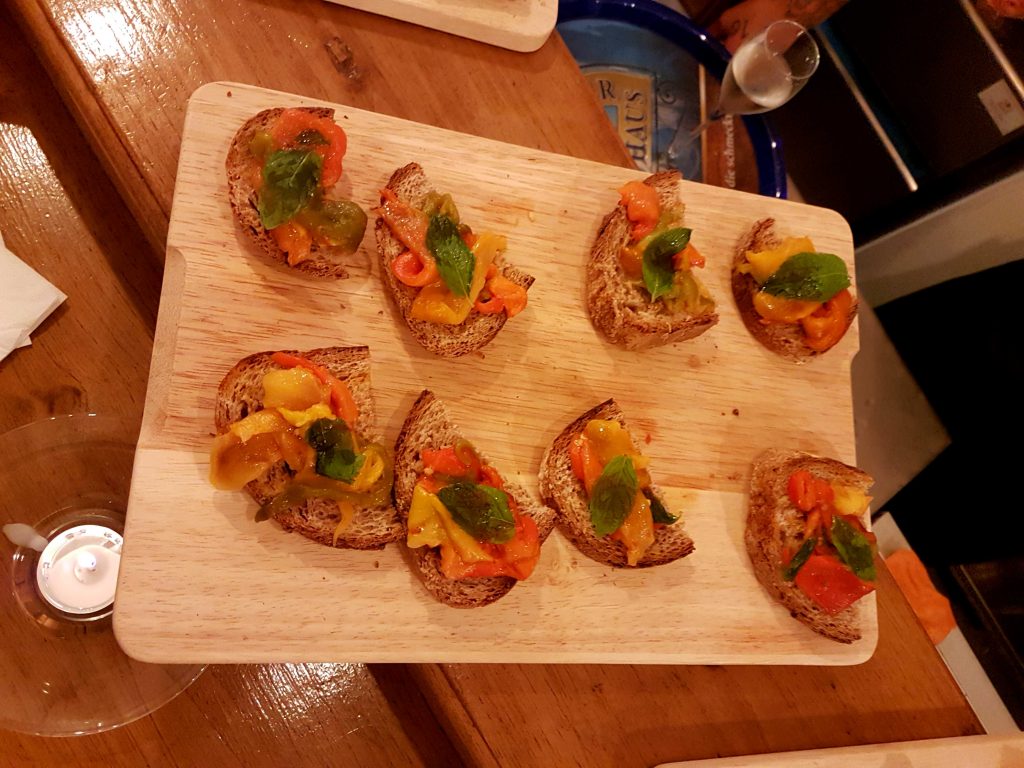 We started with a few typical bruschette featuring classic toppings such as sautéed red and yellow peppers, and refried bitter greens with burrata.

These were succulent on dense, wholemeal rustic wedges of bread. 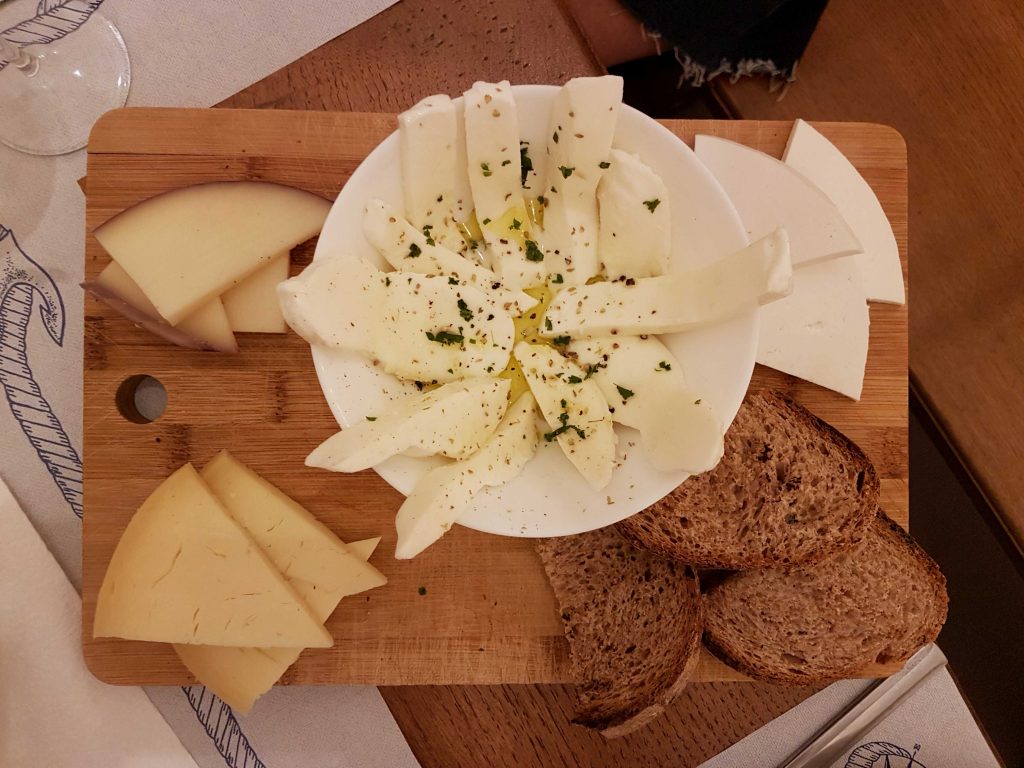 We then sat down to sample a delicate selection of cheeses, which can usually be ordered accompanied with frise, the typically Puglia flour and water biscuits which are softened with water before toppings are added.

Next it was the turn of the panzerotti, crisp, deep-fried half-moons filled with melted cheese and hot tomatoes. These are always tasty but the fillings could have been a bit more generous, and the fry could have been a little dryer to the touch. 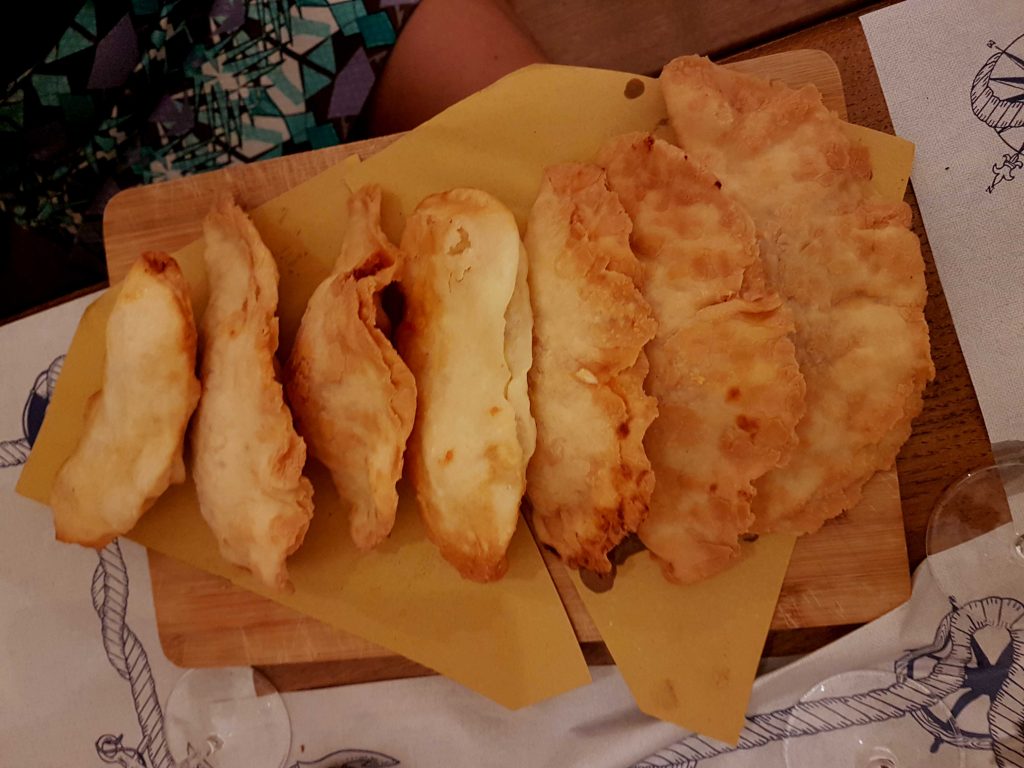 It wouldn’t be a l’Apulia experience without a signature octopus sandwich. We tried a version with a crisp, what seemed to be an unleavened bread, grilled octopus, burrata and refried bitter greens.

This was extremely tasty, although the fibrous greens, slightly rubbery octopus and crisp bread proved quite a mouthful. 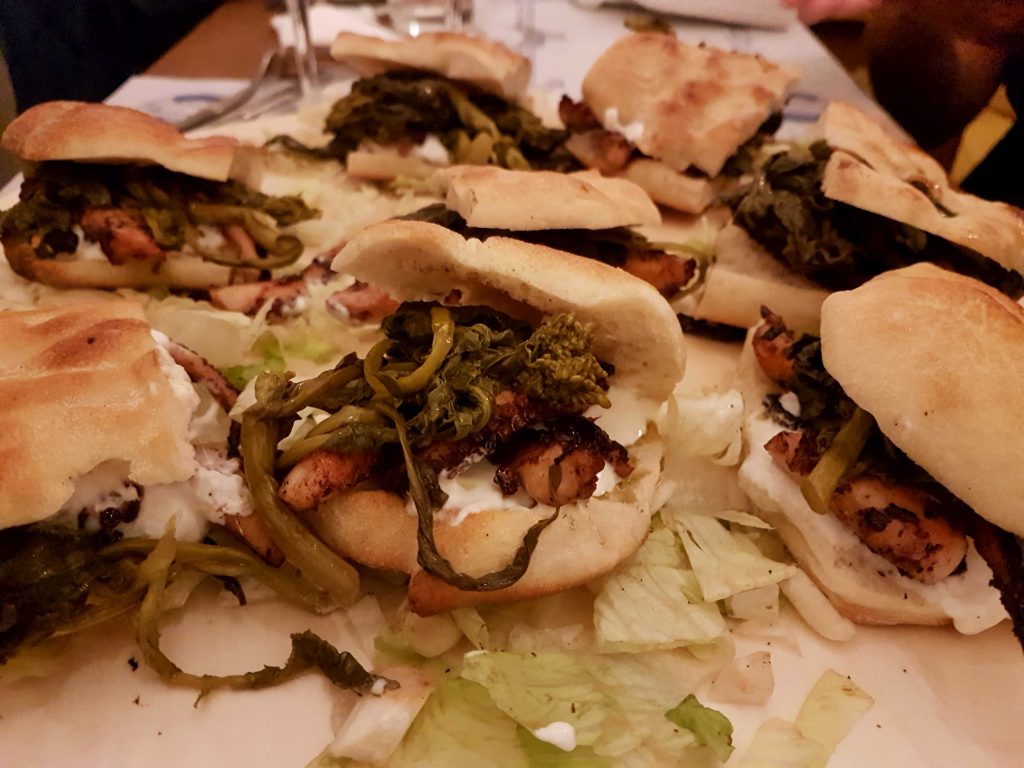 It was time to move onto the pasta course, and what else but orecchiette, the typical Puglia flour-and-water pasta shape which resemble small ears (they actually look a bit more like shells).

These were tossed with some wonderful fresh seafood, including pink prawns and clams. This was a light but tasty dish and really showed what the osteria could do once it dared to step away from its street food staples. 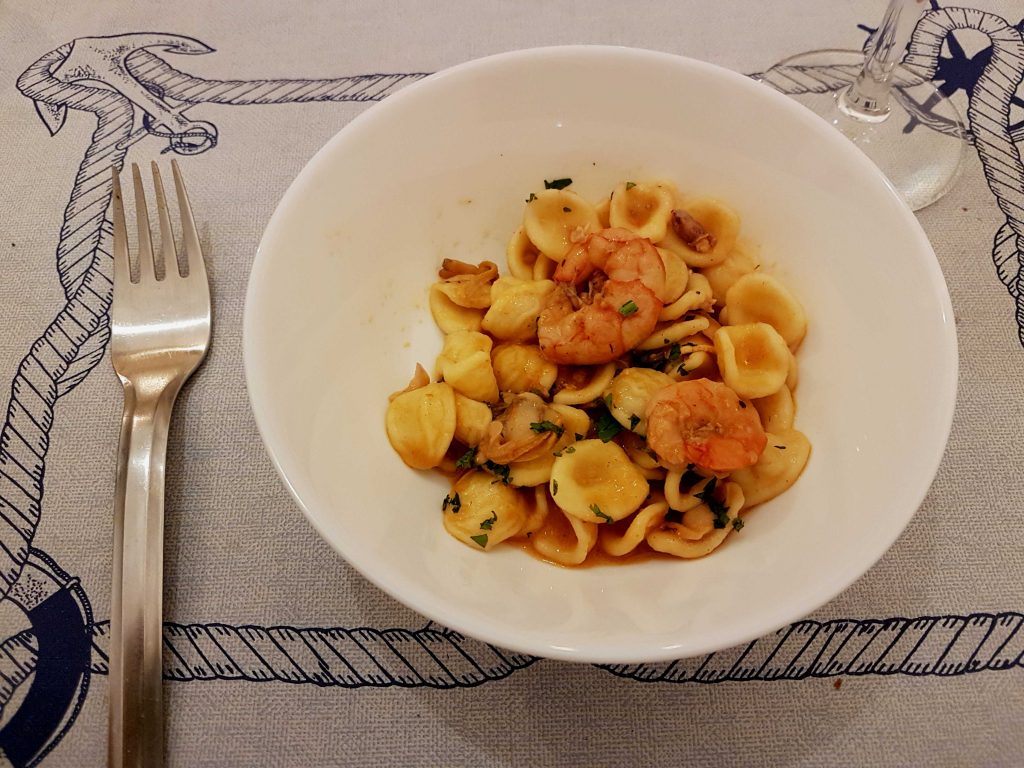 Next up, we tried a meat dish – a succulent beef stew with fresh tomatoes, known as carne a pignatu. This was served with a puree of fava beans, a lovely combination of flavours. 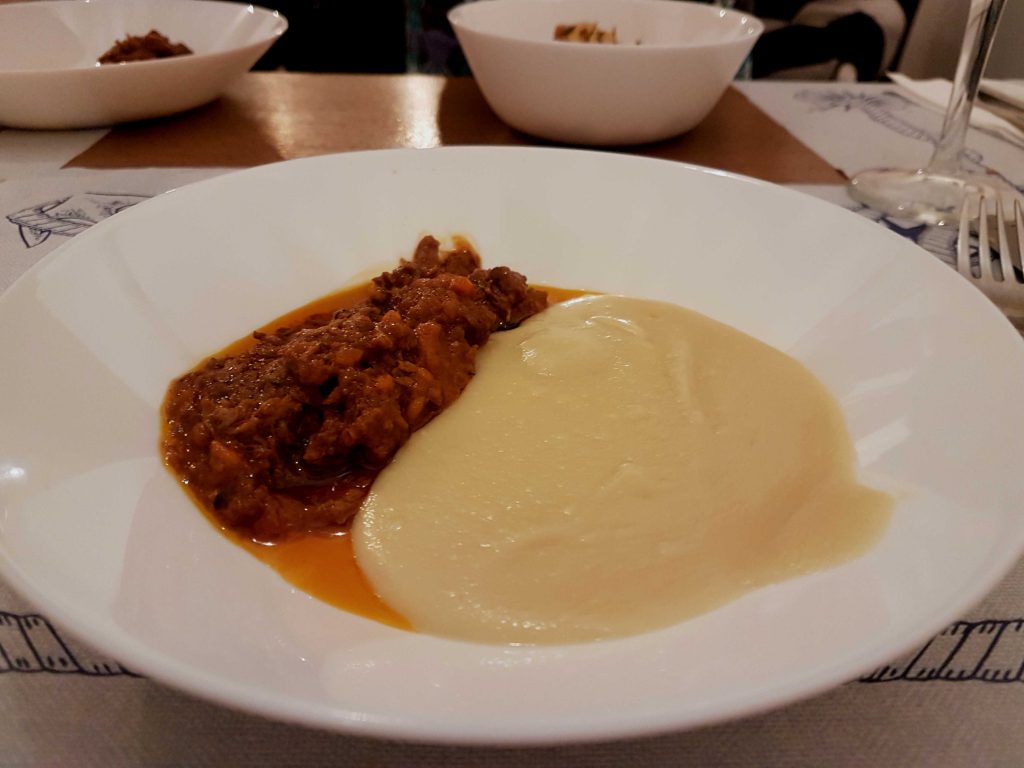 We couldn’t leave without trying dessert and were treated to a slice of cake referred to as a pasticciotto on the menu, but slightly closer to what my fellow Brits would call a Bakewell tart, contrasting jam with almond paste.

The shortcrust pastry was freshly baked, yielding with a moist crumble under the fork. Pasticciotti are usually individual, highly fragrant pastry tartlets found in most good bakeries in Puglia. 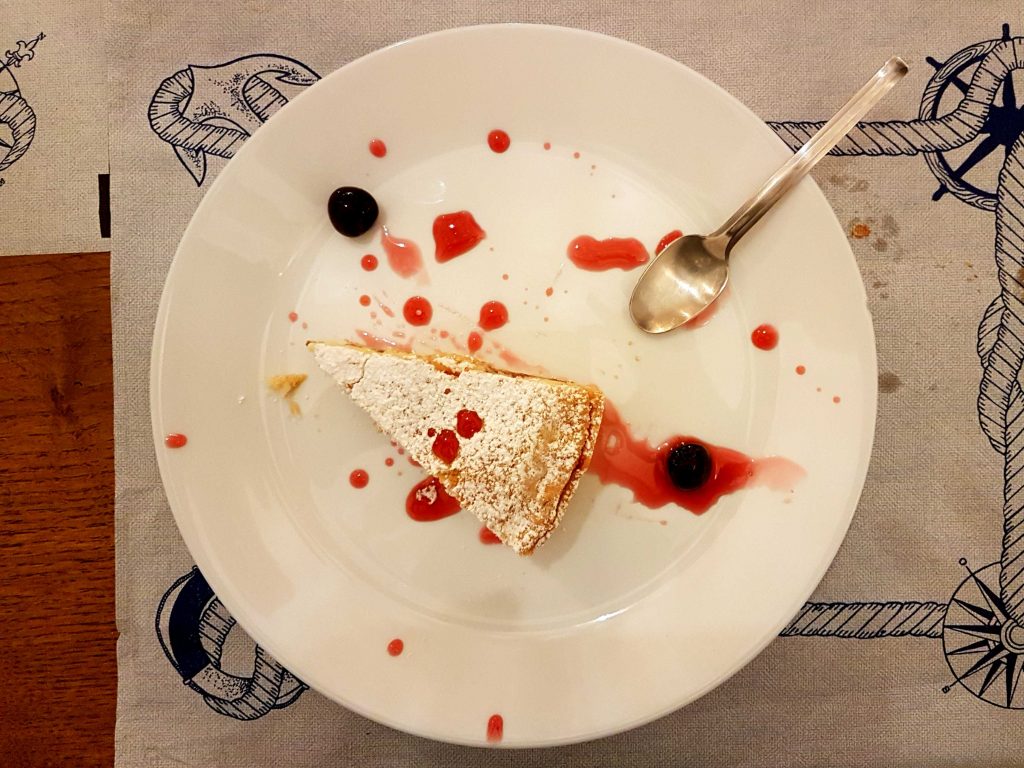 Overall, it was a fun experience and the informal, street-food focus will no-doubt be a hit in studenty San Lorenzo. The l’Apulia team is still playing to its strengths with plenty of street-food items on the menu, but I really enjoyed the food when they ventured towards more trattoria fare. 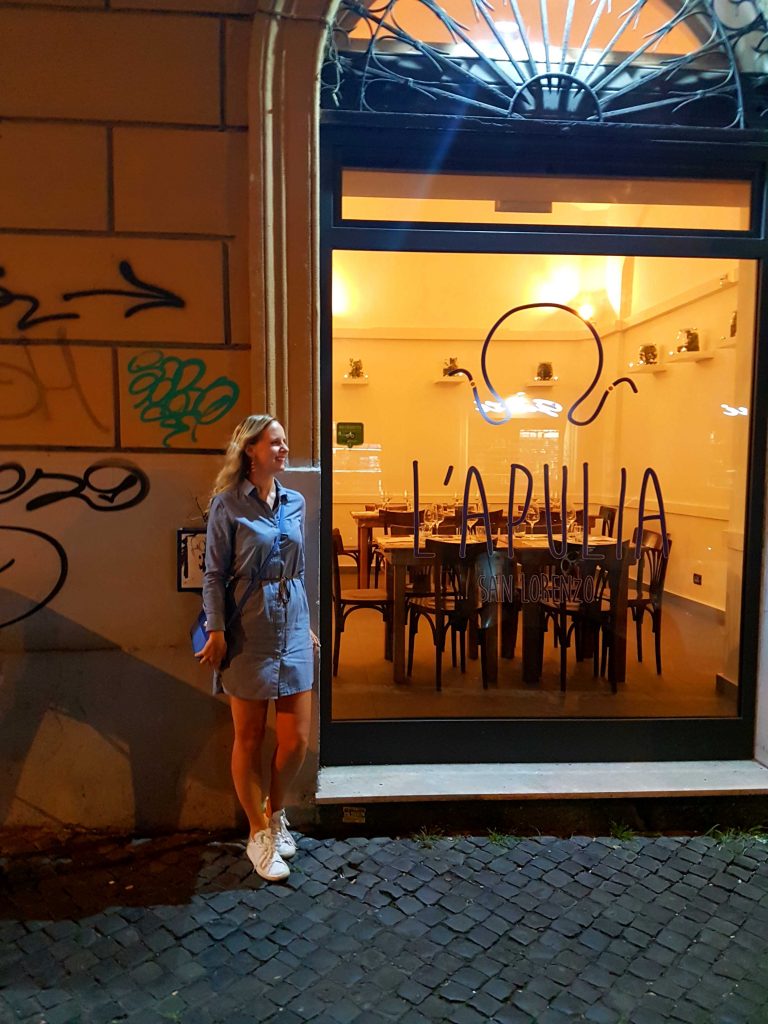 I would like to see them make the leap still further and bring a real Puglia restaurant experience to town, still served with the right blend of informality and home-cooked vibe.

Read next: Typical Sicilian Food: 8 Things You Should Eat Before Leaving Catania