Typical Sicilian Food: 8 Things You Should Eat Before Leaving Catania

Typical Sicilian food: 8 things you should eat before leaving Catania

Sicily is an island where everything is more intense. The wine is stronger, the sun is hotter, the sea shocks with its searing cyan lights and volcanoes feel free to express themselves. Near Catania, lava enriches the soil with mineral depths and the resulting produce is concentrated and combined in kitchens to create flavours you’ll find nowhere else.

As you might expect, long-held traditions are ring-fenced in towns and villages, just like the dialect; while you’ll see some Sicilian specialities repeat across the island, it can be more interesting to look for the differences in ingredients, names and serving methods. Catania, held prisoner at the foot of the slumbering volcano, bites back with tantalising combinations of flavour and colour. You’re never going to get bored in a city like this.

The hardest thing with writing this kind of post is choosing just a few of the incredible varieties of street food, specialities and sweet treats found in this city. (I rather suspect this story about the best Sicilian food will have a part 2!). But for now – especially if you’re just passing through Catania on the way to somewhere else – here’s my essential guide to tasting your way through an extraordinary city with a volcanic personality.

If you’re looking for a hotel in Catania – I’ve rounded up a few recommended options here. 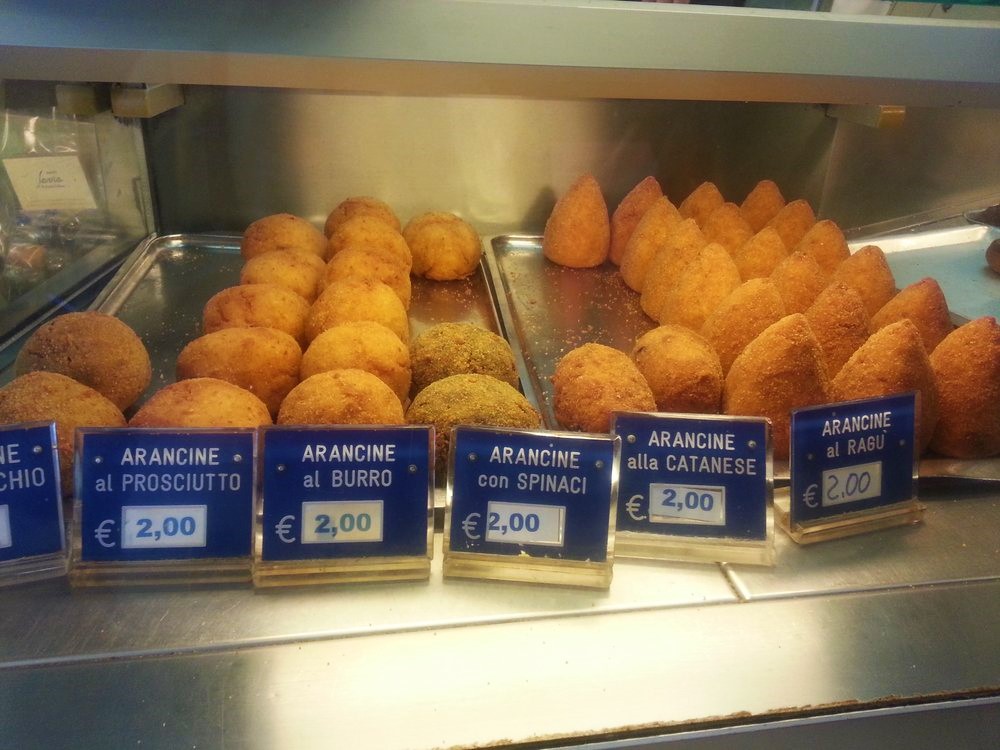 Usually called an arancino (plural arancini) in Catania and Messina, and an arancina (pl. arancine) in Palermo (although looks like Pasticceria Savia didn’t get the memo, advertising their wares as arancine – see photo), these delicious, deep fried rice balls resemble a large, golden orange – hence the name. In Catania, look out for variations made with fried aubergine, cooked ham, pistachio, tomato and meat sauce, butter or spinach. The distinctive pear-shaped forms are typically Catanese. Great for a light lunch or a mid-afternoon snack.

A traditional delicacy in Catania, horse meat is usually eaten in the form of meatballs or small steaks. My local contacts suggest going to a reputable restaurant to make sure it is actually horse meat that you’re getting. I can recommend the horse meat meatballs at L’Antica Brace, sampled alongside other grilled meat specialities.

When dining at l’Antica Brace, don’t miss their other grilled meat specialities. These include finely sliced and rolled veal cutlets stuffed with a light cream made from ground pistachio nuts and then grilled over charcoal. Just delicious.

While you’re at Antica Brace, order a cipollata, a large spring onion wrapped in a strip of pancetta (salted, cured pork). Grilling the onion brings down its bite just a notch, while the pancetta fat fuses with its aroma. Yum! 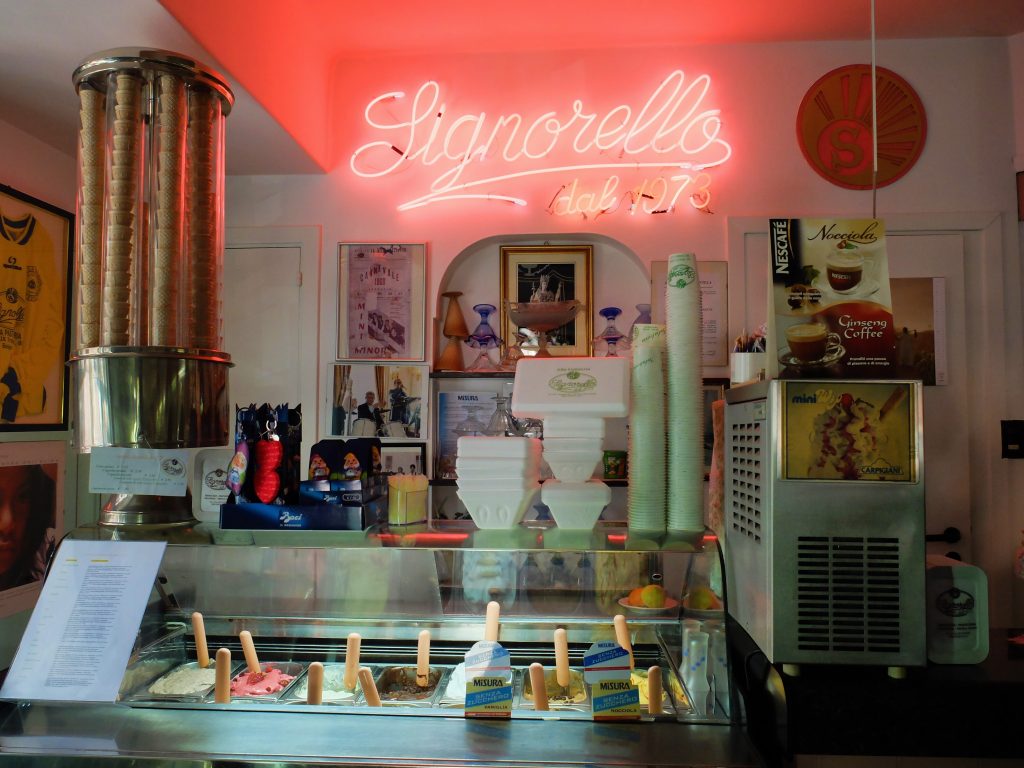 Not to be confused with commercially-sold syrup-flavoured-ice-slush, real Sicilian granita is closer to sorbet or artisan ice-cream. It’s hard to imitate as genuine products – usually fruit or nuts – are processed to a fine pulp, mixed with 15-20 per cent sugar and churned with a special machine while the temperature is reduced to around -13°C.

The sugar content ensures it doesn’t freeze solid and the granita keeps its form in the dish, even on a hot day.

The real treat here is tasting local flavours that you’re unlikely to find elsewhere: mulberry (gelsi) in particular, both white and red, which should only be available in the summer.

Look out too for truly Sicilian, locally grown options such as almond, pistachio and lemon. These delicate aromas really build when concentrated in artisan-made versions.

As well as finding good granita in the centre of town, don’t overlook the small towns that flank Etna where the almonds and pistachio nuts come straight out of the fields. I had the best pistachio granita of my life at Signorello in Etna Belpasso (pictured at the top of the post). To make a meal of it, eat with a typical Sicilian brioche.

Where to eat: Pasticceria Signorello, Via 19° traversa 80, Etna Belpasso

The traditional Sicilian cannolo (meaning tube) is one of the island’s most famous exports. Filled with ricotta blended with icing sugar or ground pistachio nuts, then dressed with candied fruit, there are also chocolate variants.

The shell is made from a lightly sweetened pastry dough that is fried to a biscuit-like crisp. Look for tubes which are filled on the spot to avoid sogginess, and creamed ricotta which has been kept in the fridge.

Where to eat: Pasticceria Spinella, Via Etnea, 298 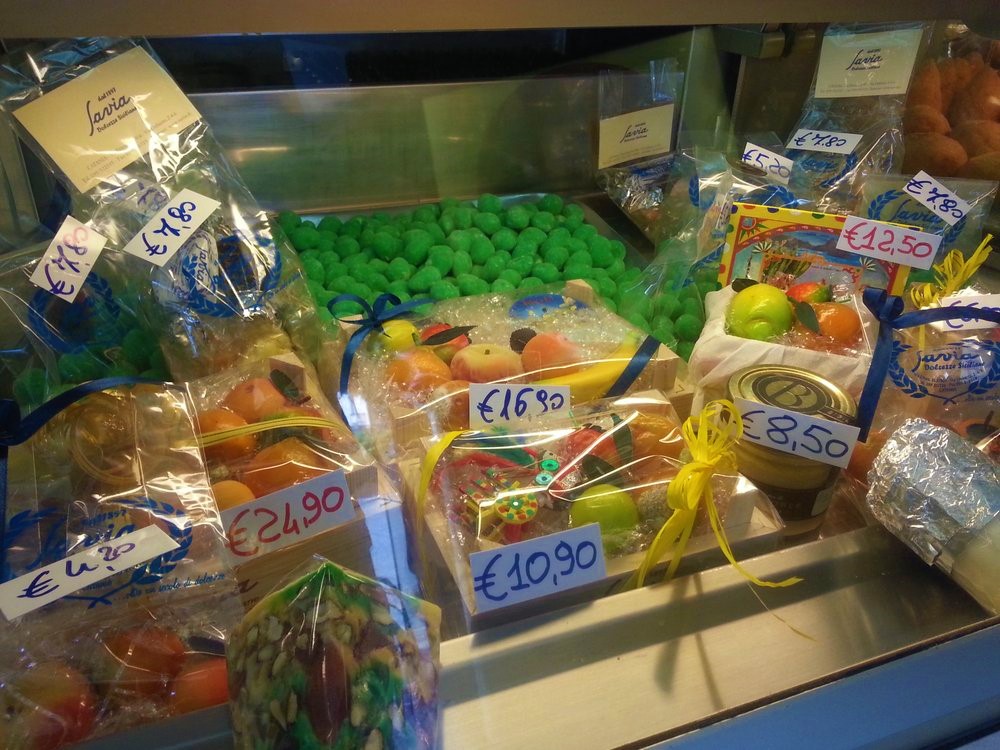 Part confectionery, part toy, the brilliantly realistic Frutta Martorana are faux fruits made from a marzipan paste which is fashioned into the shape of fresh produce, hand painted, and left to harden. Found all over Sicily, there are a few specialist vendors in the main Via Etnea in Catania. Gift boxes are available and they make a gorgeous present! Also look out for the local speciality, olive di Sant’Agata – bright green, sugared marzipan olives made for the feast of Saint Agata – as well as sugar-coated lambs produced for Easter.

The Italian cousin of peanut brittle, torrone from Catania doesn’t resemble the nougat-style sugar and nut bars you’ll find in Abruzzo or Piemonte. This is a tough-on-the-teeth version, with almonds and pistachio nuts fused together with darkly caramelised sugar. Go for an artisan slab of the stuff in a typical confectioners store, also available in many ice-cream parlours.

Where to eat: Pasticceria Signorello, Via 19° traversa 80, Etna Belpasso

Read next: Food in South Tyrol: 10 things to eat in Bolzano, Alto Adige