Gazometro38 is a bar and restaurant specialising in gourmet pizzas and cocktails, but also offering surprising depth across a menu which changes every four months, to take advantage of seasonal ingredients and add tasty new options for regular customers.

Located in a former industrial space on Rome’s via del Gazometro, in the city’s Ostiense district, the restaurant is emblematic of a neighbourhood which has shaken off its blue collar past and yet continues to pay homage to it with oversized bars and restaurants in post-industrial spaces, where exposed girders and reclaimed tables bring a reassuring air of familiarity.

The skyline is still dominated by rusting cranes and the vintage gasometer along the river bank, downstream from a period, iron bridge, but these elements – and the presence of the nearby University – give the area a young and edgy feel, populated by a young crowd.

Gazometro38 opened in May 2015 with a clear idea about creating a relaxing lounge space for aperitifs and after-dinner cocktails in low-slung sofas and armchairs, with the open-plan space broadening into a dimly lit restaurant area seating around 100 guests, with a focus on gourmet pizzas, but also offering pasta dishes from the Roman tradition and a small but interesting selection of alternative first and second courses for curious diners.

The food is accompanied by cocktails and a good wine list, with the only disappointing note the small selection of industrial beers. There is an unnamed seasonal beer available, which changes regularly, and this was happily an easy drinking white IPA which proved perfect paired with pizza.

After pausing for a nice, zingy Moscow Mule in the lounge area, we moved to our table and got stuck into the menu. I tried a great seasonal dish of creamed chick peas served with King prawns as a starter. The homely, velvety chick pea or garbanzo bean cream was studded with whole chick peas, and the prawns added a gourmet detail distinguished by subtle flavours that complimented the lightly seasoned chick peas well.

I couldn’t resist ordering a suppli as well –  a traditional Roman stuffed rice ball which Is filled with mozzarella, breaded and fried, before being served with a dusting of tart Roman pecorino cheese at the table. This satisfyingly oozed melted cheese when cut and would normally be the perfect entrée for a pizza dinner.

If you’re going to order pizza, which is probably the star of the show, diners can choose between classic pizzas and gourmet options. For classic pizzas, expect everything from a good value Marinara or Margherita starting at €6.50, through to Quatto Formaggi (€8), Quattro Stagioni (€7.50), Ortolana vegetable pizza (€8) or the Vesuviana (€9), bubbling with mozzarella, sausage, smoked provola cheese and leafy vegetable tops.

The gourmet pizzas include a delightfully imaginative selection, positively laden with ingredients, which distinguish the restaurant from other pizzerias in the neighbourhood and also in Rome. Of note are the Trevigiana (€9), with mozzarella, radicchio braised in red wine, mature gorgonzola and walnuts, or the Ostiense (€9), with buffalo mozzarella, broccoli and anchovies. 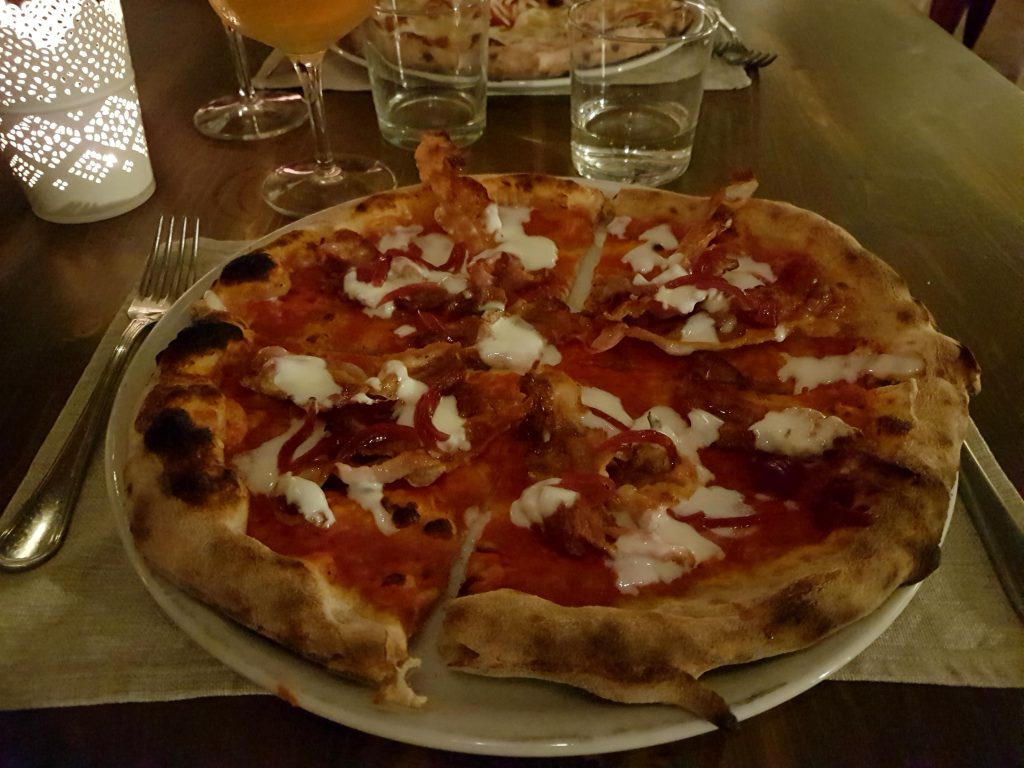 I chose the house pizza, the Amatriciana 38 (€10), which wows by combining the kind of ingredients you’d expect to find in the classic Italian pasta dish but adapting them to make a sensational pizza topping. So the tomato sauce has a lovely, deep smoked quality, topped with thin and crispy rashers of pancetta, with a pecorino cheese cream sauce drizzled over the top.

My dining companion chose the Cucuzza (€10), pictured below, with mozzarella, pumpkin puree, mature gorgonzola, sun-blushed cherry tomatoes and shavings of parmesan. They were both delicious. 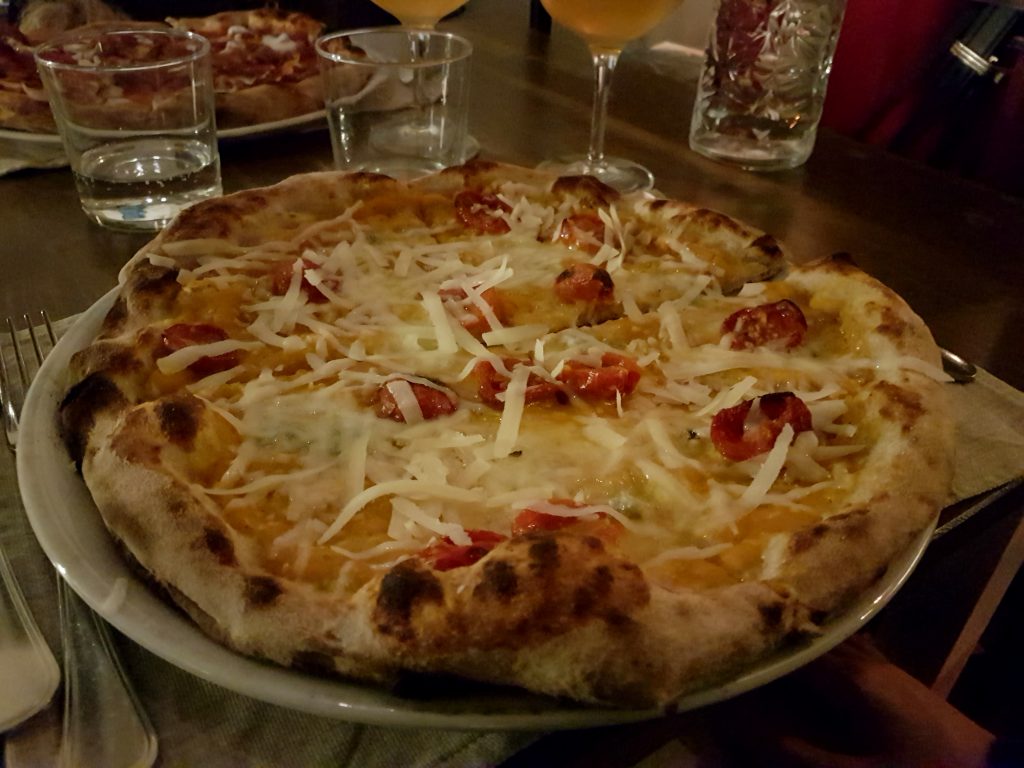 Gazometro38 changed pizza chefs around eight months ago, and it’s worth introducing Fabrizio Di Leginio and his methodology.

Di Leginio uses a percentage of type 2 flour, less refined than its 00 cousin, and also experiments with multi-grain mixes including farro, a heritage grain popular in Italy, measuring every dough mix scientifically to be able to reproduce his perfected recipe, which benefits from the simple addition of 2% oil and 1% salt – plus 70% water. 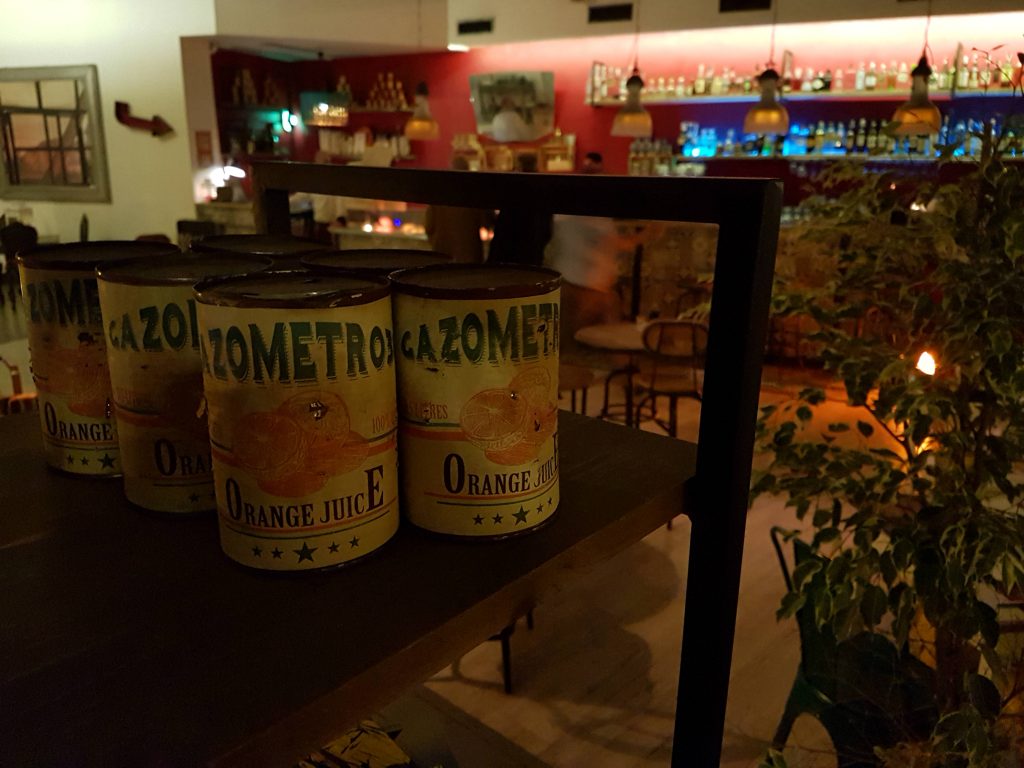 The dough is rested for 16 hours in the fridge and 17 hours out of it, creating a final pizza base which is incredibly light and easy to digest, but retains a satisfying chew, unlike many pizzas in Rome which are reduced to a purely crunchy, hard base. The multi-grain elements result in a darker and flavoursome dough, which never feels too dense or overdone in terms of its whole meal content. Cooked to perfection in just a few minutes in a wood-fired oven, service is rapid and attentive.

After our pizzas, we couldn’t resist trying dessert. I opted for a semifreddo with a hint of sambuca and honey, lavishly topped with dark chocolate sauce. 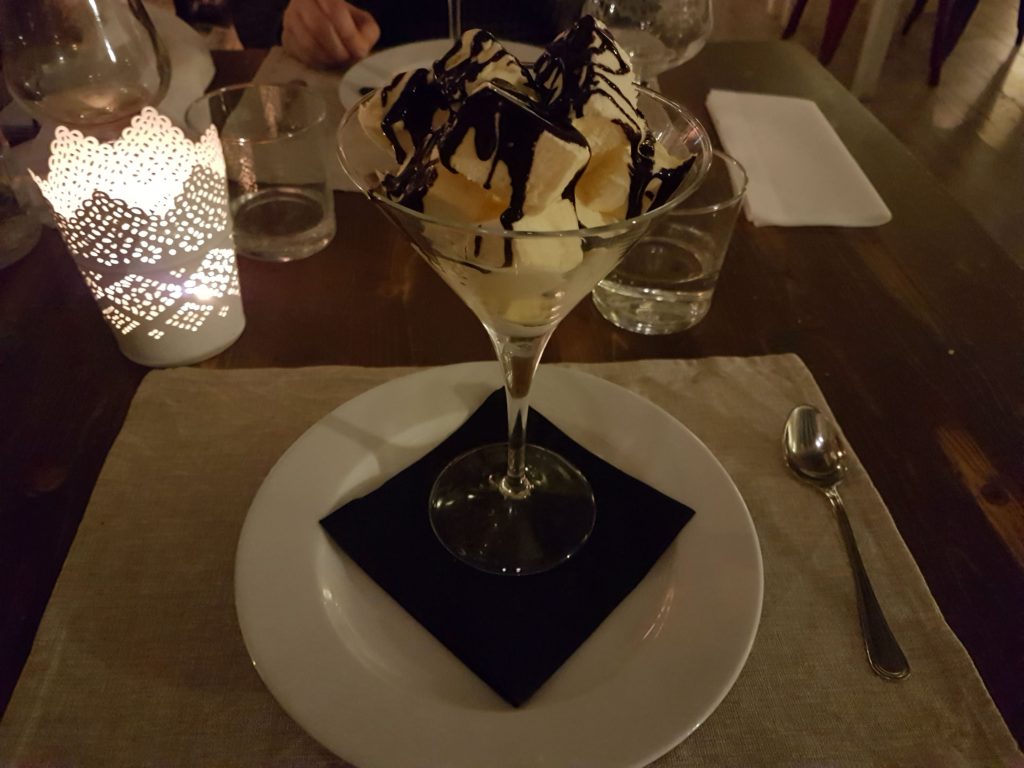 The other dessert option which caught our eye was a sorbet made with boozy coffee, pictured below. Another interesting dish – which I’ll come back for – was the Tiramisu made with Baileys. 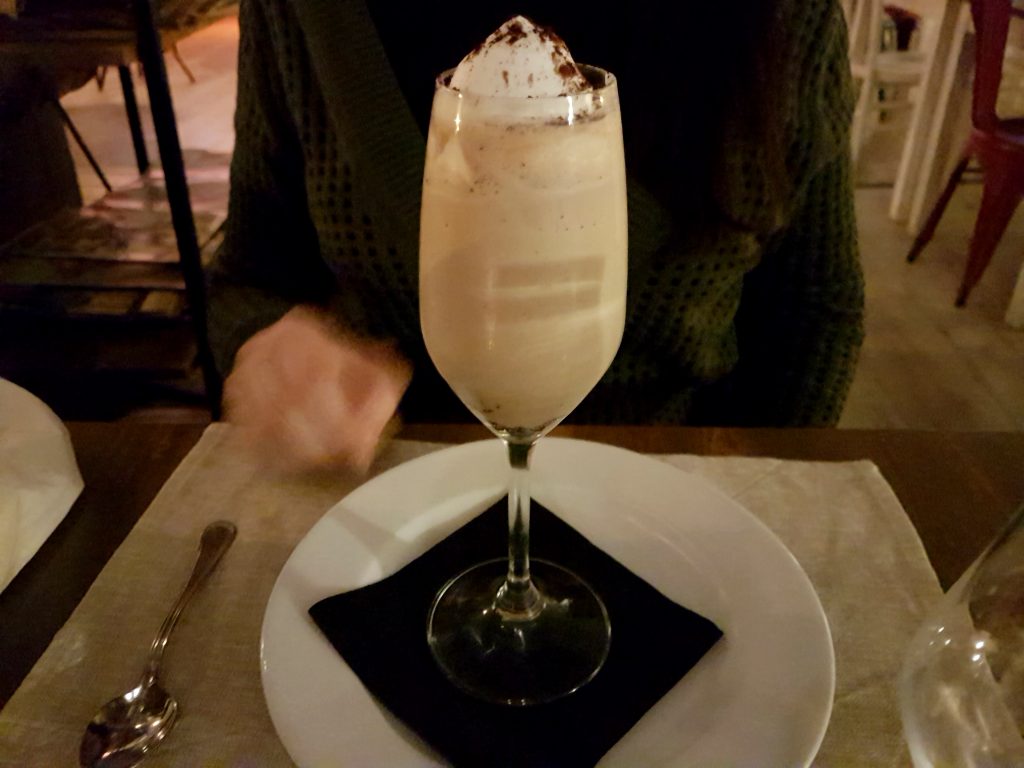 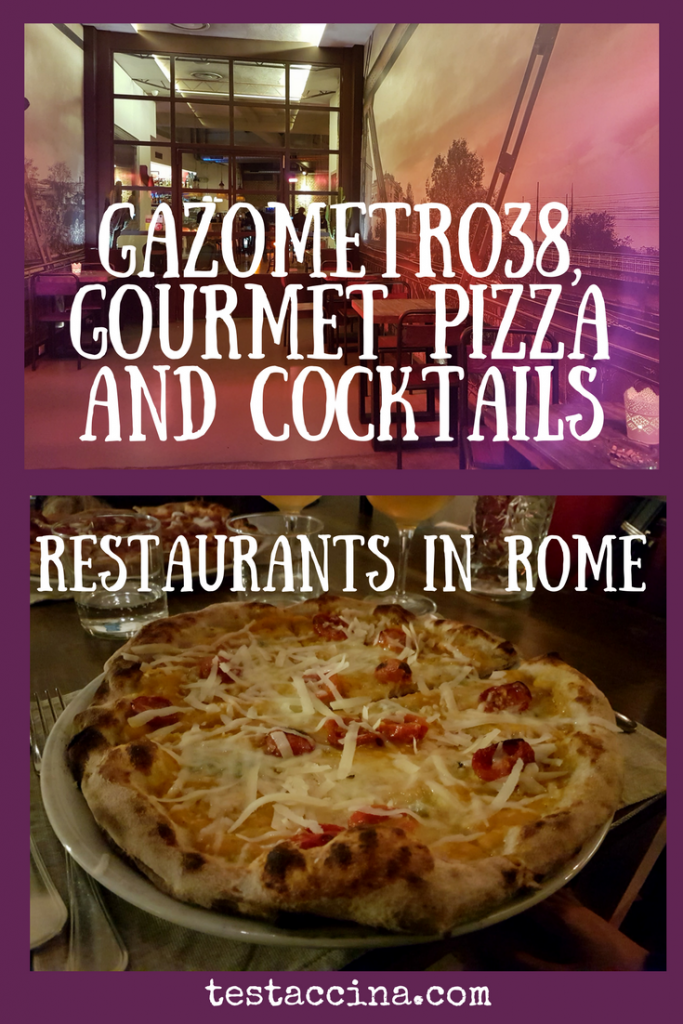 Even if you’ve been to Gazometro38 before, the restaurant’s commitment to refreshing its menu so regularly mean that this really is a pizzeria for all seasons, with a few perennial surprises to boot.

Apart from the aperitivo option, where you can virtually dine on a selection of snacks including bruschette and cold cuts for €10, drink included, you can also pop in to Gazometro38 for lunch, combining a starter, main course, water and coffee for €10, or a pizza plus a drink and a coffee for just €10 as well. Recommended.

Read next: Officina, pizza and burger in Appio Latino, Rome