Lunch in the Castelli Romani, including how to get to Ariccia and Frascati with public transport

If you’re looking for information on having lunch in the Castelli Romani, and more specifically, how to get to the towns of Frascati or Ariccia with public transport, you’ve come to the right place.

Visiting the Castelli Romani is not only an easy day trip from Rome, it’s an ideal location for a lunch outside Rome, returning the same afternoon.

Famed for its roast pork, or porchetta, a spit-roast pork flavoured with herbs, Ariccia is a fantastic, rustic destination for a lunch outside Rome which will enable you to escape the chaos of the city of Rome and enjoy a great value lunch in the Castelli Romani. 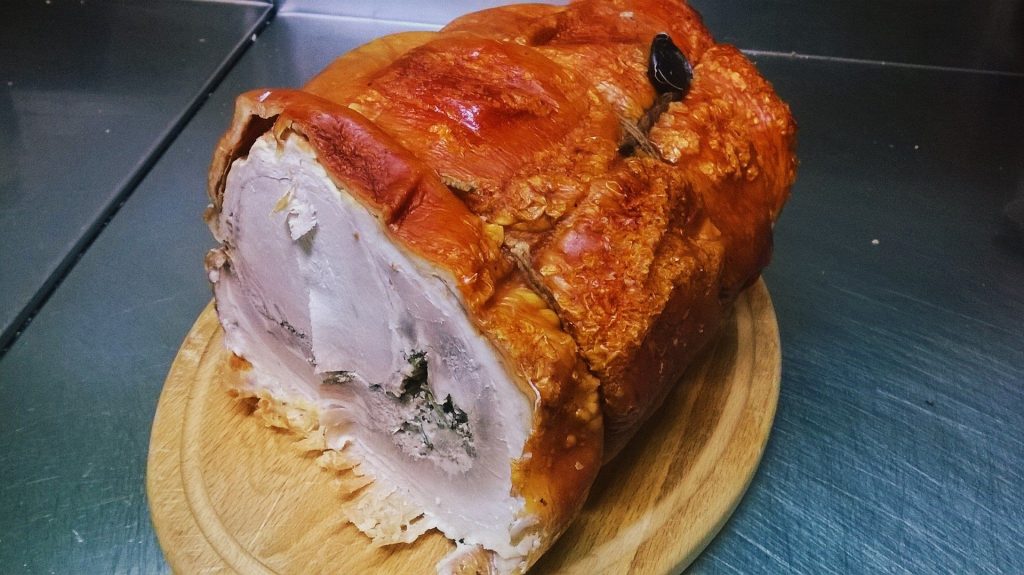 The famous porchetta from Ariccia

Frascati is an even easier destination for a day trip from Rome, as direct trains leave from Rome Termini to Frascati on a regular basis.

Read on for everything you need to know about planning lunch in the Castelli Romani, including my favourite restaurant in Ariccia and a full explanation of how to reach Ariccia with public transport. 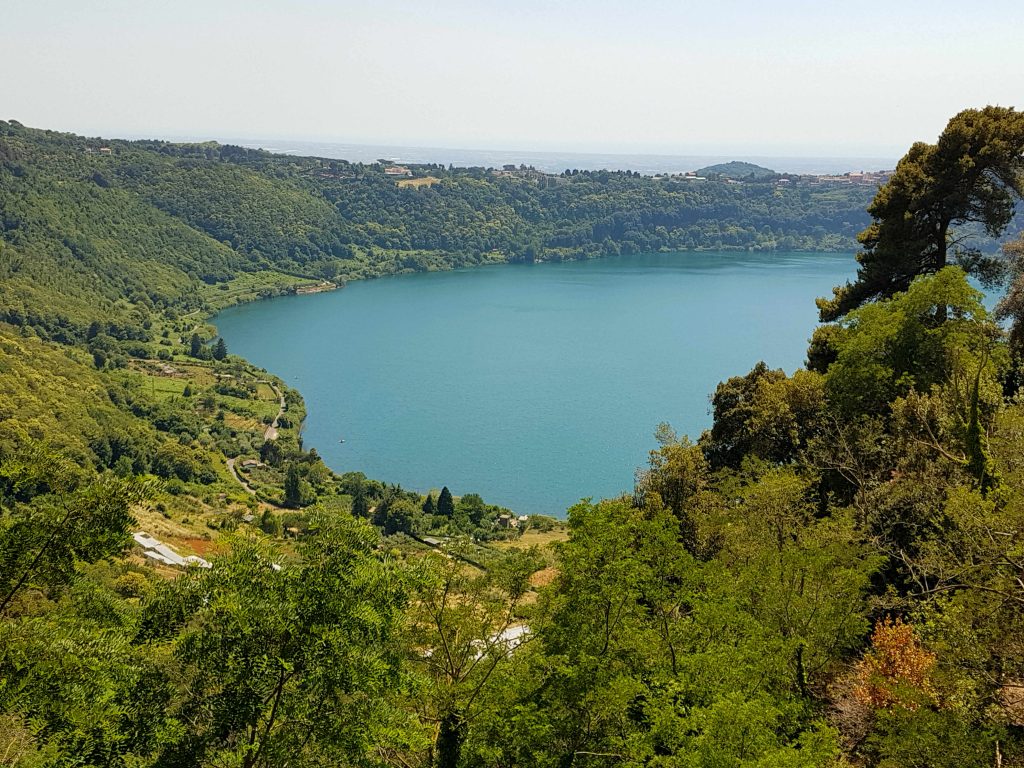 View of lake Nemi from the village of Nemi

The Castelli Romani (literally, Roman castles) is a region featuring a cluster of hilltop towns about 30 km south-east of the city of Rome. This collection of towns and villages is slightly misunderstood by tourists, and for good reason. First, there are no castles; you’d be hard-pushed to find even a medieval fortification amongst its vine-clad slopes and plunging valleys.

Secondly, the towns themselves range from not-worth-visiting high-streets dressed with dusty underwear shops and half-drawn shutters, to pretty rambling villages vaunting breathtaking views and an art for welcoming tourists. 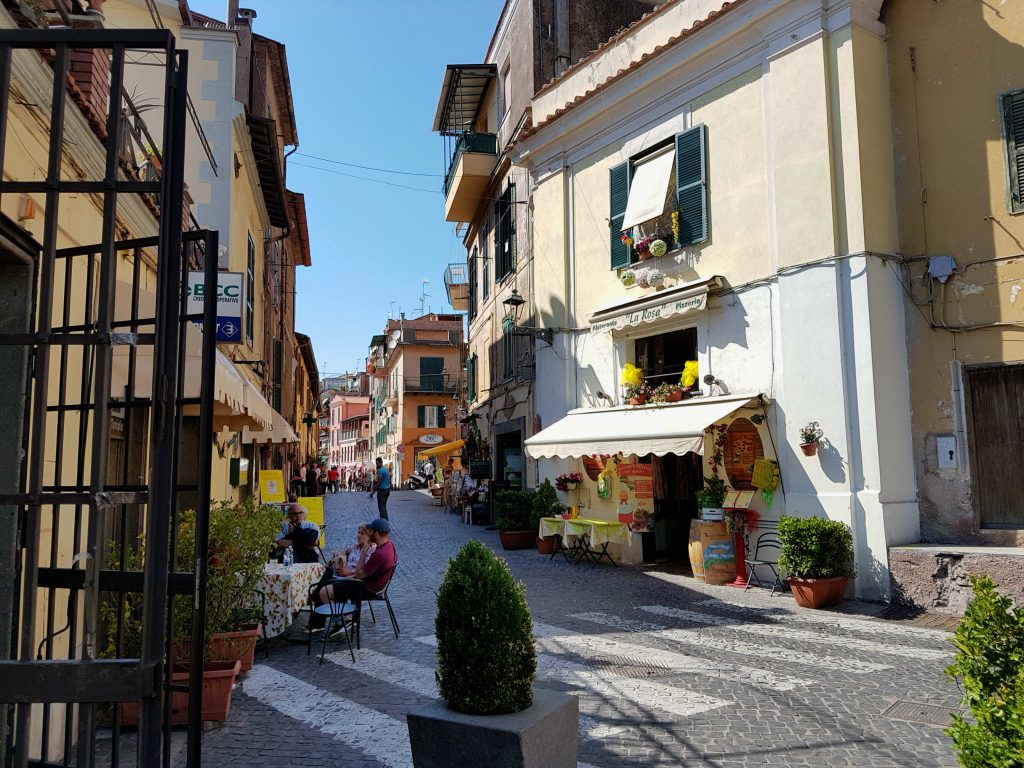 17 towns and villages make up the area, with the lowest-lying of them all, Ciampino, most famous for its cattle-shed airport and codependent relationship with Ryanair.

You’ve probably heard of Frascati as well, home of cheap plonk, aristocratic villas and, improbably, a cluster of scientific institutes.

Ariccia, on the other hand, is a pretty town the other side of a breathtaking viaduct which is famous for its spit-roast piglet. You’ll find plenty of food festivals going on here throughout the year, including food festivals or sagre dedicated to porchetta, as well as chestnuts, porcini mushrooms and wine, mostly in the autumn. 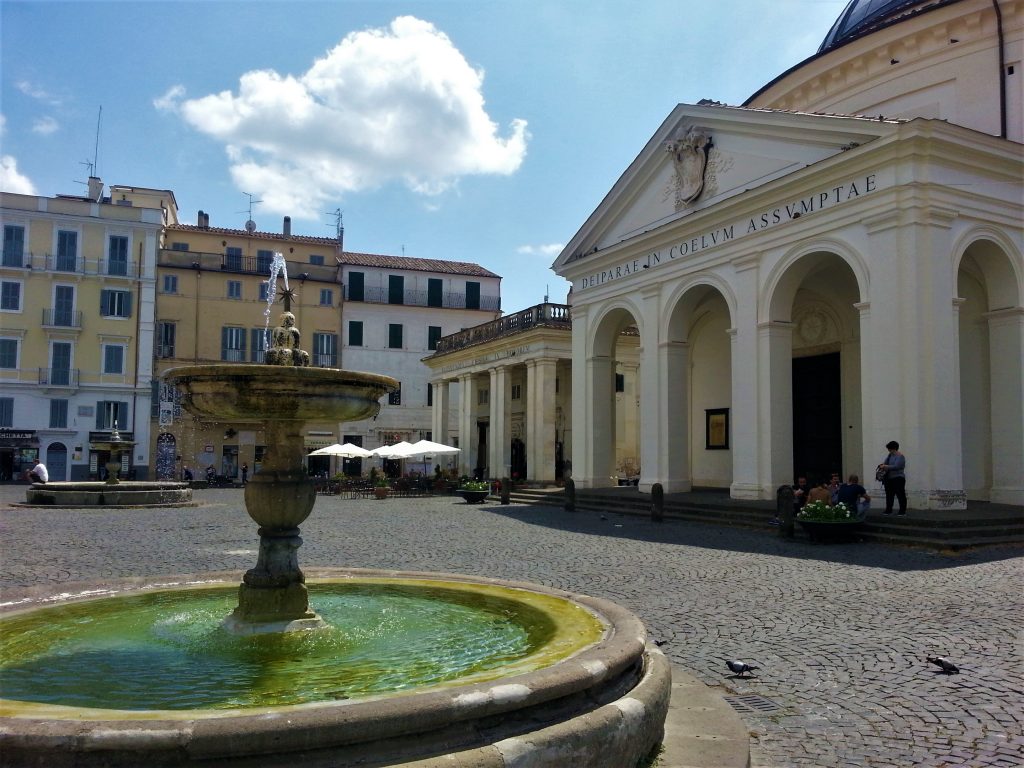 The town of Ariccia

The Pope’s summer residence is at Castel Gandolfo, a popular pilgrimage spot; and indeed, like the Pope, you’d probably be best off turning your attention to the Castelli Romani in late spring and early summer, as some of the highest towns have a microclimate all of their own, attracting relief rainfall when Rome is in blazing sunshine.

Monte Porzio Catone is one of the towns above Frascati, less visited by tourists but home to sensational wine estate Poggio le Volpi which is a great destination for lunch in the Castelli Romani. For my review of eating lunch at Epos Bistro at Poggio le Volpi, go here. 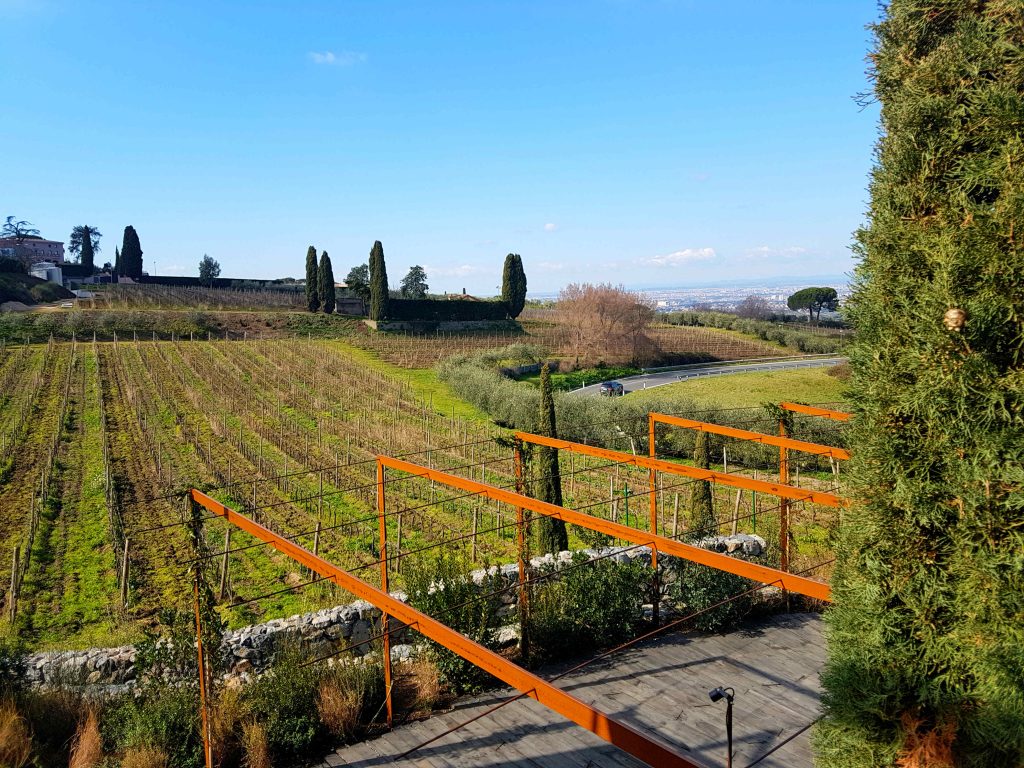 The Castelli Romani area bears testament to its volcanic past, with two dark lakes filling the ancient crater and grapes growing on fertile slopes, beneath the pretty towns of Nemi and Genzano. Privileged Romans have been retiring here for the summer since ancient times, and great villas dot the landscape, although many are twentieth century structures, attracting wedding receptions, christenings and confirmations. In the summer, the lakes come alive with bathers and pedalos; in the winter, they’re black holes reflecting the gloomy hills.

When should you visit the Castelli Romani?

The area’s micro-climate means that relief rainfall up in the hills can surprise the best prepared visitor to the Castelli Romani. Even in high summer, bring a jacket when visiting the Castelli Romani, or at least a cardigan, and carry waterproofs the rest of the year round.

April, May and June are a gorgeous time to make a day trip to the Castelli Romani, for lunch in the Castelli Romani, particularly visiting the towns of Frascati and Ariccia. The summer months of July and August can provide welcome relief from the heat of the summer, while the autumn may bring more changeable weather, but the presence of food festivals in many of the Castelli Romani towns in this period makes it a great choice for a day trip from Rome. 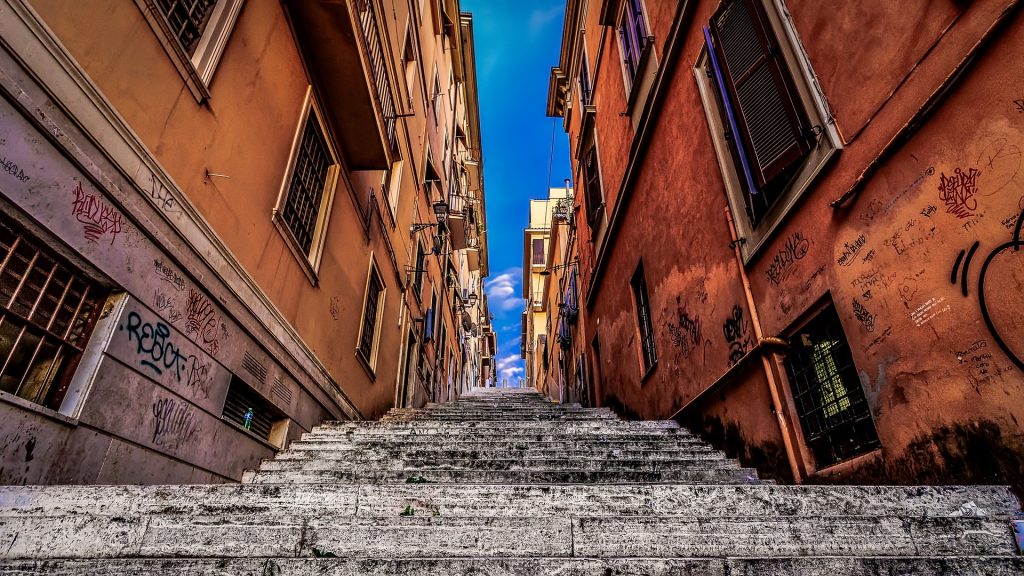 How to get to the Castelli Romani

The Castelli Romani are only 30 km from Rome’s heart, but they are not all equal in terms of accessibility. Read on for more information about getting to the Castelli Romani with private car or public transport.

How to get to the Castelli Romani by private vehicle

The Castelli Romani are not difficult to reach by car. It’s a straight stretch along the Appia Nuova; then just after Ciampino airport, turn left into the via dei Laghi and start the ascent. However, you’ll meet plenty of traffic on any pleasant weekend as families head for the hills for lunch. A great way to get there is by motorbike, and touring the Castelli Romani by motorbike not only means beating the traffic, but also avoiding parking problems in the towns of the Castelli Romani, a potentially challenging factor the whole year round. 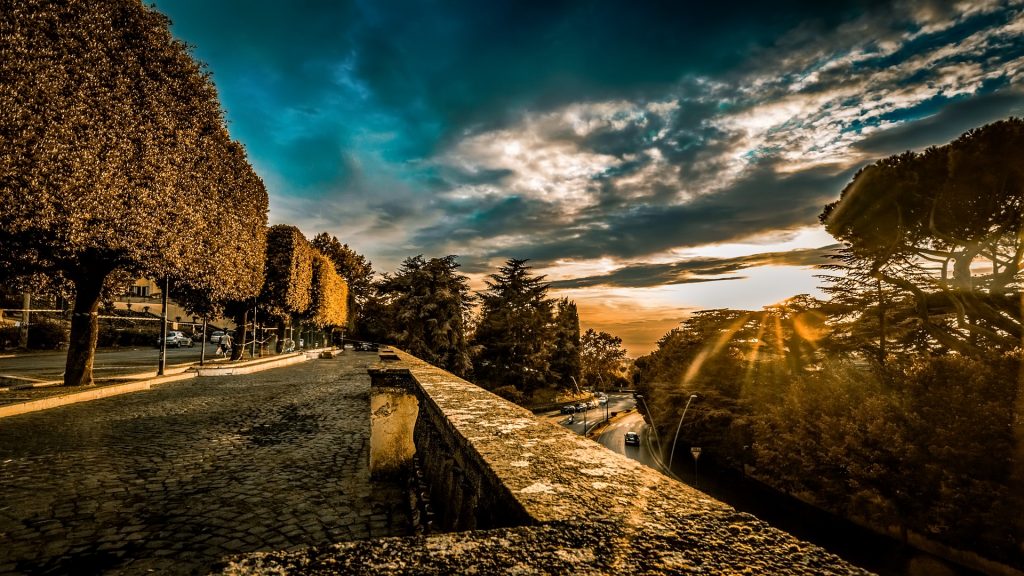 How to get to the Castelli Romani with public transport

The three main Castelli Romani towns on the train line from Rome’s Termini Station are Frascati, Castel Gandolfo, and Albano Laziale. These trains run on the hour Monday to Saturdays, but only every two hours on a Sunday. Expect to pay around €2.10 for a single. See the trenitalia website for full details.

How to get to Ariccia with public transport

Romans will tell you that you can’t get to Ariccia on public transport, but don’t listen to them. The trick for reaching Ariccia with public transport is not to take the complicated list of buses which google maps will suggest to you.

The best way to reach Ariccia by public transport, in fact, is to take the train from Termini – a slow train, allowing you to appreciate green meadows and vineyards en route – and get off at Albano Laziale, one of those aforementioned towns with dusty underwear shops and closed shutters.

It’s the last stop on the line, so you can’t go wrong, although the fact that it takes around 1 hour to travel 30 km may set your teeth on edge. Exit the station and clamber up broad stone steps to a busy road, curve left round the bend and then turn right and along the straight road to Ariccia. It’s then a 20 minute walk to Ariccia, taking you across a magnificent viaduct with views right over to the sea, perfect for whetting your appetite for the lunch that awaits you.

How to get to Nemi in the Castelli Romani

In case you do have a car, I’d add a brief alternative stop before this point: head anti-clockwise round lake Albano until you reach Nemi, the eponymous town above its own, smaller lake. One of the highest points in the Castelli Romani, Nemi has become associated with tiny, Alpine strawberries, fragoline, which feature heavily in its cuisine. As a pre-lunch aperitivo, order prosecco con fragoline (prosecco with wild strawberries) or take a strawberry tart away for later. 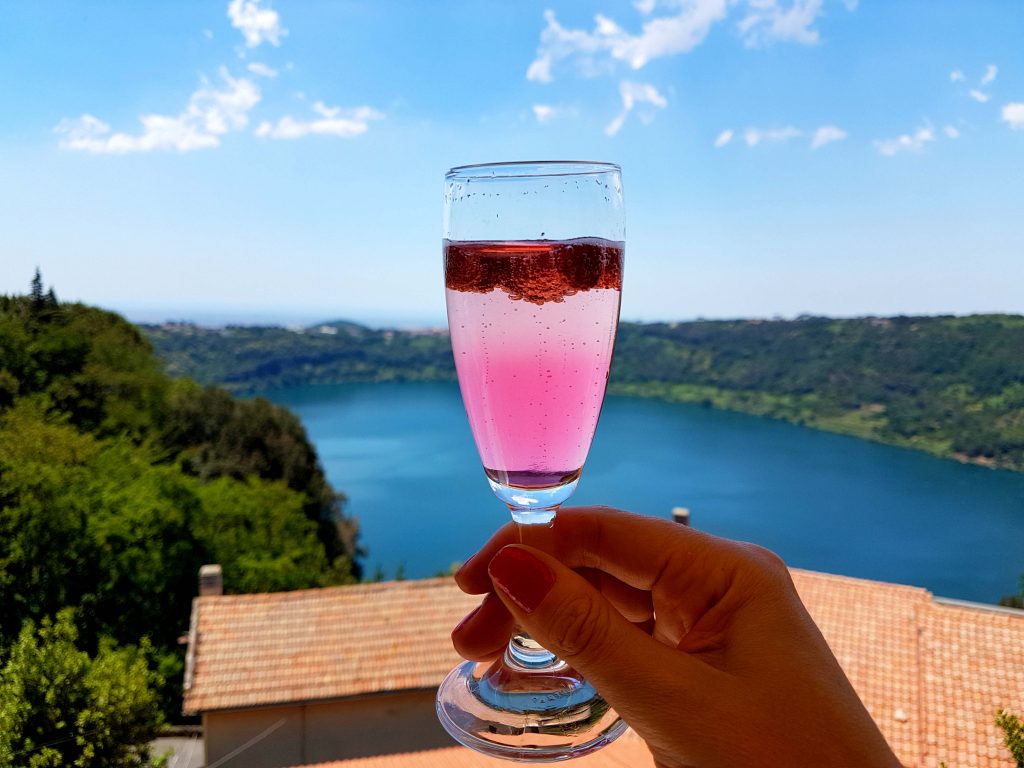 Drinking prosecco with strawberries in Nemi

Back to lunch in Ariccia – you mustn’t miss the fraschette, traditional restaurants that are only found in this region. They take their name from the town of Frascati’s ancient title, Frascata, which in turn finds its roots in the homes made out of branches (frasche) built by its indigenous wood dwellers. In later times, taverns would hang grape branches above the door as a sign that the latest vintage was ready, thus associating the word with local hospitality.

The main drag of the fraschette in Ariccia – head for Via Borgo S. Rocco − is a touristy affair these days, but still plenty of fun. Order abundant antipasti of prosciutto, porchetta, smoked cheese, bruschette, olives, dressed beans, salami and coppiette and see if you still have room for a rich, Roman pasta dish: amatriciana, carbonara, gricia or fagioli e cotiche (white beans cooked with pork rinds in a pungent tomato sauce). There are second courses fit for woodsmen, too, wild boar, steaks and sausage, all best washed down with litres of wine.

The white is sharp as a rusty saw and the colour of three-day old piss; a carafe of red, chilled and garnet coloured, goes down like a skewered pheasant. Just be careful they don’t stick a bottle of sweet, fizzy red on the table, a drink incomprehensibly favoured by the locals. My favourite fraschetta is La Fraschetta di Sora Ines, (the original one, not Sora Ines II) but they are all pretty good along Via Borgo S. Rocco. All that said, I’ll leave you to it. Told you it was a good idea to take public transport.

The essential guide to lunch in the Castelli Romani

How to reach Nemi: in a car from Rome, it’s basically two roads: the Appia Nuova and then the via dei Laghi (SS217) until you reach the turn-off for the town, the SP76a. It twists and turns a bit so make sure you don’t leave it too soon by accident.

How to reach Frascati: Frequent trains run from Roma Termini, costing €2.10 each way. The journey is around 30 minutes.

How to reach Ariccia: Easy peasy in a car, straight up the Appia Nuova from Rome, but be warned: parking is murder at weekends. Otherwise take the train from Termini to Albano Laziale (takes 52 minutes, tickets cost €2.10 each way) and try the pleasant 1.5 km walk to Ariccia.

How to reach Castel Gandolfo: Take the same train that goes to Albano Laziale, only get off two stations earlier.

Where to eat: I like Sora Ines on Via Borgo S. Rocco in Ariccia, where an order of abundant antipasti – upwards of 15 dishes − costs around €15 per head and leaves little or no room for any other food. The wine’s pretty good as well.

Where else to eat: For a sensational gourmet lunch and wine experience in the hills above Frascati, head for the Poggio di Volpi vineyard to dine in one of its two restaurants.

Tags:Ariccia, Castel Gandolfo, Castelli Romani, day out from Rome, eating, food, Frascati, fraschette, hills, how to get to ariccia, how to get to frascati, lunch, lunch in the castelli romani, nature, Pope, review, rome